Notable Zwift Events for the Weekend of October 2-3 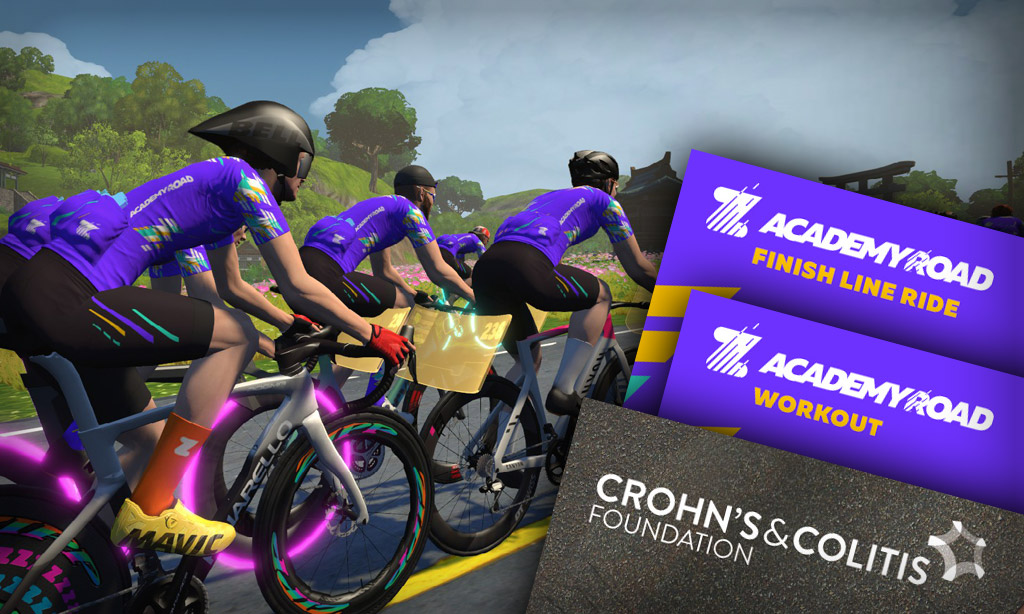 This weekend’s picks are a rather eclectic mix: two Zwift Academy events, a fundraiser/cause, and a very unique race competition. Dive in!

We have already reported about this event in detail (see Crohn’s & Colitis Foundation Rides Announced) and it’s certainly worthy event to attend and raise awareness and funds towards finding a cure for these painful and devastating diseases.

There are three events to try, starting on Friday. But the two for the weekend are as follows:

This session is going to be a tough one. I’ve been saving this for the weekend because the daunting description means once undertaken you certainly won’t be on top form for racing and a recovery day will be needed.

“This session has you performing 30min of work near your FTP. Starting the first set at a higher intensity means lactate levels will increase slightly at the beginning without time to fully clear. Conversely, starting easy in the last set before building the intensity towards the end means you’ll have to generate hard efforts after nearly 50min of work and cumulative fatigue. Tiring, we know. But totally worth it.”

For those who have completed Zwift Academy Road by undertaking the training independently, now is your chance to see how you have progressed by undertaking a Finish Line Ride.  Alternatively, given that some riders may have multiple workouts to complete and still plenty of time to train, this could actually be used as a checkpoint before embarking on the final weeks of intensive training before attempting a “final” Finish Line Ride.

The new routes are particularly good, especially the Climber’s Gambit.  It’s a nice change to have a mountaintop finish.

I came across this event by pure chance, and I think this would a great challenge to undertake.  Despite the event starting last weekend, there is still a chance to join in and catch up! The Invictus Games Foundation is coordinating a new virtual challenge following the route of the world’s most iconic cycle race – Tour de France. From 1200 (BST) Sunday 26th September to 1200 (BST) Sunday 17th October 2021, teams of 8 will have just three weeks to cover the 2124 miles / 3418 km route.

Participants have the choice of forming their own team of 8 cyclists or joining a Team Unconquered which are randomly selected teams with mixed nationalities, experience, and riding styles (upright/recumbent/hand/tricycle).

I appreciate you have missed a week, but consider it an extra challenge and one reminiscent of the old Tour de France where they cycled through the night, with spare tires on their backs!

I appreciate when you click the link to register for the Tour D’Invictus it says “Registration Closed” but I have emailed them to ask, but turnaround time says 3-5 working days days, so not had a response yet. Like I mentioned, I only came across this event by chance and would have been good to have promoted as it’s a great challenge for a great cause.

Thank you for these posts. How can I find out about events further out so I can train/taper and get time away from the family to do them with more notice? Is there anywhere that I can see what the main events will be in November or December yet? I know there’ll be something like the Tour de Zwift in mid Jan, but really I’d like to know with more certainty. For a real world event, I’d have identified it and entered at least 3 months out. There have been some great Zwift events that have been announced with only… Read more »