Boone’s C to B: An Update 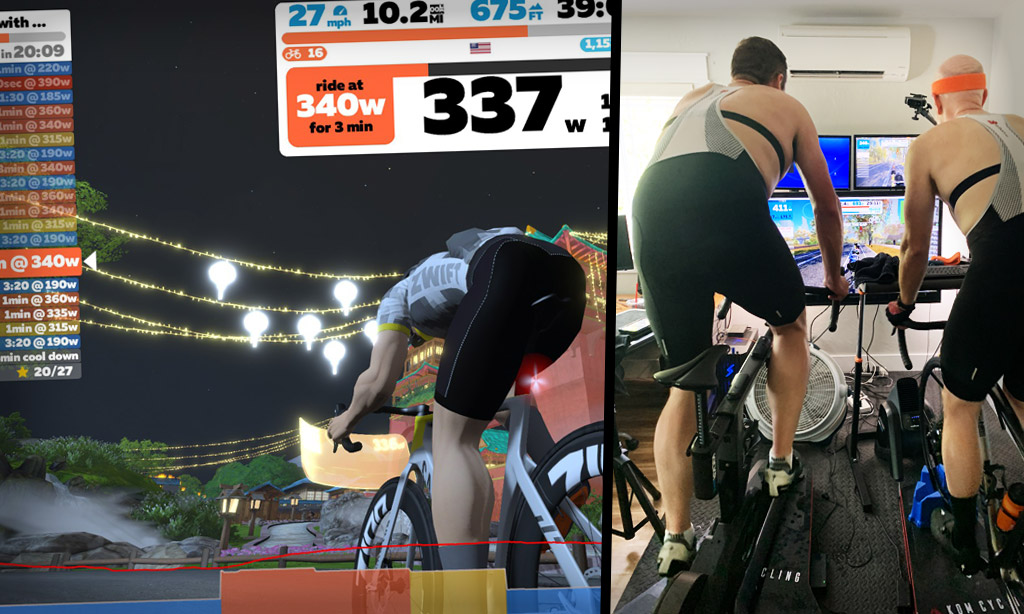 It’s been nearly a month since we last updated you on Boone’s “C to B” training project. In that previous post, Boone had hit the goal of C to B project, completing an FTP test that put him at 3.22w/kg. And we were asking the question: what next?

While we contemplated what our next goal should be, Boone kept riding, working hard at a mix of VO2 workouts, races, and steady 60-90 minute rides where he grabbed route badges while building endurance.

Our new goal for Boone is to see him upgraded to a B racer in ZwiftPower. In order to do that, he has to have three races where 95% of his 20-minute power averages out to 3.2w/kg+.

He’s also set a secondary goal of climbing Alpe du Zwift in 70 minutes. He’s climbed the mountain twice – 81 minutes the first time, 76 minutes the second time. Based on his current power numbers, though, we think he’s probably already able to do it in 70 if he paces it well.

Boone has been riding 4 days a week (M-W-F and typically a race on Sundays). We’ve settled on a mix of five different types of rides.

If you’ve followed Boone’s training progress, you’ll know he lost an astounding 50 pounds in his first few months of training, dropping from ~265 pounds to ~215. But since then, his weight has held quite steady.

This isn’t surprising – anyone who has lost significant weight will tell you that your body hits a point where the “easy weight” has come off, and the lifestyle changes that got you to this point aren’t enough to take you further. Boone is still determined to get down below 200#, but he’s still working to figure out how to make that happen.

One thing’s for sure, though: he’s enjoying the lighter weight. We played volleyball for the first time this year a few days ago, and he’s jumping higher, moving faster, and recovering quickly – a force to be reckoned with!

Boone’s Friday afternoon VO2 workouts have been his cornerstone “max effort” weekly ride. We’ve tweaked them as we’ve gone along, but essentially it’s a warmup followed by 5x 3-minute efforts at 110-115% of his FTP.

We’ve started mixing in some stepped intervals, so (for example) instead of 3 minutes at 340W we do 1 minute at 360W, 1 minute at 340W, 1 minute at 320W. Same average wattage over the 3 minutes, but you get the heart rate up quicker with the tough first minute, meaning your HR is in the VO2 range for more of the interval.

In the past three weeks we’ve ratcheted up his FTP setting from his old one (294W) to his new one (310W). Just last Friday he completed the workout at 310W – it put him right on the limit, but he did it! Even the lights and landscape of Zwift’s new Makuri Islands map couldn’t distract him from knocking out those final intervals.

For the past two Sundays, Boone has hopped into the 3R Gotham Grind Flat Race which happens at 2:05PM Pacific Time. We’ve been trying these races instead of his standard Crit City efforts for two reasons:

These races have been a lot of fun, and the two weeks’ results are remarkably similar. In both weeks Boone hung with the front pack for most of the first lap, then fell off into a small chase group of 5-8 riders which finished next behind the front group. In both weeks, all of the C’s except for Boone got dropped early on, so he was in the chase group with A’s and B’s. And he finished well ahead of the next C.

The only downside of this race even is that it isn’t well-attended, with only around 15 riders from each category showing up. It would be nice to get more C’s in the mix, so Boone has more competition on ZwiftPower! But for now, it’s working out well – he’s received around 25 ranking points in each race, since he’s beating some B and A riders each week.

This past Sunday I joined Boone in the race. I raced as a B, Boone as a C, but I was there just to work as a domestique for him, to help him get the best result possible. So I was calling out moves, chasing down attacks here and there, and dropping back to give Boone a while if he was gapped a bit.

He held his own mostly, and in reality probably would have achieved the same result without my help. But it was really fun to work as his sidekick and actually race together for the first time. We’ll be doing more of this for sure.

Boone is clearly getting stronger week by week, even if he isn’t getting lighter. When it comes to races without long climbs, he’s definitely a “strong C” at this point, although it’ll take a significant jump in fitness to get upgraded on ZwiftPower.

He’ll keep plugging away at the weekly training, then we’ll probably jump into some mixed-category Crit City 8-lap races where he can hopefully set some new 20-minute PB’s to get him upgraded to B status. Because Zwift racers know, if you’re looking to cat up, Crit City is the place to do it!

Got ideas for Boone, or questions about his training? Comment below!

Any plans to increase the volume? I would guess 4h a week won’t be sufficient forever.

He’s been doing more 90-minute rides lately, so his weekly volume is more like 6-7 hours lately. Not sure if he’s going to push much beyond that – he’d rather be outside hunting or building his house! ﻿😀﻿

@Boone The Wringer awaits you ;D

The Japan Zwift Tuesday races are also mixed category starts with decent turnouts, as are the 3R Volcano circuit races on Tuesday/Thursday. I have also found the C category Herd Summer Racing League on Saturdays to be some of the hardest C races I’ve ever done, the points structure really rewards hard racing and they choose an interesting variety of courses.

Always love these updates.
But purposely dropping to help lower category riders is a serious no-go in case of fair play.

Really? I never even considered that people would think that’s unfair.

In an outdoor race, sure – but everyone knows categories aren’t supposed to interact outdoors. There are rules against it.

On Zwift, though, if all the categories start together and can see each other, I think riders should be allowed to interact however they see fit. Partly because there’s no way to police it!

But I’m open to hearing other people’s views on the subject.

you are deliberately interfering with a lower cat.. thats whats not cool about it

During the race, EVERYONE is interfering with everyone else though, Dan! That’s the point… it’s a mixed-cat race. Seems to me, if it wasn’t OK to interfere with other categories… there wouldn’t be mixed cat races. I’ve done outdoor road races where they combined two categories, say the 3/4, into one field. Those riders interact (you don’t really know who is who anyway) and there’s no problem. Heck, it’s like the standard P/1/2 race here in the US. Are the 1s not supposed to influence the race for the 2s? Now, if it was two different fields that started at… Read more »

The thing is, though, he wasn’t really helping Boone at all! Boone finished only 15 seconds behind Eric, and Eric came third in his race. In the article, he even said that Boone could have managed on his own.

It’s a mixed category race with the same start for all categories. Everybody is racing each other. If a C managed to win, the C wins the entire race as well as category. If A’s get dropped from the lead group and are in with mostly B’s and C’s those A’s are racing the B’s and C’s for position and any mix of A’s could be working with B’s could be working with C’s – or against each other. I was in this particular race and think it’s great that B’s and C’s (Eric and Boone + a couple others… Read more »

MIXED cat is all riders visible; C isnt racing against B and A isnt racing against D.. otherwise the results wouldnt look like they ARE; A, B, C, and D are separate. Sure you can get in with other groups and race as hard as you can.. BUT your admitted you hung back to aid a lower cat guy do better… why is he just NOT in B with you if that’s the case. you are interfering with the results of other C riders who were challenging Boone. You know this, and “were open to hear other views”

Ohhh… you’re right! I’m not Eric though. I was in the A race and just thought it was good stuff with the B’s and C’s who were helping each other stay with us for as long as they could. Hmm, I still don’t know about policing or controlling this as the set-up by default allows mixed cat collaboration. Like for example if a B is able to hang onto an A break only by nearly dying and because the A’s decide to take pity on him and ride easier, is that unfairly influencing the B results when the B wins… Read more »

Eric,
These updates are by far the most exciting thing to read here. Boones progress is very inspiring and would love to race with him as a fellow C cat if our paths cross. I checked out his power curve, which favors FTP riding. If I may suggest, mixing in some sprint workouts to improve his 15 sec power might supplement his current workout regimen quite nicely. Also, 3R Classique Flat Race usually has good attendance both from B and C groups.

newbie gains are over, now the REAL training begins 😀
honestly, there should be no rush to get to Cat B. he’ll be stuck at the back of B for a fairly long time, so might as well have some fun battling at the front of C while it lasts 😉 you can learn a LOT more about race tactics from the front than the back..!
p.s. if Boone breaks a sub-60min Alpe time before me, ima be mad, as I had a huge head start on him :DDD sub-70min is definitely doable, almost setting the bar too low..!

I agree about rushing upgrade into Cat B. I find that jump from C to B to be really difficult if not completely discouraging. You can place top 3 in smaller Cat C races and then get dropped in the first 5 mins in a B race.

I would recommend joining larger Cat C races first, then just trying to hang in cat B races as an objective goal. So stay in the race for 5-10 mins, 10-15 mins, and 15-20 mins. Just finish…

You could have replaced Boone’s name with mine and this article would have mirrored my story to a tee! From the C to B goals, weight goals, Zwift Power rankings, w/kg, race strategies, etc. I appreciate the program recommendations, gives me some things to think about mixing into my program.

Any more updates coming from Boone? I need to know if I’m managing to keep ahead of him as I’m improving my w/kg!