The Big League Call Up: My First Impressions of the Premier League 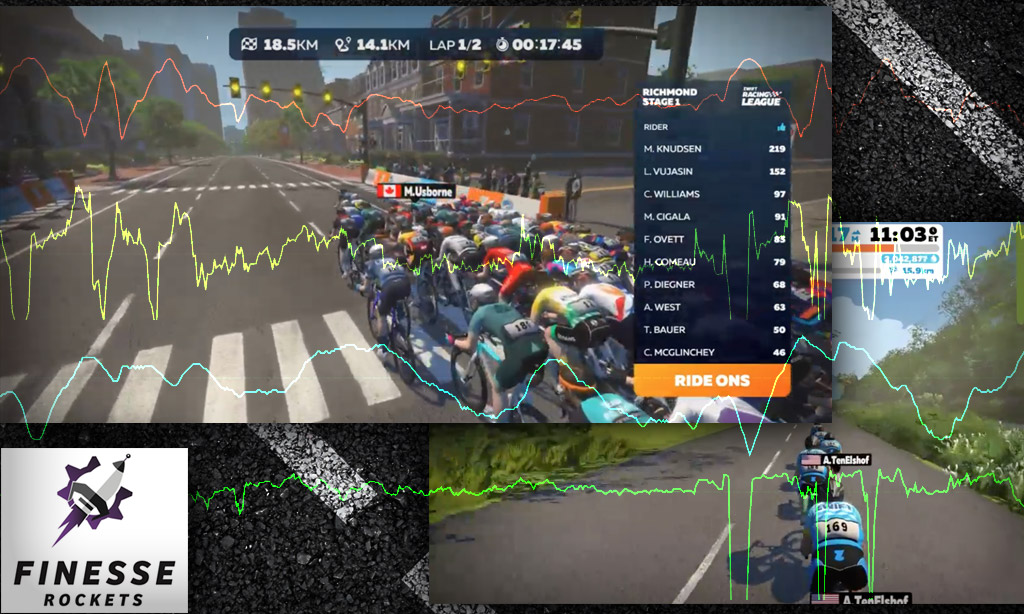 The Crush of Speed

It was different from the first dash out of the pens. It was more horsepower from more big engines roaring to the rev limiter from the opening meters. I quickly realized I wouldn’t be getting a sniff of any of the KOM points I had considered targeting on the opening climb only 3 minutes into the Reverse Richmond course. The speed was too high and while I scrabbled towards the fore at 10 w/kg, the real puncheurs took off for the line and the bonus points at 12-14 w/kg.

For the next 10 minutes it was like being tossed around in a washing machine full of rocks, moving from the front to the back and up again and taking hits all along the way in the form of surges into the “orange numbers” of 8w/kg+. It was my first race in the Premier League with the newly upgraded Finesse Rockets team and in the words of Dave Towle “It was on like Donkey Kong”.

The pace eventually settled slightly and more importantly I started to find the rhythm of riding in the faster pack and conserving energy where I could. You can never lose focus though – it will cost you. I have felt this strangling level of baseline speed before in the real world at the World Tour races in Quebec. It is like driving along the highway at 120kmh: you know you are moving fast but you are under control. But, if you open the window though and slide your hand out into the open air you feel the real weight of the resistance you are up against. You know you can only brave that crush for a short time before crumpling and that you had better stay inside the draft as well as you possibly can.

I couldn’t be of much use on the KOM or points sprints, my power profile will never be sharp enough for that. So I switched to plan B: a late attack. This tactic became more clear-cut when we lost our sprinter to the infernal pace and another fast finisher to an Internet dropout.

I was never going to sprint into the top 30 in the final to get league points so there was nothing to lose. With an attack at least there was the potential of drawing out other riders and either making a go for the line or at least allowing my teammates a free ride while other teams responded.

With around 4km to go and directly after the last points sprint of the race I hit out. The pack was already stretched by the acceleration of the sprint and I figured I could capitalize on that. I hit my aero powerup and within a few hundred meters I was in clean air.

The problem was I was alone.

The pack watched and I cranked away at 7-8 w/kg to establish and hold a 6-7 second gap. There was no going back though, no point in regrouping to sprint for 50th, so I kept going and hoped for either a reaction or a moment of hesitation. 3km left, 2km then 1km and the finish line in the distance. I began to think “if I get to 500m I can kick one more time”… and then they were there, rushing past with 700m to go. I limped home, our sprinters sprinted and that was the end of my first Premier League race. I was empty but I was smiling, I came for a hard race and I got it.

It was a tough outing for the team on that first event. We scraped together a few points in the sprint with Matt Usborne and Timmy Bauer but finished well down the order. That’s fine though, a learning curve is expected and we have already bettered our season position by finishing 8th in this week’s TTT of the 21 teams.

After so much anticipation and hard work to get to this level I definitely had some thoughts after our first outings.

More than anything, I am struck by the scale of it all. Even on a Monday, over 24,000 people watched that first event live, and more people were cheering on my solo effort than at almost any IRL race on the North American calendar. It’s a big opportunity for all of us and I am grateful for that.

It does make me wonder why there isn’t more aggression in the men’s field even if it has a low chance of succeeding due to the blob physics. I didn’t make my move for TV time, I made it based on game theory (and limited options therein!) but I sure got some of the former. It’s striking that teams and riders don’t try attacks more often if only for entertainment and a small chance at glory. Points are important, but entertainment and exposure are too. The entire field is looking for sponsorship, and sponsors love that stuff.

The women’s field, to their credit, seem to take on these attacking tactics more readily. It makes for an exciting final product.

Maybe we will see a little less of the “conserve, optimize, and sprint” game as this season goes on. It’s not that I don’t respect that approach, or even that I want racing that gives me more chances to win – I just think the sport benefits from an unpredictable racing narrative.

To that end, Zwift Racing League Season 2 has a calendar of courses that are undoubtedly harder and less predictable than Season 1. There is even a mountaintop finish next week where hopefully I will be the one sitting in for the finale and others will be going off the front to try to steal the show. Maybe the same top riders will still win on these courses too, but it should show off their power in a more compelling way.

Overall, I am excited to be a part of it. It’s a unique situation to be competing at the top of a sport that is still evolving so quickly. We will all need to analyze and adapt while staying at our physical peaks and still taking on as much suffering as we are capable of. Sounds like fun to me.

It was a brave attack; even if you didn’t do it for the glory or ultimately succeed. Many of the 24,000 who watched were impressed by your endeavor and it definitely added some much needed drama to the event.

Thanks mate, Im glad you could watch 🙂

There are levels to this, my goodness

An amateur A racer

The announcers didn’t know how to pronounce your name–bet they ask how now! I know some will use your effort as an example of “one that didn’t work”, but it takes guts (and other body parts) to attack like that. Salut!

I was watching that race live and willing you to hold on for one final attempt at a last gasp sprint to hold off the chasing pack, was a shame you didn’t quite get close enough before they caught, but it certainly made for an exciting watchable finish to a fast race that had been lacking a little unpredictability up to that point – good luck in Innsbruck!

Great article Jordan. Its always fun to read how another racer sees the race. From my point of view there are several reasons why attacking isn’t done that often here in the ZRL. The blob as you mentioned is of course the big one, since the lack of braking and the constant cycle of riders through the front of the pack keeps the speed too high. Another is the way the points are set up. The 20, 19 18 … points awarded in the overall gc keeps it close but also means that one fuck up can cost the strong… Read more »