Story of a Rare B Race Win 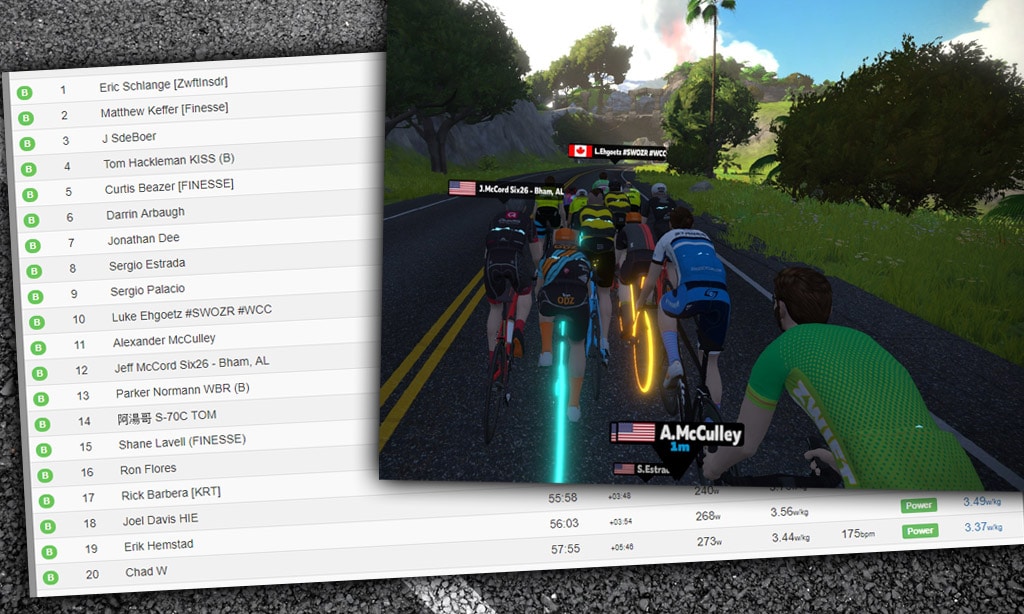 I just won a Zwift race, but going into the final kilometers I didn’t even think I’d make it onto the podium. The moral of the story? Never give up.

When the weather is favorable and daylight abounds my Tuesday nights are reserved for the Pain Train, an outdoor race-pace ride with a small yet dedicated group of strong local riders. But daylight is scarce and temperatures have dropped so I’m indoors Tuesday nights for Zwift, where I’m a regular at the 5:15 PST KISS Americas PM race.

This week’s race prep began just like any other week: about half an hour before the race I rub PR Lotion into my legs, chew a piece of caffeinated gum, and hop on Zwift to warm up. I don’t worry too much about grabbing a powerup before the race, but if I happen to have a useful one when I enter the pens I consider it a nice bonus. Tonight I’m holding a feather, which is handy since we’re on Watopia Hilly Reverse.

Before Ocean Blvd, before the Epic KOM, Volcano, Mayan jungle or the Alpe, all we had was the Watopia Hilly route. And it’s a good one, with a nice mix of climbing, rollers and flat sections.

It’s been a while since I raced up the forward KOM, where I tend to get dropped by the skinny guys because it’s just long and steep enough that gravity has its way and I’m off the back with the other “overmuscled” cyclists. Fortunately today we’re on the reverse route, which means the climb section is a short steep effort followed by a few minutes at a lesser grade. If I can hang with the pack up the first little kicker past the statues, I can usually hang to the KOM banner. And if I can hang to the KOM banner, I can hang through the entire route, just as long as I pay attention and don’t let gaps open on the Esses.

Four laps. I turn on the racing playlist. Let’s rock!

Today’s race begins like most Zwift races: push hard for a couple minutes, and if you aren’t warmed up you’ll really be hurting. The pack of ~40 knows the breaks will happen on the KOM, so the pace isn’t too crazy as we head over the Esses and through the village. And even though I am warmed up, I still find myself playing a little catchup as we hit the rollers outside of the Italian village just before the KOM. For whatever reason this section always surprises me, but this isn’t a double draft race so rejoining the pack is doable.

Lots of familiar names in tonight’s race, which is one reason I like to race the same event each week: you get to know the regulars. Curtis Beazer, Jonathan Dee, Rick Barbera, Sergio Palacio, Alexander McCulley… all strong riders who I’ll probably be battling against at the very end, if I hold on that long.

You know a short climb is coming when everyone tries to move to the front, and that’s what happens as we hit the 360 Bridge. Unfortunately, on Zwift this just means the whole pack gets faster as riders repeatedly ride through each other. I just stay in the draft and wait for the climb.

Our leading pack of B’s flies past Hank’s and starts the reverse KOM. <spacebar> activates the feather powerup and I’m hammering at the front. Crap, the feather only lasts 15 seconds. It’s gone before we hit the steepest section. Mental note: time your feather better next time.

I get gapped a little after the first kicker, so I hammer to grab a wheel then sit in and keep my effort as low as possible for the duration of the KOM. Because suffering. We’re not even to the top of the first KOM and I’m already wondering if I can maintain this pace for 3 more laps. Is everyone else thinking the same thing? I hope so. This happens every. Single. Race. I’ve learned that yes, I can endure. The only way forward is to remind myself of this and keep pushing.

Lap two is unremarkable, except that I score another feather powerup and use it to perfection this time around.

I also stay seated at the beginning of the KOM and it feels easier than the previous standing effort, probably because this is the first race with my new Wahoo Climb and I keep turning my handlebars when I’m out of the saddle. Staying seated eliminates that distraction, but I’ll need to work on standing with the Climb. Because standing (with a rocker plate) feels great!

Lap three is more of the same… including another feather powerup. The Zwift gods have smiled upon me this night. I head into lap four knowing I can finish the race at this pace. The only question is: how hard will the last KOM be?

Bad news: despite my pleading prayers through the last three banners I have no feather heading into the final KOM. Our lead group of ~15 crosses the KOM start line and despite my hammering attempts to stay near the front we’ve got some power-to-weight beasts going into orange numbers and getting away. I find myself in a small pack chasing three strung-out climbers up the remainder of the KOM.

I’m near the back of our group, and the lead rider is a good 10 seconds ahead. I figure I’m not catching any of the three off the front, but I decide to stand up and hammer to the top anyway. My group grabs my wheel and up we go.

Cresting the final KOM, our group is strung out and I (black circle) am several seconds behind the leader (image from Strava flyby)

We crest the hill together and keep hammering, knowing we have the aero advantage on the descent. As we fly downhill I see the gaps closing quickly to the riders off the front. The lightweights are slowing! My glycogen-depleted brain finally grasps what’s going on… we’re going to catch them—this is going to come together!

The front B’s cross the bridge and are back together on the flat heading into the final sprint. With less than a kilometer to go I’m wondering… who still has legs? Who has an aero powerup? My legs aren’t feeling great, and the powerup gods have withheld their favor. But it’s go time. I decide to stand up and start hammering a surprise-attempt early sprint to gap any aero helmets, and within a few seconds I find myself in front with less than 10 seconds to go. This is not where I want to be. But it’s too late to sit up and grab a draft, so I give it everything I’ve got, convinced I’ll see someone come around.

But nobody does. My surprise attack works… and I’m as surprised as everyone else.

My 13-year-old son was watching the final minutes of the race. The last race he watched (months ago) I also won. He’s not sure at this point whether I win all the time or he’s my good luck charm. I assure him it’s the latter, and definitely not the former. This is only my third win in 75+ races! But it still feels great, so I head upstairs to celebrate with my podium-girl wife.

It’s true many cyclists don’t take Zwift racing seriously. On the other hand: many do. I’m one who does. I find the competition just as fierce and the experience just as rewarding as outdoor racing. So I will continue to turn myself inside-out on a regular basis, knowing my chances of winning are slim but always hoping and suffering for a shot at the podium.

When it comes to bike racing, you win even when you lose. And those rare days when you finish on top become vital memories to drive you forward from every start line. So ride on!

See my race on Strava >