Here’s what happened at the NYC Zwift Run launch

Zwift announced Zwift Run to the world at an event in New York City last Thursday. Held at “fitness incubator” PROJECT in SoHo, the event was designed to showcase Zwift Run to fitness media and expose fitness equipment partners to the Zwift community. Here’s how the night unfolded from my perspective… 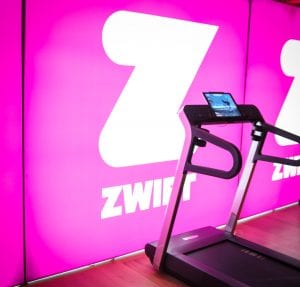 The first thing I noticed after walking through the door was the giant pink Zwift lightbox. Pink: it’s the new orange. But not really. Zwift’s marketing team is using the color to differentiate Zwift Run from Zwift Ride, though, and you’ll see this color used in all Zwift Run materials.

Strolling past the signup table I spotted Zwift CEO Eric Min intently studying some notes, while Game Master Jon Mayfield looked on and chatted with Zwift staffers. Even though I’ve communicated quite a bit with both of these guys via email or private messages, I hadn’t met either in person.

When I introduced myself to Eric and Jon they were both pleasantly surprised that I had made the trip out from California for this event. (Honestly, I had questioned my sanity a bit as well as I left sunny Northern California and stepped off the plane in NYC where the high temperature for the day was 32 °F!) 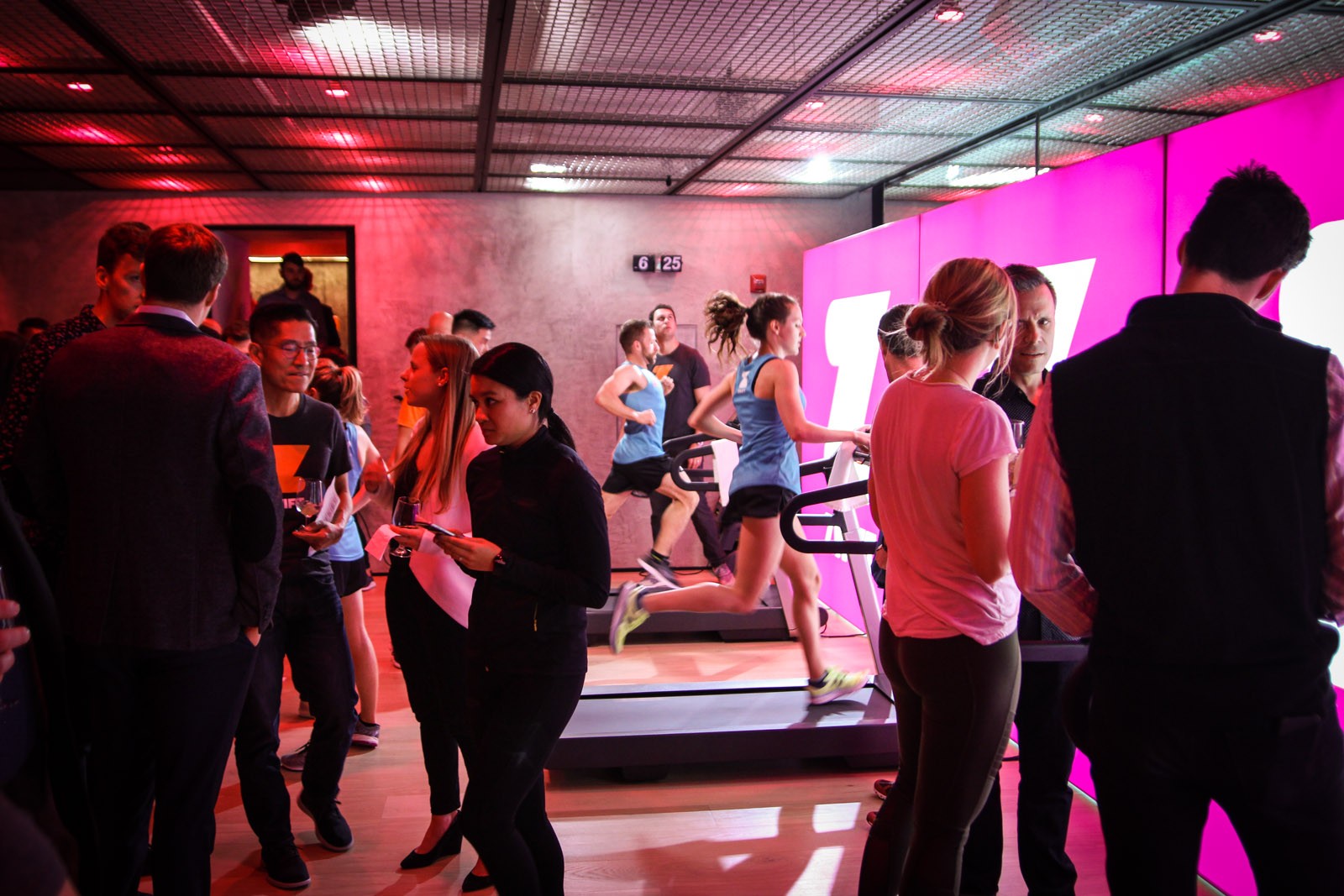 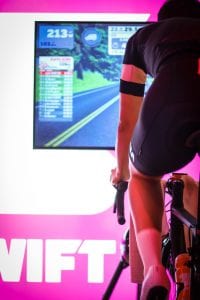 The event’s main room (shown above) showcased four Technogym treadmills open to anyone up for a jog. Zwift ran on iPads mounted to each treadmill, and throughout the night runners much faster than myself put in strong efforts while attendees mingled and observed.

Of course, a Zwift event wouldn’t be complete without a bike or two–and that’s exactly what we had. Two Rapha-bedazzled young guys spent the entire night riding Technogym smart trainers in one corner.

After grabbing a glass of wine with a bite of hors d’oeuvres I made my way around the main room, greeting various Zwift staffers. I met Jacob Fraser, a friendly and towering fellow who heads up North American events at Zwift (and thus was the man behind this event). Charlie Issendorf, VP of Events at Zwift, was also in attendance and I was finally able to meet him in person after lots of emails back and forth.

After an hour of mingling, the night’s MC introduced a handful of speakers, beginning with Eric Min. Eric talked about the huge opportunity Zwift has with runners. He explained that, according to Zwift’s research, the running community is eight times larger than cycling, with over 1 million treadmills in US homes and 2 million worldwide.

Our mission is to convince more people to be more active more often.

Celebrity guest Lionel Sanders was next, and he delivered perhaps the most engaging talk of the night, explaining how he has used Zwift to come back from four car accidents on the bike to finish in second place (and record time!) at Ironman Kona last year. Lionel is obviously a freakishly talented athlete, able to achieve incredible results despite (by his own admission) rarely training in the TT position and poorly hydrating for his race. I’m excited to see how this year’s Ironman Kona turns out for him.

Next we had a little bit of Q&A with Isabell from Technogym, who talked about how they had worked hard to make their treadmills compatible with Zwift run–an important step because it makes Zwift run even easier to use.

One of Stryd’s top guys spoke next. Stryd makes a high-end footpod which broadcasts super-accurate pace as well power (which is uncommon in the sport of running).

Earlier that day I had enjoyed a sushi lunch in midtown Manhattan with Zwift buddy Kenny Suh. Tagging along were Simon “Zwiftcast” Schofield and Shane “GPLama” Miller. We had discussed, among other things, how inaccurate some footpods are, and how Stryd needed to maintain their accuracy but lower their price from $199. As I talked with the Stryd guys they informed me that they had just released the $99 Stryd Live: a new footpod which maintains the legendary Stryd accuracy while leaving out the power component. That’s smart! 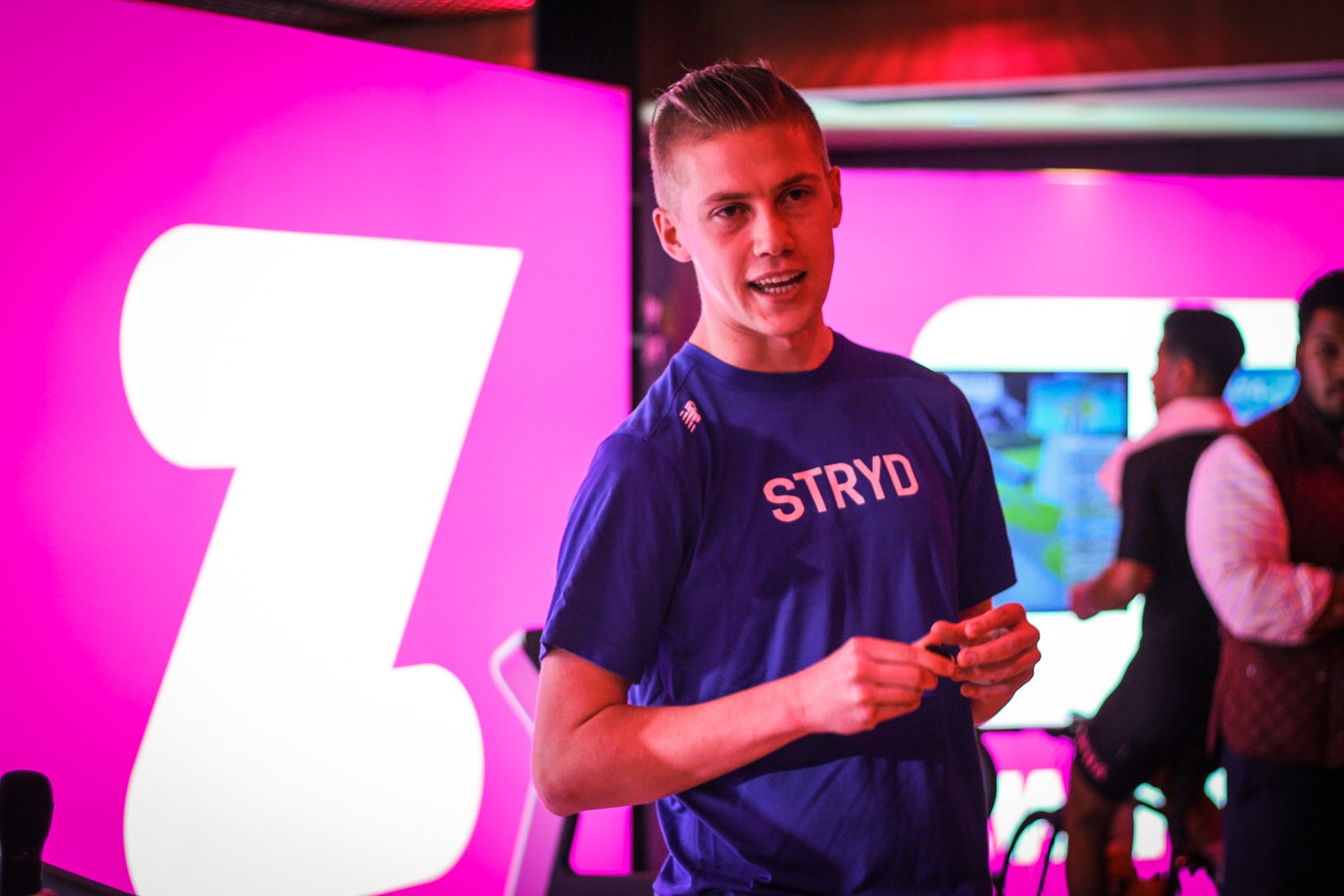 Stryd had a strong presence at this launch event, and I predict that they will be a key partner for Zwift as the running community develops.

Finally Game Master Jon Mayfield was called up to close things out. He wisely began by explaining what Zwift is… because nobody had really done that yet. People who haven’t used Zwift often don’t grasp how big of a deal it really is to be able to interact in real time with other runners and cyclists across the globe. This is a paradigm shift in the world of fitness, and Jon wants to make sure people understand that.

Jon went on to discuss future plans for Zwift Run, which include narrow trails just for runners. He recounted how getting devices connected was the hardest part of enabling running on Zwift, because when he started working on it there simply weren’t many smart devices out there to work with.

He also explained the genesis of Zwift Run, and the crowd laughed when he truthfully said:

It actually all stems from me getting a treadmill and my runs not showing up on Strava.

It took him just a week to get running going on Zwift, and once he did he started getting Strava kudos for his runs. Now that’s what I call initiative!

For the rest of the night I was able to hold many in-depth discussions with Zwift staffers including product manager Wes Salmon, an avid Zwifter who migrated from a long career at Microsoft in Seattle to Zwift in Long Beach. I wonder just how many of Zwift’s ~160 employees were Zwifters before they were Zwift? My guess is there are many in that boat.

One recurring theme I’ve heard in talks with Zwift is the challenge they face of hiring qualified game developers. These guys often want to pad their resumes with shorter term projects at big Silicon Valley names like EA Sports or Blizzard Entertainment, but as Zwift has grown in popularity Jon Mayfield told me it has become easier to bring on qualified developers. In fact, they’ve just hired their first game developer who is also an avid cyclist: that’s a good thing! Two new hires are coming on board to work with Jon, in fact, and that’s good news for Zwifters.

I enjoyed my time at Zwift Run’s launch event, not so much because of the content but because of the people. Zwift’s team is excited about the future, smart about the moves needed to get there, and appreciative of the community that has grown up around their product.

They may be a large and growing corporation, but their people have the attitude of a lean startup and are willing to do what it takes to make it happen. Ride on, I say. 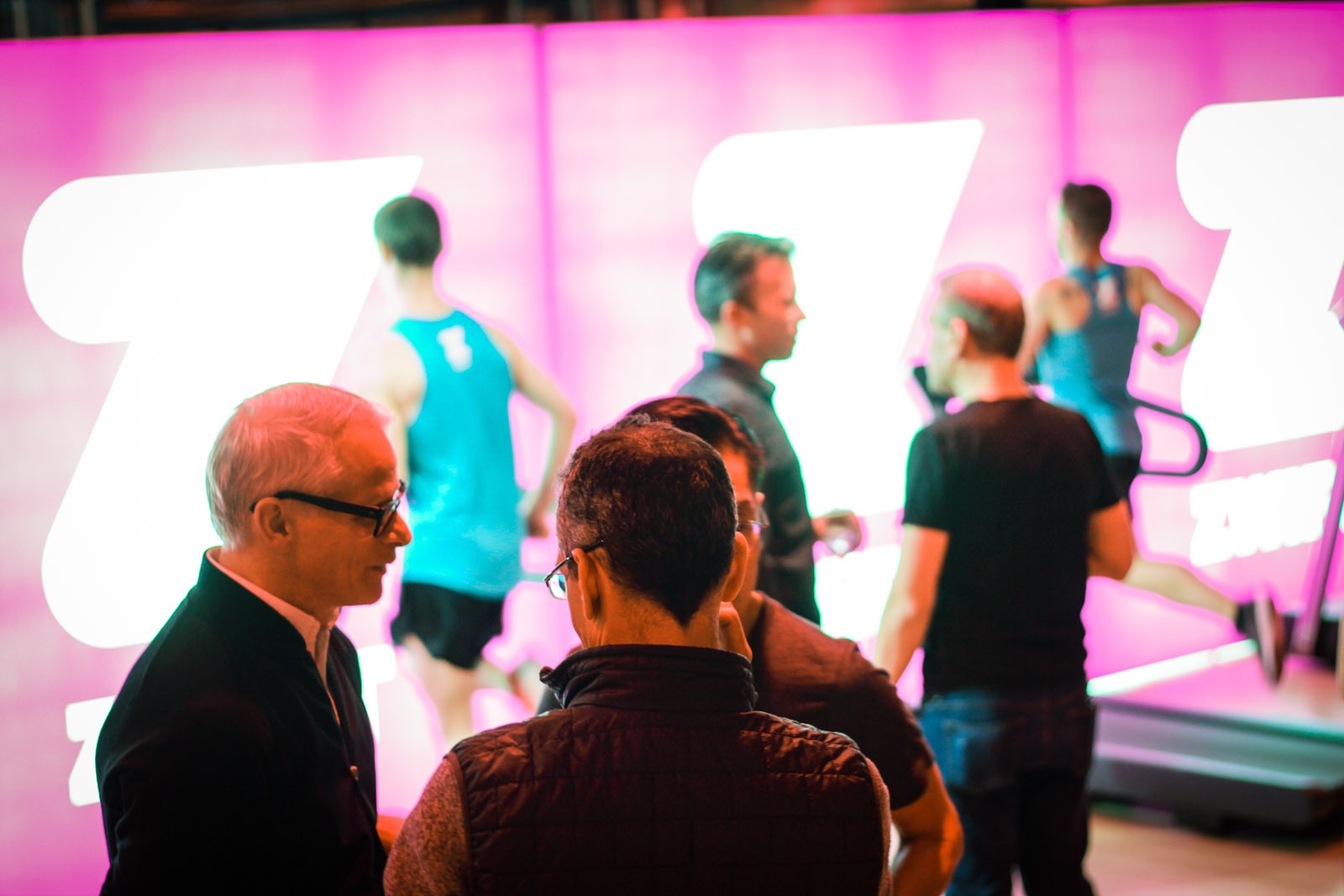 And here is Shane Miller’s recording of the night. The audio setup, with runners on treadmills in the background, made for a challenging listening experience. But you can at least get a feel for the event!

Eric Schlangehttp://www.zwiftinsider.com
Eric runs Zwift Insider in his spare time when he isn't on the bike or managing various business interests. He lives in Northern California with his beautiful wife, two kids and dog. Follow on Strava
Subscribe
Log in using
Log in using
0 Comments
Inline Feedbacks
View all comments