Elite team racing is being completely decoupled from Zwift Racing League and rebranded as “Zwift Grand Prix”. This should allow the elite events to feature a fresh set of race formats that are “uniquely esports”, creating a more varied and exciting experience for racers and audience members alike.

It’s a major shift from the past two years, when the elite-level “Premier League” teams would race a day before the community teams, riding the same Zwift Racing League route as the community riders.

Let’s dig into the details of Zwift’s plans for elite team racing in the 2022/23 season.

Zwift has already selected the 24 elite teams which will participate in the Zwift Grand Prix:

(Invited included those who took part in Premier Division racing for 2021/22, plus any new teams who had expressed interest in elite-level Zwift racing for 2022/23. Interested teams had to complete an application process and meet numerous requirements in order to be considered for the series.)

All races during the regular season will be scheduled on Fridays at 6pm/7pm UTC. Men and women will alternate weeks.

This schedule gives elite racers the opportunity to race in Zwift Racing League events on Tuesdays if they wish, meaning we might see some very high-level racing in the top divisions of ZRL.

Zwift’s Esports Team is working on a groundbreaking set of race formats aimed at providing great entertainment while making the racing more strategic and intriguing for riders.

Some weeks, for example, may feature multiple shorter back-to-back races, perhaps with riders being eliminated in each round.

The formats have not yet been finalized, and this is a noteworthy change from Zwift’s past approach to elite racing. Zwift says now that Grand Prix teams have been selected, “we will present the remaining event format options for further feedback and refinement with teams – this is a key facet in collaboratively building the sport.”

Kudos to Zwift for collaborating with top teams to help build something compelling and uniquely esports.

Each participating team will receive $1,000 as start money for the season.

Both the men’s and women’s competitions will have prize pots of $16,500 for the season.

Each Friday’s race will be broadcast live with commentary on Zwift’s Youtube channel.

Bit disappointing that teams who did well in the knock-out series aren’t included simply because they didn’t meet the sponsors or group ride criteria.

But importantly – when will zwift incorporate the live race points system they had for the Knock-out series into ZRL and then other community based points races???

I think we all know a few teams that could have done well, passed all requirements, and been happy to be given the opportunity to process said application… Sad but not surprised.

How do they control different trainer types? Or are the rules trainers must be controllable? Does zwift lock in 100% trainer difficulty? so the plainh field is level?

100% training difficulty is locked in. Trainers have to be within 1% accuracy, so a very limited set of trainers (think kickr v5, neo 2t) are accepted.

How are the Saris sponsored teams allowed to race then?

probably not riding on saris. 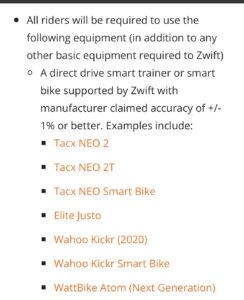 That’s funny… I know many elite teams that would have gone down the application process and been able to satisfy said requirements to compete. Sad how you have to have huge sponsors in order to be part of the discussion.

Most teams without big sponsors that made it in have riders with large social followings. I’m as gutted as you guys, but this is league is a business decision for Zwift and there are a lot of qualifications beyond just having the best racers.

I knew we should have recruited the Vegan Cyclist lol

I guess we will see how the list looks at the end… But the ones that are put in for reasons outside of Zwift performance tend to settle at the bottom. I guess I should add large social media outlets as well or just East Coast Bias…

All about the money though. Pay to Win bring a sponsor.

Which I’m not against but when the requirements listed community reach or whatever it was 80% of these teams would score a zero.

What’s sad is how few riders they let in. IRL races have field limits for safety. What excuse does Zwift have for this?

Is anyone actually interested in this? I think Zwift is quickly going to find that 75% of the premier league audience was ZRL racers watching to recce for their race the next day.

I am, for all the games I’ve played I was always watching how the pros do it, picking teams and players to root for and such.

There was a strong part of that for me. Another strong interest was being on a club that was able to have a squad in the women’s side of the PRL. Now that neither of those are true, I admit my interest will wane some. Also, putting it on a Friday hurts as well. Busy day for me at work, and the above make me less likely to move things around for it than I have on previous seasons. I get that doing it on Friday frees up

riders to do the ZRL, but I have to think that it’s going to hurt the audience turnout to have races on Friday (especially Friday evening for a large portion of the potential audience).

Yeah, that definitely seems like a poor decision in regards to the timing of the races. Seems to me like Saturday afternoon would’ve been the perfect time for it

Depends how hard you sucked the right people off to get into this.

OK, wasn’t just me out of the loop on team name changes then, when I couldn’t see them in the Women’s list I assumed they’d changed their team name – Seems kinda ridiculous to not have the most dominant Premier Division team in the event at all!

They folded this year

Glad to see that yet another big series caters to prime time Europe while further east might be sleeping and further west is at work.

I don’t understand all the negativity here. I could be wrong, but I would assume Zwift currently has finite resources (didn’t they lay off people who were previously managing the PL?) to spend on this new league experiment and the participating teams involved. Of course it makes sense they’d limit team entries to those backed by established sponsors who are capable of following their guidelines to a “T”.

What guidelines were there which other promoted Community or no-big-sponsor teams wouldn’t be able to follow? One of the biggest selling points of ZRL was that of promotion and relegation, and in particular that of promotion from the Community leagues to the Premier Division, that age old idea of “hope” or however you think of it where anyone who proves themselves can progress to the top, now that has been completely cut out from under the ZRL, so like as soon as they add prize money they cut out those without income/sponsors/etc, weird! Also a lot of the interest, not… Read more »

Any news on the video on YouTube about possible expansion to Makuri islands???

Viewers: 7-races, 7 weeks right?
Zwift: Nah, let’s have a 3-week break in the middle, then a 2-month break near the end, and have 7-races over a 6-month period!

Am I reading this right? No more Pros in a Premier League and no possibility of interaction between amateurs and pro riders?
If so, this is a backward move in terms of “Sport”.