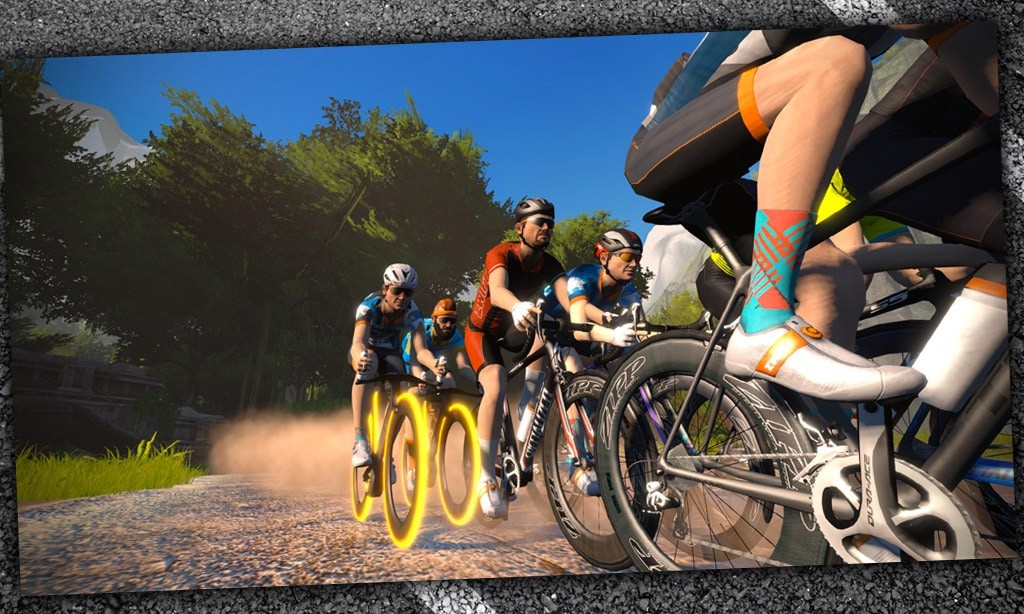 Unless you plan to always ride by yourself, drafting is an essential skill for the cyclist–both indoors and out. Here’s everything you need to know about drafting in Zwift.

The goal of drafting in Zwift is to conserve energy, just as it is outdoors. The amount of energy saved by drafting is no “marginal gain”–it is literally the difference between winning and losing in every bike race.

Estimates vary, but the number most often thrown around outdoors is a 30% power savings when drafting behind just one other rider.

Example: you could put out 210 watts while drafting and maintain the same speed as the rider ahead of you who is putting out 300 watts–assuming you’re both the same size, weight, CdA, etc.

Riding in a large pack will reduce wind resistance even more, resulting in greater power savings. Scientists studied the draft affect of a large peloton (121 riders) and found that wind resistance in the “sweet spot” of this large group was only 5-10% what a solo rider would experience. Incredible!

Based on our (admittedly limited) tests, drafting in Zwift behind a single rider gets you a power savings of approximately 25%. Using power emulators on a closed course, we had one rider sustain 300 watts while another ride drafted behind. We found a rider could stay in this 300-watt draft at 225 watts while on relatively flat ground.

Changes in pitch effect these numbers, as gravity comes increasingly into play. Using the above power numbers, the front rider will pull away on an incline. But when a decline hits, it will take even fewer watts to stay in the draft.

The draft effect in Zwift is enhanced in larger groups – see our tests of 4-rider drafting for more info.

The Challenges of Zwift Drafting

Zwift HQ has done a commendable job with their drafting algorithms to create something that works well in small and large packs for a variety of riders. That said, drafting in Zwift takes some getting used to, even if you are familiar with drafting in real life. Here are the differences:

Zwift uses the visual cue of sitting up (riding with your hands on the hoods instead of the drops) as an indicator that you are in the draft. It can be a little confusing though, since Zwift will also have your avatar sit up at slow solo speeds.

If you are moving at 33kph or more and your avatar is sitting up (on the hoods), you are in the draft.

The Tron bike has no “sitting up” animation, so even though you are experiencing the draft effect, your avatar will never change position on the Tron.

The draft boost powerup doubles the strength of whatever draft you are experiencing for 30 seconds. It only works if you are in the draft, so use it in the pack to save some energy.

Because of how Zwift’s “sticky draft” works, there is a “wattage window” within which you can hold a rider’s wheel. For example: you may be holding a wheel at 240w, but if you reduce your power to 220w you’ll still hold the wheel.

In a small group, it’s worth easing off the pedals to figure out just how much power you actually need to hold the wheel, so you aren’t putting out more wattage than necessary.

Zwift has an event mode called “double draft” which gives riders twice the standard Zwift draft effect. This is only used in particular events or races and has the effect of keeping the pack together while increasing overall pack speed. Read more about it >

Since Zwift steers for you automatically, you may at times find yourself being steered out of the draft. If this happens while you’re attempting to stay in the draft, simply keep your power at a level that keeps you in a good position to get the draft, and Zwift will typically steer you into the draft soon enough.

TT Bikes Do Not Draft

On Zwift, TT bike frames do not experience a draft effect. You can draft behind a TT rider, but the TT rider will not get any benefit from riding behind anyone else.

Just like outdoors, you can use the elbow flick motion (F1 on your keyboard, or in your list of motions on the Companion app) to signal to other riders that it’s their turn to take a pull.

Huh, being a mountain biker by experience, I was not aware of the elbow flick. Apologies now to those who were flicking in Zwift as I gleefully kept pace on their rear wheel.

It seems like having some sort of “wind” animation would be a helpful way to provide more obvious feedback. I’m thinking something like a Mario Kart animation with the wind wrapping around the avatar when in the draft.
For those with the Kickr Headwind or other Smart fan, do they experience any changes in fan speed when in the draft? Seems like that would be a good way to provide feedback, but probably mess with keeping the body cool – could be an interesting effect in the in-person eSports events that use standard setups.

I’d really like to feel resistance drop a bit when drafting–I think that would provide some intuitive feedback. (See my post on this topic: https://zwiftinsider.com/feeling-the-draft/)

Integrating it with the Headwind would be super cool, but so niche it’ll never happen! 😛

I think my brain already assumed that was the case because I always struggle to find the right cadence when I think I’m in the draft. Decreasing the resistance seems like an easy thing for them to implement – I’m surprised it’s not already the way it works.

Isn’t the elbow “flick” what Segan did in the Tour a couple of years ago, and got DQ’d? 😂

While in a workout, I don’t believe you feel the effects of the draft. But do riders who are not workout, get to draft off of you if you’re doing a workout?

Question: I have used zwift on my desk top computer for some time now. I decided to get apple TV so I could use zwift on my 50 inch screen. There is differences on certain screens, In settings the screen on my desktop I can adjust my trainer power, on the apple TV I cannot, On apple I loaded the Zwift app. Is there some difference?

No, the Trainer Difficulty setting is on AppleTV as well. If you aren’t seeing it that means you haven’t paired your smart trainer as a “Controllable Trainer” on the pairing screen.

I don’t think Zwift has got it right when it comes to drafting on downhills… and it is even worse on the interface between the top of a climb and the start of a downhill…. you can be 1sec behind a guy during the last 15secs as you reach the top of a climb, say doing 3.3 w/kg, then as you go over the top and partially recover at 2.3 w/kg and the guy is miles ahead in distance (as in real life) but the gap has jumped to 10secs and you are in a battle…. but you kept a… Read more »

Good observation, sir—but it’s actually Zwift’s time gap calculation that is to blame here, not their speeds on climbs or descents or when drafting!

I’ve found that your left-to-right position in the group is based on your power output. So on American courses (or Watopia) you will drift to the right and back if your relative power to the group is low. If you start putting out more power than those around you you will begin to drift left, and eventually clear of the riders so you can pass cleanly. This also works in individual draft situations. If you’re “stuck” behind an individual rider give a big push (at least 1w/kg more than the rider ahead of you) and you’ll break free to the… Read more »

I feel pretty sure i dont get a draft in races or group rides. My avatar even though on the hoods sits up high and easy to spot cos it looks like a giraffe in a pack of jaguars. I get no drop in power in the pack. I was in a group ride of over 200 today slap in the middle. Riders on hoods around me had a flat back but i was catching all the wind. In races my power graph looks like a TT as at no time during the race do I get a 25% drop… Read more »

Tim, I’ve had the same experience in Zwift. I am also tall. I get no draft effect/benefit, I’m riding higher w/kg than smaller riders next to me in the draft on flat courses (which all other things being equal violates basic physics), and I detect no “stickiness” or range of wattage for drafting when in a group. And I’m not riding a TT bike.

Hi,I am doing your workout Build me up ,and today I was supposed to do the one for today, but i got a message saying “Do it by sunday”..I do not Understand well the meaning,..the next one break free in two days….Can I exchange them?..Thanks

I am doing my first group ride in a couple of days. There are 5 groups (A-E) to choose from, with different w/kg averages to indicate power needed to ride in each group. My question is, these different power levels, are they applicable for the riders on the front or in the draft, so can I for example take it that if I stay mostly in the draft of a large group I can expect to have about 30% less w/kg on average for the ride, so if group C is for example 3w/kg then I would need to do… Read more »

How do I stay in a group draft when turning a corner in a Crit? I seem to go outside of group and then a few seconds later I am back in.

This is maybe a stupid/nooby question @eric, but how does Draft work up inclines/hills on Zwift? Is it still in effect but only if you are riding at about 33kph or faster, or is it amended to work at lower speeds in relation to the grade %? i.e. if you’re on a 10% incline you won’t be going 33kph (well I won’t!) so is there no draft or, is the 33kph requirement reduced in tandem to the increased incline? Does that make sense?!

There’s no kph requirement for drafting, but just like outdoors, drafting results in less of a power savings the slower you’re going. So uphill (at slower speeds), drafting doesn’t help as much as it does on flats or descents.