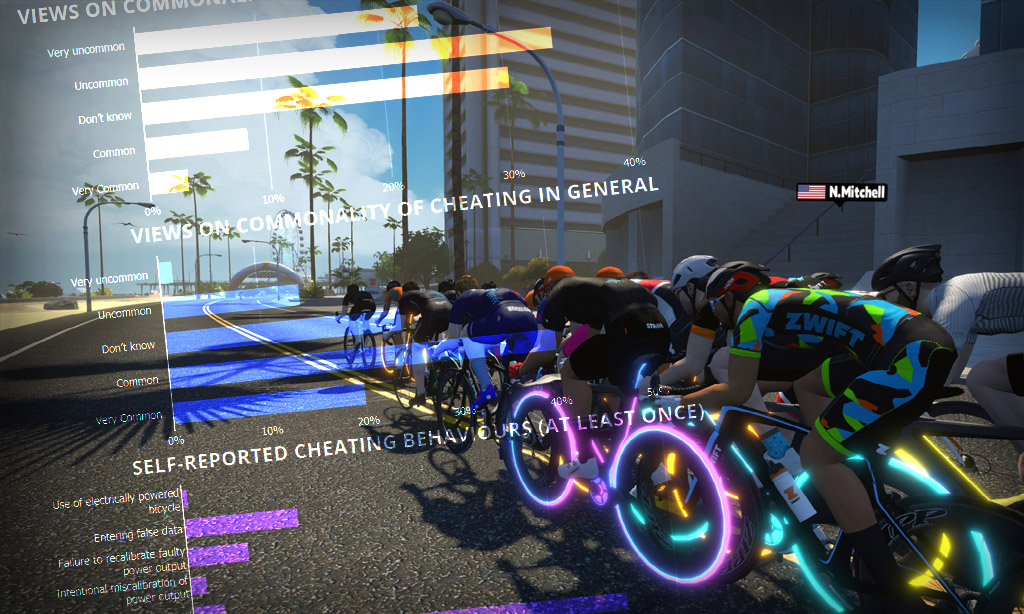 Anyone who spends any time racing Zwift Racing League (ZRL) or any of the other Zwift racing series and also has a Facebook account is pretty much guaranteed to have encountered “the cheating debate.” Accusations, screenshots, high dudgeon, the works.

(It’s something you don’t really encounter in bike racing “in the real world” as the options for cheating are so limited and difficult to detect. That said, in one of the more competitive Gran Fondos here in Mexico City I did once overtake the same guy three times, without him overtaking me. The third time round, I actually saw him joining the course from a side street. But I digress…)

I’ve been Zwifting on and off since 2015, mostly for training purposes rather than to compete, although I have done a fair bit of racing since ZRL started. In 2018 I started a psychology degree, which in my final year required me to do a project. I selected the option to do a survey because I’ve always been interested in the idea of cheating in sport and online cycling struck me as a great subject for a survey. It turned out there was no published research on it either.

The objective was to see if existing research on Achievement Goal Theory (AGT) would be replicated in online cycling. AGT contends that athletes compete to demonstrate competence, which is either measured by reference to personal improvement/mastery of skills/capabilities (task goal orientation) or by reference to externally focused benchmarks such as beating other competitors (ego goal orientation). Research also suggests a link between achievement goals and moral attitudes, including attitudes to cheating, with a positive association between ego-oriented athletes and cheating.

My results were consistent with this theory. In terms of attitudes to cheating and sport in general, respondents were less motivated by ego goals (e.g. a desire to win or beat others) than in other published surveys of this type and more motivated by task goals (a desire to objectively improve their own performance). There was a lower acceptance of cheating than in similar surveys of athletes in traditional sports, although those tend to involve high-performing athletes rather than a cross-section of amateurs.

But the bit that I think really interests the Zwift community is how much and what type of cheating goes on. In the survey I identified 7 different behaviours that might be considered “cheating”, with some more egregious than others. I got nearly 600 responses in 10 days as a result of posting a link on various Facebook pages, with the results set out in the table below.

About 46% of participants admitted to “cheating” at least once, although only 7% admitted to cheating often.

Self-reported cheating behaviours (at least once)

Views on commonality of cheating among friends/teammates vs in general

The statistically significant predictors of cheating behaviour on Zwift were:

One of the more interesting results was the apparent conflict between participants’ general anti-cheating views and the relatively high occurrence of occasional “cheating behaviours”. Participants were generally task-orientated, yet nearly half admitted to doing something that could be considered cheating at least once.

Mazar et al. (2008) have shown it is common in the face of potential rewards for dishonesty for people to cheat just enough to gain an advantage, but not enough to undermine their conception of their own honesty. In other words, individuals have a self-prescribed amount of dishonesty that they can permit without undermining their own self-concept of themselves as fundamentally honest.

In the case of online cycling, this might be occasionally failing to update one’s weight ahead of a race even if you know it has increased, but not so often as to undermine your sense of your own honesty.

Of course, like any methodology, surveys have their drawbacks. In this case, the sample was self-selecting – I sought volunteers. So maybe those who are anti-cheating were more likely to participate? Also, social desirability bias means that even when a survey is anonymous people can be reluctant to admit to behaviours like cheating which are seen as socially undesirable. So there are caveats to the results.

Overall the data is interesting (if only for the 3 people who admitted to using an e-bike!) and it has certainly generated some online debate. If I were to follow this up with more research, I’d want to do something qualitative with in-depth interviews to try and get under the skin of some of the apparent conflicts in the data between anti-cheating attitudes and what appear to be occasional cheating behaviours.

My own view is that it’s best to use Zwift as a wonderful training platform and enjoy the racing for what it is and the performance improvements it brings. Hopefully the various controls that WTRL, Zwift, and others are implementing at the very top end will prevent any cheating that does go on from having an impact when the results really matter. Ride on!

What (if anything) surprises you about these survey results? Comment below! 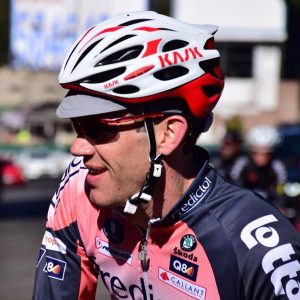 James is a keen but very average middle-aged B-category Zwifter who definitely prefers to race cyclocross to road in the real world. Currently living in Mexico City where that’s not an option, he is shortly to return to the UK where he’s excited to start getting muddy again (COVID permitting).

Kudos for addressing the elephant in the room.

Great study thanks for sharing. Surprised no age difference, every young gamer I know considers finding cheats almost part of gaming, victimless crime so to speak.

I think there’s a difference between the gamers who consider finding a glitch to exploit just a form of expertise on that particular game vs something like Zwift where weight doping or using an e-bike is a blatant form of manipulating your data to try and make yourself something you’re not.
To me, that’s the difference between having an advantage in an IRL race because you know the course very well and know exactly where to attack, and taking PEDs to gain a physical advantage over the other racers.

Zwift and cheating, never!🙄 80’s DDR and 2010’s Russian athletes even were shocked!😂

Not every bot is a cheater, sometimes those of us testing software for zwift need some real data and peddling isn’t always a viable option.

Remon Lam (@remon-lam)
Reply to  Someone

True, but in that case do it offline, so they don’t bother anyone.

I’m curious what weight error counts as cheating. I’m also curious what people are ’rounding down’ to. There’s “racing on Monday with your Friday weight” but…

Now if only Zwift would fix Withings integration…

think I read somewhere once +/- 5% was considered “acceptable” but that seems quite high to me 😀 think maybe 3% would be better (~2kg either side).

My 5c – if they are asking they are cheating. Its a Scale it give you the number – type it in or use the FITBIT integration and sync it.

Thanks James. My ultimate bear bug is the racer who is blatantly sandbagging and in a solo break away (like a B cat doing 4-5 or even 6 w/kg constantly) and everyone, including myself, is using the race chat to ask him to ‘race fair’ and he most likely has chat off. This cheater usually drives a hard pace that means no one can attack and everyone thrashes themselves trying to get somewhere in the race. So he is cramping on everyone’s fun and most likely oblivious to everyone’s feedback about it. A handy update for Zwift down the line… Read more »

I still think (as has been said many times by others) Zwift really needs to change the category strategy so that you move through the rankings with points as you would IRL. A sandbagger who keeps winning would only do it for a short while before being promoted to the next rank and eventually get to their true position. It’s currently far too easy to simply drop into a lower category and then ruin it for others.

I agree 100%. It would be quite easy to automate categories based on previous races and even workouts from FTP.

“Use of ebike” XDDD

Sandbagging is should only be an issue in races, not event rides. If there is a categorized group ride with an announced pace of 3-4 w/kg and the group I’m riding with takes off at 4.5, I don’t feel like its out of line to ride at that power if everyone else is doing the same. This is especially true if you’re talking about a group ride on a particular course where you’ve selected it because you want the social aspect and the company. Unless it’s a race with ranked results, I feel a little “sandbagging” leeway is in order.

Agree. I join whatever group ride is available just to have some riding partners. And then just follow the leaders guidance on allowing breakaways or no. My favorite are the group leaders that allow KOM breaks and then ask us to slow pedal until the pack joins.

Interesting article. I saw the results of the survey when it was posted to facebook and think the caveat is a huge factor. Generally the riders in teams on zwift do behave themselves apart from as shown the hidden cheating (weight changes etc) Which is very hard to prevent although in itself does not have a direct negative impact on races as long as the rider is consistent and not changing weight etc race to race. What causes most frustration and probably largely not captured by the survey is the sandbagging by casual riders that are not on ZP or… Read more »

I do a lot of racing, and I do a lot of pissing and moaning, especially after losing. But the reality of esports is that there is and likely always will be inconsistencies in power numbers. While I never fully trust a zpower rider, I think the majority of absurd power is due to calibration and the trainers themselves. While direct-drive trainers tend to be more consistent/reliable, there is way too much room for error with the wheel-on ones; if they’re not calibrated every time you get on the bike, something as simple as a change in tire pressure can… Read more »

I did a quick review of my last race to see if the number above felt right…. i looked at my last “Race” in Zwift power and looking at the winner he had lost 20cm in height and 65 pound in weight in the 3 months – how is that possible this is not flagged. The true problem here is there are Zero tools to identify cheaters, or trends over time. I’m not saying somebody loose 60 pound or shrink 20 cm but without the risk of getting flagged nobody cares. As a result folks are forced into the situation… Read more »

Psychological scientist here, well done. I think if you repeated the survey a second time and got a larger sample, because they usually want that, you could get this published. Journalist editors are guilty of liking to publish “hot stuff” and I would say this is hot stuff. I would worry more about election bias only attracting people who are concerned about cheating, and not enough people who don’t care or are ignorant, than the other self selection concerns you stated. But again, this is great work and should help you get into graduate school if that is your desire.

In the old days of pre-richmond zwift your trainer data would often freeze up. So I’d be doing a hard climb at 4 or 5 wkg and then my power would just lock up. And in the process of trying to fix the problem you’re setting PR after PR flying across watopia.