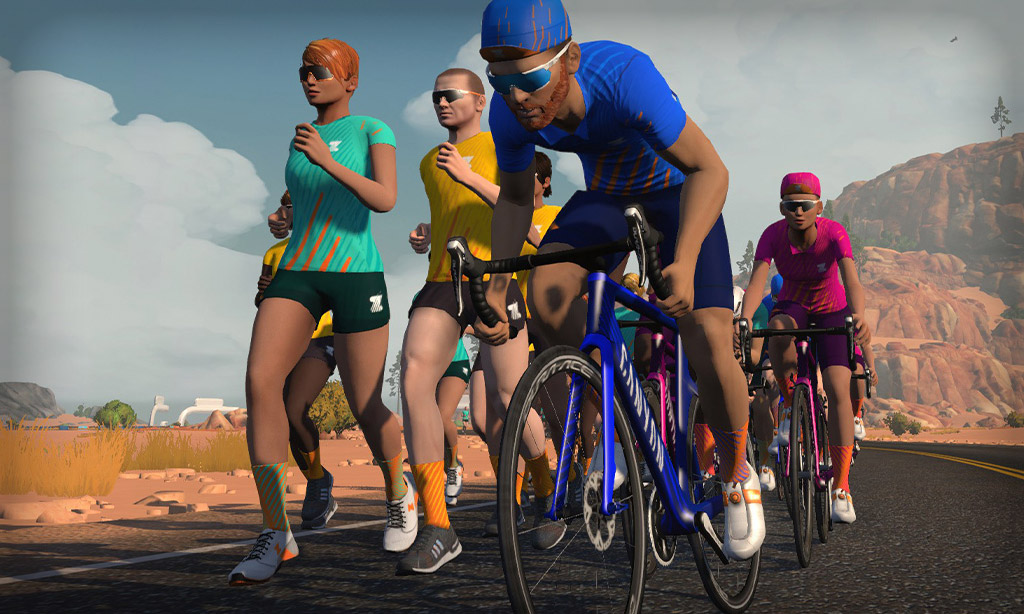 Zwift has just released the details of this year’s much-anticipated Zwift Academy (ZA) program. There will be three academies in the final months of 2020: road cycling, triathlon, and running. Each academy is 8 weeks long, and there will be some overlap since the academies start 2 weeks apart (dates below). Open enrollment begins on September 8th.

While each academy still includes a contest with finalists winning big prizes like pro contracts or big race tickets, the focus has shifted to the common athlete. Unlock You is the timely phrase Zwift is using to encourage athletes of all abilities to sign up for ZA and push themselves to new levels of fitness.

With three completely separate academies there are a lot of details wrapped up in this announcement. We’ll outline the key info here, with followup posts to come!

Wildly popular ever since its initial launch, ZA Road is now in its fifth year. It features separate training programs and events for men and women.

An intriguing new event format is being unveiled for this year’s Zwift Academy. Dubbed “Segment Rides”, these events allow Zwifters to test themselves on two different segments per ride, much like you might do outdoors on particular sections of road which are well-suited to particular efforts.

The workouts haven’t yet been released, but they were designed exclusively for Zwift Academy by the two new coaches from Dig Deep Coaching (see below). The workouts are designed to improving your overall cycling abilities, no matter your current fitness level.

Workouts can be ridden in group workout events, but they will also be available in the workouts menu for solo efforts. (And if you really want to get at it with friends, organize a group workout via Meetups!)

Like past academies, there will be a series of progressive unlocks as riders make their way through the program:

As in past years, ZA Road Women will be vying for a 1-year pro contract with the CANYON//SRAM team!

For the men, there’s a change this year – ZA Road Men will be battling for a spot on the Alpecin-Fenix team, instead of Team Dimension Data (now NTT) as in past years. Another change: this is open to anyone 18 or older, not just a U23 rider.

In another change from past years, there will be no semifinalist round for ZA Road 2020. Instead, 5 finalists from the Men’s academy and 5 from the Women’s academy will be selected. Finals will take place approximately in December, pending lockdown concerns.

This year’s ZA Road coaches are new to the ZA coaching role, but they’re not new to cycling, Zwift, or coaching in any way! Stephen and Dan are experienced and strong bike racers, both indoors and out.

Stephen is a lifelong racer who’s represented Ireland at Worlds and European Championships. His goal is to give every rider a 360° view of their physiology and strengths. He designed ZA’s structured workouts as a journey – one that educates and asks you to exert hard efforts on the bike. See his ZwiftPower profile, or read his bio on DigDeepCoaching.com.

Dan was born on a mountain bike, and his medal-winning history as a Brit racer speaks for itself. He used a rich knowledge of training, recovery, and structure to create a program that’s as tough as it is intelligent. Follow it and discover the building blocks to unlock your inner power. He races on Zwift with Saris + The Pros Closet – see his ZwiftPower profile, or read his bio on DigDeepCoaching.com.

For the first time ever, Zwift is rolling out an academy just for runners!

To graduate from the inaugural ZA Run, Zwifters will have to complete 8 designed workouts designed with a focus on improving both short and long-distance running times. Graduates must also complete 2 events (races or group runs) at 5k or 10k distances.

Workouts can be done in group events, but they will also be available in the workouts menu for solo efforts. (You may also organize a group workout via Meetup.)

Runners will progressively unlock in-game kit while making their way through the program:

Grand prize is a spot on a supported Zwift ZA Run team that will compete at the prestigious 2021 Berlin Marathon. A total of 6 finalists will be chosen for the grand prize.

With 20 years of experience as a pro athlete, 3x Olympian Jen Rhines coaches runners of all ages and ability levels, from amateurs with no experience to Olympic hopefuls. She also designs the training plans for the AKTIV Against Cancer charity runners who compete in the Boston and NYC Marathons. Learn more at JenRhines.com >

The first iteration of Zwift Academy Tri 2020 was in its final stages when COVID hit and shut down the world of competitive athletics. Because of that, this is actually the second ZA Tri 2020! Once again, the goal is to earn a spot on the “best supported amateur team in tri” – the Zwift Academy Tri team – and to qualify for Ironman Kona.

Workouts can be completed in group workout events, but they will also be available in the workouts menu for solo efforts. (You may also organize a group workout via Meetups.)

Like past academies, there will be a series of progressive unlocks as athletes make their way through the program:

Grand prize is a spot on the well-supported Zwift ZA Tri team with a goal to qualify for Kona. A total of 6 finalists will be chosen for the grand prize.

The ZA Tri coach and mentor team is returning from previous seasons:

Dr. Dan Plews is a world-class coach and athlete. A trained academic, Plews has a PhD in exercise physiology. He’s worked with 25 World Champs and Olympians, in sports like triathlon, rowing, and sailing. But long course triathlon is his passion, having coached athletes to sub 8 hour performances over the long course distance and numerous 70.3 and Long Course wins. On top of all that, Plews holds the record— 8 hours and 24 minutes— for the fastest ever age-grouper in Kona. Learn more at EndureIQ.com >

Sarah True is an American athlete who competes in triathlon. She represented the United States in triathlon in 2012, finishing in fourth place, and at the 2016 Summer Olympics. True is the winner of the 2007 ITU Aquathlon World Championships and finished in second place in the 2014 ITU World Triathlon Series.

A three-time Olympian. World Champion in triathlon and duathlon. Countless ITU World Cup and Ironman podium appearances. Great Britain’s Tim Don was a legend even before the 2017 Ironman South American Championship in Florianopolis, Brazil. That race cemented Tim’s place as a true triathlon great as the new IronmanWorld Record.

Visit zwift.com/academy for enrollment and details >

Post below, and we’ll do our best to get answers!

Great article, thx Eric. I got a question re the finalists:

Does this mean the finalists will be chosen randomly or are those the top 5 of the Men’s and Women’s?

Top 5 men and women. In past years the coaches (and maybe some additional panelists) have chosen the finalists.

run outside with your phone?

The Kid
Reply to  Chris Ovenden

All you need is a Zwift RunPod rrp £35 or similar and an iPhone with iOS 9 or above to run the Zwift app. I use an old iphone 5s without a SIM in a Wahoo PROTKT Sportscase you can pick one up on ebay for about £15 just make sure the Wi-Fi works and save the run at home!

Brendan B.
Reply to  The Kid

Brendan B.
Reply to  Chris Ovenden

How would I get it to transfer to Zwift?

You set the run pod up as a sensor in zwift, like you do with your trainer, so you’d be running zwift as you ran around outside. Obviously would need to be in a place where you have data connectivity too.

Raced on the La Reine map only once so far but based on that experience, the race is basically who can hold the highest w/kg over 35-40 minutes. Similar to races that end at the top of Alpe du Zwift.

Richmond is a little more tricky and also depends on how many laps you have to do. But as soon as you start climbing up Libby Hill on the final lap, riders with the highest 5min w/kg are able to create enough separation from pure sprinters.

Can any rider of any ability join in as a training exercise?

Yes, the academies are very inclusive. It’s all about improving yourself, whatever level you’re at!

It’s a program to recruit members to a Tri team. Not a complete Tri training program!

Great to see a decent looking helmet on offer. I’ve been waiting ages for one of them!

I notice the article has changed from saying that the final Road Academy unlock is a new colour scheme for the Canyon Aeroad to ‘A special bike unlock from Canyon!’ Any news on this? New Canyon Aeroad incoming to Zwift?

It’s supposed to stay a bit of a secret for now, due to agreements with Canyon. But let’s just say you’d make a good detective, Chris… ﻿😉﻿

Not clear whether I’ve registered already.

I would love to register. However, I have an 8 hour job from Mondays – Fridays so very limited time to allot for weekdays. I am afraid i might be able to complete what must be accomplished due to limited time i have.

If you registered for all three, do the cycling and running workouts then count in the Triple programme too?

This will be my first Zwift Academy. I have registered in the ZA Road. Will they be releasing a calendar with their events?