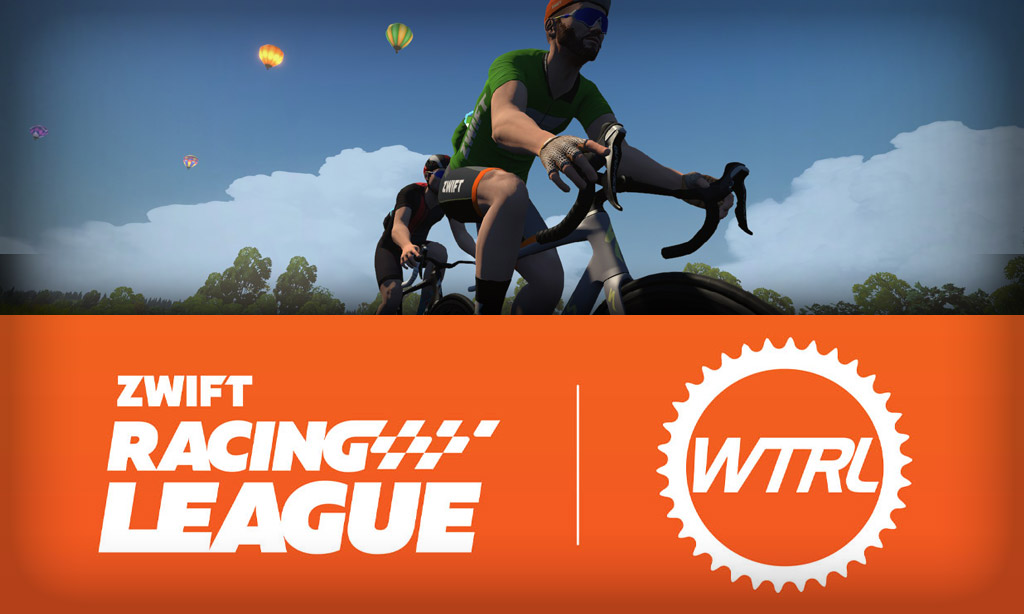 My race week centers on the two WTRL events – Tuesday is Zwift Racing League (ZRL)… Thursday is for the TTT. Martin and Steven of WTRL have cracked the code of making Zwift racing practical and I’m all in!

Each week I publish a recce filled with a course profile, bike recommendations, and even some target times. If you like your recces delivered visually find me on YouTube here.

I rode ZRL Season 1 and 2 with a small contingent of rebels from Rowe & King, first in the Ewoks, then the Droids. But for season 3 the club is going to town with ZRL – ten teams to start and new rider requests coming in daily. I will be with the 11-rider squad of the R&K Hyenas. I hope to see all 10,000+ of you out there on Tuesday!

Season 3s opener is a Team Time Trial. If you’re a returning ZRL racer you know the drill (skip this section!) but if you are new to ZRL and haven’t ridden in the Thursday league, you’ve probably gathered the Team Time Trial format is different from your everyday rides and races. Let’s explore that a bit…

In the ZRL TTT your team of 4-6 riders sets off at a pre-ordained time (more on this later) and works together to get around the course in the fastest time possible. Sounds simple… and it is. But the trick is in how you get the best performance out of the team.

What makes a TTT different?

What makes a TTT different? Basically it’s about the teamwork. In a normal race on Zwift, you are pretty much on your own. You might get comfort in seeing team jerseys, but frankly that’s about it. In the TTT you are working together the whole time: using the stronger members to help the weaker members, using climbers to pull the team over the hills… you get the idea. The mission is to either be in front of the team pulling, or be safely in the draft resting.

One fast lap… that’s all this is. But this route is a little more technical that it looks at first.

Take a look at the ZwiftHub profile below. The route starts with three rollers which change into a series of small bumps and then is pretty much flat from 7km to 10km before you start the climb up the aqueduct. The aqueduct climb starts well before the actual KOM marker. After descending (around 11km) the route is mostly flat (there are a few little rollers) all the way to the finish at 24.1km.

Bike recommendation on this route is pretty straightforward: aero rules the day. I will be riding my S-Works Venge with the pretty Super9 disc wheels. You should pick your most aero bike and wheels.

See Fastest Bike Frames and Wheels at Each Zwift Level if you need help knowing which setup you should use.

This is a popular group ride route so if you like company. check the event listing on zwifthacks.com. Additionally, France is one of the guest worlds Saturday through Monday, so you can easily free-ride the route.

That said, I rode this route yesterday so you don’t have to… France is one of the most beautiful Zwift worlds but on Tuesday you will be going too fast and hard to notice. Here is my recon ride in glorious HD!

And here’s a recon from Rick at No Breakaways:

This is a beautiful ride, almost perfect for a Team Time Trial. I break this route into four sections:

Don’t underestimate these three small hills. They start at 1km and the road is windy, so it can be challenging to get your group working well together. Keep an eye on your teammates and keep communicating. Don’t over-exert here, your first priority is to stay together.

Each of these bumps is tiny – maybe 1 or 2 meters max… but the repeating change from ascent to descent will throw everyone off. The effect is similar to the dreaded Esses in Watopia. What is helpful here is a strong voice – a DS if you have one, but in reality (sorry DSs) anyone will do. Just call out the top and bottom of each bump reminding the team to manage their momentum.

At 8km, shortly after the Ballon Sprint, the terrain settles down and it’s flat until you begin the climb to the aqueduct.

Part 3 – Up and down the aqueduct

From 24km to the start/finish gate is 1.2km of downhill and flat. Finish with a group sprint to show the crowd what you’re made of.

Part 4 – Mostly flat to the finish

Once you descend the aqueduct (approximately 12.4km) it is mostly flat all the way to the finish.

That’s 12km for you to get into formation and ride like the wind. There are a couple of minor bumps along the way but nothing to slow you down.

If you’re new to the TTT format this route is a wonderful starting point. A little technical undulation at the start to see how well you operate as a team, but a long flat section at the end to practice formations.

If you are experienced at TTTs this is a flat out ride. Start with 6, end with 4, claim your points!

One important considerations for ZRL teams is the change in the draft algorithm from season 1 to season 2. The sticky draft is gone, reducing the draft / pack dynamics for groups this size. This can cause groups to split apart. Probably most important through the “intestines” section and up and over the kom. Teams can’t afford to blow apart that early in the race.

Sticky draft is gone? Not from my experience, seems stronger now, but you are right, it is changed and something new to figure out

I totally agree the “intestines” – I love that name – are key. Only the best of teams can hold together a paceline through there… for everyone else an extended blob makes sense.

That said – I think Ben is right, Sticky draft hasnt gone anywhere. According to the Zwiftcast interview Sticky is there for a reason and wont depart.

Sticky draft is still there – but it won’t keep you locked directly behind someone anymore. Teams that were using that to stay in line will need to back off slightly and pay attention to position more. The changed draft ‘AI’ definitely changes things a bit – but more in the scratch racing than the TTT for me.

Totally agree. POD and I did a post race test of stickyness yesterday and its definitely still solid… but also as you say, definitely different.

You mention pedaling with 5 seconds before the team start time. Won’t that cause you to go over the start line early?

The challenge is how you wake up the trainers without crossing the line early… get it right and you cross the line as your wait time elapses… get it wrong and you get a time delay… high risk for a marginal gain 🙂 There are definitely more rewarding things you can improve in a TTT – like operating in a stretched blob or a proper paceline… good, crisp communications… but being able to get out of the pen without a team mate left behind because their trainer took too long to wake is a factor as well.

Really sucks to be constantly hassled by this site to receive alerts for new posts. Please just stop with this – as a rule, if you have to use a pop up for something, then don’t do it.

Thanks AC – ill pass the feedback on to Eric.

Wondering if we ever get an explanation for the tech problems, what was the cause and what is being done to make sure it doesn’t happen again.

For instance, if you look at the women’s PD results on Zwiftpower, barely half the teams have even the required 3 riders listed in the results.