Have You Seen the Yeti on Alpe du Zwift? 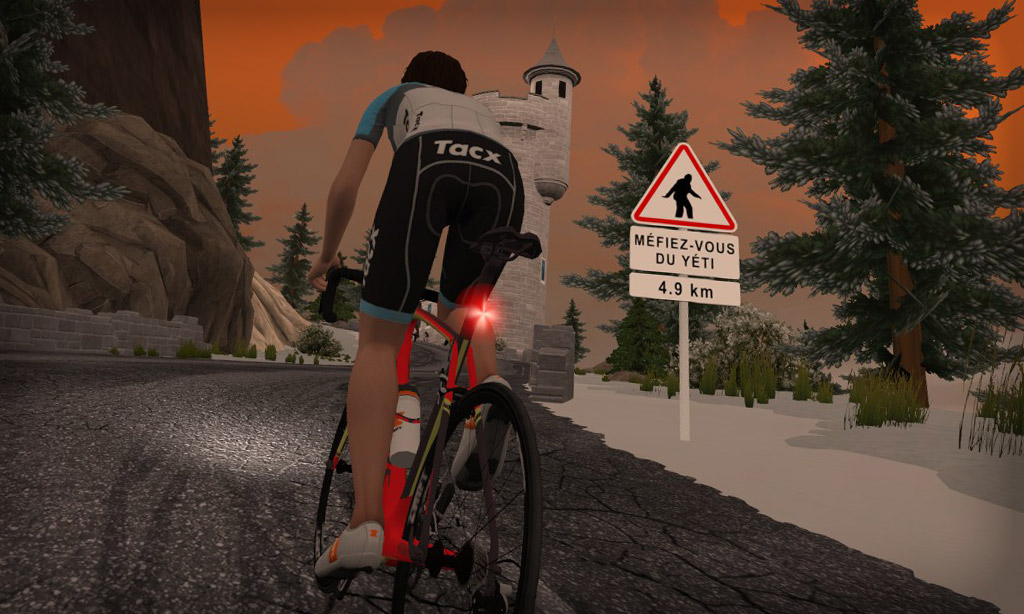 Zwift’s worlds are full of colorful flora and fauna. Watopia’s creatures, in particular, bring an especially fun aspect to the game. It all started with Scotty the Squirrel, but now we have Jarvis the Bear and numerous unnamed animals like the ocean tube whale, the desert roadrunner, the ibex atop the Epic KOM, and of course the dinosaurs in Titans Grove.

But have you seen the Yeti on Alpe du Zwift?

The Yeti is the most elusive of Watopia’s creatures, and in fact his (her?) existence wasn’t confirmed until months after the Alpe arrived in-game. Zwift’s creative team placed a playful hint after turn 12 which says “Méfiez vous du yeti” (beware of the yeti) in 4.9km:

Then just up the road, Zwift artists had a little fun, turning tree branches on turn 9 into an object that looked rather yeti-like:

But this isn’t the Yeti. And it’s nowhere near 4.9km from the warning sign. No, to see the elusive beast you’ll need to keep climbing!

The Yeti also makes an appearance on the Crit City mural:

The Yeti is most commonly seen off to the left after you pass the orange tents of turn 7, sitting on the rocks to the left of turn 5, or on the right side of turn 4. These areas, incidentally, are approximately 4.9km from the warning sign at turn 12.

Here are a few Yeti pics from Zwifters:

Caught on Camera: a Yeti In the Wild

I’ve never seen the Yeti while riding the Alpe, despite keeping my eyes open on 25+ trips to the top. I’ve even held multiple Yeti hunting expeditions, parking my bike near turn 5 and recording video for hours so I could later scrub through quickly to see if I could spot the Yeti.

But no joy. No Yeti.

Then just a couple weeks ago, I parked at turn 4 and powered up the trail camera. Here’s what happened a few hours later:

As far as I know, this is the first instance of the Yeti being caught live on camera. I’m still waiting for the call from National Geographic.

Have you seen the Yeti? Where did you spot him? Share below!

Thanks, Eric this was interesting

Hey Eric. The video is private. I haven’t seen the Yeti

The Video is set to private and would not play…

I’m more amazed by the power numbers of the rider in the first picture of the article — 1508w and 1373w on segments of the Alp climb? What the hell is up with that?

Just our test bot, in a hurry to get up the Alpe. We run it behind a firewall so it doesn’t interfere with actual riders.

I saw it once while climbing and snagged a screenshot- I was pretty excited and didn’t know it really existed until the Crit City mural.

I always thought this was an inside joke to ask newbies if they saw the yeti, when there was no such thing. I thought this article would be a continuation on the joke with no pictures or video evidence. My mind is blown.

Ive been up the Alpe on my bike 63 times and twice on foot. I’ve only seen the Yeti once in all that time, to the left as I was approaching the orange tents. After realizing what I’d seen it was too late to capture a picture. What I saw looked a lot like what’s in the video.

Saw him hiding behind the rocks at turn five on my 24th trip up. He was still in the same spot when I came back down. Extra credit – are the marmots always there on turn 5? I don’t recall ever seeing them until I looked at my Yeti screen grabs. 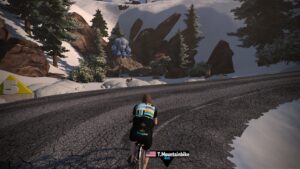 To: Curtis Repen,
Thank you for posting this picture,
this is one of the very best photographs of the Yeti that I have ever seen.

This is so cool 👍😀 I ride the Alp almost every day and haven’t seen ( noticed ) the Yeti yet and didn’t really believe in it was there. But now I guess it’s just a matter of keeping my eyes open ( which can be a challenge at high watts 😉 ) and cross my fingers 🤞 I’ll guess we will se some parked bikes at corner 4 in the future 😉

Great, never really paid attention but now I will ﻿😊﻿!

I once saw a dolphin wearing sun glasses swimming around one one of the ocean tunnels in WTopia. Have never seen. It since – has anyone else ever seen it?

Wow. I always thought it was just that tree near turn 9. Been up +-30x and never noticed any of this. I think I preferred my ignorance as I’m going to have to keep climbing till I see it. This would be the cruelest of all April fools jokes…just saying.

Man I love this creature in our world. I hope to catch a picture of him on one of my group rides.

Interesting. Have not been up
the Alpe since getting Tron a while
back. Almost done with the badges.

I saw him once bounding across (maybe along) the road in the distance. That was on about my 4th or 5th time. Been up the Alpe about 15 times now and haven’t seen him since.

From the comments and article, it seems the Yeti is not always in the same place in the map and moves around on the Alpe. Is that correct?

Hi,
Saw the Yeti this morning during TDZ3, at turn 4. First time after 22 climbs. Just time to take 5 pictures during the race. 1 joined here for you 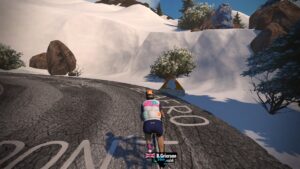 I saw him today. Bad picture. He is on the rock in the upper right. He was at turn 5. 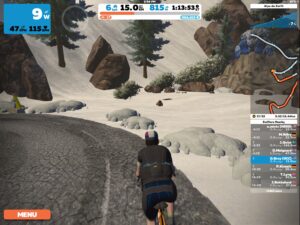 25+ times up Alpe before I saw the Yeti. Best thing that has happened to me during Covid. 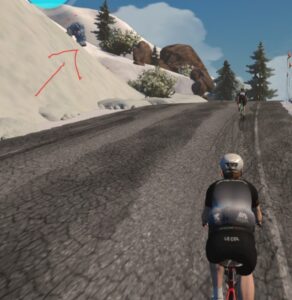