Thoughts on the Zwiftcast YC Interview 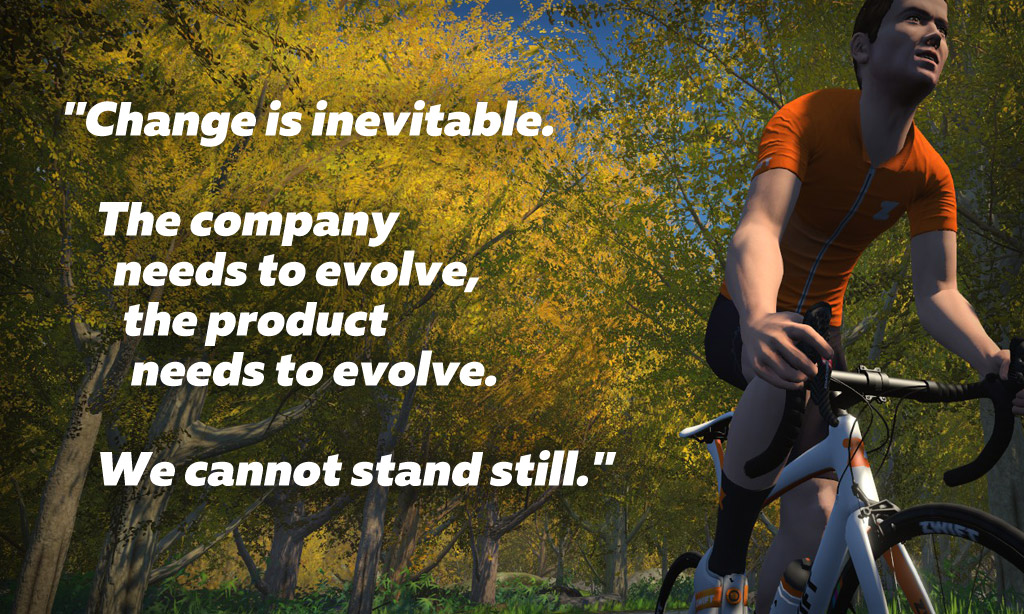 The latest Zwiftcast episode is a special edition featuring an interview with Zwift’s first Chief Product Officer YuChaing Cheng (known to all as YC). YC’s job description puts him in charge of what seems like almost everything at Zwift. So his perspective on where Zwift is at and where it’s going should be interesting to all fans of the platform.

After listening to the full interview, I thought an article summarizing some of the most interesting bits may prove useful. You’ll be the judge of that, of course! Let’s dive in…

Does Zwift Need to Change the Way It Works?

He then lists the overarching changes that he is working to implement:

He acknowledges that ZHQ staff are generally passionate Zwifters who want a better product, but they just haven’t been as effective as they could be. I can echo this truth. Zwift staffers (and I’ve spoken with many over the years, from top executives to those in the trenches) generally love cycling and love the product. But despite this, for the past few years it has often felt as like unknown organizational/process/staffing hangups have resulted in a lack of quality execution, resulting in less-than-ideal product development.

YC’s focus on longer-term planning coupled with community input and product usage metrics is right on target. This is the only way forward for a company in Zwift’s position, that is:

Casual vs Hardcore, Growth Over Development

Simon asks YC is Zwift is prioritizing the “casual cyclist” over the more hardcore initial users of the platform. Or to put it another way – if they’re trying to grow the user base more than they’re trying to develop the product. Certainly a pertinent question, given how Zwift pivoted away from development and toward new user onboarding/customer support during the pandemic.

But YC pushes back a bit, making the case the growth and development are not a dichotomy – that Zwift doesn’t need to choose between the two. He says, “We should be able to do more things. We should not have to sacrifice so much… we should be able to satisfy more than one thing.”

Zwift is in a challenging position when it comes to deciding where to invest their resources. It’s easy to play “armchair quarterback” and pass judgment on the features and bugs Zwift is or isn’t working on. But as YC explains, Zwifters come to the platform for a variety of reasons, and, “For us, it’s about trying to support the diversity of motivations and things that people are trying to get out of Zwift.”

YC talks about how Eric Min pivoted the company to a “product-led” focus, and YC’s appointment is part of that pivot. What does it mean to be product-led? YC defines it as “Focusing on trying to deliver the best experience.”

Again, YC brings up the community in this conversation, stating how vital it is that Zwift is “intentional about having a collaborative conversation with our members.”

“A lot of Zwift’s success is because of how the community has embraced it and helped it move forward.” He’s not wrong!

Is speaking of what the product-led approach will lead to, YC says, “You will see more and more ‘crowd pleasers’ because we just think it’s also the right thing to do.” I like the sound of that.

Simon asks YC if Zwift is working on a new game engine – “Zwift 2.0”, you might call it. (For those unaware: Zwift runs on a proprietary game engine initially developed by founder Jon Mayfield.)

YC explains that Zwift is investing in the games engine quite a bit – in fact, that’s most of what Jon Mayfield is doing these days! But he stops well short of calling anything “Zwift 2.0”. Instead, he sees it as continual improvement of the existing proprietary engine, explaining that “many many successful games have their own proprietary engines.”

What work is being done on the existing engine? YC says they’re constantly working to “Make it more scalable, maintainable, more stable.”

No Pay to Play

YC came from a background working with the World Gold Tour game that included “pay to play” aspects where users could pay real money to purchase better-performing virtual equipment. Is that coming to Zwift?

It’s not, according to YC.

All things to all people, or do one thing and do it well?

Simon queries YC on where Zwift is heading in the fitness space. Are they wanting to embrace multiple sports – running, rowing, maybe even golf, etc? Or are they focused on doing one thing well?

YC answers that near term, Zwift is focused on cycling.

This answer may not please the runners on the platform – or the rowers. But cyclists make up the vast majority of Zwift’s userbase, and if Zwift can dial in the experience for cycling, much of that learning and development work can be applied to other activities in the future, if Zwift ever decides to expand its activity list.

When asked why Zwift is putting so many resources into developing its own hardware, YC first makes the case that, relative to the size of the company, hardware is actually quite a small part of the budget. And he reiterates what we’ve heard from other Zwift execs, that Zwift wants to continue working with their hardware partners (think Wahoo, Tacx, Elite, Saris, etc) in tandem with developing their own hardware.

Why the focus on hardware? YC sees it as an important part of Zwift’s future success, because if properly done, hardware could help solve the challenge of Zwift accessibility. As YC says, right now, “It’s very hard to onboard people.”

This isn’t news to Zwifters, of course. We’ve all experienced the challenge of ascending Zwift’s learning curve! What do I need in order to Zwift? Which trainer should I buy? How do I hook these things up? Why am I having ANT+ dropouts?

The challenge of setting up a stable Zwifting environment has turned off many potential Zwifters. Some never signed up because they were overwhelmed. Others signed up but found the experience too challenging.

ZwiftHQ knows there are struggles. At least, they see the “big picture”. But YC says something interesting, in making the case for Zwift building their own hardware: “We’re not learning enough. We do not understand the pain in solving the problems for new Zwifters and existing Zwifters. This is our best way of improving the experience, learning… and I think it’s going to be a positive for everyone.”

That’s an unexpected reason for building Zwift hardware: he is essentially saying Zwift needs to have its own hardware so they can truly understand what makes onboarding new Zwifters a challenge. While I agree Zwift will get to experience the joy of fielding many tech support requests if/when it releases its own trainer, if the goal is simply to smooth the onboarding process, it seems like some focus group work would accomplish the same thing much more quickly and cheaply.

Is Nimble the Goal?

One common complaint among Zwift faithful in recent years has been that the slow pace of development. Simon says “even the most dedicated fanboys would struggle to characterize the company as agile or nimble” and he wonders if YC agrees, and if that’s something that he wants to address?

The thoughtful answer from YC is, “Is nimble really the goal? Is Apple nimble? But yet they deliver excellent experiences at a regular good pace.”

Fair point. In the early days, Zwift was much smaller in terms of the game itself, the userbase, and its staff. There was a comradery there and a sort of startup zeitgeist which no longer exists. And that’s OK. Zwift is much more established now, and that means new features will take longer to develop – but if they’re done right, they will improve the game experience for a huge number of users.

YC reveals that Zwift has hired over 200 people in the past 12 months. Wow!

He also talks about how the development team’s culture has been changing. He characterizes it as, “Fail fast, learn, iterate on things, so we can innovate.” That sounds a lot like what I’ve heard from Lead Game Designer Wes Salmon over the past couple of years.

In past years Zwift has said they’ve struggled to hire the necessary game development team due to competition from larger game houses and the need to be located in Long Beach. YC says this too is changing – Zwift is now recruiting from all over the world, and everyone is working remotely. Zwift is also “working with outsourced agencies famous in gaming so we can flex more.”

We may not see the effect of an expanded development team overnight, but YC says the processes and teams they are building will result in a sustainable pipeline that will result in quality features in the future.

When Simon asks about why it seems certain projects launch with a basic “MVP” (minimum viable product), then don’t see much further development, YC explains that it’s easy to create an MVP, but long-term, sustainable, hardened features take a massive amount of work.

As an example, YC explains that the wildly successful Pace Partners feature initially ran on someone’s laptop from their home. Crazy, right? But kudos to that Zwift developer who overcame lockdown craziness to make a new feature come to life from his home office.

YC acknowledges that results-based race categorization is still a goal. But it definitely sounds like it’s not happening any time soon.

“We’re moving more towards a system that a lot of people had theorized and written long articles on and trying to be much more focused on outcome-based categorization. And that is going to take more time for us to implement and understand.”

Throughout the interview, YC mentions how he reads the Zwift forums, wants Zwifters to use the forums, etc. In fact, YC says he reads them every day, and that the forums are the most constructive place to have conversations.

Zwifters who are plugged into social networks know that we’ve had Zwifty conversations on Reddit (a favorite haunt of Jon Mayfield’s), Twitter, Facebook (home of the 86.7k member Zwift Riders group), and email. But ZwiftHQ clearly prefers the forums as a way to interact with members. That’s where they’re putting their energy when it comes to communicating.

Listen to the Full Episode

What do you think of YC’s interview? Share your thoughts below!

Wow. Lots of stuff there. And lots to comment upon but I’ll limit mine to just a few points. I don’t understand the new hardware initiative either. If Zwift would just apply themselves to making existing hardware work it would obviate the need to build Zwift specific trainers and accessories. The Forum? First of all, there are about 20 people posting regularly on there. OK, probably more but it is such a small subset of Zwifters that I don’t know how they can take it seriously. And Zwift interacts with the community extremely irregularly to the point of it’s just… Read more »

Your comment mirrors my experience as well. I’m thinking of cancelling Zwift, it’s the only thing that will get their attention.