What’s Going On with ZwiftPower.com? 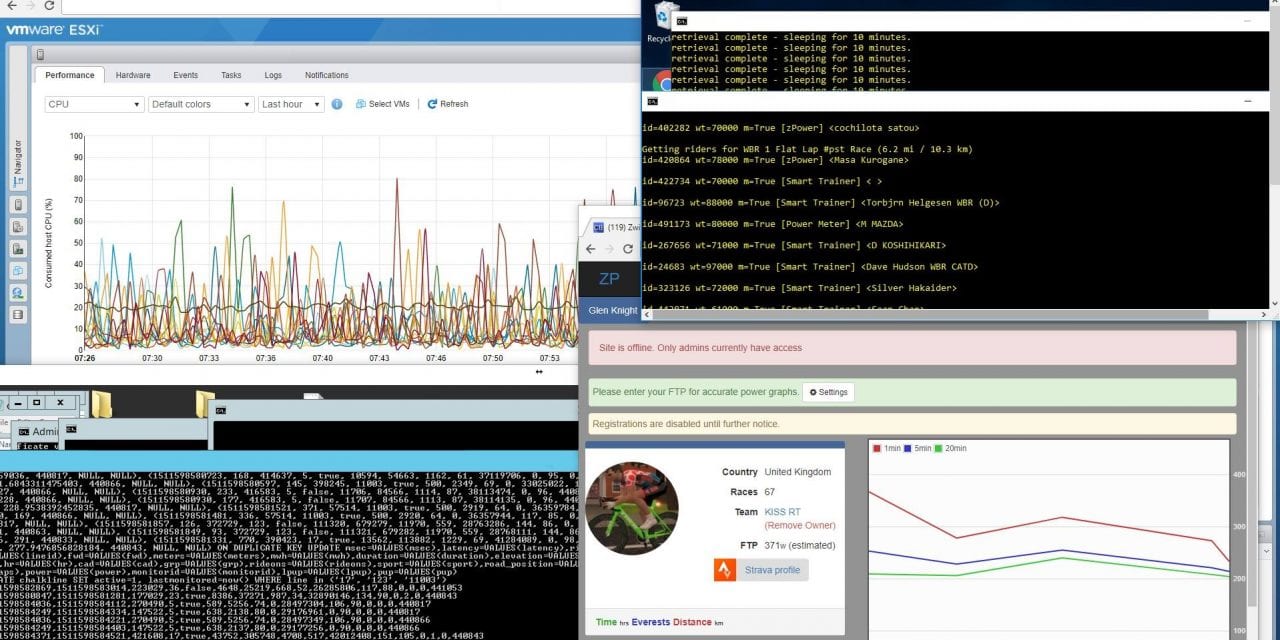 ZwiftPower.com is a community-driven website used by Zwift racers and ride organizers to track results and see rider/team details. Recently the service has been interrupted, and I thought it would be helpful to chat with Glen Knight, one part of the ZwiftPower crew, to learn more about what’s going on.

First, please introduce yourself. I know you’re a part of the KISS Race organizing team, which led to you working with the ZwiftPower team. What do you do at ZwiftPower specifically? And who else makes ZwiftPower happen?

Father, husband, wannabe cyclist with 20 years experience in infrastructure and I chose to ply my trade for the good of our education industry. I’m one of the founding members of the KISS Race Series which lead to me approaching James Hodges about how we could replace the KISS spreadsheets result with something more automated. We worked with Jonathan Lemon and Christian Wiedman to put the building blocks in place for what we have now (editor’s note: read more about Lemon’s zlogger and more here).

My roll is the infrastructure, I look after the backend and all the scripts we run. James will probably tell you I’m the one that says “when you get 5 minutes can you add this feature.” James does all the front end work and Christian the capture/translation utilities that I use to collect the data.

For those unfamiliar with ZwiftPower, can you explain from your point of view what it’s all about?

I see zwiftpower as an enabler that has seen the explosion of events on Zwift by the community. James is constantly adding features that make race organisers’ lives easier. But more than that, we want zwiftpower to become the community race portal.

And ZwiftPower isn’t a ZwiftHQ entity, even though you work closely with them when it comes to gathering data. What sort of relationship do you have with ZwiftHQ, and do they support ZwiftPower in any way?

We do have a good relationship with the Zwift team. We often discuss changes and future enhancements. Zwift helps cover the cost of the infrastructure we use to run zwiftpower as well as helping with guidance and advice when things like this our current issue (see below) come up. We’ve also recently worked with Zwift for results on the eCrit series, and there are more projects in the pipeline.

ZwiftPower.com is the first place I go after finishing a race. But it hasn’t been displaying race results (or rider data) for the past several days. What’s going on?

With the race portal in mind, we instigated the Zwift Riders Verification Group (ZRVG) in an attempt to clean up racing and start investigating suspect rider performance. To achieve this we started displaying more data and more historical information. It was brought to our attention that we didn’t have permission from riders to do this and a legal objection was made.

Because of this we made the decision to take the site offline whilst we sought legal council. That’s an ongoing concern we are dealing with.

Zwiftpower’s watchers are still collecting data. James is taking advantage of the downtime to do some major upgrades to the backend of the site and we are making more progress on moving the entire infrastructure to new hardware. Race results will be re-processed once the site upgrade is complete.

Awesome! So the new ZwiftPower will be even better than the current one… which is hard to beat.

I know the ZwiftPower team has been adding more cool features to the site lately. Can you tell me anything about what you’ve got in the works, once the current issues are resolved?

Mostly James’ work and mostly unseen, sadly. Some of the things you can see will be a cleaner and less cluttered site, instant automated results, more league options, updates to the rider profile page to include KOM history, and hopefully better performance and stability from the backend.

You just released a “low data” version of ZwiftPower today. Can you tell me more about that?

The low data version allows organizers and racers to see results but removes any personal/non-public data. The site will remain in this format until we have sorted out our terms and conditions. Once we have that in place the default for riders will be hidden until they agree to the terms and conditions then it will display the data.

Not agreeing to the terms will lead to removal from results and ineligibility for points/prizes. I’d hope organizers would encourage racers to agree to the conditions. KISS for example will stipulate it as a requirement to appear in the results for any race of our series.

What, if anything, can Zwifters do to help the ZwiftPower team?

At some point in the not too distant future we will be asking riders to fully register with zwiftpower.com, link their Strava and Zwift accounts and agree to new terms and conditions. We’ve had to take the step of hiding data for riders who have not agreed. This would remove them from the results. So we are asking Zwifters to show their support and to complete these tasks as quickly as possible when available. We will also be asking organizers to encourage their riders also.