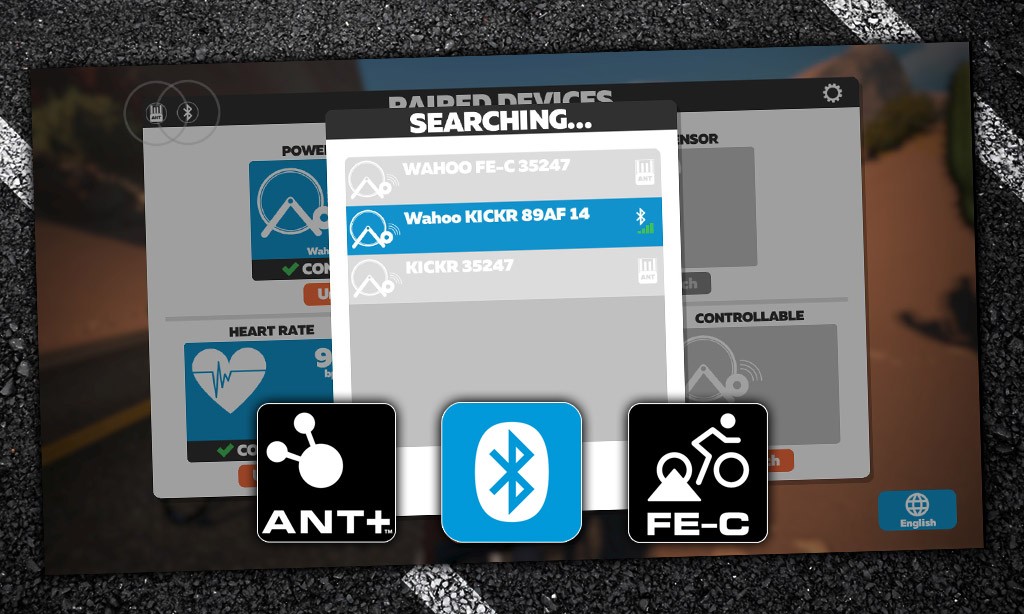 Wahoo KICKR owners: have you noticed Zwift prompts you with multiple connection options on the pairing screen?

If you only use Bluetooth (AppleTV, iOS, Android) then you’ll only see one option. But ANT+ users will actually see two different ANT+ profiles: one that begins with “WAHOO FE-C” and another that begins with “KICKR”.

ANT+ users who also have Bluetooth (or Zwift Companion) enabled will see a total of three profiles:

The ANT+ connection which doesn’t include “FE-C” is a legacy (older) connection that uses an ANT+ scheme developed by Wahoo prior to the FE-C standard being adopted. (Wahoo wasn’t unique in this–all the smart trainer makers had their own proprietary communication methods in the early days.)

The Bluetooth connection uses a proprietary Bluetooth Smart implementation since the KICKR, like many smart trainers, doesn’t yet use the newer Bluetooth FTMS standard.

There are two strange issues we’ve noted with the legacy ANT+ connection.

First: we’ve heard from other Zwifters (and experienced ourselves) that connecting to this profile as a power source can cause dropout issues. (We note this in our ANT+ Dropout Troubleshooting post.)

Secondly: here in the Zwift Insider Lab, we’ve noticed that this legacy ANT+ profile is always found first on the pairing screen’s “Controllable Trainer” box, which means Zwift automatically pairs with that profile. Sometimes the FE-C profile won’t show up for a minute or more, in fact!

Not that the power accuracy was wrong. Just that the “base resistance”–the amount of resistance the trainer gave us at 0% trainer difficulty (like riding a flat road) varied between each connection method.

Or was it all in our heads? We decided to do a little testing.

We headed out to Fuego Flats, turned our Trainer Difficulty down to 0, and rode for a minute or more at a steady cadence of 90 without shifting. We did this for each of the three connection methods. Here’s what we found:

Interesting results. There is definitely a significant resistance difference between the industry-standard ANT+ FE-C protocol and the older one which Zwift implemented for the KICKR back before ANT+ FE-C became a standard. A difference of ~15%!

Interestingly, the legacy ANT+ method tests out to almost the same average watts as the proprietary Bluetooth method. Which makes sense, because both were proprietary implementations from Wahoo. The important takeaway here is: connecting your KICKR via Bluetooth results in significantly lower base resistance than connecting via ANT+ FE-C.

This isn’t an industry-shaking revelation or a huge deal in the grand scheme of things. But it’s worth knowing if you, like us, get close to running out of gears on descents or while sprinting. You may be able to switch to the ANT+ FE-C connection and get a little more resistance, making your setup work just a bit better for you.

In the bigger scheme of things, isn’t it time for industry-wide standards to be implemented on ANT+ and Bluetooth? Make it happen, Wahoo and Zwift!

Have you noticed a difference between resistance levels when connected via ANT+ FE-C compared to Bluetooth? Share your experience below!

Note: the original version of this post referred to Wahoo’s Bluetooth implementation as FTMS, but we later learned that the KICKR (mostly) uses a proprietary Bluetooth Smart implementation. We’ve updated the post above to reduce confusion.

When having dropouts, Zwift support always recommends using the FE-C profile. And most importantly, no matter what you choose, use the same for both power and controllable trainer.

Mick Such
Reply to  Simone Chiaretta

Eric, I use the Elite Drivo and have both selections on the Ant+. Zwift recommend the FE-c and 90% of the time it connects automatically to this. But occasionally I find it connects to the old Elite Drivo – I then find that I spin out on hairpin bends on steep climbing routes and then realise that the trainer is not connected correctly. On the FE-c I have no issues. Zwift have said that they would be removing the old connection from Zwift in an update. But this has not happened yet. I just use Ant± not Bluetooth connection as… Read more »

Yes! I worried this was all in my head, but I just experienced this while traveling with trainer over Thanksgiving. I have always connected at home using ant+ fe-c to my PC. While I was visiting family I used BT for the first time on a laptop. I noticed that I was almost always running a gear or two higher (smaller sprockets on cassette) to get to my sweet spot. I was worried I had suddenly run out of gears! Since coming home I’ve gone back to fe-c and everything is “normal” again. Thanks for running this test, saved me… Read more »

Eric, this is big news for those of us running kickrs on Apple TV. Thanks for bringing this up. Have you reached out to Wahoo?

Are these results relatively consistent across the 3 connection types for different trainers other than the Kickr?

DC Rainmaker states that Wahoo doesn’t yet support the Bluetooth FTMS standard. Based on that information the Bluetooth tested here would be Wahoo’s proprietary Bluetooth trainer control protocol and would make sense that it aligns closely with their proprietary ANT+ protocol.

Shawn–you are correct! I updated the post above. Nice catch.

The v5, 18, and Core now all support FTMS. Time for another test?

Too bad you can’t connect with all 3 and avoid all dropout issues.

Based on the above power readings which one was actually correct? Did you do any comparison between them 3 and an independent power meter?

It’s not a question of power accuracy–it’s just a difference of base resistance. All three methods are just as accurate.

Is the proprietary Bluetooth the reason for drop outs? Mine was so bad that wahoo is replacing my kickr. Would it be better once they implement ant+ on Android?

More testing is needed but it could mean zwift is using standard weight resistance instead of the rider’s personalized weight resistance when using Bluetooth in regular mode. It could mean ftms is more important than we thought for a realistic feeling ride. Could you be able to test with another trainer that fully supports ftms and we know zwift is using ftms?
Thank you.

Great article! I’m glad I finally found proof that there are resistance issues with Kickr connecting to Zwift. I’ve noticed it after an update several months ago: One day it suddenly felt more difficult to turn the pedals. No amount of spindowns fixed the problem. I typically ride with “base resistance” during warmups or workouts without ERG, and noticed I was running a gear or two higher up the cassette than I was before. I’m not sure how much it is affecting the races when I bump the trainer resistance up to 30 or 40%, but I am now sprinting… Read more »

Do you know how it affects power match and latency when using a separate power source, and using the kickr as the resistance controller only??

All I know is when I connect the Kickr to my Element Bolt with a workout or a route with similar gradients on Zwift the Zwift feels allot more Harder than the Element device controller. Don’t understand why but Zwift should link up with Wahoo and resolve this issue. Cause ultimately they are the ones charging a monthly subscription with faulty protocols or resistance values.

Dan. Do you have trainer difficulty on Zwift set to 100%? If not… there is your answer.

I can’t get the inride to detect the wahoo bluertooth sensor at all. I’m using it with an ipad.

Same findings here, but I am also getting frequent drops on my ANT+ (dongle+cable to a Macbook Pro) all of a sudden. I am thinking that ANT+ as a protocol is reaching end of life and it would be a waste for me to try replacing it – so I am making the best of BT. Also @Kari I tried messing with the trainer difficulty in Zwift. The problem with cranking that up is it also reduces the downhill resistance to nothing…which I don’t want – so that adjustment helps, but isn’t the answer (for me anyway). Hopefully Zwift and… Read more »

I have an I Vortex Tacx trainer with blue tooth. but it will not pair with the Zwift app.
Thoughts?

I have a kickr core and not (yet) a BT dongle over PC so i use the Ant +dongle..i am only seeing the FE-C connection.
It seems i am having 2-3 seconds sticky watts ? Does it helps to change to BT?

Thank you so much for this article, I thought I was going crazy! I usually connect via BT but lately BT hasn’t been working so I’ve been connecting via ANT+ FE-C and the resistance is very noticeable, it definitely feels like I’m running out of gears!

Having just taken the latest Wahoo Kickr Bike firmware update, v1.22.0, which implements FTMS over bluetooth, we have noticed that we are now having to select 2-3 gears lower to get the same pedal feel. I initially thought that it may be the Trainer Difficulty that has now appeared coinciding with this update (I noticed similar on old Kickr Snap when using phone vs PC), but it does the same at 0% incline so probably not that. This article sheds new light on a possible cause. Thankfully the Kickr bike has programmable gears so I can configure a new set… Read more »

An update to my post. Having done several rides having reduced the Wahoo Kickr bikes virtual chainring teeth by approx 15%, we both find that we are using the bikes gearing in a similar manner to before the firmware update. Gear 2-9 is back to being both our goto gear for the flat and that whilst having not yet done a sustained >14%, from slightly lesser inclines there is no longer the feeling that we will run out of gears on the tough climbs. An added benefit of going to smaller virtual chainrings is that when previously we had some… Read more »