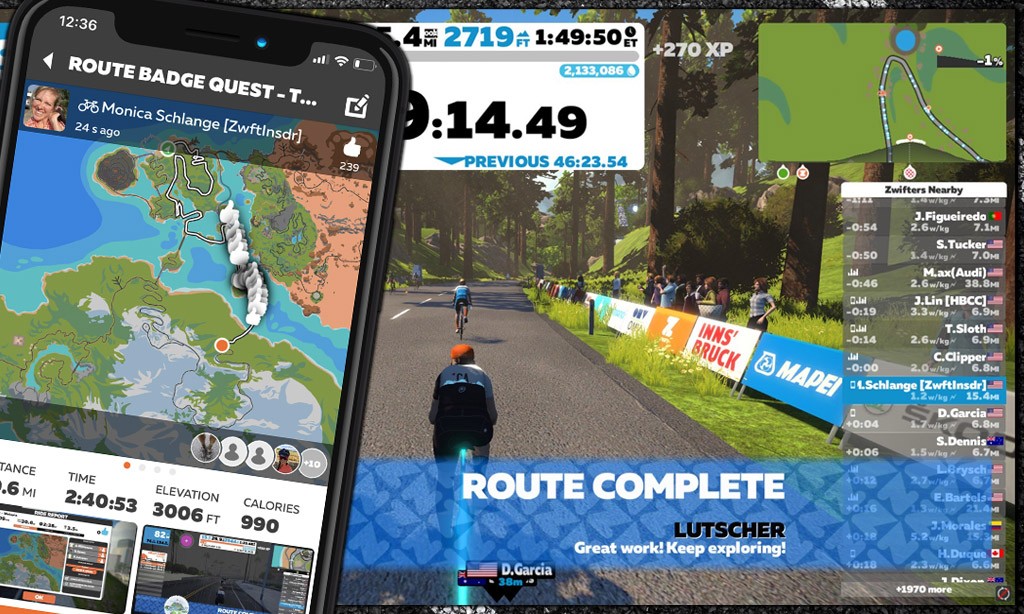 Looking at the schedule for this week was daunting. But I took it one day at a time. As each difficult ride ended I realized more and more that I’m the most amazing cyclist in the world!

How the Week Played Out

This week I rode 98.12 miles, climbed 8,360 feet, with 7 hours and 52 minutes in the saddle. In about 12 weeks this quest ends with the PRL Full route. Oddly enough, this week’s entire effort looks similar to that one final PRL Full ride. Lord, have mercy!

Routes I completed in week 3:

Lutscher has got to be some cruel joke someone at Zwift HQ is playing on all of us. The lead-in to the segment is a climb to the top of the ~1400′ Innsbruck KOM. which means to finish the route you end up climbing the KOM a second time! “We get it ZHQ! You have all the power!”

The ride started out painful enough… climb, climb, climb. I hoped to entertain myself and maybe others too so sent a message to those on the mountain with me. “Anyone else feel like it’s going to be your resolve that gets you up this mountain more than your legs?” Two guys agreed. And from there it was a conversation of encouraging each other up the climb. Or distracting each other. Either way, it worked! What a way to start the week!

Is there anybody out there?

For my four bidon route I decided Watopia’s Three Sisters would do. About 3 miles into my ride I realized I hadn’t received a single Ride On. Strange! I did some poking around to make sure nothing was wrong on my end of things. And then I remembered… I’d noticed this had happened once the week before. My Ride Ons didn’t show up until the end of my ride.

I didn’t really know how much I enjoyed giving AND receiving them until it was a big fat zero. Especially on a long ride! This may seem silly, but oftentimes I’ll say the name of the person who gave me the ride on, and/or will salute and then push myself just a bit more. So riding without them was sad. AND I wasn’t getting extra Drops from them either! “Add this to the list of changes that need to be made, ZHQ. Remove lead-in for Lutscher, and let Monica see her Ride Ons during her rides. kthxbye.”

As I rode up the Epic KOM in Watopia another rider reached out asking what route badge I had picked for the day. He was doing the same one! It was fun to keep in contact. At times I’d even watch his ride as he was much faster than I. It was entertaining!

When my ride was over I checked the saved activity in the Companion app. I had received over 200 Ride Ons!!! I knew I was well-loved!

Which routes did you do? Did you make any new friends during them? Did you find out you’re ALSO the most amazing cyclist in the world? I know I’m not the only one standing at the top of this, the world’s largest podium!

Looking at my Zwift badges, we could say I’m an amazing cyclist. However, compare to the millions of cyclists on Zwift, I’m just a drop in the Ocean. Up until recently I just had one route missing in my badges collection. But recently some new ones popped in (they might only be running ones). Good luck in achieving your dream and challenges!

Given that Zwift added 42 new badges during the first week of December, I would say you are in a pretty small group of riders who have completed all badges 👍. I’m chipping away at my list but not looking forward to that 173 km London badge 😬.

Same, Kari! We’re hoping to do some sort of group ride on a Saturday in March to fulfill that London PRL Full badge!

I definitely can’t compare myself to anyone else or I’ll be sad and will give up! My ftp is something like 165. We’re each on our own journey and we’re all amazing cyclists! 🙂

Way to ride Monica. Congratulations on sticking to your plan. I do feel like the most amazing rider, until it comes time for a race, or a climb, or on the flats… but my misery is short lived and I remember that I love riding my bike. This week has been tough. I missed my TDZ Stage 4 race due to other priorities. I haven’t ridden TDZ Stage 5 yet, and I’m already dreaming about the Gran Fondo in February. I need to focus! I have also had the same mystery zero Ride On scenario happen and it sucks. I… Read more »

Oh yeah, focus is key! I used to chant to myself as I was passed by other riders “You do you, Boo!” haha!

I’ve not done the meetup with the rubber band because I want to make sure I’m the one who gets me up those hills or through those miles. Then again, I don’t always make the best decisions (like signing myself up to do all of these rides in 11 weeks!) so maybe I should do a rubber band group ride! haha!

Lutscher CCW is even a worse of a cruel joke. And to add insult to injury the badge XP calculation doesn’t include the lead in miles so bonus XP is really low for the mileage of the ENTIRE route. I have also had the “No Ride Ons” issue on several rides. Makes me feel like I don’t exist. Many times I work harder when I am getting the additional drops because it is fun to see the meter spin fast 🙂 On a more positive note: Way to go on week 3!!! You are an inspiration to many.

Thanks, Edward! It’s good to know I’m not the only one! I’m scheduling out my February now that the schedule as been posted. Not too thrilled about having to write down Lutscher CCW! Then again, I’ll be wishing that’s all I had to ride on some of those 5+ bidon route days!

I just do them as i can- and tick them off- sometimes so tired from work- i miss a day i enjoy them not training or racing just riding along- edinburgh weather foul right now.

Yeah, I’m wondering how hard it’s going to be to keep at this when the weather is nicer outside!

A week ago I got Big Loop by using the Tour du Zwift State 3 group ride, it definitely helped a lot and actually skips a small part at the start of the solo ride route, especially as I joined late and it took ages for Zwift to dump me in with a bunch of riders. Pretty sure you still get the route badge if you join really late, useful to know! I fell off the bike on Saturday, landed pretty hard and banged my knee, it’s quite swollen, lost a bit of skin and ruined a nice warm cycling… Read more »

Sorry to hear about your fall! I can’t imagine doing all of this while injured! Keep at it, but be kind to your knee!

Monica, you are amazing! I needed the motivation to get back on the bike and your challenge has inspired me! I’m little behind you, I only started my challenge on Monday but so far so good! Your weekly blog’s are the pick-up I need when my motivation starts to dwindle. I’m trying in these early, easier days to catch you up!

So glad to hear! You’ve now motivated me back! I said to someone else recently: “Together we’re stronger!” It definitely feels that way on this quest!

Lutscher on it’s own is okish… the real cruelty is the fact that there’s also a CCW version. I did a quick count an the regular freeride routes requires us to climb “the big climb” a total of 7 times (4 forward, 3 reverse) in just 4 different routes. I’m going to follow your efforts in the following weeks. I’ve been in a bit of slump in recent week and my time on the bike has been suffering, taking on this challenge might put me back in the right mindset to put in some consistency in my training efforts. Starting… Read more »

Awesome! Keep me updated on your efforts! Ride yourself right out of that slump!!

Way to go girl!!! Do you post your list before the week? Might get folks to plan ahead & accompany you. Is it possible to broadcast your PRL Full Ride so folks can watch? That could break a Ride On record? 😉 Oh, yeah…Ride On!!!

Hey Beth! I don’t post ahead of time for various reasons, but in part because life at home is constantly changing (we have two teens, enough said?) so I can’t commit to exact times very often. But I am hoping to schedule a group ride for the PRL Full so others can join in. I hadn’t thought about broadcasting it. I suppose it would end up looking like an 8-hour long slow death. “Here she is all prepared and nervous….and here we are 8-hours later with her hanging half off the bike while pushing her own knees down with her… Read more »

soon March.. and time for the PRL Full i guess? Do you know what Saturday your planning this, it would be really fun to join. I’m not looking forward to the route, but I “have to” do it to fulfil my plan, and it would be easier with company. You are a true inspiration! thank you making me take on this crazy challenge of doing all routes. I really enjoying it (except Innsbruck…). Best regards Maria

Well done Monica, I’ve just done (yesterday, GMT) day 10 and picked up my “addicted” badge earlier in the week. I should hit the 14 day badge on Wednesday but have a 3 bidon ahead of me today.

Lutscher sounds a bit like NY’s Highline where you have a long lead in to the NY KOM but the route doesn’t start until you’ve gone through the KOM banner. I have however noticed some of the London routes now start on The Mall rather than near Tower Bridge but the map hasn’t been updated.

You’re doing great with this. I was that rider that battled through the 3 sisters with you. I was faster purely due to being stuck within a particularly taxing workout, the penultimate one of the build me up plan – aspire, only recommended for the masochists out there!

I certainly think you’re inspiring a good many people and you’d get a good bunch jump on to any group ride you can organise.

Good luck with the rest of that odyssey, not that you need it, you’ll smash it!

Yes! Flex! Hello! Thanks for the encouragement that day, AND here too! It’s so much better doing this with people!