Racing on Zwift – Challenges and Opportunities for Riders (continued) 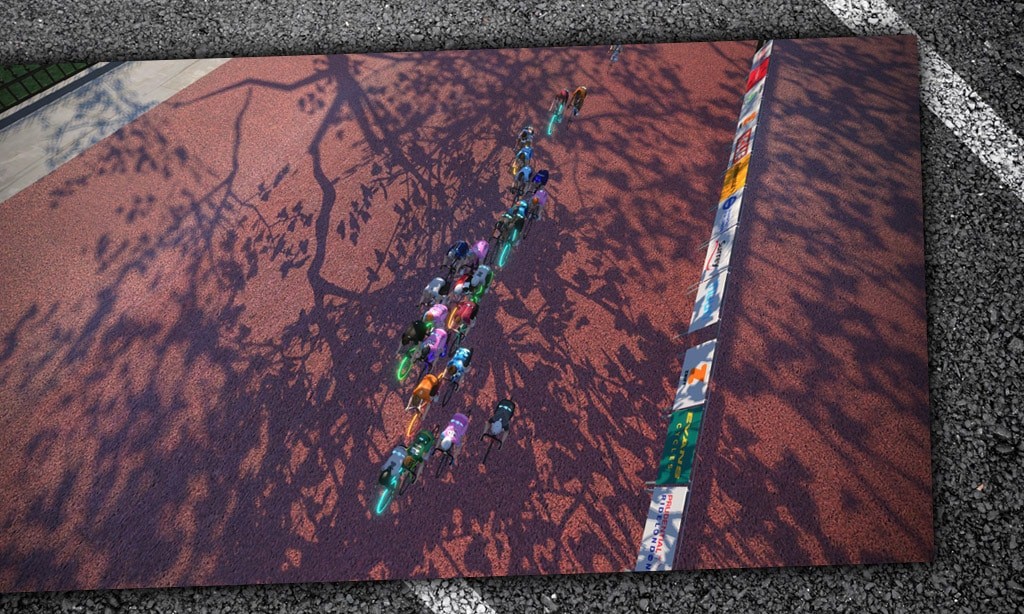 This is the last of a three-part series exploring Zwift racing’s challenges and opportunities. Part one focused on spectating, part two on broadcasting, and part three on the actual race participants.

Today, in the final post of this series, we continue part 3 by taking a look at the actual in-game experience for Zwift racers–things like teamwork, pack dynamics, race visuals, etc. What’s working, what isn’t, and how do we fix it?

In Zwift races, the “blob” (peloton) is a churning mass of riders constantly trading places at the front. This results in:

Could Zwift implement a “draft feel” feature, where your smart trainer’s resistance gets bumped up to indicate that you are in the wind? This may make pack positioning more intuitive and realistic.

There has also been talk of implementing some sort of steering mechanism. This was actually part of the original game Jon Mayfield created, but was scrapped to keep the interface and experience simple and easy. I’m not sure I want to hassle with using some sort of steering controls while Zwifting, but if my phone could sense the tilt of my bike (which is on a rocker plate) I could easily steer with it.

The double draft is more realistic than Zwift’s “standard” draft algorithm, but it has a fatal flaw: packs move too fast. When you are saving even more power in the draft, and that is coupled with the front churning (see above), you end up with pack speeds which are (in my experience) 2-3 miles per hour higher than they should be.

What’s the result? Well, entire groups get coned in races as we saw in the KISS Community League Richmond race a couple months ago (this is an obvious red flag telling us double draft pack speeds are too high.) But more importantly, it results in a lack of attacks because riders know they can’t stay away from the hard-charging pack for any significant amount of time.

If Zwift could slow the packs in double draft races we would get more animated events. Riders could sit in the draft to conserve energy, then attack and possibly stay away.

How could Zwift slow down the pack? That’s a question for the programmers!

If you’ve bombed down Alpe du Zwift or even raced London’s Classique route you know our avatars take corners at unrealistically high speeds. Not only does this make your head swim at 55mph, it also makes the game feel less realistic and makes races more TT-like and less animated.

If riders automatically slowed heading into a corner, races would immediately become more animated. Just like outdoor crits, a hard short effort would follow each tight corner as riders worked to get back up to speed. Certainly, some sort of “auto-braking” could be employed to make this happen.

Some riders complain that Zwift racing is just a power contest. Obviously, this is an over-simplification: recent KISS Super League pro races pitting pro riders against experienced Zwifters showed us that experience on the platform is a major factor when it comes to winning. Even knowing which frame and wheelset to use for a particular course gives more knowledgeable riders a distinct advantage.

That said, the complaint holds a bit of truth: Zwift does lack many of the variables found in outdoor racing. This results in more predictable races and, perhaps, a less engaging experience overall.

Opportunity: Powerups and Other Randomness

Modifying pack dynamics (discussed above) would be some help, but even more could be done to make Zwift races less TT-like. Zwift is currently testing an event mode which always gives “useful” powerups (aero helmet, feather, van) at arches, giving racers more opportunities to strategically use a powerup. This is a step in the right direction.

What else could be done? Zwift could introduce new powerups just for racing. Perhaps a Ninja powerup where a rider disappears for 15 seconds, or if auto-braking in corners is implemented, a “sticky tires” powerup that lets you maintain more speed through the corner.

We could also increase the number of powerups given. What if you could qualify for a powerup by putting in a hard effort? Maybe a breakaway off the front would give you a powerup, or a PR on a particular stretch of road (much like Alpe du Zwift works currently), or closing the gap to a group up the road, or setting a new 5-minute critical power PR.

Other randomness could also be introduced. One obvious idea is wind. Outdoors, attacking into a crosswind is usually the best plan, while attacking with a strong tailwind or headwind is less useful. In a game, of course, anything is possible: the sloth could reach down and scratch random riders, slowing them down for a short time. Rain could cause wheel-sucking mud to form, or increase the level of auto-braking into corners. Rock slides could slow the pack. As long as race organizers can choose the level of random wackiness allowed in their events, why not create more options?

No matter how strong of a rider you are, most of your Zwift racing experience will be you, alone, in your pain cave without spectators to cheer you on. For some Zwifters may not be much of a change from their outdoor racing experience at nearly abandoned office parks. But if we’re looking to bring pros onto the platform we need a way to inject some of that spectator excitement into their experience.

Plus, wouldn’t it be motivating and exciting to have others cheering you on, even as a lower-category racer?

Zwift racers who want to take the platform seriously have been streaming for years, building an audience of fans. This will continue to grow as Zwift racing becomes more popular, but I hope to see racer streams somehow integrated into the game so spectators can easily watch live video of riders. Live-streaming your race provides an added level of motivation in itself, knowing others are watching your race effort.

Allowing some level of spectator interaction would also help motivate racers. Currently, spectators can give a racer a Ride On, but that’s it–and it’s not very easy to do! Zwift could start by making the Ride On process easy for spectators, but even more could be done. Why not allow spectators to private message a rider, send audible encouragement (Hammer time!) and more?

Lastly: we’ve got virtual spectators on the streets of London and NYC. Why not build some race-specific blocks of rabid fans who light smoke bombs on our way up the Watopia KOM, or scream their lungs out in the final sprints?

Cycling is a team sport, and Zwift is a social platform. So it’s no surprise that teams have been active in Zwift races since the early days. And yet, everyone knows team dynamics on Zwift are muted compared to outdoors.

Much of this is due to Zwift’s drafting algorithm which makes precise pack positioning nearly impossible (ideas for improving the draft are shared above). But it’s also due to a lack of any team functionality in game.

Teams most commonly use Discord to talk to each other during races, and it works quite well. That said, this is a third-party app with its own idiosyncrasies, and streamlining the racing experience is important. ZwiftHQ has talked about building voice chat into the game, and this would prove quite handy for team racing, as long as you could choose which Zwifters you want in your ears.

Another teamwork-encouraging feature would be some sort of “team powerups.” I recently chatted with Zwift Community Live host Nathan Guerra who shared several mind-bending team powerup ideas inspired from his time in other gaming environments. For example: what if a team could give teammates different roles (domestique, sprinter, leadout man, etc) then Zwift would deliver powerups based on those roles?

You get the idea. More advanced powerups that help teammates when used properly.

Both the audio chat and team powerup features would require some sort of in-game team features where riders could join teams and enjoy a higher level of interaction with those teammates.

The experience of Zwift racing differs greatly from outdoors, but this isn’t necessarily a bad thing. In creating its virtual world, Zwift has the opportunity to create a variety of race experiences… some which mimic outdoors, some which do not.

Additionally, there are clearly many tweaks which could be made to make Zwift racing more animated and strategic for individuals and teams. Many of these changes are already in the works at ZwiftHQ, and it’s only a matter of time before we begin to see them in game.

What Do You Think?

What parts of the Zwift racing experience could be improved, and how should it be done? Share your thoughts below!

Giving race creators the option to fix the “difficulty” at a minimum of 50% and allowing weaker riders to get off and use a run pod on steep hills would give a shot of reality. Being able to just set the ERG to zero makes it very “time-trialy”, especially for races. I understand that heavy riders may have difficulty getting up some slopes, isn’t that how it is in real life, though? Let us get off and walk if we have to. Sure this would primarily effect lower category riders, but again, same guess for riding outside. And I can… Read more »