How to Watch Another Rider In a Zwift Race 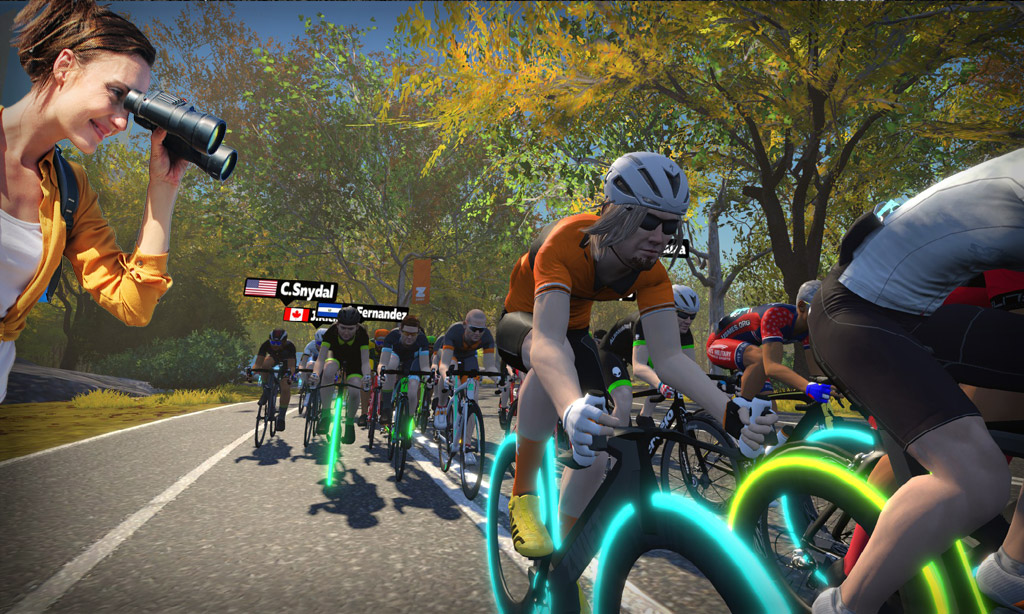 As Zwift racing’s popularity grows, more and more people are interested in watching their favorite Zwifters race. But how can that be done?

Here are your options for Zwift spectating, with notes on each.

If you are currently signed into Zwift and ready to ride/run (that is, your avatar is actually on a particular map) you can use the Companion app to look up other Zwifters and “fan view” them.

This will change your Zwifting view from watching yourself to watching the Zwifter you’re fan viewing. Here’s the 3-step sequence:

This seems simple enough – but there are a few caveats which can throw a hitch in your fan viewing:

Fan view is a workable option if you’re wanting to watch another rider who is in the same world as you, but it needs a few key improvements in order to be really useful.

This trick has been used by race teams for years because it provides a better view of the actual event than the fan view option above. The idea is quite simple: just sign up for event you want to spectate. Join the start pens as if you’re taking part. But when the event begins, don’t go anywhere! Instead, just click on the rider list to “fan view” the rider you want to watch.

This method requires you to sign up for the event before it begins, and you’re not able to jump in late. But if you manage to get signed up and in the pens before start time, you’ll have the ability to watch the race and see the same view as the other riders, complete with current placing, distance to go, and non-event riders being hidden from view.

This is the best option for virtual team cars who generally plan ahead and need current event information to properly support their riders.

Big Zwift events are often live streamed by Zwift Community Live or Zwift themselves, on Facebook and YouTube. This can be a really fun way for friends and family to watch your race!

There are a couple of downsides to this approach – one is that the live stream won’t be following you specifically, so your spectators may not enjoy it much since they won’t know where you’re at in the pack. Also, it’s usually just the A races which are featured in streams, so if you’re a B or lower you’re out of luck.

This is a good option for high-level racers who want to let non-Zwifters (Hi mom!) easily watch their event.

One option more and more Zwifters are turning to is hosting your own live stream. If you run Zwift on Windows or Mac and have a decently beefy system you can run free OBS software to live-stream your Zwifting to the world. Add a decent webcam and mic and you can even overlay an image of yourself on the stream so people can see and hear your IRL pain!

This is still my favorite live stream ever – Justin Wagner of Team ODZ taking the win in the 2017 Team Worlds race, with lots of teammates on Discord:

This is a smart option for tech-savvy racers with more powerful systems.

There are several ways to view other riders in Zwift events, but each comes with its own niggles. Someday I hope we’ll see the Companion Fan View feature improved, allowing us to view any active Zwifter on any map, and to see their actual event view. Wouldn’t it be great if we could look up a rider on Companion, tap to view them, and be popped over to the Zwift app on our phone, live-viewing that rider in their event?

But I’m not holding my breath. ZwiftHQ has told me in the past that there just isn’t enough demand for this feature, so they haven’t invested additional resources into it. And I suppose they’re right – Zwift racers are a small part of the overall Zwift community, and those wanting to spectate Zwift races constitute an even smaller group. So at least in the near future, I don’t expect any changes or improvements to our ability to view others in races.

Hi I have joined up the 4 Week FTP Traing Program is there any Restday in the Week or can I take a Day of myself?

I’m pretty sure those plans don’t have 7 workouts per week – so you get to pick your rest days.

We had a DS do FakeJoin today… worked perfectly.

I used Fan View well for some of the pro races earlier in the year. It was much better than watching the community broadcast, from the perspective of seeing gaps/splits etc, and just who is in which group.

In my experience, when you fan view into an event, you do only see the riders in that event. That has certainly been the case when I’ve been watching teammates in WTRL ZRL in recent weeks.

I would love to see some sort of ‘Zwift Broadcast Dashboard’ where streamers/fans/etc could watch people on Zwift similiar to Fan mode, but with the benefits of race details. Obviously, this exists to a limited extend for Zwift’s internal use for broadcast races, but I think it’d be a great bit to include either in the native app, or a companion app.

I wonder if it’s possible to “fan view” yourself during a race through the smartphone: you have the usual point of view on your computer, but instead of having the companion app open on a “useless” screen, you can have a different perspective on the race. This would be useful too improve your position in the group and preventing having to close important gap…

Just found this, I’ve been trying to watch a couple of my friends for two or three races now

Thank you!!… And not only during the job, but looks like a brilliant job. A+

* doing the job, rather

If you “fake join” a given stage for TdZ what impact will that have on your ability to actually participate in that same stage at a later date, given that there are multiple days/times to ride a given stage? Thanks

No impact. You’re allowed to join and ride (or not ride) as many TdZ events as you’d like.

I don’t see the Fan View button. All I get is one big Ride On button. What am I missing?

Sounds like you aren’t signed into Zwift (like you’re going for a ride). Gotta do that before you’ll get the Fan View option. Companion has to be connected to your live ride.

Tried all that. Signed in, avatar on bike ready to go. Companion app connected. Click on a Zwifter in the companion app, all I get is one big Ride On button.

I bet I know the issue – you have to be riding in the same world as the rider in question in order to fan view them.

I’m doing that now as I type this. It’s just not there, and the app interface does not look like it does in the screenshots in the Play Store. I have no controls, no maps. All I can do is look at past events and give Ride Ons. Support from Zwift on this has been poor.

And finally I figure it out. Put phone on same WiFi network as PC. Duh!

Any idea why when I click “just watch” it always says ‘loading Watopia” without giving me a choice? It seems I have to skip pairing instead, and then go to the main screen and choose a world if I want a different one? Seems pointless having a just watch button if it won’t let you choose the world you want to watch.

For the fan view on the companion app I find it really hit and miss, sometimes it works and sometimes it does not. I’m using android and pc, and in the same world as a friend. There must be some glitch, it says the friend is riding and I click fan view while in the game and same world and nothing happens.