Positioning in the peloton (Skillz and Drillz)

TeamODZ SkillZ and DrillZ Ride – 1 NOV: It’s that time of year again folks.  The Zwift Team World Championship is around the corner.  That’s right, we are in the championship part of the season.  All of the racing and riding that you have done the rest of the year culminate in this.  If you don’t perform here, the last year can be counted as a waste!  Just pack it up and go home!  Watch this week’s class below:

Ok, the intro may be a little harsh and definitely not accurate.  Really the Zwift Team Worlds is just a chance for for the northern hemisphere folks to give it one more go before we officially transition to the off-season… or cyclocross season… or marathon season.  For the southern hemisphere folks, this is a great way to knock off the rust before the outdoor season gets into full swing.  Unfortunately, I will not be partaking this year, as I haven’t figured out how to fly with my setup, and that might be a bridge too far for the family.

As we get ready for the race, everyone needs to take a good look at their goals and their role in the team.  Not everyone is going to be going for the victory, but every point does matter.  Teams cannot afford to have domestiques destroy themselves only to limp home at the back of the field.  Sure, you might get the individual win, but the team will not score well.  No, this is about getting as many of your teammates as high up the finishing order as possible.  Think cross country.  If you don’t know how that goes, watch McFarland, USA, with Kevin Costner.  It’s a great flick and will give you a good example of how Worlds will be scored.

Well, back on topic.  Zwift’s draft is similar to IRL racing, but it is not the same.  The programmers will never be able to make it exactly like the open road, but it is pretty darn close.  Sitting in the middle of the pack or the back of the field means that you will benefit from the work others do at the front.  This is just like IRL racing.  However, there are two major differences.  First, you can’t feather your brakes on Zwift to stay in that sweet spot of the draft of the rider in front of you.  No, you have to manage that with pedal power (we’ll cover that more in a bit).  Second, you can ride through other riders.  Yes, you can go pretty much right through them.  (Please do NOT try that out on the road.  It will have really bad results.)  If you hit the gas in the back of the field you can overshoot the riders up front and simply pass through them.  That is bad.

Now that we have established some significant differences, let’s talk about how we stay in the draft.  This can be particularly tricky, and I have only seen a few people who have mastered this skill.  I am good at it, but I definitely have not mastered it.  The most important aspect of staying in the draft is situational awareness.  You really need to pay attention to what is going on around you.  Here are some of the things you need pay attention to while racing:

Yeah, that is quite a list of things to watch for while pushing near your limits.  You get better at it over time, but you really need to be cognizant of all of those things.  Losing awareness of one of them can completely hose you. 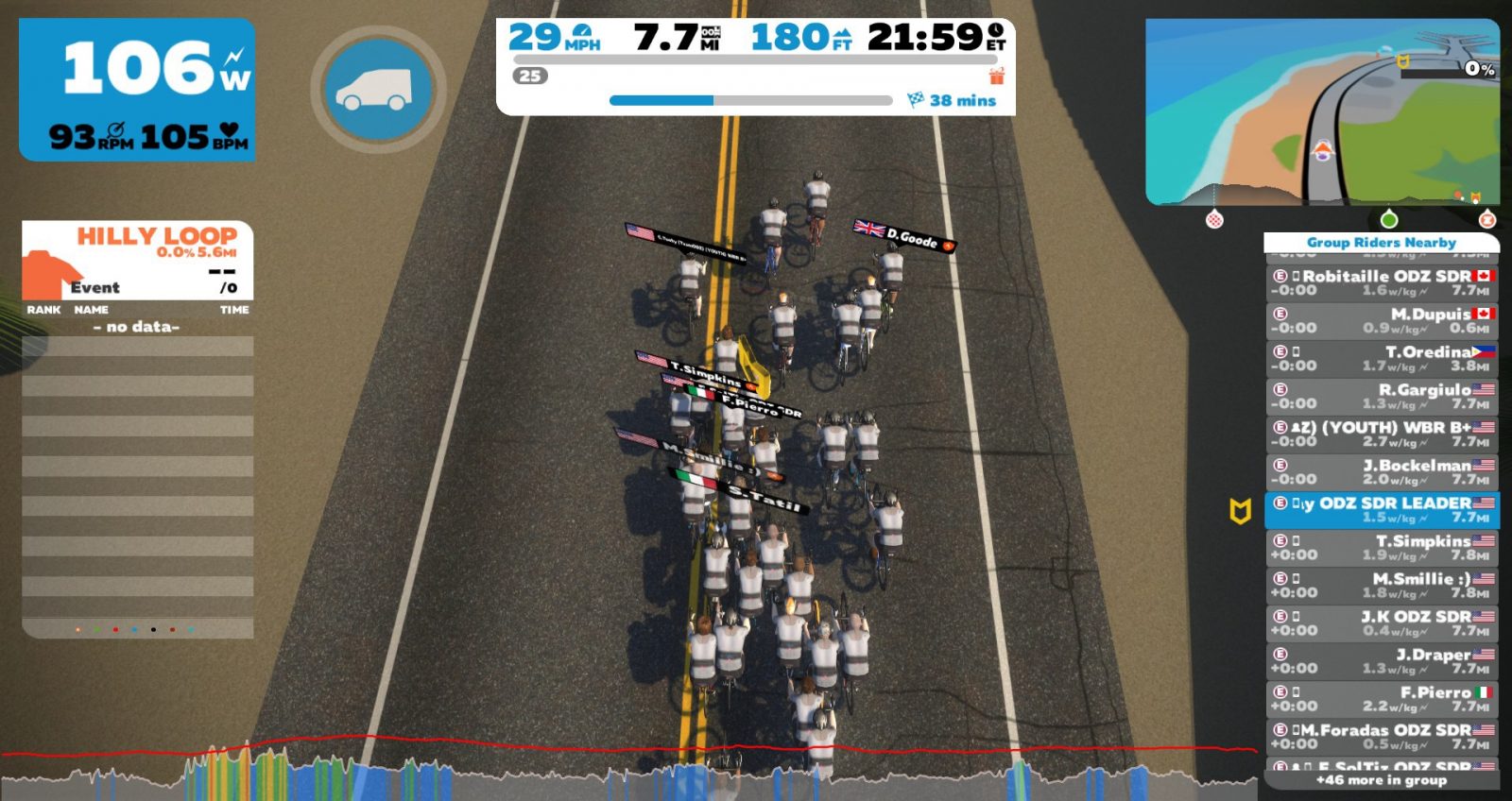 Using your view stay in the draft

First and foremost, you have to focus on staying on the wheels in front of you.  Surprisingly, it is way more challenging than you can imagine.  While riding, you have the luxury of different views, and each has a benefit.  For racing purposes, there are really three primary views:  1, 2, and 3.  Views 1 and 2 give you a good view of your rider and the riders around you, including those behind you.  That is great to see if someone is getting ready to jump you.  Until you become an expert at staying in the draft, though, it is very difficult to do so using those views.  Plus, if your avatar happens to look like a lot of the others in the race, it is remarkably easy to get confused about which rider you are.  (Yes, it happens.  I did it the other day during a workout with some TeamODZ teammates.)

In a large race or event, it can be even more confusing.  Thus, I prefer to use view 3 when racing.  That is the view from your avatar’s eyes.  You lose a little bit of visual awareness of the goings on behind you, but the rider list will mitigate that to some extent.  This view gives you a much better perception of the distance between you and the rider in front of you.  It is super helpful, and it is the view I use for the vast majority of the race.  If I am involved in the sprint finish, I sometimes switch back to view 1 in the last 500 meters or so, but that is only on that rare occasion.

Embrace your sensitive side

Step two is to manage your power output down to a micro level.  Once you get settled in to the pack at pace, the pressure you put on the pedals is hugely important.  I know that sounds simple, but it’s really more complicated than it sounds.  It’s not as easy as simply dropping your wattage output as you close in on the rider in front of you.  As the group settles into the pace that it will maintain for a good portion of the race, holding your position can become more challenging.  Nobody will want to be at the front or the back, but not everybody can be in the same spot.  Thus, you have to fine-tune the art of small pressure changes on the pedals.  It can be something as simple as dropping from 93 RPMs to 87 RPMs over a short period of time or picking up the cadence.  Those small changes are enough to keep you from accidentally overtaking or dropping off the rider in front of you. 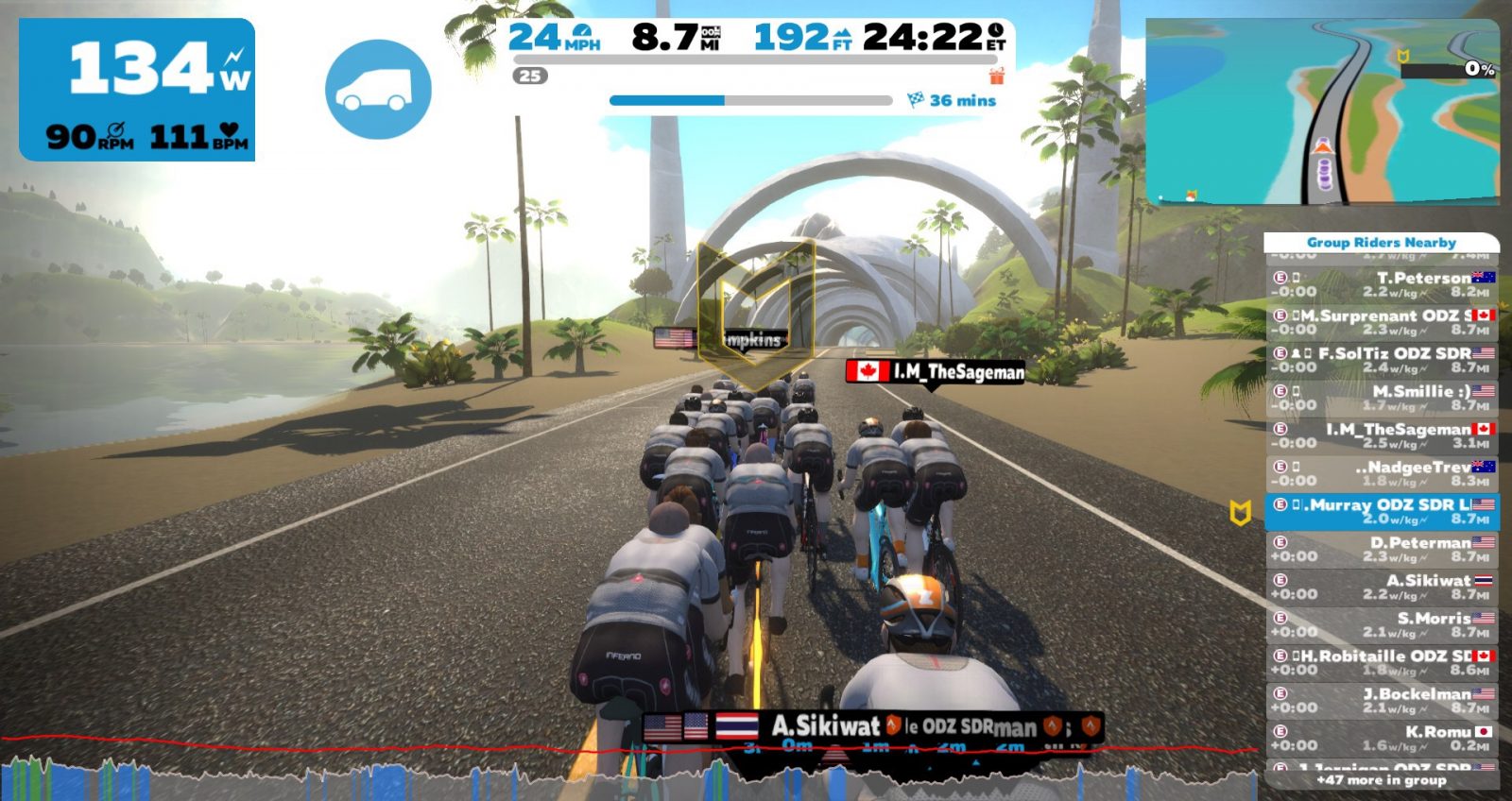 Look for danger up the road

Step three is knowing the terrain in front of you.  Zwift has given us the luxury of showing us the grade of the road we are are about to encounter.  As the road kicks slightly up, many riders skyrocket their w/kg, as the change in resistance on the smart trainer surprises them.  That is a rookie mistake. No, really, stop doing that.  Every time you do this, you are lighting a match.  You may not completely burn it, but you did some level of damage.

When the riders at the front accidentally accelerate, it becomes carnage at the back.  Those at the back often burn one or two matches trying to get back on to the group, and then we are back at the whole overshooting problem again.  Now that you have read my instruction to not do that, I will assume that everyone here is an excellent student who listens and implements.  However, there are still one or two Zwifters who do not pay attention to the SDR lessons.  They cause chaos in the bunch and normally get blown out the back later in the race.  If you keep a pretty vigilant watch on the terrain that you will encounter a hundred meters up the road, you can have a much better sense of when stupidity might strike.  You will be able to monitor your own output to ensure that you are not needlessly expending energy, but you will also be ready in case a number of people do make that mistake or attempt to launch an attack.  This requires some mental training, as you need to constantly scan ahead of you to be aware of danger areas.  Really, this is no different than what you do when riding on the road.  On Zwift, though, we’re not looking for potholes, loose dogs, or random people walking out in front of us.

Mastering your ability to maintain a position in the peloton really matters in racing, as it directly affects energy expenditure and tactics.  My TeamODZ teammate, JWagz, is a master at this.  He routinely finishes with .3 w/kg less than the other riders in the front of the race.  Oh, I forgot to mention that he wins most of those races, too.  Yeah, that’s right.  He averages nearly a half watt per kilo less than other riders and still beats them!  He’s strong, but he’s not “Hulk Smash” strong.  He uses his brain to save energy to use it when it counts the most.

As for tactics, we did a little drill at the end of this week’s ride to show how positioning matters when attacking.  The group rode at a constant 2.0-2.5 w/kg, and riders attempted to attack the group from different places in the peloton.  Despite some of the riders going all-out, they could barely get off the front after ten seconds of dead sprinting when launching from the back.  An attack is not going to be successful if you are completely spent before you even get a gap off the front of the group.  Holding a front-third position allows the rider to benefit from the draft before attacking and use it to slingshot off of the front during the attack.  Trust me, it matters. 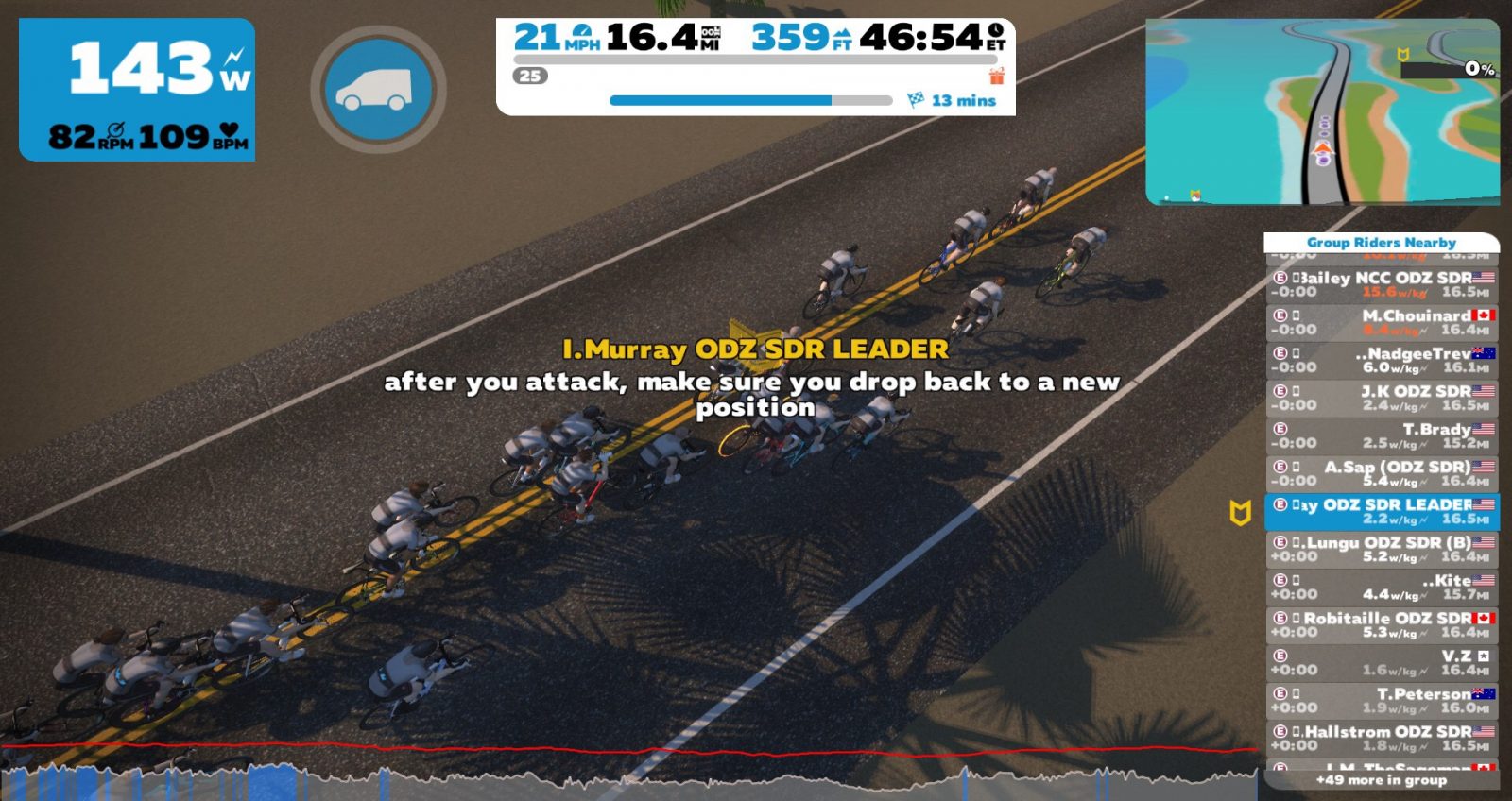 The road to Worlds

While we won’t have anymore SkillZ and DrillZ Rides prior to Team Worlds (sorry), you can still practice these critical tasks.  During your next ride, put some effort into paying attention to the road ahead and see if you manage your gearing to the point that you do not increase more than .5 w/kg when you hit the small rises.  It’s tough, but it is definitely doable with a bit of practice.  Likewise, try to make some small pressure changes on the pedals that result in only a small change in your power output.  Those micro adjustments will serve you well when trying to hold the wheel of a steady rider.

Well, that is going to wrap us up for this time.  Good luck to everyone racing in the Zwift Team World Championship.  We’ll be back on 29 November for another class.  Until then, Ride On!

Ian Murrayhttps://www.endurancelab.fit
As a cyclist and triathlete for the last 16 years and a coach for the past 6, Ian has competed at national and world championship endurance sports events and served as a loyal domestique on cycling teams in both the US and Latin America. Ian is the owner of Evil Elf Racing Endurance Sports Coaching and of The Endurance Lab, and is a member of Team ODZ on Zwift. Follow on Strava