Pedaling Through Parenthood on Zwift 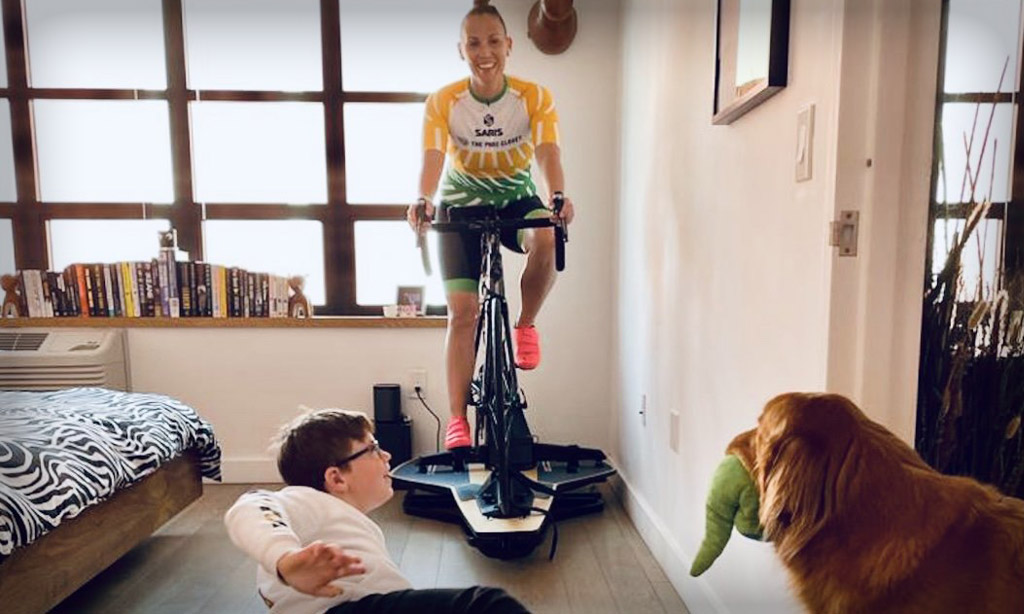 The gentle whir of the trainer lulls the dog by my side to sleep as my bike pedals turn to the tempo of the music in my ears (I stand by my choice of awful tunes when I’m on the bike — ‘90s one-hit wonders produced some absolute bangers!). We’re in Central Park for today’s race and I’m deep into the final lap. Two miles to go, I’m a bit broken physically and mentally, a sweaty mess (whoever penned the phrase that ladies “glow” clearly hadn’t attempted a Zwift race), and clinging to the front group like that last bit of a wrapper on your candy … But all I need to do is pass the horse and carriage vendors and I’m on the home straight. Round that corner and the end is at the top of Cat’s Paw Hill. I can almost see it!

“So….Jen is four times as old as Jack and is also 27 years older than him. How old is Jen?”

A child has appeared by my side, clutching his math book, completely unfazed that he’s standing in a pool of sweat and looking at me, wide-eyed, for an answer. I remove a headphone. If I’m going to be honest here, I wouldn’t have been able to answer the question on the best of days (6th-grade math is a lot harder than it was back in the day!) let alone when I’m 50 minutes into a race and close to revisiting my lunch.

“My brain’s not really working just now, give me five-ish minutes,” I splutter, trying to keep one eye on the screen and frantically switching gears as the final hill appears.

“Oh, there’s a lot of people going past you isn’t there?! They’re fast!” the little person with no filter remarks as he pokes his head in front of the screen. I stomp on the pedals, frantically trying to make up a few places in the closing seconds. Completely unaware of the distraction he has just caused, he skips out of the room, leaving a few damp footprints in his wake.

Some riders experience technical issues during eRacing, others mechanical. As I crossed the line, scraping 16th place, I jotted my issue down as sideline intimidation and took a mental note to sign up for races that don’t clash with homework time. On the plus side, thanks to a quick Google search, I managed to keep face as a mom that knows “loads of stuff” and we finished the math homework during my cool down. Oh, and in case you’re wondering, Jen is 36!

In all honesty, though, eRacing and training are an absolute godsend as a parent. The community just seems to “get it.” I’ve ridden alongside moms and their kids taking part in the same rides, cycling side by side in their pain caves (Zwift has child accounts, free for under-16 when you are a member). I know of a mom who used the white noise of her trainer to soothe her newborn when he became restless. If you have to leave a ride because you used the green plate for a snack and your kid’s now kicking off because he wanted the red one, the chat will be flooded with votes of sympathy and other moms regaling each other with their own stories of when their wee one did something similar. Running on coffee fumes and 20 minutes sleep after being up with your little darling who is now sleeping like a log and you’ve got a race in half an hour? There will be someone in the start pen who has got your back and will offer their words of support and a virtual hug.

For two years, up until March, I fit my training and eRacing schedule around work and school hours. A jaunt round Watopia or a mistimed early afternoon Innsbruckring race before pickup after school usually resulted in me picking the little man up from the school office looking (and smelling) like a drowned rat. Post lockdown/quarantine/pandemic, bar the occasional situation like the aforementioned ‘How old is Jen?’ conundrum, being able to simply pop between rooms to play the varying roles of teacher, mom, and athlete has been something that I will be eternally grateful for and it’s definitely kept me sane. Plus, having a devoted cheerleader watching your race from the next room and shouting through words of encouragement (and sometimes some brutal honesty) will never get old!

Motherhood is hard. There are days where my bike gets used as a drying rack and there are others when mustering the energy to get a zone 1 ride in is impossible. But when you become a mom you have this little person who looks up to you, who holds on to your every word, and learns from your actions from such a young age.

Being able to train and eRace – sometimes inches from where my son is sitting – gives me confidence that I can inspire him for years to come. For him to witness the fact that I’ve been part of the trailblazing movement towards parity in women’s cycling is incredible, and hopefully, when I’m watching the 2040 Olympics with my grandkids and the eRacers take to the stage he can regale the story of that one time he burst in with a math problem during a race while I’ll sit there and simply beam with pride.

Editor’s note: this post originally ran on theproscloset.com and is reprinted here by permission 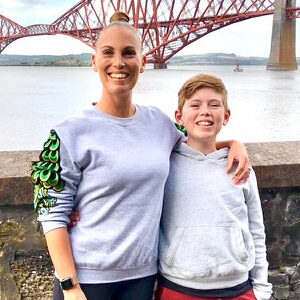 Caroline is a Personal Trainer and Post Natal Coach, mum to a 10-year-old (going on 20), and racer for the Saris + The Pros Closet team. She’s a Scottish girl but has lived in the Middle East, Oregon, and currently resides in Jersey City with her husband, son, and their quirky Golden Retriever, Rey.

Great narrative Caroline! I loved it!

Great read! I can personally attest to the strong coaching I received from my four-year-old yelling, “pass them!” as she watched me race. Mind you, her head was covering the screen so I could only tell what was happening by watching my mini-map. It was pretty phenomenal. ﻿😀﻿

Awesome article! Thank you for bringing light into the multidimensional lives of many women on Zwift: women who are mothers, workers/professionals, educators/tutors during this pandemic and still manage to make time to ride, train and race!!

Great story! As a mom to almost 10 year old triplets (who also sometimes Zwift) I can totally relate. The best was during remote school gym (tour de Boudicca TT) they announced I was doing a bike race and the gym teacher was very confused 😂

I lost 8 points (~3%) on an ftp test due to a similar disruption. Glad to know I’m not the only one.