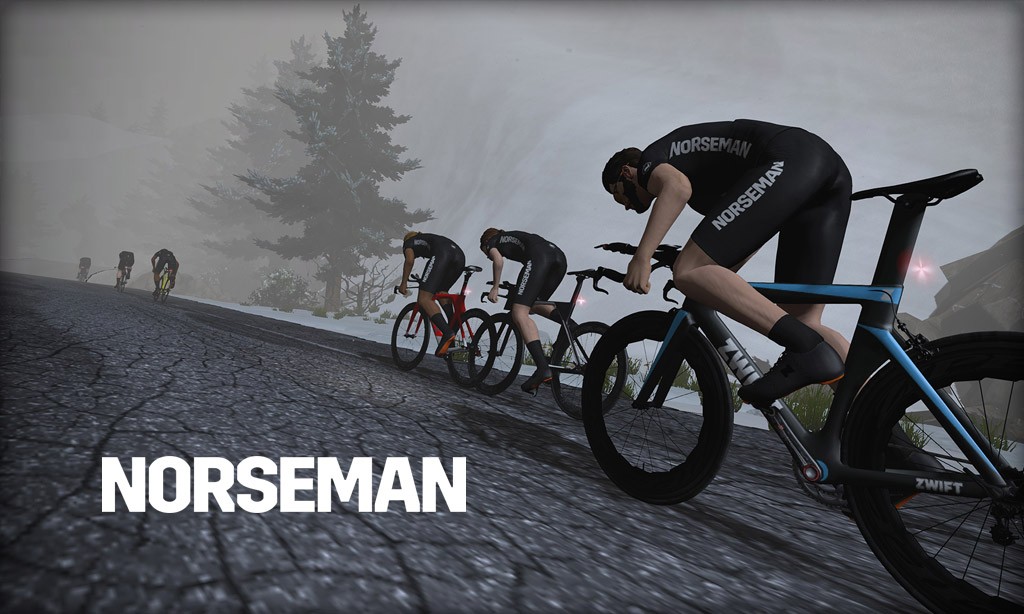 Zwift has just announced this year’s Norseman series – a 6-week ride+run training series culminating with the weeklong Norseman Festival of Climbing. With COVID-19 canceling the IRL Norseman race, this will be the only Norseman experience for 2020!

From June 15th through July 26th, Zwift is hosting the Norseman Training series which consists of group ride and run workouts, events, and races. Each of these activities will hit key timezones worldwide, with four different sessions per day.

The bike and run workouts were developed in collaboration with Norseman and feature specific messaging and coaching around different parts of the Norseman course. Notable Norseman finishers and ambassadors will also lead some group rides and runs!

See training series events and sign up at Zwift.com >

The training series culminates in The Norseman Festival of Climbing, a week-long celebration of hill climbs around Watopia with a chance to win two entries to Norseman 2021!

The route schedule will be released soon, but each route will build upon the elevation of the previous day.

Hi Eric, do you know what the Aug 1st and 2nd distances will be? I’m guessing they will be similar to last year, Uber Pretzel Bike ride Saturday, 20k Run Sunday. Side note: I calculated, last years Uber Pretzel ride had a DNF rate of just under 80%.

Zwift hasn’t released this info yet.

Hey, isn’t this Zwift “Insider”? You’re supposed to get inside information and the early scoop! ﻿😉﻿

Ah, but you see Bobby… the info above is already more than Zwift has told anyone else! What you’re wanting is super duper inside. For that you’ll need to visit zwiftreallyinsider.com

Zwift hasn’t released this info yet.

To participate you will have to both ride AND run ?

I’ve just asked ZHQ for a little clarity on how it will work. I’ll update the post and reply here when I hear from them.

But I could be wrong!

Here’s what HQ told me (added above):

That was way more clear than their later announcements. But unless they changed their mind, doing just the bike ride should get you the bike kit.

I updated the post above with what they just told me:

Will
Reply to  Eric Schlange

If they’ve changed the entry requirements, I hope they send out an email. Last year you had to complete both to be entered into draw, which makes more sense.

I think they only got about 30 entries though, so I guess that’s why they’re cutting the running requirement. Either way, I hope they send out an email for the benefit of the few people who don’t read Zwift Insider 😉

Yeah, just confirmed with HQ that the run is not required to get the entry.

Last year, did you just have to complete the event? 80% seems like a high DNF unless there was also a time cut-off (must finish in less than 6 hours) OR a high rate of entries of people who either did not know the distance they were riding or never planned to finish. I’m assuming that you don’t have to do all the events leading up to the August 1st and 2nd events…they are just designed to get you ready for the MAIN EVENT! Monica? are you ready to inspire us?

Oh, Norseman is nuts for sure.

Is the jersey the same of the previous norseman? i wear it proudly cause i ve done the alpe a lot of times to unlock it… hope for somethin different but pics seem the same of 2019