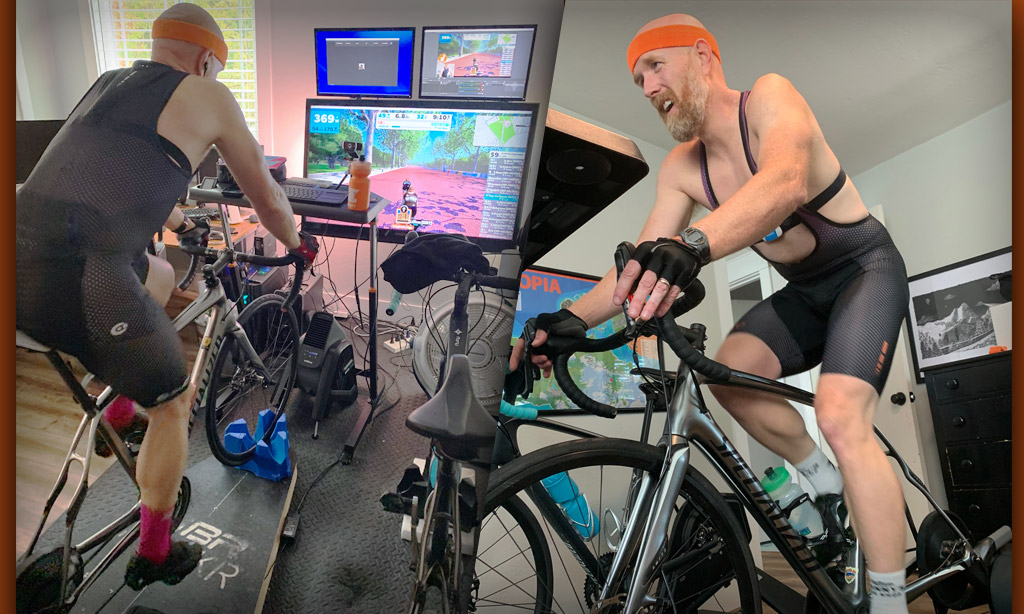 UK-based cycle racewear brand Nopinz announced their SubZero Turbo range back on October 1st. I’ve had both the bibshort and suit versions of their kit since a few weeks prior to that rollout, and I’ve been putting the kit through its paces in Zwift races each week. Here’s my review…

While some may scoff at the thought of “indoor-specific cycling kit”, there is no denying that indoor riding does put demands on your kit which aren’t seen outdoors. Namely, sweat is a much bigger issue inside due to reduced airflow, and saddle discomfort is common due to reduced bike movement on a static trainer setup.

Clothing companies have recognized these demands, beginning with Castelli’s Insider line then followed by Rapha and Le Col + Wahoo (read my review of these three kits). So Nopinz isn’t the first to come out with indoor-specific kit, but they are one of only a few offering it, and their line has something the others don’t: swappable frozen gel packs to help you stay cool.

The key feature of the Subzero range is the inclusion of sewn-in pockets to hold frozen gel packs. But after spending some time chatting with Nopinz CEO and founder Blake Pond (a keen Zwift racer himself), it’s clear he put much more thought into this kit than just the freezer pocket idea! Indeed, the kit without the pockets is probably the best indoor kit I’ve worn, combining the strengths of the competition’s indoor kits while avoiding the weaknesses.

Here are some of the additional indoor-specific features:

This is the question everyone is asking, of course. Do the freezer packs work? How do they feel?

I racked my brain trying to come up with some sort of test to show the efficacy of the freezer packs – but without a real lab that’s pretty hard to do. So all I have to go on is my own anecdotal evidence, gathered from over 20 races in the Subzero bibshorts or suit.

Here’s what I can say: I keep picking the Subzero bibshorts from my closet when it’s time to race. I definitely feel cooler when I have a fresh pack in, and when I swap to a new set in the final 15-20 minutes of a race, it feels great.

It’s worth mentioning that I’m a guy who gets hot easily, and I sweat quite a bit. When I race, I typically have my Wahoo Headwind going full-bore, and sometimes I’ll have the air conditioning on as well. Some riders don’t seem to need the same level of cooling that I do – but if you’re like me, I think you’ll appreciate the added coolness of the Subzero kit.

A few notes on kit fit, since that is always a question:

One reason I’ve delayed this review for several weeks is so I could wear the kits quite a bit and put them through a lot of wash cycles.

I always wash my bib shorts on the washer’s “delicate” setting, then hang them to air dry. The Nopinz kit has held up well so far, with no issues to report. It seems to be a bit sturdier than Castelli’s Insider shorts, which I love but which I’ve popped the seams on while pulling them on or off.

At £109.99, the bibshorts are quite affordable. They’re the same price as Castelli’s Insider bibshort, and much cheaper than Le Col’s £150 price point. Keep in mind, though, that adding the freezer packs (and cool bag) to your bibshorts will increase the price by £30.

The Subzero kit from Nopinz is the most well thought-out indoor kit I’ve used to date, and that attention to detail clearly shines through in the bibshorts and suit. Blake is a strong A racer on Zwift, and Nopinz sponsors some of the top community racing in Zwift. This intimate involvement with our rapidly-evolving discipline shows in their products.

I have no reservations highly recommending the Subzero line to any Zwifter looking to stay a bit cooler during hard rides. I would recommend the bibshorts first, although the full suit is a nice option if you’re looking for a bit more modesty. The jersey isn’t really necessary unless you like to wear jerseys indoors and/or you’re live streaming and want to look pro but stay cool. The towel is just a cool inspirational add-on, and the sweatbands may be great for some folks, although I haven’t found them particularly useful.

Thanks for the honest review Eric! I’ve been very interested in this kit. Do you know how much shipping to the USA is? Like you I run hot and sweat like a wildebeest. Hoping Santa brings me the NoPinz subzero bib and extra cooling packs! p.s. Was a winner picked for write a review and win a free indoor trainer?

I think I paid roughly $30 shipping.

But the prices shown in the web shop include 20% VAT, which is the standard way to do it in Europe. That tax is removed if products are shipped to non-EU countries.

Why are all indoor specific shorts less padded? I find I need more padding. Just like you say in your article but then say the pad is thinner?? Sometimes a longer ride indoors is difficult due to this lack of support

I’m not sure I’d say “all indoor shorts are less padded.” And chamois fit is a very personal thing of course. That said, I’ve found thicker pads just soak up more sweat and put pressure in places I don’t want it.

But I’m also on a rocker plate, so I get more movement than most.

Thanks for the review Eric! Do you feel like you sweat less wearing the Sub-Zero kit? Even anecdotally

I’d say I feel drier. Is that because of less sweat (because I’m cooler), or because the kit wicks well and lets my fan evaporate the sweat? Not sure! But I like it.

Like Eric, I *really* love using these for a race, almost using the cooling packs like little power-ups. Cooling the upper & lower back is really helpful.
However… also wash these on delicate and air-dry. Despite that, I have 4 seams that are starting to come undone after only 6 weeks, which I can’t say I’m terribly happy about.

Hey Mike: I would contact Nopinz. I asked them early in my testing about what happens if something happens like you’re experiencing – they said their standard practice is to have you mail the kit back, and they’ll send you a new one.

They seem to really stand behind their product, which I appreciate. No product is perfect, but if there are flaws and the company is willing to make it right, that keeps me as a happy customer.