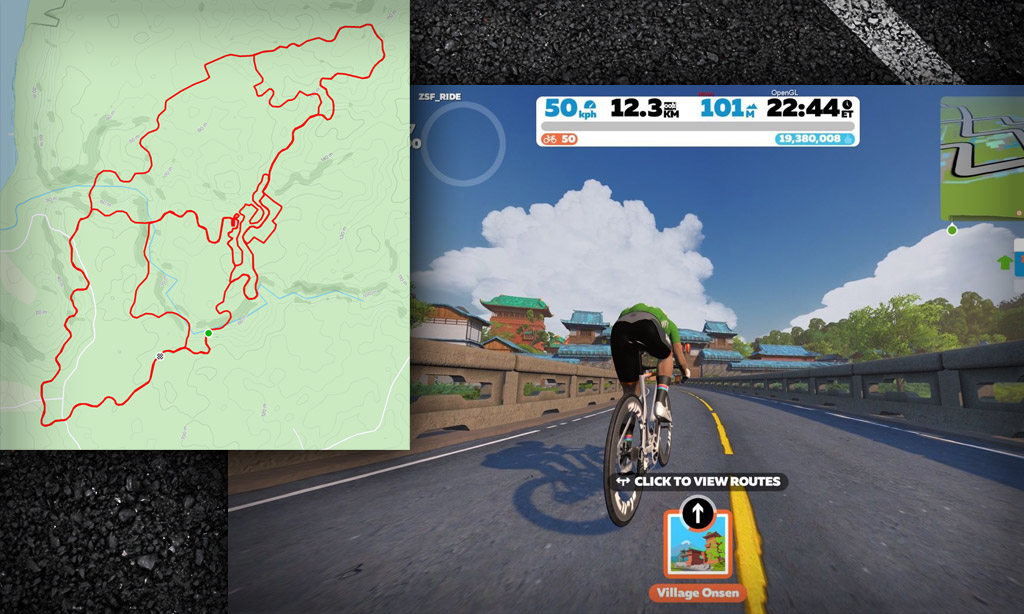 Zwifters all over the world have been keeping a keen eye on Zwift CEO Eric Min’s Strava account, hoping he would post a ride in the new world Zwift has been teasing since last weekend. And today, he did just that!

Eric traditionally posts a “teaser” Strava ride a day or two before new maps launch, so we’re pretty confident that this “Ancient Land” will be available for Zwifters to experience very soon.

Learning from His Ride

Fortunately, spirited Zwift hackers have already discovered what we think is the entire new map. Here is that map image (from the Companion app on Android), with Eric’s Strava ride overlaid on top. You can see his ride covered most of the roads on the new map.

The route profile is fairly flat, with an elevation difference of around 60 meters between the flatlands to the Northwest and a pitchier section in what appears to be a city with roads twisting through it near the center of the map.

Of course, since Eric didn’t ride some of the roads to the south, we can’t say what happens elevation-wise in this area.

The total length of the outer loop Eric rode is approximately 15km.

Eric posted one image from his ride, heading into the square-walled city (called “Village Onsen”) on the eastern side of the map:

An “Onsen” is a hot springs, so presumably this village has hot springs nearby. It also looks like it would make a killer crit course!

As most Zwifters know, GPS data for Zwift’s imaginary lands is mapped onto Pacific Islands so they can play nicely with Strava data. The new Yumezi map is located on “Lata”, the provincial capital of Temotu Province, Solomon Islands (553 inhabitants as of 2007).

Watopia is located on the much smaller Vanikoro Island (also part of the Temotu Province), approximately 90 miles southeast of Lata.

If the size of the real-world islands is any indication, Zwift has big plans for Makuri Islands!

Zwift has managed the tease campaign for this launch in expert fashion, sending out small puzzle pieces across all their channels since last Saturday. There’s now a placeholder page live at zwift.com/yumezi, with a very short video of the new map. And it looks beautiful.

The new map is named “Yumezi”, and it is located in “Makuri Islands”. If this seems confusing, just think of it like Zwift launching Titans Grove in Watopia – a smaller map release located in a much larger world.

Yumezi appears to be part 1 in a series of releases for the Makuri Islands, which will be a sort of “hub world” that gets built out similarly to Watopia.

What do you think? We’re excited to explore some new roads here at the Zwift Insider Lab. Getting prepped to put together some new route profiles!

Maybe thats could be a nice new world! Really looking forward for some new stuff!

Looks nice, but I’m a little worried that his ride was only 20 miles and it covered most of the tarmac sections on that map, and some bits twice. Kind of feels a little small for a proper “hub world” right now, but who knows, it may get bigger over time. (Then again I’ve thought that about France too with all that space in the middle.)

Interested to see when it’s released. Can’t imagine it’s tomorrow with TTT, so thinking it may be Friday. Thought zwift had moved away from Friday releases though. Could be today but thinking it’s more likely Friday.

You’re missing the $1m question… how many badges will it entail!?!

I hope you’re right on this world getting extended over time. I think having 3 large worlds would be the way to go. They can easily connect France, London, Innsbruck and Bologna into one larger Europia land, also to be extended on the future. Watopia right now feels like a parade at times, and adding more guest worlds into the rotation would somewhat annoy me too TBH.

And Harrogate of course.. my favourite route for a ‘natural’ interval ride.

It’s called riding your bike to us Yorkshire natives!

Can we after the Brexit?

They may have left the EU but I don’t see them leaving Europe any time soon!

Come back in 75 million years, UK with be connected to mainland europe

Eric, Should I wait for all the Zwift series releases before buying a Makuri Islands map from ZwiftInsider? Never mind, I’ll probably end up buying every expansion version and collect the whole set for my Zwift cave! 😉

Update just dropped on Windows. This is world 9 for those pref.xml editors

According to the release notes, it will be available May 20 at 4am UTC (May 19 9pm PDT)

8 new routes as well this is exciting

tomorrow it will be 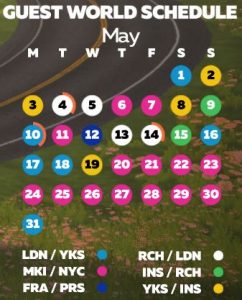 Awesome… No need to mess around with prefs.xml then 👍 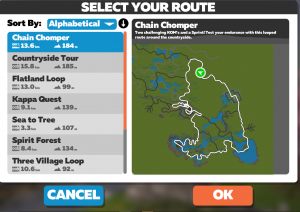 how about fixing the Bluetooth dropouts? you know the same issue that’s been here for years? but hey new roads for it to dropout on

I don’t think Zwift has much to do with the Bluethooth protocol, it is a local HW thing, Zwift is just a user on this.

Just had a look around – looks like there are 12 routes, the longest at 15.2 km. shortest at 3.3 km. I would post pics here but cant figure out how, so https://docs.google.com/document/d/1r7NtKLSE_asfkDvX2W09BOrZ8RfpGp4gOHbAuqTwPqc/edit
let me know if u cant open it
sorry that theres only 3

Maybe we will finally get a real mtb course! That way steering can be used in meaningful way! Or at least have some way to add in a fun new element to indoor cycling.

i believe there is an mtb part, but no steering i think

They really need to consider how steering could make MTB race courses special. i would imagine multiple lanes, some faster or slower with different surfaces like mud etc. Then some singletrack where you have very limited passing opportunities, or where getting the holeshot is important. Different bikes could have advantages, like hardtails on the climbing, FS on descents or sections with increased rolling resistance

Will Mt Fuji be an option in MKI world? More flats are nice (new world looks a lot like Jungle Loop to me), but Mt Fuji would be special.

my guess is that mt. fuji will be an expansion released closer to the olympics

So here is just a thought, I was putting together the key events for the weekend for my Zwift Insider article, like I done for the last few weeks and I noticed that this weekend, there are not any really big branded events. For example last weekend we had Ride Like King from Giant. I would not be surprised if it got released this weekend, but the only thing that would work against that idea is the release that has been deployed to fix the bugs…. unless the map is in that download and then they just have to activate… Read more »

👍 Great – clearly I am 2 seconds too late, just like my Zwift sprints. I am on iOS and can’t see it, but the update is not in the App Store to download. Great to have this new world, Looking forward to losing more races in new and interesting ways, along with collecting those new badges 😀

Two sprint segments, but he didn’t get a route jersey. Looks like the missed roads will liking contain the KOM.

i think he was just manually turning. the main route jersey is likely the perimeter of the map

Pretty frustrating that we’re still stuck with disconnected worlds, I was hoping we could have evolved into one giant connected world by now to make some really interesting routes

The worlds have to map to real GPS coordinates to play nice with Strava. That leads to its own set of oddities, but they will never be able to connect worlds.

I sure hope so!

Unfortunately after updating Apple TV app crashes when trying to open. Nothing will fix it. Hope Zwift is quick about it

Just did a time and date change on my PC that allowed me to access Maruki Isand (I live in Aus). Currently riding on it right now and it is visually stunning! The section that goes through a Japanese style palace is awesome with lights and lanterns everywhere. The gravel climb up the Temple is a lot of fun. You can also see what looks like Mt. Fuji in the distance, so I would expect we will be getting a very big climb in a future release! For me France was a disappointment. Felt boring and flat, except for Ven-top… Read more »

Eric – I realise this is a ‘first world’ low grade problem but Zwifthub is displaying empty boxes for the new routes. See attached screen-grab (Mac OSX 10.14.6; Google Chrome Version 71.0.3578.98). – A big thank you for taking on Zwifthub!! 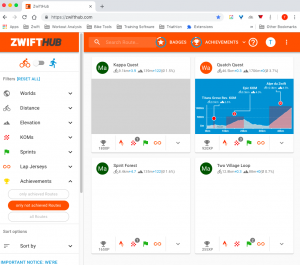