Making (and chasing) the break (Skillz and Drillz) 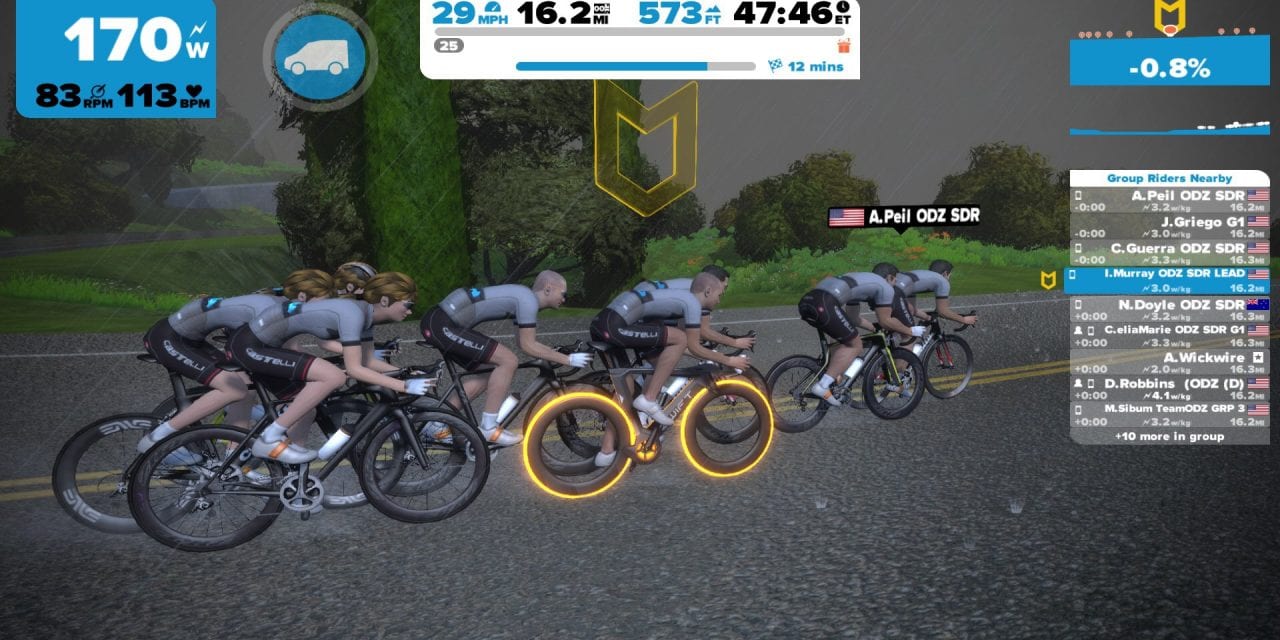 Castelli SkillZ and DrillZ Ride, 12 April – In the world of professional cycling, the breakaway is often the realm of those doomed to suffer for an extended period of time off the front of the group, only to have their hearts broken as the eventual winners catch and blow by them. Sometimes, this occurs within sight of the finish line, and the disappointment and anguish is apparent.

In Zwift racing and even in the non-pro ranks, the breakaway often rules the day. Today, we covered making the break and how to chase it down. Like usual, the video of today’s class can be found on Zwift Live by ODZ on Facebook or you can watch it below:

As usual, we got started with our brief warm-up where we practiced maintaining our position and moving around the peloton. Then, we got to the meat of the day. This week, we again divided into three groups: group 1 (G1) last names A-H, group 2 (G2) last names I-Q, and group 3 (G3) last names R-Z. We would use these three groups to form our breakaway group, our passenger group, and our chaser group. 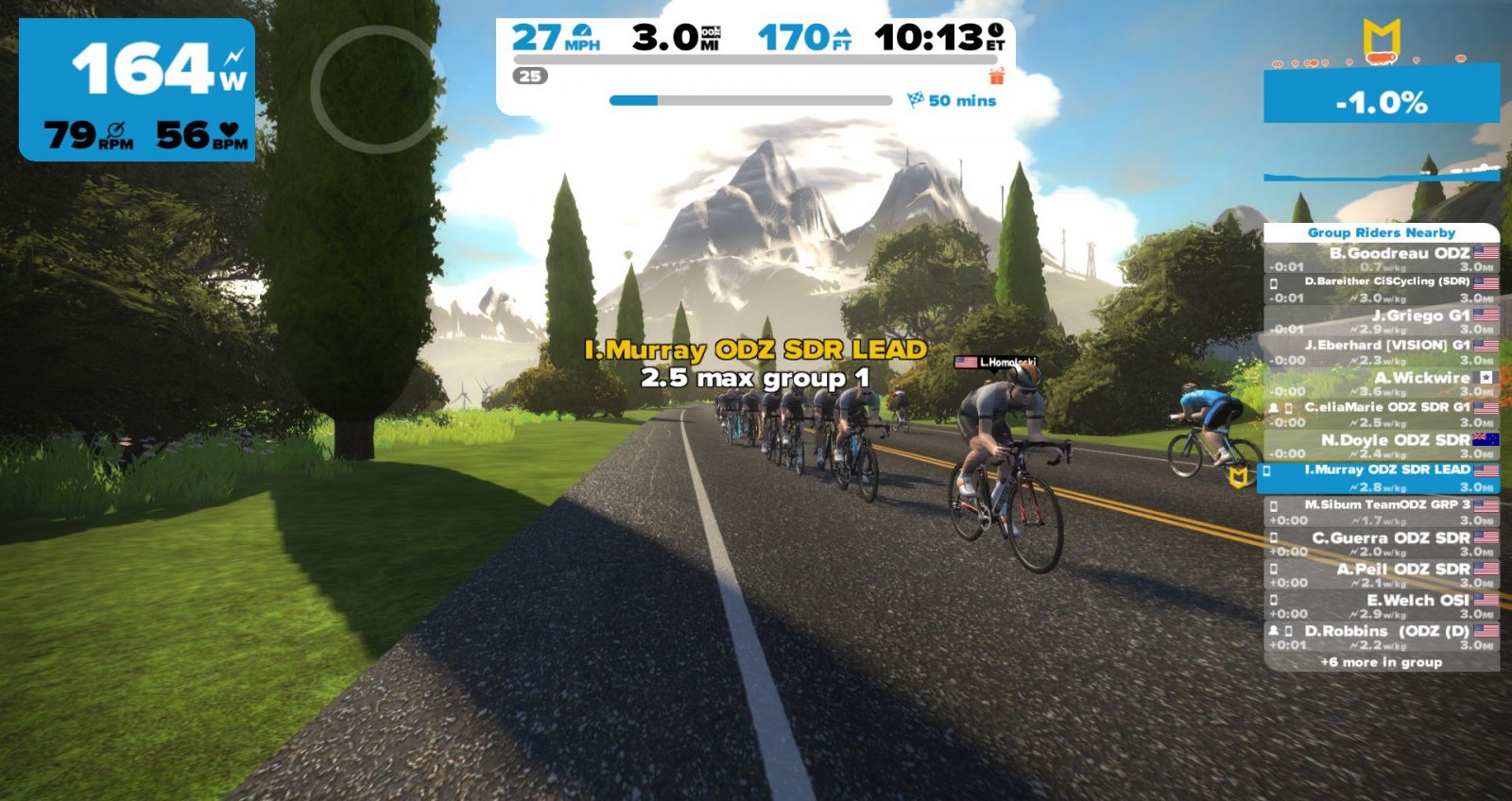 The How and Why of Breakaways

Before we get started into the drillz, let’s discuss how breakaways form and what makes them successful. Breakaways in the professional peloton happen for a number of reasons. A small team may want to get some camera time for sponsors, or a team wants to position someone up the road to use later in the day. In some races, the winning move starts in a late breakaway like we saw in Paris-Roubaix. More often than not, the early break is brought back before a winning move is made or a bunch sprint occurs.

In Zwift racing and for IRL racing for us mere mortals, getting in the break can be the difference of competing for the win or just participating in a hard group ride. When the break goes, you have to make that split decision of whether you jump on the train or not. Once the move happens, the initial push will be hard, but it will settle. How long it takes to settle will depend on the size of the group and the ratio of drivers and passengers. The more drivers in the group, the more likely it is that the pace will stay high. Chasing the break down is merely a math problem. Are there more strong riders in the break than the chase pack, and are they willing to work? Whichever group has more firepower that is willing to work will likely take the day. Normally, numbers lie with the group, so it often falls to strength of riders. 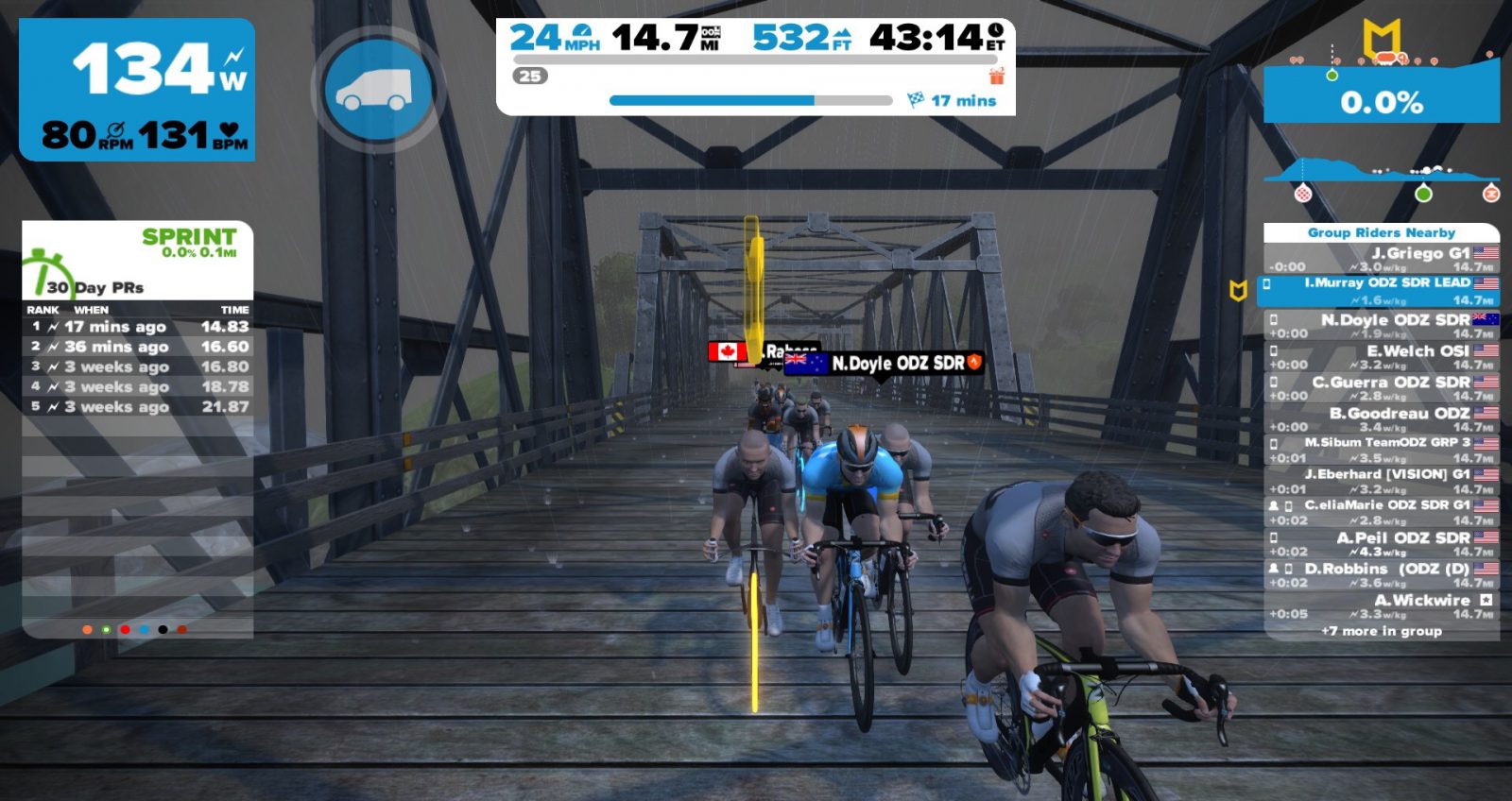 For our purpose, we practiced chasing the breakaway and disrupting the chase. The first drill was simple. G1 was told to go up the road to get small gap at a determined pace. After about a minute, G2 got on the gas to chase down the break. The key for G2, and G1 after swapping roles, was to work together. By keeping the bunch tight and rotating through, the chasers were able to pull the break back in short order, and that is the key. Short of having a monster on the front to do all of the work, you have to use the others in the group to share the workload. At the same time, you have to determine how much work to contribute to the chase while preserving enough energy to make the winning move later in the day. Be careful when making this decision. If you don’t catch the break, it doesn’t matter how fresh your legs are when you arrive at the finish because you will be sprinting for the lesser points. 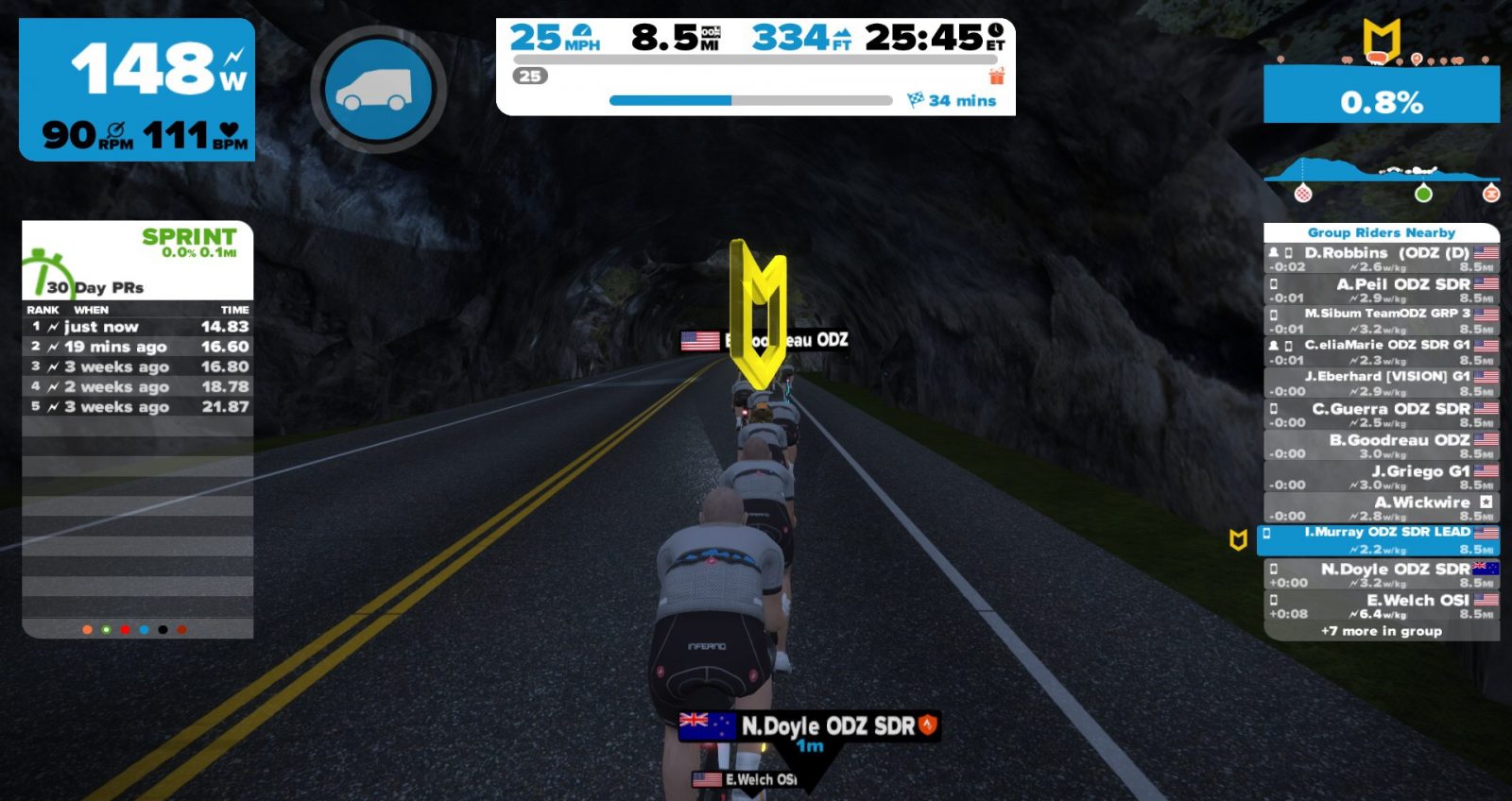 What happens when your teammate is up the road in the break, and you don’t want the chase to succeed? Well, that’s when you have to practice your disruption skillz. For the second drill of the day, we added the element of someone interrupting the momentum of the chase pack. How is this done? Well, it’s simple. Be annoying. I don’t mean that you should ride up real close to other riders and say, “I’m not touching you” in a silly voice. I mean, go to the front and ease the pace. Allow gaps to open up, sure and slow, messing with the group’s ability to get a rhythm. Any of these techniques work.

During the drill, a member of the breakaway group remained with the chase group and joined me in the fun. Using the same gaps as during the previous drill, we showed that even mild disruption techniques made the chase longer and more work than the previous iteration. Now, there is a caveat with disruptions: it’s a lot easier to do in IRL racing, as riders can just ride through you on Zwift. Thus, it is harder to slow the group, but surging and slowing definitely keeps the group from working together effectively. 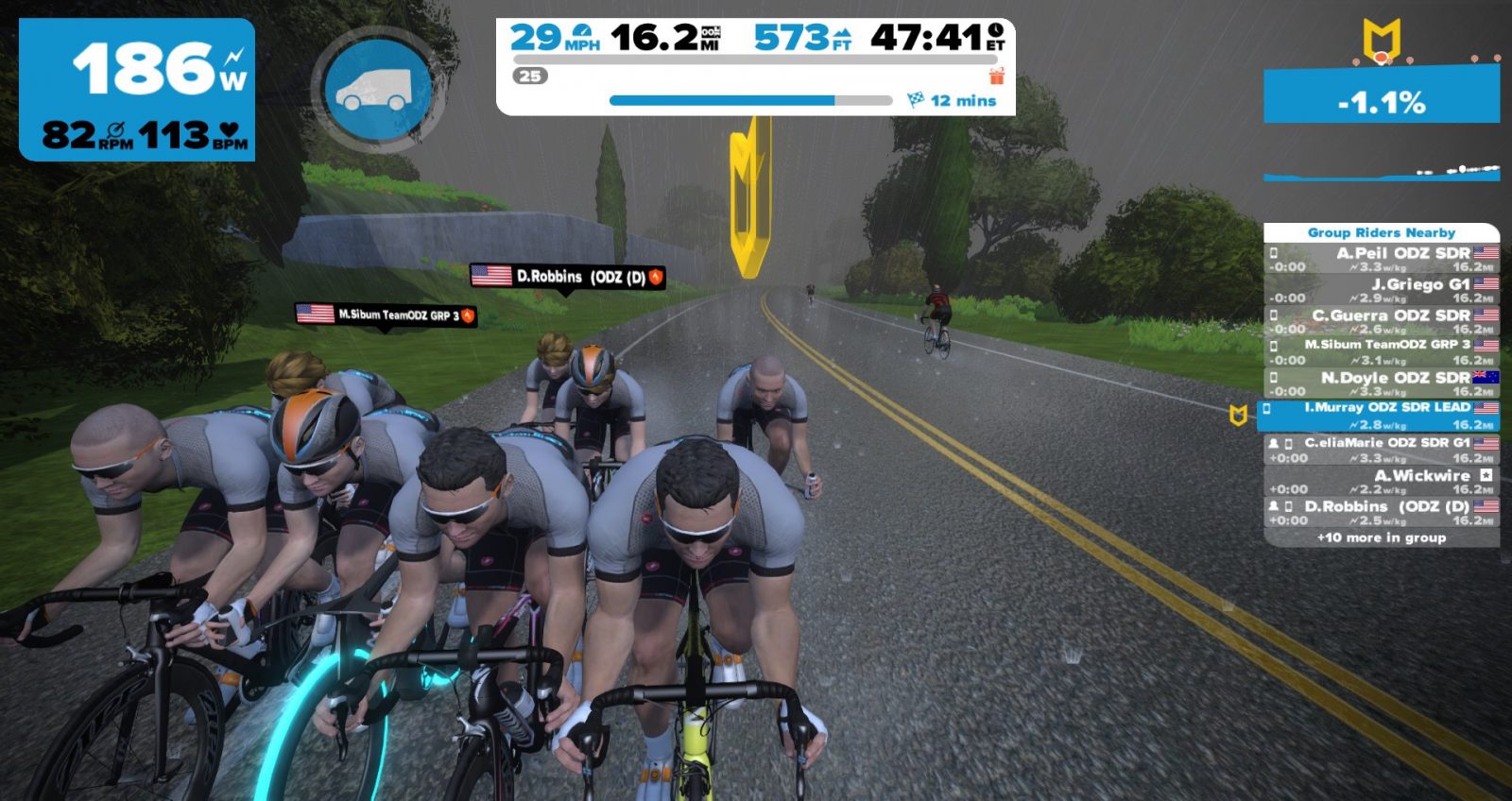 Being in the break is a great way to give yourself a chance to win a race from a reduced field. By working with your breakaway mates, you give yourself a chance to stay away… unless of course, you just want television time. Next time you see a move go, try to make the jump and do the work you can. If you missed the move, organize the chasers. You will see how much organization matters. That’s it for now. Next class we will cover sprinting. Until then, Ride On! 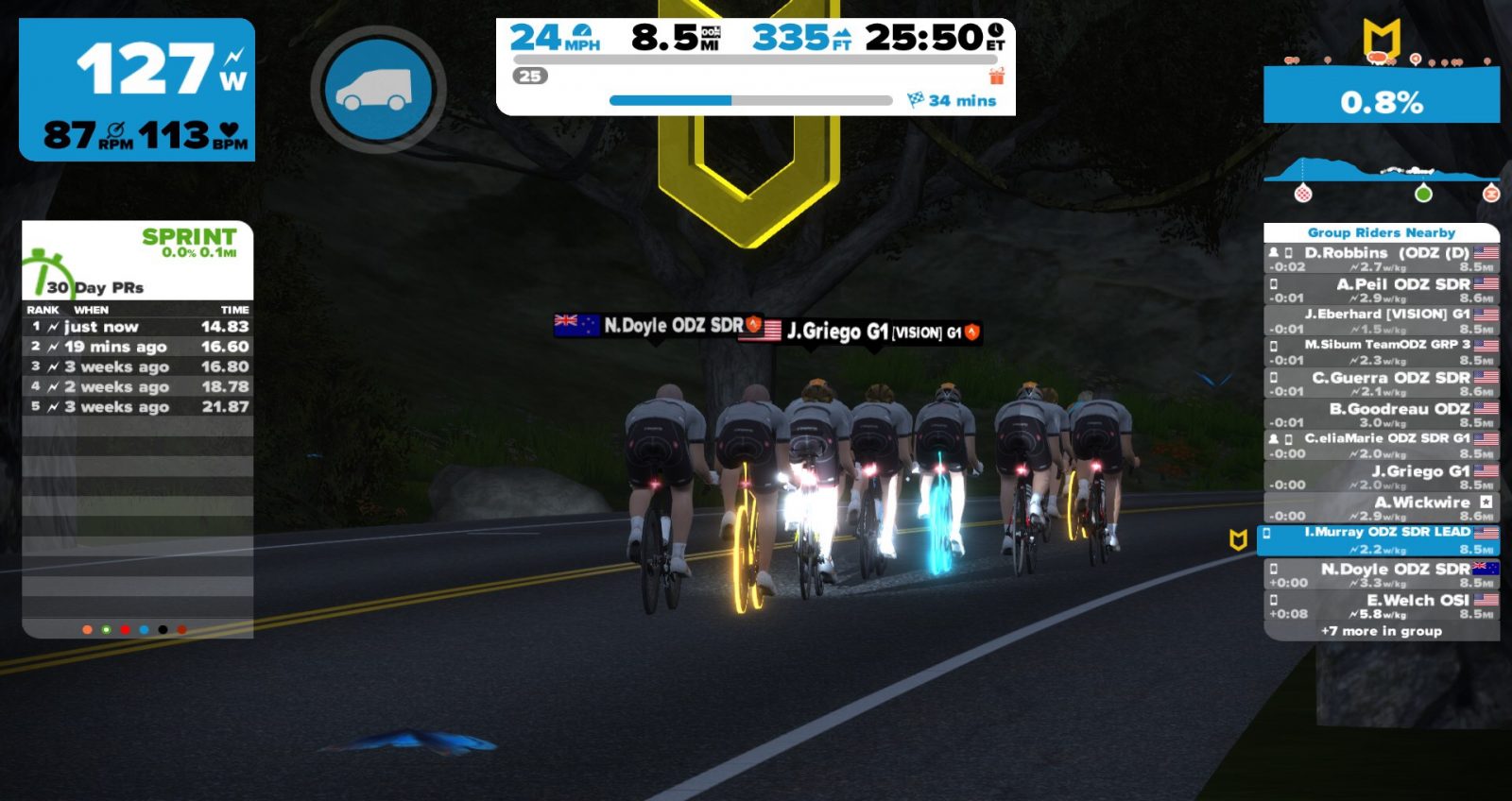