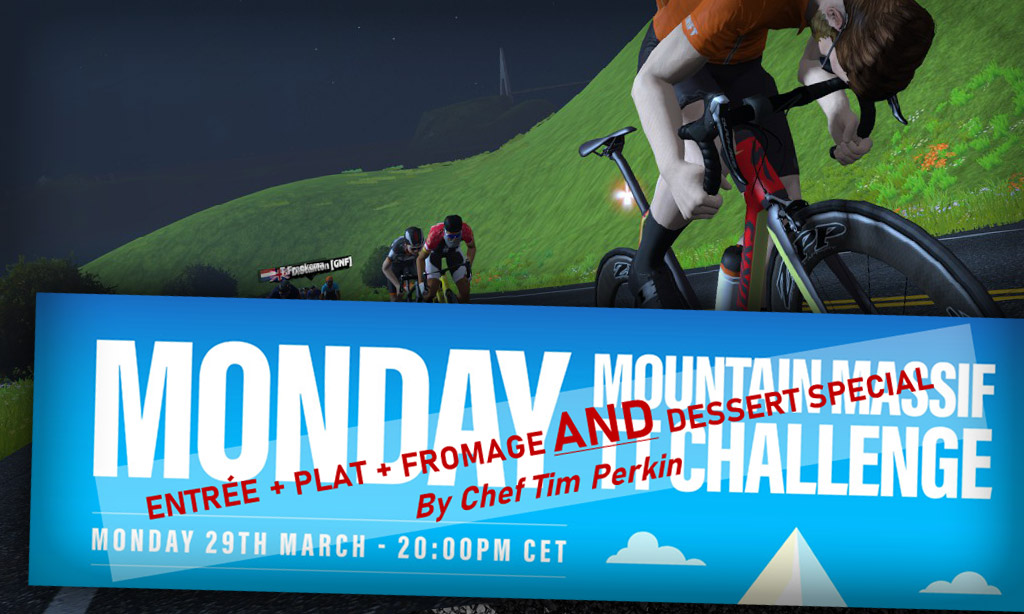 In France, many degustation menus include a Fromage (Cheese) or Dessert (Dessert) option. Meaning the price of the menu includes cheese OR dessert, and you have to choose between one or the other. You can also, for an additional fee, go for the Fromage AND Dessert. Your choice mainly depends on your appetite for the day. Freedom of choice.

And then you have the “Chef Tim Perkin Special Monday’s Massif Mountain TT Degustation Menu”.  The particularity of Chef Tim Perkin is that he makes Fromage AND Dessert mandatory. You get Time Trial AND Mountain by default. No way out. Want it or not. If you are toast, done, full, you can’t take it anymore, too late… you get both and that’s it.

The invite was everything but attractive. It seemed like Tim wanted to have dinner by himself, positioning the event as close as possible to what the definition of a torture session is:

“What do you get if you cross a mountain race and a time trial?  An absolutely intense, but highly unique event that will test the ability of any rider.

This is the chance to push yourself beyond your perceived limits and do something that you haven’t done before.”

Who would be lunatic enough to go for this? Well, close to 500 Zwifters enrolled, including some legends like Jonathan Edwards (Triple Jump World Record Holder), all proudly and publicly acknowledging their insanity by RSVPing.

Chef Tim prepared a shortened version of the Mountain 8 route for our consumption: close to 6km flat portion Fromage, followed by a 6km Epic KOM Reverse Dessert, with an Antenna hot fudge topping.

Dinner was due at exactly 8PM Central European Time.

The original intention was, through the event, to create an allegory to the 2020 Tour de France 20th stage, where Tadej Pogačar (without a power meter by the way) destroyed the Climbing TT one day before the end of the race. He distanced Primož Roglič by 1 minute and 56 seconds and won the Tour de France against all odds in one of the most outstanding overturns in cycling history. A typical David against Goliath story.

In line in the pen, galvanized by this incredibly inspirational story, we were all Rocky Balboa underdogs ready to ignite the world with our wattage output. In reality my main concern was to check the bike choice of my enemies beloved fellow Zwifter colleagues. With such an eclectic route profile, the bike choice was not that obvious, and I eventually opted to go as light as possible: Tarmac Pro and Meilenstein Lightweight.

Music choice is utterly important for me in these circumstances. The last minutes of the wait were accompanied today by the classic but never aging “Final Countdown” by Europe. IT’S THE FINAL COUNTDOOOOOOWN!!!! NA-NA-NA-NA-NAAAAAAAAAAAA, NA-NA-NA-NA-NAAAA!! For sure I was singing way too loud and out of tune because a shoe hit my back in objection (or maybe it was only a survival reflex from my wife).

3…..2……1….. GO!!!! I unleash close to 700w for 15 seconds, then sit and maintain 450w for another 30 seconds to finally stabilize around 320w, which is 4.11 w/kg for me, my cruise pace. (Yes, point eleven. Not the same as point ten or point twelve. If you believe it is the same you should return your Zwifter diploma to ZADA and sell your smart trainer to someone who actually cares. You don’t deserve to be part of our community. 😁)

Remember that Rocky Balboa spirit I referred to earlier? It lasted exactly 7 kilometers. Three km into the Epic KOM reverse I started my mutation. I downgraded from the Hulk to James Bond in the third km of the ascent, from James Bond to Gru the Villain in the fourth, and finished somewhere in between an anemic version of SpongeBob and an undertrained variant of Steve Urkel by the time we were finishing the KOM.

As many riders were overtaking me, not even noticing me, I turned on the first gear of my excuse-maker machine. Since I knew I would need to stick to one of those self-made excuses until late in the night, and that I was certainly going to be writing about the event, it needed to be rock solid. I was tempted by two equally laughable alternatives. I let you choose for me the one you prefer:

If anyone is interested, just send me a private message. I can generate tons of them spontaneously, customizing the excuses to your individual skills, physical attributes, local climate, gear, apparel, isotonic drink of choice, astrological sign, and past traumatic events. I am still in Beta mode, but in a month or two I will ask for royalties if you use them.

By the time we turned right to the antenna,  the crowd looked like a long procession of Spongebobs. Even the ones pretending to still be Hulks were debunked by their avatar’s cadence in the low 60s.

A quick look at the top of the climb and now it’s my complaining and swearing machine turning on. We, French, are all provided with a very powerful one within our DNA:

“I can’t believe I have put myself in this situation again. How can I be so stupid, what’s the point, who even cares? Plus this thing is not even real… I am by myself in my pain cave like an idiot, all this because I could not resist Tim calling on me… freaking testosterone. I took it as a “I bet you don’t have the guts to enroll in the climbing TT” and like a jerk I fell into it.  And now my legs burn and I am sweating like a steam-cooked Chinese dumpling for what? Nothing!! Literally nothing!!”

I bet it sounds familiar and resonates with most of the people experiencing the 17% gradient on the last segment of the race.

Once at the top of the mountain, I would be lying if I said that the verb “enjoying” was the first coming to my mind to describe how I felt about the Fromage AND Dessert meal.

I felt I needed two or three antacid tablets to digest it all.

Now, seriously, the service was excellent and deserved a 35% tip for sure. We had tons of fun before and after the event through the Discord channel.

In any case the event was a great great idea. It felt like an immense meet-up combined with a huge challenge and at the same time the celebration of being together.

Cherry on the cake from a personal perspective: today I improved my FTP 11 watts and was upgraded to Category A by ZP.

@Chef Tim. This was presented as a “unique” one, but I can’t wait to receive an invite for the next “unique” Fromage AND Dessert event.

Editor’s note: thanks to the success of the first Monday’s Mountain Massif TT event, it is now a weekly event on the Zwift calendar, held at 19:00 CET. 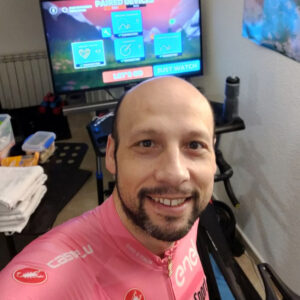 Congratulations on your upgrade to Category A!

I am so pleased you enjoyed it, look forward to seeing you on Monday nights.﻿👍﻿

did i miss the bit where Lucian said he enjoyed it?

Thank God someone is actually reading my posts with some empathy!!! I am so glad you understood me Iain!!

Don’t worry Luciano, empathy is my middle name. I’ve got a lot of middle names though, depending on then situational demand.

It will for sure become a classic for me!

Cat A though? I think you’ll need to post about the ego boost it undoubtedly is and the reality a couple of months down the line (I speak as someone who aspires to the the Cat upgrading, but may live to regret if were to ever happen!)

What?! You are not Cat A?! I only exchange with Cat A riders… (now you see the egomaniac boost effect) ﻿😀﻿

A fantastic article and a great effort!!! You seem to be a “Hulk”, improved by jumping up to “A”. My output will be below that for sure – but I want to “toast” myself very soon. But difficult to find the right Monday with two racing days Tuesday and Thursday with the colleagues 🙂 . Ride on

I totally understand. ZRL, WRTL TTT, now Madsif Mountain… can’t chase so many rabbits at the same time (Spanish say I am not sure is translatable that way to English but I am sure you get the point). My wife says at the end of the year I will have more “competition” days than Matthieu Van Der Poel 😉