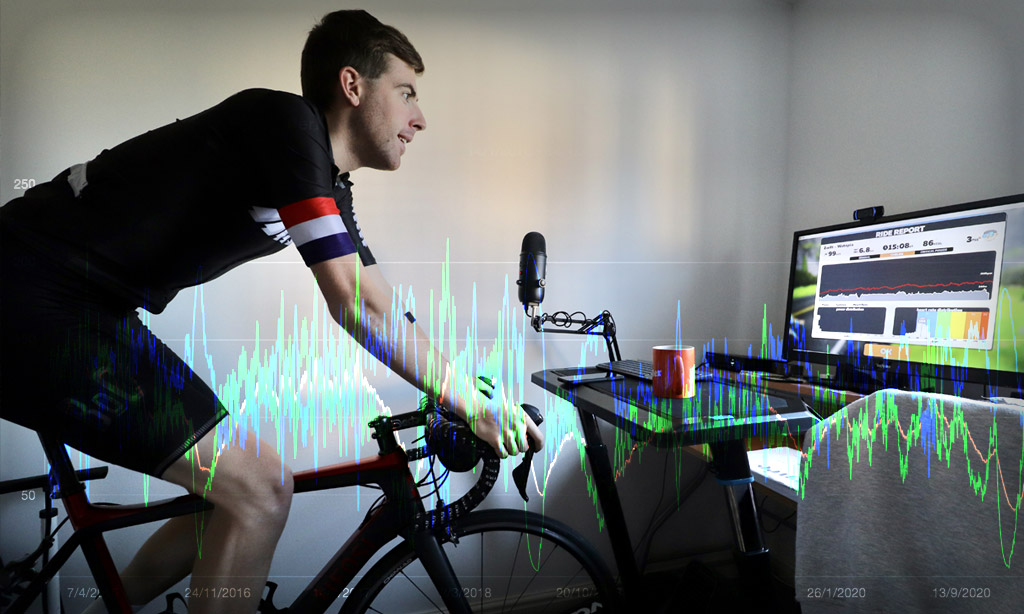 I contracted Covid in mid-November. My girlfriend Charlie works for the NHS and became sick after treating Covid patients. Our flat is small, so isolating from one another was nearly impossible. It was a case of when I would catch it, rather than whether I would catch it. As soon as she tested positive, I stopped riding.

What I have to say isn’t any more important than the next person, but I do want to try and normalise what I’ve been through for people who are in a similar position. I’m very grateful to be given this outlet to give a deeper insight into what it’s like to be at such a high fitness level, then to have it come crashing down because of an illness I had no control over.

Over the next four weeks, I’ll try and provide a bit of background into how things have changed and hopefully how things are improving. Maybe there are some things that can help you in that process.

I started riding again after taking about five weeks off the bike completely. I did this to let my body recover from the Covid symptoms, which included significant fatigue (I felt like I had ridden thousands of kilometers just from putting up the Christmas tree), joint aches (best described as toothache in my joints), a high resting heart rate (approx +20bpm), and a loss of taste and smell (I put my head in the coffee bean jar every day to see if I could smell them). The symptoms lasted around 10 days.

Given my presence on social media, once my diagnosis became public, many people reached out to me with their own stories and experiences of the virus, often giving me friendly advice on what I should and shouldn’t do. But in reality, this virus is different for everyone and nobody really knew the best thing to do, although I appreciate that people were looking out for me and trying their best to help.

One insight I have gained from all my years of racing professionally is how to listen to my body and gauge what it needs. It can be tempting to rush back into training and racing, but sometimes you have to let it tell you when it’s ready and not let a gadget decide when you’re ready. I have learned this the hard way after years and years of being in tune with my body and my performance, and I believe this is a skill that applies to both elite and recreational cyclists.

As my symptoms eased at the start of December, I decided to get back on the bike, riding as and when I felt like it.

Gradually I regained my confidence, although I was still wary of pushing myself – there is still very limited information on Covid-19 and its impact on athletic performance and recovery, so I felt like I was traveling unchartered territory.

To pass the time and provide some incentive to test myself, a group of us came together to ride the Rapha Festive 500. I’ve always found group riding motivational, and since this was the first time I’d actually set out to do the Festive 500, we made sure to spread the load evenly through the week to manage any lasting fatigue (and loss of fitness!). It was a great milestone for me, allowing me to ride mainly in zone 1 with the odd sprinkle of intensity just to test the waters.

I felt good during the Festive 500, so I decided to take the plunge and enter a short chase race on Zwift to further test my health and fitness. Unfortunately, I promptly got dispatched with just 6km to go on the rolling NYC terrain. I thought that I may get dropped (although you always hope it doesn’t), but until I raced I didn’t know it would happen for sure, so it gave a benchmark to work from.

At this point I had been symptom-free for almost 3 weeks, and had been taking it very steadily. So steady in fact that I was beginning to wonder how much fitness I had lost – not just from the virus, but from other factors out of my control. My racing season had been ended prematurely by lockdowns, leading to a steady de-conditioning in the run-up to my catching the virus, and once Charlie became unwell, I decided to take time off the bike to give my body a chance to fight the virus. This led to me taking a whole month off riding, with very little intensity in my training the weeks before that break.

I was in the dark when it came to knowing where my fitness was, and I knew I needed to do something about that.

At the beginning of January, I used Zwift to complete two FTP tests: a ramp test and then the following day I completed a standard 20-minute test. The 20-minute test is far more suited to my physiology, riding style, and my strengths as a climber. Ramp tests really don’t suit me; however, it did yield an interesting number of 304wFTP. Twenty-four hours later the 20-minute test yielded 309. So, a gain of 5w overnight… just kidding (I’d clearly worked off the Christmas biscuits in sweat).

To put it in perspective, my FTP in October 2020 was 383w, the highest it’s ever been, largely down to my racing background and always changing the sessions and training I do year on year. I’ve taken time off before, a month of no riding usually means a drop in FTP by 40 or so watts. However, as I’m learning here, the larger your capacity, the further you have to fall.

Looking back on the Festive 500, some may be forgiven for thinking that I must be still pretty fit to complete it even post virus with time off. The reality is that I had no symptoms during that period and even with the 85w FTP drop my FTP still stands at 5.2wkg. That’s not a brag, but it’s what you should expect to see in Elite athletes.

Here’s the data from that week, you’ll notice how low the Intensity Factor (IF) for the week is set with an estimated FTP at that point of 320w (I hadn’t done an FTP test at that point). My CTL (Chronic Training Load or Fitness number) was at an all-time low of 40 and keep in mind that the Festive 500, at that intensity, would not have been increasing fitness for me.

These numbers and my performance in the Chase race were a starting point for my journey back to fitness. There’s still a way to go, but I’m optimistic and excited to see what happens over the coming weeks.

I hope you enjoyed this first entry and I’m looking forward to contributing a few more times this month. Take care, look after yourselves, and keep healthy.

Have you contracted Covid and trained yourself back into fitness? Got other questions or comments? Share below! 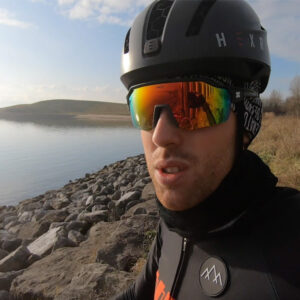 Ed is a former pro cyclist and 2x British champion. After documenting the National Hill Climb Championship on his Youtube channel he decided to pursue his own alternative path in competitive elite cycling, inspired by the likes of Lachlan Morton and Mike Hall, changing their craft. In 2020 he became the 6th fastest rider up Alpe du Zwift (34.19) showing his love for going uphill as fast as possible! Find him on Strava and ZwiftPower.

This is a really interesting read, I had Covid over the Christmas period and got over the main symptoms about 4 weeks ago. I’m aiming to get back on the bike tomorrow but am dreading it due to my expecting to have lost a lot of power, hopefully I can build back up as I was doing quite well in the Zwift races prior to the virus. I’m going to do a bit of retail therapy to give me some impetus. I still find myself out of breath after short activity but am putting this down to having been inactive… Read more »

Thanks Daniel, wishing you all the best on your comeback too 🙂

Ed has a really good Youtube channel, go check it out! Learnt a lot from it. Always fun watching him race. I’m sure he’ll be back to 6w/kg++ in no time..!
https://www.youtube.com/channel/UCYHSrKAKxCNk32ge-uI0fGQ

You are a star ShakeNBakeUK!

Thanks for writing. I find it interesting that you can still to 5 w/kg…I would have thought you would drop more. More interesting will be how fast you get back to where you are competitive and how it compares to a “typical” off-season. Looking forward to reading your journey. Be well.

I didn’t have covid, but I did have an infection without symptoms until it turned chronic, and ended up over-trained from not listening to my body and ramping up too quickly. Have taken a break, and now starting out training again. This is good advice from you no matter what health issue it is that requires a similar approach!

Very interesting stuff! Looking forward to following your road back from this. ﻿👍﻿
Can only agree with previous comments, Ed has a great Youtube channel and community around it. I definitely recommend checking out some of his livestreams and saying ‘hello’ in chat. ﻿😉﻿

this is so so helpful. I too contracted covid over the christmas period. I have had a strange symptom now, while running or cycling that i feel that my lung function/capacity is reduced to like70%. did you experience anything like that?

I get that, like the bottom 20% of my lungs has got stuck. I’m breathing shallower than I was previously but it seems to be getting better. I think the body has some repair work to do there, a bit of unclogging.

Indeed same here, like there is something blocking the lower part of the lungs.
What I did and helped for me is to do breath training. But perhaps the body is still recovering.
Overall it have took me over 3 months to get back on the same level as before covid.
So take your time and listen to your own body, and if needed get medical advice from a doctor.

really interesting stuff, as a key worker it was the same when not if scenario for me, Caught C19 at the beginning of november, couldn’t touch the bike for 6 weeks, I had mild asthma which is now moderate asthma, daren’t do an ftp yet, I was ftp at 310w, my hr was around 150-160 just below threshold, it’s now 140 at 200w,, like you my rhr has gone up 20 bpm. I’m very slowly improving I think. I’m a complete amateur but it’s been really useful to hear your experience and it gives me some hope, thanks for sharing.

Short summary: If you are into endurance sport and you get covid, make sure you don’t get long covid. If you do – there is a concoction of vitamins and other stuff that helped me. Sorry about the length of this… I’m fanatical about cycling (road and MTB) / fitness / Zwift. I’m 66 years old and 92 kg. In February 2020 I had my best day on Zwift and in a race did 3.8 w/kg, 345w. Chuffed. Next day I went down with something, thought it was a cold but had a sort of tingling sensation. Over the course of… Read more »

Thanks for putting this together, really inspiring to know that it will get better! I’ve just got out of bed for the first time in three days and I’m dreading learning how much this has killed off my running/cycling progress. At the moment it feels like I’ve just got out of the sea after having swam all day against the tide. Knackered, cold and achey.