How to Pace Your Best Zwift Bologna TT Race 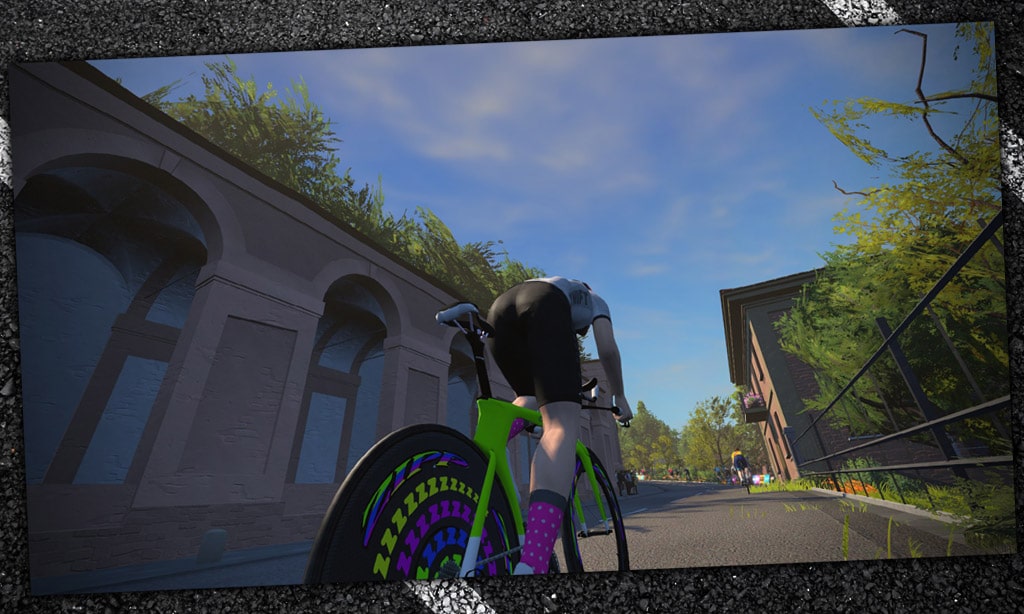 Want to turn in your very best performance on this route? You’ll need to give some thought to perfecting your pacing strategy. Here’s a video from our favorite Lama down under, Shane Miller (who happens to be a very experienced TT racer outside):

“Go hardest when you’re going slowest.” That is Shane’s basic strategy, and it’s backed by basic physics. The faster you are moving, the more power it takes to further increase your speed. So if you want to trim time, speed up your slowest section(s).

This actually works out nicely as an illustration of proper pacing strategy. Let’s look at some numbers from BikeCalculator.com which illustrate why this strategy works:

So you can see, it makes good sense to conserve a bit on the flats so you can go over threshold for the climb.

In Shane’s test, applying the BestBikeSplit strategy resulted in a time of 17:36. However, if Shane held a steady effort, his time was 18:15.

Both efforts averaged 292 watts, but the optimized pacing shaved 39 seconds off his overall time. That’s huge!

Hopefully this insight helps you smash your next TT effort. Go get it!

This is actually really useful information that applies in so many situations!

Hey Eric, really interesting! How much would you input for IF factor, and for MAX% ftp? thanks!

How about changing bikes ? I saw someone mention that on FB, can’t say I’d ever thought of ait and not sure it’s possible in a race !

In the Giro stage, only a few riders changed bikes, but non of them were going for the stage win. The KOM winner, based on the time only on the climb, changed: he just used the time trial bike to avoid losing too much time on the flats. But the time taken to change isn’t made up with a lighter climbing bike on so short a climb.

I used Eric’s data for flat and climbing times for both road and TT and used the flat/climb split of the course and all TT frames are faster than any road frame on this course. It looks like aero trumps lightweight for the most part (6km flat vs 2km climb so that makes sense). Best possible set up is either P5x or Felt IA with 858/super 9 wheels. Roughly 23 seconds faster than Zwift TT and 32mm carbon wheels. Good lower level/lower budget option would be Cervelo P5 with Zipp 808s which is about 20 seconds faster (for an 18… Read more »

The relatively low power of Shane’s result, 292 watts for a sub-18 minute time trial, is suspicious. I wonder the program used NP = FTP as a constraint, rather than NP = maximum sustained power for the duration. Certainly for constant power, with NP = AP, and CP20 = around 105-107% FTP, he could have averaged in the 315-325 watt range with FTP = 300. So I’m not sure being so far substantially under FTP on the flat part is optimal. Maybe go close to FTP (8-9 minutes @ FTP empties only 13-15% of the tank) then spend your anaerobic… Read more »

Thanks for the article. I used this strategy my last TT on the course. It worked great! I’m getting ready for it again. Looking for your following article. You mentioned a post about testing frames and wheels on the route. I can’t find it though.

I’ll add a link above as well.

I just skimmed the article without watching Shane’s YouTube vid before giving this a go yesterday. Intuitively, I thought I’d maintain about 90-95% FTP to start, go to 100% at the start of the climb, ramp to 110% at the first steep portion, dial it back, then try to sustain 120% at the second steep bit (which is even steeper than the first), then whatever was left in the tank to the finish line. If I’m reading the graph correctly, the Best Bike Split plan was to have Shane start with as low as 80% of his FTP on the… Read more »