How the Race Was Lost: Tour of Watopia, Stage 4 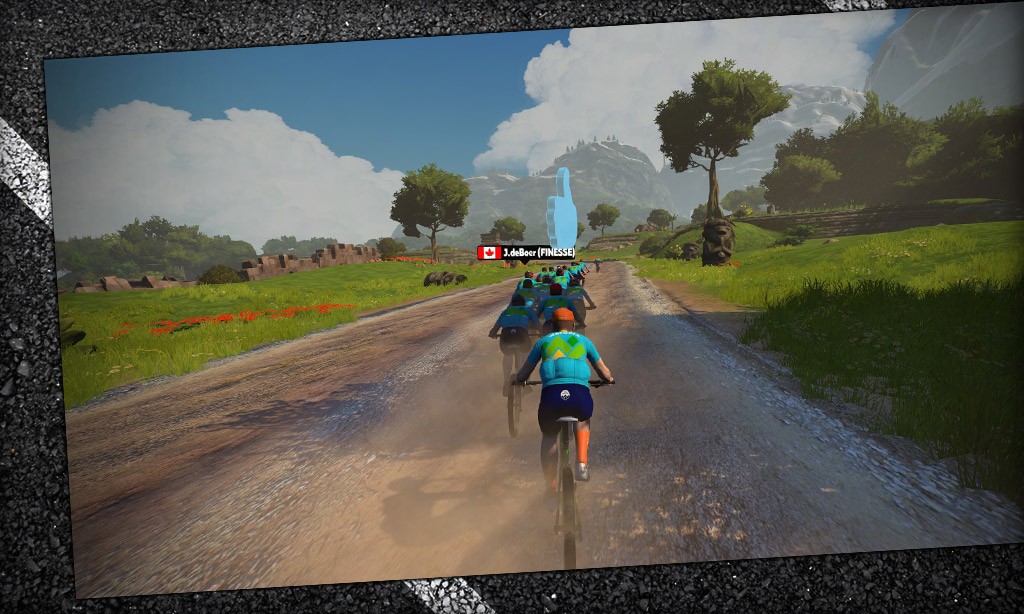 Continuing my plan is to race each Tour of Watopia stage, it was stage 4 at 6:10am for me. Two laps of the Jungle Circuit, a route I haven’t raced much, but know well.

Course knowledge didn’t put me at ease, though: quite the opposite, in fact. I knew the climbing half of the circuit would be super-challenging, and I just hoped I could hold onto the front of the race as we climbed up through the ruins not once, but twice.

Bike selection is a non-issue for this stage, because Zwift has configured the event to put everyone on the Zwift Mountain Bike. You can’t ride anything else, so embrace it!

I rolled out of bed at 5am, chewed two pieces of caffeine gum, put some PR lotion on the legs, and kitted up. Then I hit Tempus Fugit for longer, ~15-mile warmup. I wanted to ease my legs into the effort, because they were sore from a long “socially distanced” hike two days before.

(I can ride 100 miles and not feel sore the next day, but get me out running or hiking for a much shorter time and my legs are in pain for two days. Sad.)

The warmup felt pretty good – my heart rate was responsive, bumping up into the 160’s during hard efforts. That’s always a good sign for me. If I can’t get the heart rate up it means I’m not recovered (or I’m getting sick). Time to race!

The Jungle Circuit route begins from the Jungle start pens, winding down tarmac to the dirt portion of the Jungle. Today’s start was pretty easy, because 1) everyone was on the same bike, so the roadies weren’t attacking on the pavement and 2) we all knew the climb was where things would break up.

343 watts for 60 seconds kept me in the front group. Our initial starting bunch of 83 was quickly cut in half before we reached the bottom of the Jungle dirt.

We crossed the start banner for the first time and began our first of two climbs. And that’s when things got hectic!

Our first jungle climb took around 5 minutes and 20 seconds, and I averaged 360 watts (4.3 w/kg) to just barely stay with the front. It was a max effort! As we crossed the rope bridge it was clear that the second big selection had been made: we had a front group of 20.

The descent to the start/finish banner was quite easy, with the group easing up since no one was chasing hard from behind and we had another climb ahead. I tried to recover as much as possible, but I knew this final climb was going to hurt bad. I had my doubts about holding onto the pack, but I resolved myself to give it all I had.

Soon enough we hit that second climb and the group immediately strung out. And I was at the back! A gap opened up a few riders ahead, and I didn’t have the legs to jump across. And that was it. The front rode away, and I couldn’t even hold the wheels of the two riders who had been dropped with me.

The second climb took me about 20 seconds longer than the first, with an average power around 30 watts lower. The front pack went hard up that climb!

There was a pack of 5 riders 30 seconds back. I quickly did the math and decided I should be able to stay away, as long as they don’t push too hard. So I buckled down to finish the climb and TT it home with whatever I had left in the legs. I kept a wary eye on the gap as we neared the finish, and it steadily dropped to 20 seconds, then 10.

In the final few hundred meters one rider jumped from the chase group, and that inspired me to use my aero powerup and push it hard to the line so he couldn’t pass me.

I finished 19th according to Zwift. 13th on ZwiftPower.

No major revelations from this race: it reminded me that climbing is my weakness. I need to keep building that 3-5 minute power and dropping a bit more weight.

This race also has me looking forward to returning to well-managed community races who have much less sandbagging. These ToW races are a bit too influenced by sandbaggers for my taste. Many of the riders who finished ahead of me were legit, don’t get me wrong! But there were several in the 4.3-4.6 w/kg range who doubtless pushed the speed of that front group up the climbs.

Did you race ToW stage 4? Share your experience below!

Cool report! Outdoor season is on, but will give it a try tomorrow. Sounds like sandbagging can be a good tactic😉

Great race recap! Always fun to hear other people talk through their experiences racing on Zwift.

In the real world, having a good five minute power helps me because I live in an area with some rollers but nothing longer than 5 or 6 minutes. The jungle is a pretty good simulation for the types of efforts I see outdoors. I didn’t do the race but as always, the front of the group ride was rolling!

I was in the group behind Eric’s group. I couldn’t hang with them on the climb. I am a new Zwifter and new racer who frequently gets dropped on the climbs. One interesting thing I’ve noticed is how light all of the riders are compared to me. I am consistently the heaviest or second heaviest rider in the ToW B races. I know I’m by no means small at 6’2” and and estimated 210 lbs. (95 kgs.), but I’m not big either. Weight to be confirmed (just ordered a Withings scale). I certainly need to trim up my dad bod,… Read more »

Well done Eric! I thought of riding with you but this would mean 6.10am race. I prefer the race 2 hours later. However, good to see you survived the jungle.

One thing to mention when I analyzed your ride is your cadence in that race. You are jumping between 90ish and 60ish (one or the other). Is there a method behind it?

Just alternating sitting and standing. With my rocker plate standing is easy and natural, and it gives me some muscle recovery as well so I do it quite a bit, especially on efforts that have some climbing!

I just completed this race and came in somewhere around 20th. There was a big split in the dust on the first descent, and i was caught behind it. During the race i thought it was complete BS, but looking back, it was a good move by the front group getting away in the dust. Snapping the elastic downhill is not easy

I’m mid 40s, and fair shape. I don’t do races but stick with the tour group rides. I’m a pure D rider, so I simply strive to stay out of the bottom 10th percentile in the overall groups. Then as I get halfway into the rides, I just try to snipe the person in front of me, and keep an eye on the person in back – create mini-challenges to push myself, despite not being in the front… also not getting lapped is a great motivator as well, but a 5 lap Jungle ride gives the A riders plenty of… Read more »

Did Zwift change the wheel resistance on dirt in the past year? My times on the jungle circuit from this time a year ago are much better and I was using a road bike. I thought moutain bikes were supposed to be faster on that surface…and please don’t tell me I’m just weaker than I was (even if its true)

Where have you been, Matt? 🙂

Thank You!!! I feel much better despite being a knucklehead

I enjoy the challenge of trying to keep up with the lead pack. I always ride with guys younger and lighter than myself (59, 5’9″ and 205lbs) but I can put out descent wattage so I can hang with them if they pull most of the time. I am a D class rider no doubt. I have learned to let the sandbaggers leave me in their dust (literally in stage 4). My comment is that even ZP is allowing them to place. I raced yesterday Class D and was 59th on Zwift (“Winner” 4.43w/kg and 199W) and 8th on ZP… Read more »

I am a junior and I weigh 105 lbs so I average very high w/kg to keep up on the flat. I think juniors like me aren’t really “sandbaggers”, we are just trying to keep up.

Ed B.
Reply to  Milo

It’s not you, it’s the guys that are putting out 200-300 watts, 2.7w/kg and up, no HR and are blowing away everyone. They know they’re in the wrong category. Good luck to you Milo.

First place rider in my B race had an average power of 370W equal to 4.6W/kg, I got dropped from the lead group in an early 3% DOWNHILL section while pushing 5.0W/kg. Interesting experience… Than (as the day before during the Shorter Ride of Stage 4) we were a nice group of 4-5 riders working well together for the most time. 4.1W/kg average and a ZP pos. 3 for me, finishing 8th acc. to Zwift.