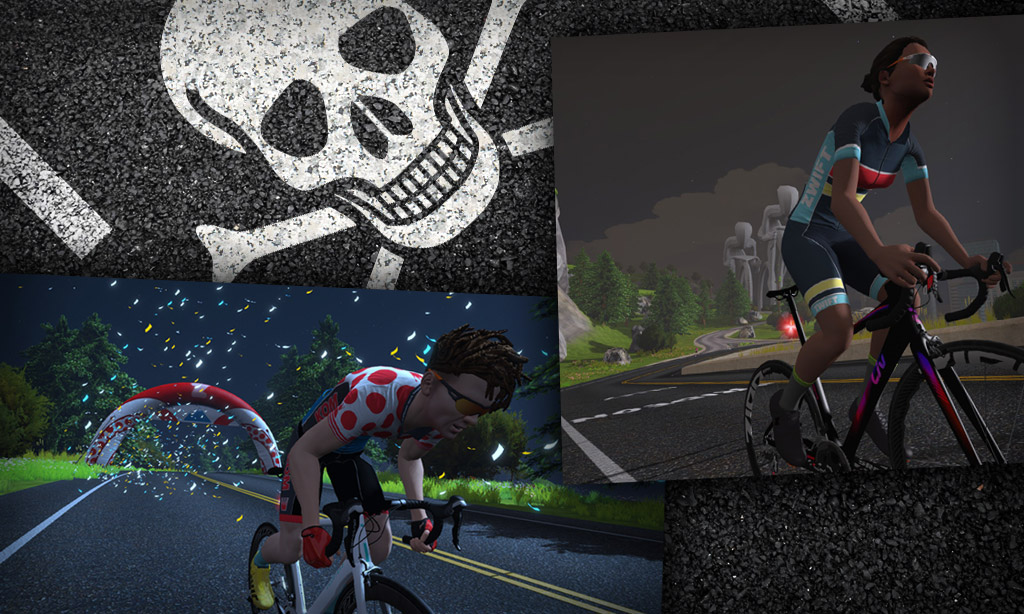 Our newest Rebel Route is a pitchy little number covering the upper portion of Watopia’s oldest climb, “the KOM”. It’s a fun loop if you’re looking to build sprint/anaerobic power (easy on the descents, all in for the climbs), seeking a personal challenge (how close can you get to the Strava KOM?) or just wanting to compete with a friend on a little-known loop.

Watopia’s KOM banner is your start/finish line. From the KOM banner you will descend for a bit, then make a hard right into a short kicker climb. Keep your speed up over the crest, descend a bit more toward the statues, then turn right onto the “KOM BYpass” road.

This new section was added in Zwift’s December 2020 update and is slightly downhill in this direction. Gather speed on this bypass road, then smash it once you turn right onto the KOM, as this is the longest sustained climb of the entire loop.

This loop is never flat! Its descents are more gradual than its climbs, so you get to have fun whizzing down the hills, then hitting the punchy climbs nice and hard!

The easiest way to get onto this circuit is to choose “Hilly Route” from your Watopia route options. This will take you up the KOM in a forward direction. Once you hit the KOM banner your loop has started, meaning you’ve got a lead-in of about 1.8km (1.1 miles).

Here are the turns you’ll need to make to successfully complete the Hilly KOM Bypass Loop, beginning in downtown Watopia after selecting the Hilly Route:

Zwift needs to make this an official “circuit.” Any way to press them on it?

Carsten Re. from Germany
Reply to  Derek

this direction is far too easy; the reverse is better

I like it in this direction because the climbing is steeper and punchier. Which are the only climbs I like. ﻿😅﻿

I still wish Zwift would allow you to create your own route so you could create things like this without having to manually turn during a ride. I’m sure it wouldn’t be that difficult, especially if simply stored locally.

Agreed. If it’s two complicated, Zwift could at least provide it to event promoters.

Carsten Re. from Germany
Reply to  C.L.F.

Oh yes, it would be 1 of 2 perfect short Crit-Courses for Watopia … that’s why I have offered this route to Eric some weeks ago and I would call this “Plateau Loop”. I hope that Zwift will take this on the official route list in the near future ﻿😎﻿. The other perfect Crit-Course will be the “Italian Villas Sprint Circuit”, which I would call “Sea Lion Crit” ﻿😊﻿.

Sounds great Eric 🤗 … so, let’s hope that ZHQ will like one or both routes, too … for our “punchy race fun” 😎🤣

How about doing the same with Epic KOM? Up/down Epic, then turn right before bridge onto Epic Bypass and go up Epic again. Kind of like Lutscher

Carsten Re. from Germany
Reply to  Martijn ten Ham

No way … too much climbing for Eric 🙈😉🤣 … but you are right Martijn, this would be a (hardcore) course for the pure climbers with a seldom uphill finish at the KOM Banner … and I would call it the “Epic Roller Coaster”

JayDee
Reply to  Carsten Re. from Germany

They should make a route with finish at the radio tower finally. Very few climbers routes in Zwift that end at the top of a climb. Actually there’s just three I think: Alpe, Ven-Top and The Lutscher.

How about adding the rebel routes to Zwift hub?

With such a huge proportion of Zwifters never doing group activities, I think it would be really good for Zwift to add more new short routes like this – especially in Watopia – to give something new for the badge hunters.
With the many short route Makuri Islands, it seems they realised that most of us don’t have time to complete the longer routes, and it’d be nice to have a load of new ones to complete in Watopia.