Some people love the holidays, and some people hate them. I hate that the holidays often bring more virus issues like colds. Colds suck. The week started off AWESOME only to go sideways midweek with the onset of a cold. Fortunately, it was short-lived, and I got to get back at it on the weekend. While still not a perfect week, it was better than the last one.

I mistakenly thought that the week leading into Christmas would be calm and quiet. Yes, I thought that I would have plenty of time to train and recover. Or… one of my officemates could bring in something that his kid got from the petri dish of a school that he attends. Grrr.

To make it worse, I got a last-minute invite to a big event that would definitely be described as mandatory fun. Don’t get me wrong, the party was fun, but I would have much preferred to be able to go to bed early, not have a couple glasses of Buchanan 18 year-old Scotch (ok, that’s not true), and listen to some really loud music for six hours. Friday was a bit rough, as my ears were still ringing from the noise, and I sucked down some DayQuil to help with the congestion.

Anyway, getting back to the training: Monday went well. A nice easy 10.5-mile run, commuting to and from work, and a good strength workout got things off right. Tuesday followed with a nice swim, 16 by 25 meters followed by 5 by 200 meters alternating regular and with paddles. Wednesday is when things started to go awry. I had a good strength-focused bike workout, followed by commuting to and from work, and the SkillZ and DrillZ Ride. Even before the ride home, I could feel the cold coming on. On Thursday morning, I woke up and felt it. I tried to get a run in, but I called it at 10K. I just didn’t have anything else in me! Friday became a rest day. I got home from work and crawled in bed at 7PM. It was awesome! I slept for 12 hours and woke up feeling much better.

Getting good rest on Friday was very important because Saturday I had the TeamODZ Superhero race. (It actually had a much longer name, but I don’t have enough space to type it out here.) The race format was basically a super Cat & Mouse, with teams of nine riders starting at different intervals based on the average FTP and w/kg of the riders. First team with five riders to finish wins.

Because of my slight cold, I did not feel like I would be one of the top five riders for my team. Thus, I planned to do a lot of work on the climbs and sit in on the flats. From the gun, our plan fell apart, as riders had technical issues and the second time up Box Hill proved too tough, splitting our group apart and leaving me as the fifth rider. Just short of vomit output level, I pulled the plug and eased off, quickly losing 45 seconds to the other four. Eventually, I grouped back up with two other teammates, and we drilled it to the end. Let’s just say, we didn’t win. A for effort, though. Twenty minutes after the race, I did my last strength workout of the week. Yeah, it sucked, but I got it done. Here’s the video to prove it:

I ended up taking Sunday off. I wish I took it off because I dug so deep that I was still gassed. Nope. I went to a Christmas party Saturday night and then to a friend’s house afterward. I behaved at the party, even leaving by 9:30, but the BS session turned into an accidental Rusty Nail marathon. I walked home at almost 2 AM and did not get nearly the amount of sleep that I should have. So, I just rested on the recliner for a good portion of the day, catching up on tv shows that I have missed over the last few months. Besides, I had a big day planned for Monday, so extra rest was probably a good thing. 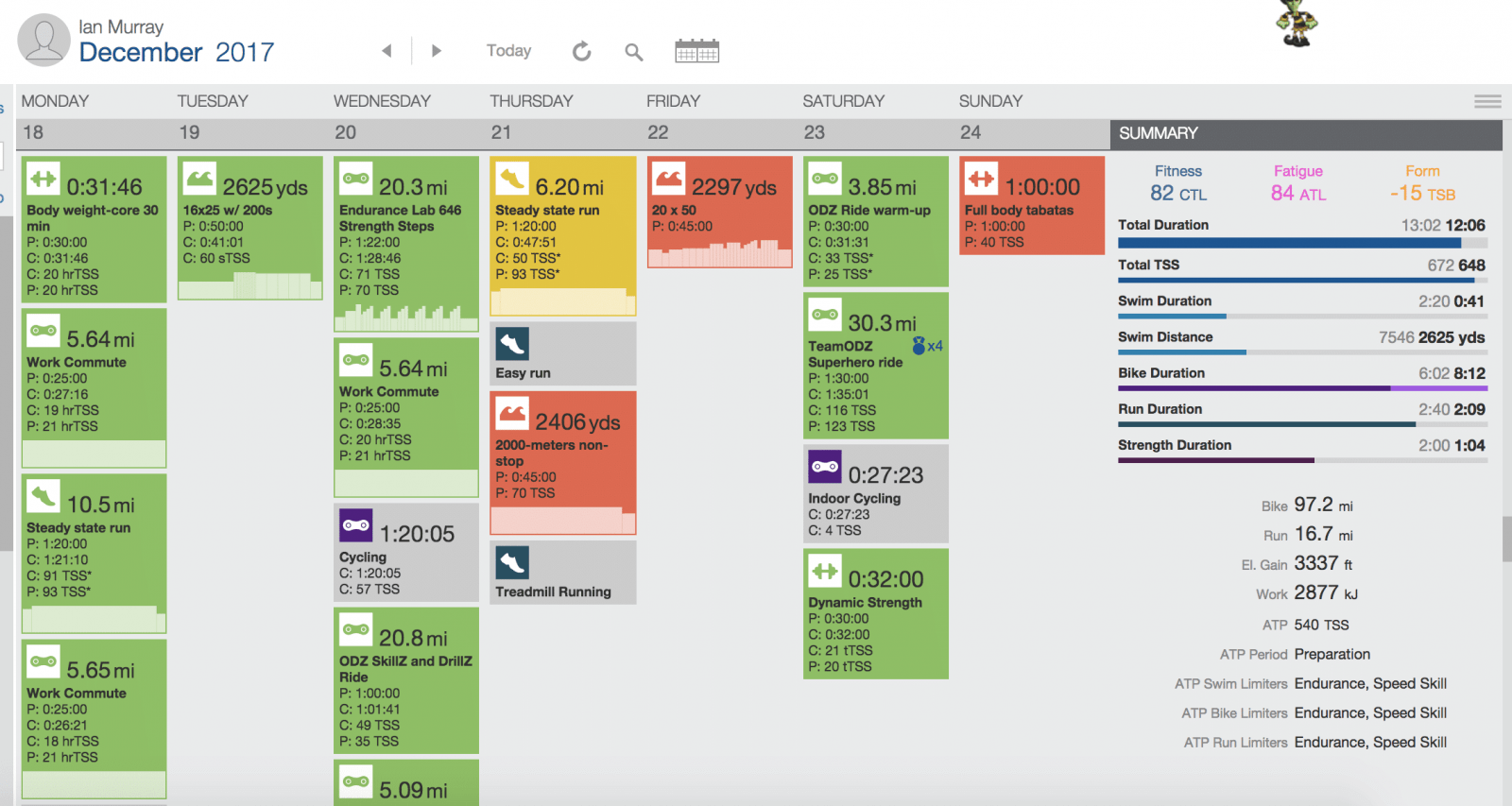 This will finally be an easier week at work because most people are on vacation. I will be able to roll in a little late and take off a little early to get in a second workout. On Christmas, I gave myself a little present, 120K on the bike and a 30-minute run after. The rest of the week is a little better up until New Year’s Eve when I plan on adding a 3K swim and an additional 30 minutes of running to the mix. 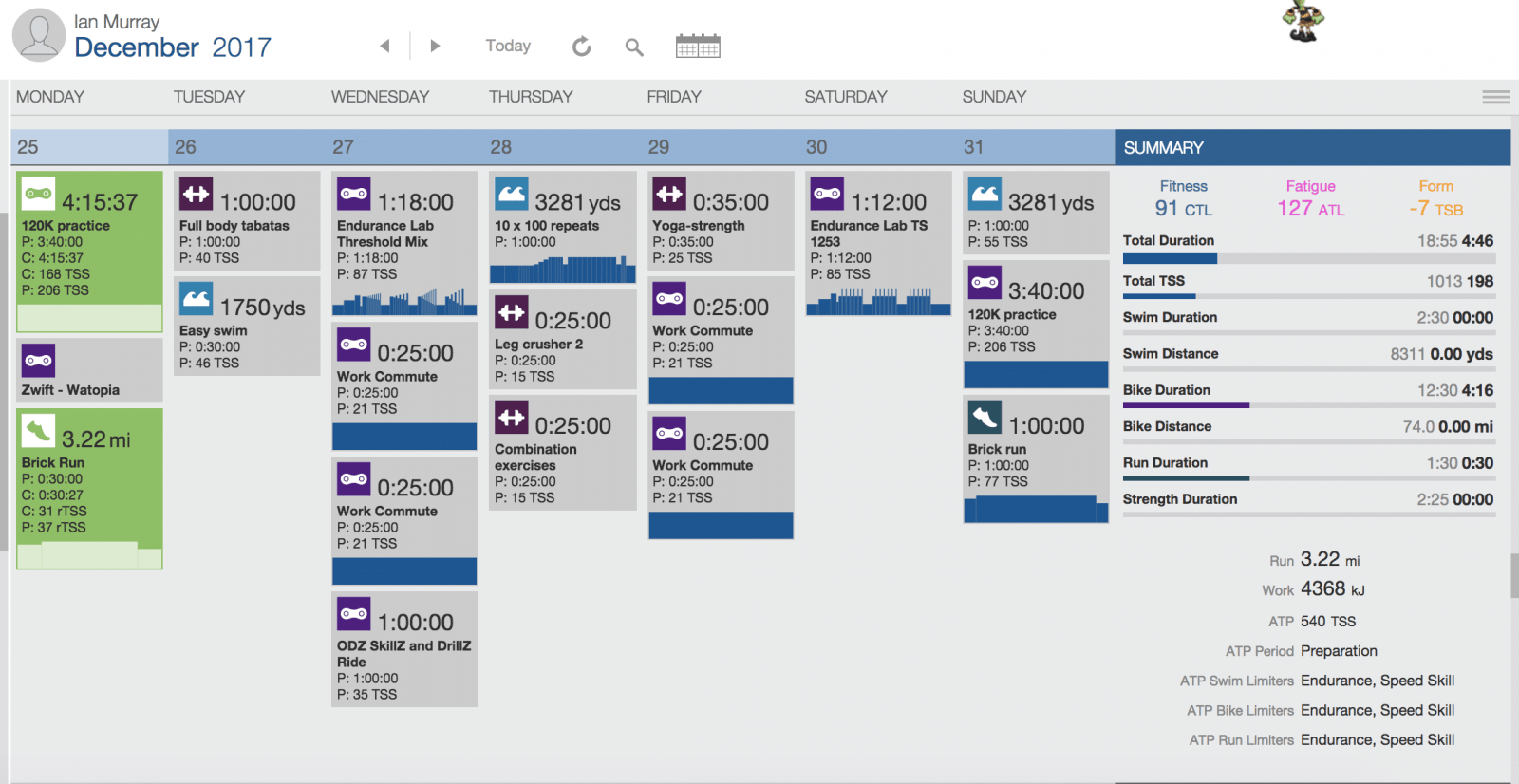 So, some of you may be asking yourselves, “What the hell is he doing?” Yes, I know that some of this makes little sense from the perspective of a standard build. However, I am coming off of having a fair bit of mileage in the legs and want to build the volume up quickly. To do so, I am sacrificing a little intensity and spending more time in the saddle. Some of this is because I have some work travel coming up in January that will keep me off of my bike, and some is because I have a plan. Once my volume is up, I will pull the Fast Freddie Rodriguez methodology. I will go progressively closer to race effort for the distance, reducing the saddle time but increasing the intensity. Meanwhile, I will pick up the swim and run volume. By May, I want the 120K to feel like nothing. I want to get off the bike feeling fairly fresh. I will likely ride a bit longer of distances as we progress just to really get the legs ready. Plus, I can generally take a fair amount of TSS, as long as I get my seven to eight hours of sleep per night.

We’ll see how it goes this week. The goal TSS is a bit high, but I have done much more than that on a number of occasions. I’ll be riding around Watopia or London on Sunday for about four hours and then running for one. Drop on in or throw me a ride on. I’m sure I will need it at some point during the ride.

On that note, it’s off to bed for me. I’ll get Week 4’s recap up a little quicker, as I have the day after my long workout off to sit on the couch and recover. See you out on the course. Until then, look for me on Wednesday mornings at 5:15 AM EDT leading an Endurance Lab group workout and 6:30 PM EDT on the ODZ SkillZ and DrillZ ride.