Gearing up for the sprint 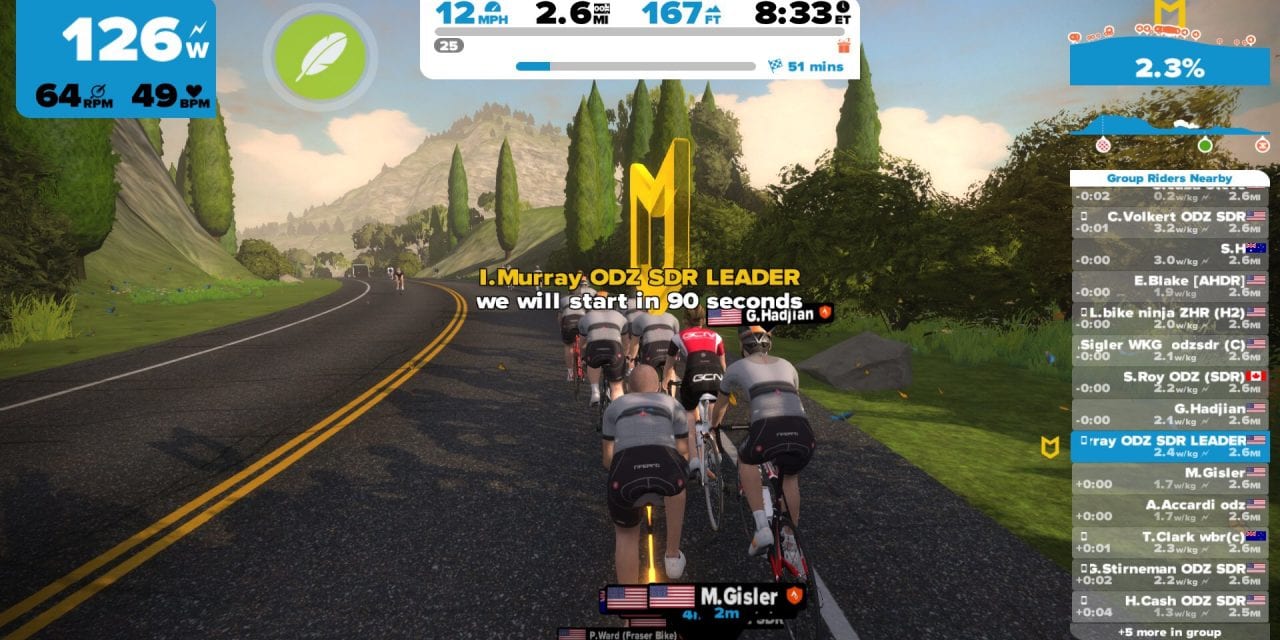 Castelli SkillZ and DrillZ Ride, 31 May – Getting yourself ready for a sprint can be a daunting, pressure-filled task.  Since the vast majority of us are not elite/professional-level riders, we rarely have a lead-out train to help us out.  Thus, we are often left to our own devices, where we inevitably have more opportunities to screw it up than we need.  As usual, you can see the entire class on Zwift Live by ODZ on Facebook or watch below:

When I thought of the best way to shape this class, I simply had to remember all of the times I messed up my sprint finish.  Whether the sprint is for the town line with your buddies or for the win at a national-level event, poor gear choice will cost you.  That’s why we started today by showing how not to do it and ended on the right way to do things.

Like normal, we began our class with the usual ten minutes of warm-up by practicing moving around the bunch.  We always try to reinforce this skill, as maintaining a smart position in the peloton can be the difference maker in determining who gets the win or who gets dropped.

After our brief warm-up, we got in to the section of the class that I called “What Not to Gear.”  The first focus was the inevitable problem of over-gearing the sprint.  By that, I simply mean that we shift into too hard of a gear to start the sprint in an efficient manner.  When we over-gear, our ability to get that initial burst pretty much goes away.  That is because we have to put so much effort into turning the pedals over that the stroke is choppy, as is the power transfer.  Thus, we burn extra energy gripping and pulling on the bars instead of transferring that energy into the pedals.

The inefficiency can best be equated to shifting into fourth or fifth gear in your car and trying to accelerate from a slow speed.  Clearly, fourth and fifth gears are not meant to be used until the vehicle has reached a certain minimum speed threshold.  It is the same on the bike.  If you are in your 18-tooth sprocket, shifting into the 11-tooth sprocket without going the appropriate speed will leave you with a gear ratio that just won’t work. 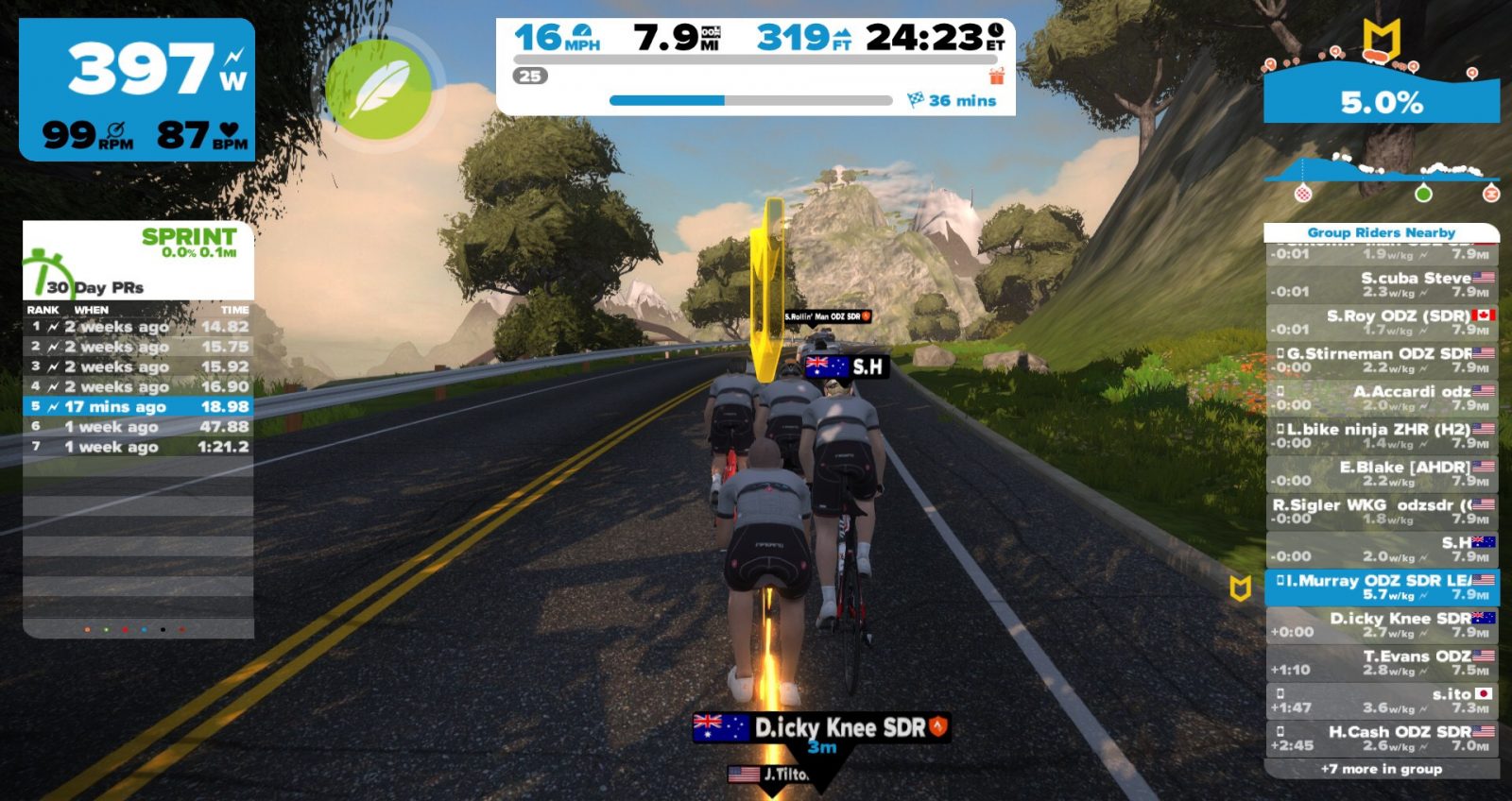 The other end of the spectrum is just as problematic.  Rather than over-gear, some riders routinely under-gear and end up spinning out the gears, leaving them unable to produce high-end watts.  Sticking with our car metaphor, under-gearing is like driving on the interstate in second or third gear.  The engine whines and the tachometer pushes all the way to the red.  At a certain point, the car just won’t go any faster despite more power being available in the engine.  The lower gearing may still afford you the opportunity to burst away from your competition, but you will quickly hit your top-end velocity without any additional shifting.

Stressing Out Your Drivetrain

As we discussed the two techniques not to employ, we briefly hit on other fatal flaws that usually follow from poor gearing choices.  The reason is because your chain is a bit of a prima donna.  It doesn’t like to shift under strain or stress.  It really prefers nice smooth shifting when the tension is not at a high level.

That’s great when we are just tooling around but is not very helpful in the heat of bicycle battles.  No, it actually is a critical weakness in the drivetrain construct on bicycles.  I’m not an engineer, though, so I have no solutions for you other than try not to shift with the strain under maximum stress.

In our two previous scenarios, shifting will likely lead to a problem.  In the over-gearing case, you probably have to shift to an easier gear as other riders get away from you.  The extra stress on the chain and derailleurs will probably cause some skipping, popping, and maybe dropping of the chain.  In the worst case, you could break the chain, quickly ending your sprint.  Actually, any of the above-mentioned problems will take you out of contention immediately.  In the case of under-gearing, you will have to shift more often or do cross multiple gears at one time to compensate for the cadence and gearing ratio.  The jumping of multiple gears while holding a high cadence likely will result in similar problems as over-gearing, except the problems will occur when the chain teeth of the newly-selected sprocket attempt to catch the chain.  A broken chain is less likely to occur, but you also risk shifting past an efficient gear trying to stop the bouncing from the excessive cadence. 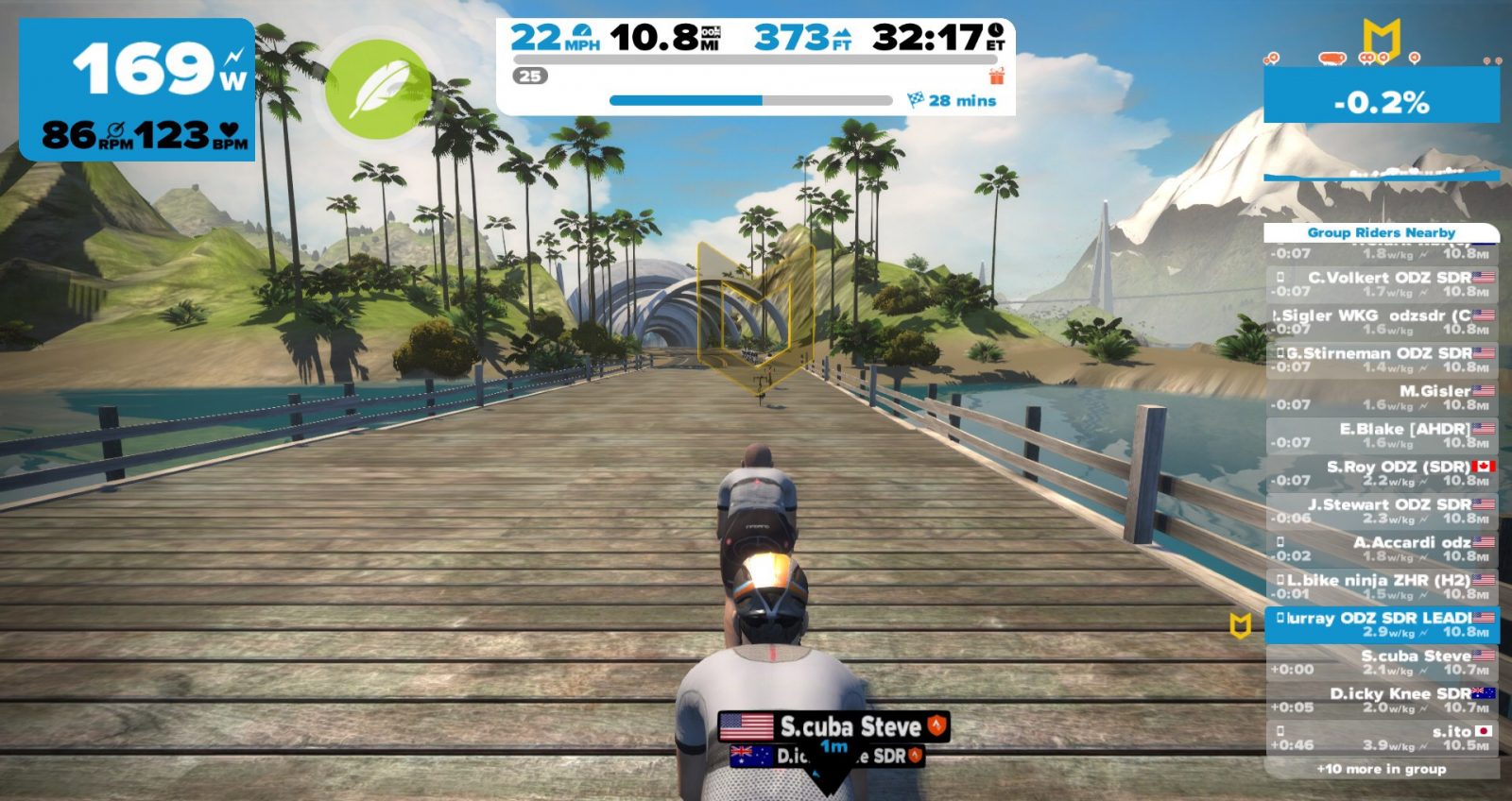 Getting to the Meat

When we talk about sprinting from speed, we are really talking about opening up your sprint when you are already pretty much pegged.  This type of sprint is all about your ability to dig deep and hold it.  This type of sprint is not usually a very long one, so the key is getting a good jump.  After the jump, you really have to hold that top-end power, which makes your gear selection crucial.  You do not want to spin out, as your power will drop significantly, and over-gearing will cause you to lock up.  We practiced this a couple of times from the group before switching to the tactical sprint. 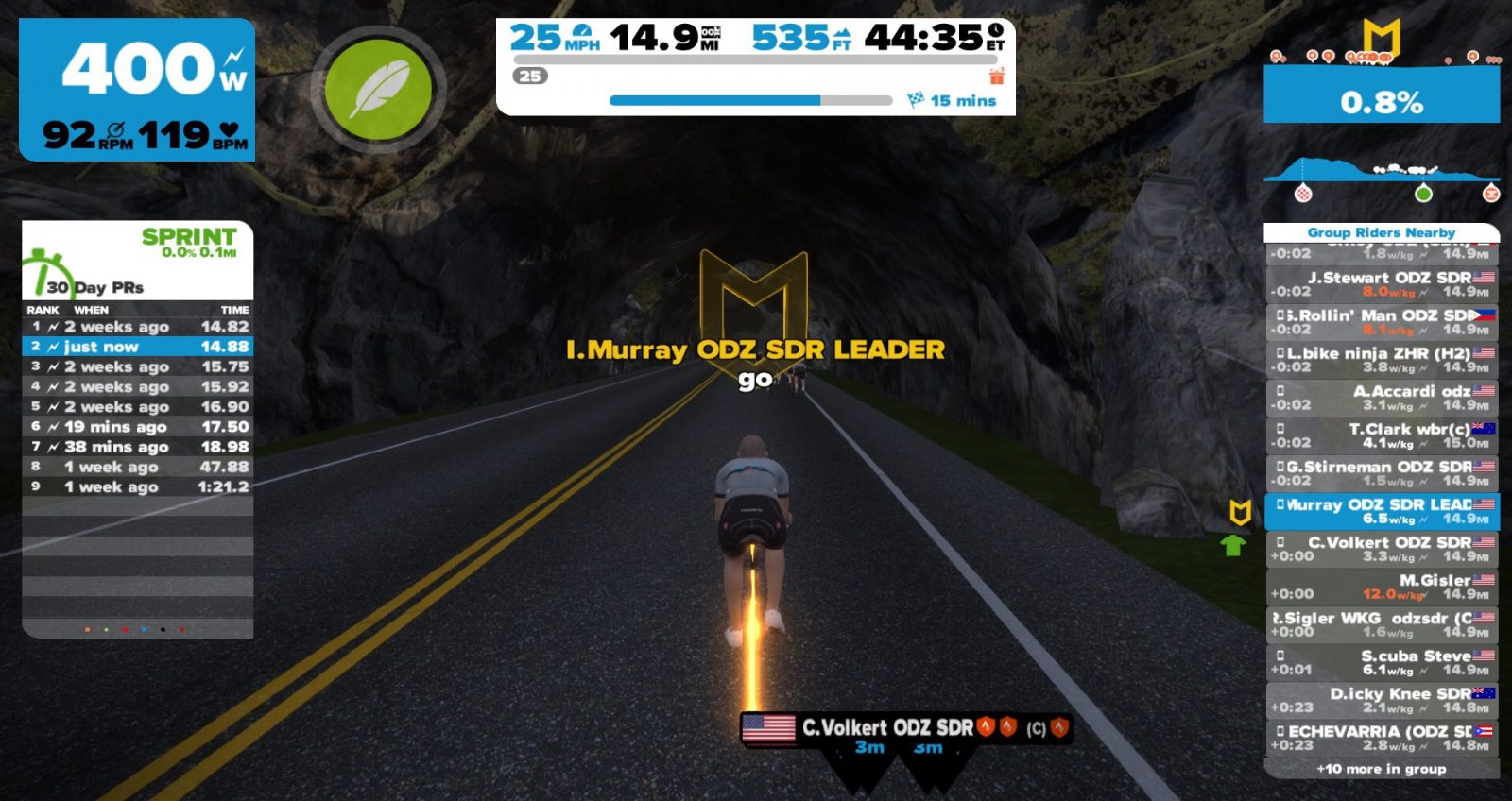 The tactical sprint is much like playing speed chess.  You have very little time to make decisions.  Sure, the speed slows down, but everything usually unfolds in the last 600 meters.  Well, it does unless you are racing with certain people who always start the sprint from one kilometer out.  As I said, the speed usually drops off significantly as the finish line approaches.  Riders attempt to position themselves in a position of advantage, which usually causes the slowdown due to nobody wanting to be on the front.  Once in your tactically advantageous (or not) position, you have to determine the right time to make your move.  When you go, though, you have to commit.  The success of the tactical sprint lies in the ability to make a huge burst and get up to top speed as quickly as possible.  The element of surprise, which comes from being in an advantageous position, combined with the rapid acceleration will create the gap that limits the ability of the chasers to use the attackers draft to slingshot around the attacker.

The key to gearing on the tactical sprint is to have enough resistance in the drivetrain to allow for the burst.  You will likely have to shift at least once, but if you set the move up correctly and picked a good gear, one should be enough.  When you do make the shift, slightly ease off the pedals to limit the risk of any skipping, popping, or dropping.

Ok, even if you execute the gearing choice to perfection, there is no guarantee you will win the race.  You will have the best opportunity available, but you still have to generate the power and hold it through the finish.  During your workouts, practice your gearing, so you know the appropriate selection for each situation. That will give you a leg up on your competition the next time you come down to a reduced field sprint.

Next week, we’ll cover recognizing and initiating an attack.  Until then, Ride On! 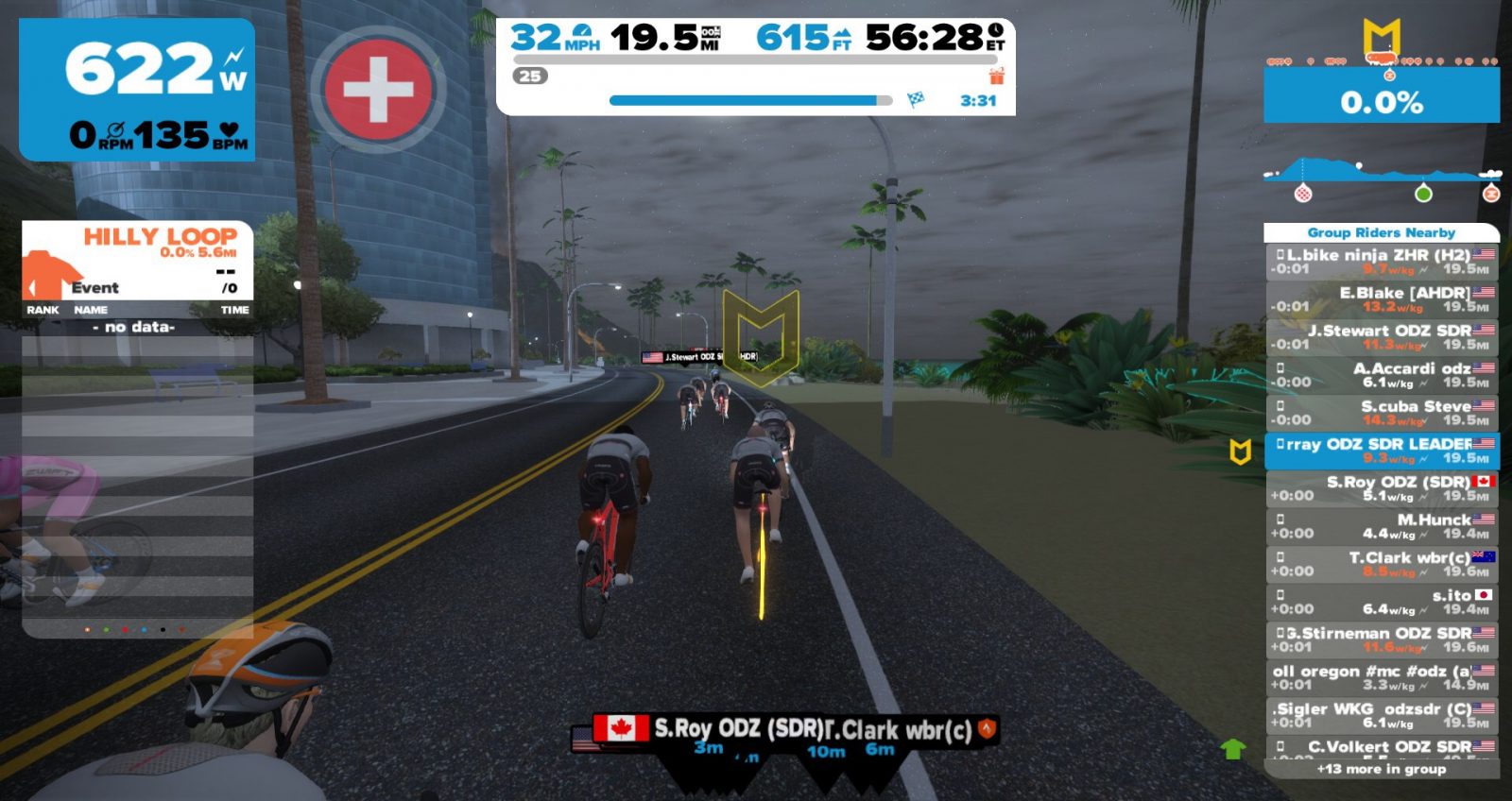