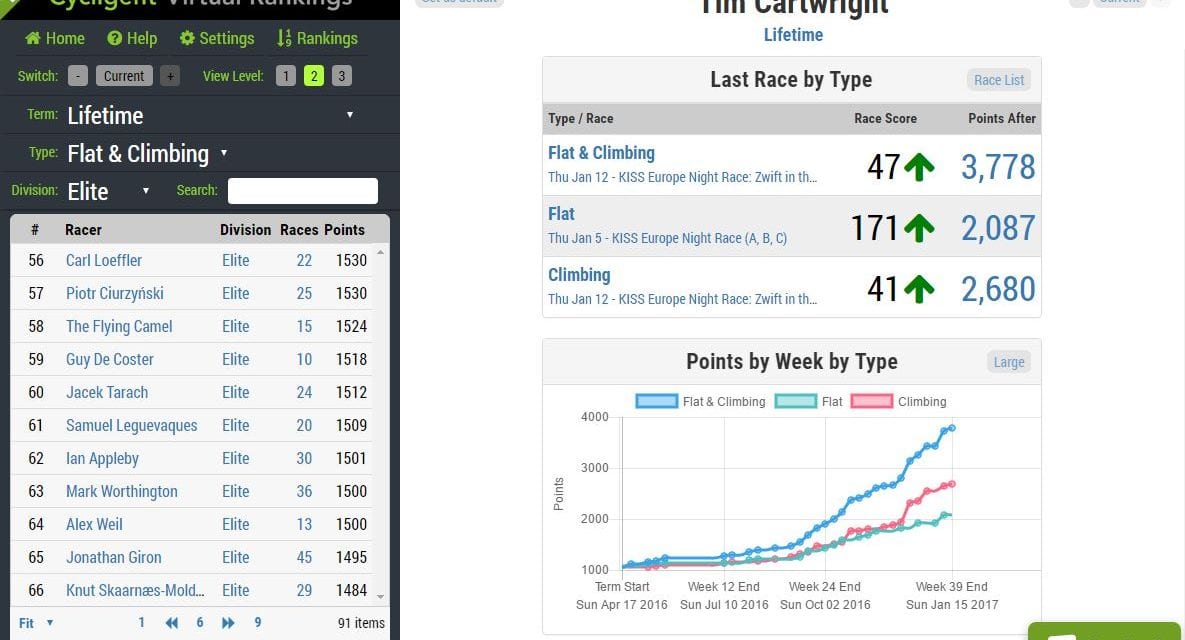 Yesterday I posted about the launch of Cycligent Virtual Rankings (CVR) at ZwiftRankings.com. Read that post for details, but to summarize, CVR is a powerful tool which can be used to rank and categorize Zwift Racers.

As a followup I’ve interviewed Frank Garcia, the man who led the charge in CVR’s development. He is a longtime elite Zwift racer and the CEO of Cycligent, and I wanted to get a better feel for how this project began, who worked on it, and where Frank would like to see it go.

Frank, I know this project was your “baby.” But I’m sure many more people were involved in many ways. Can you tell me who they are and what they did?

Lots of people involved and I have not event listed everybody!

There are so many within the Cycligent organization that have done so much. The have been amazingly supportive.  I owe a debt of gratitude to them all.

Tell me about the genesis of this project. What inspired you to begin, and how long ago was that?

I get joy out of racing and want more people to enjoy it as well.  I wanted people to appreciate the importance of race craft (drafting, tactics, attacks, chases, etc) on their performance versus just raw watts.

After a bit I thought the best way to approach this was a ranking system to help illustrate the importance of race craft and that would also allow people to feel a sense of accomplishment, not just by making a podium, but by improving relative to other people with similar performance levels. I also wanted to create a system that would inspire continuous improvement versus, “Oh wow I don’t want to be promoted to the next category where I will get trashed.”

As for how long ago, the ideas around what this might look like started to formulate six to nine months ago. It became a serious effort the week before Thanksgiving in the US (middle to end of November).

I know the decision is up to specific race organizers, but do you know if there are specific races which will be using the new divisions in the near future?

It is up to the race organizers but we have talked with some that are looking into it.  I don’t want to put anyone on the spot so I won’t call out any by name.  I can say, however, I was surprised by the level of interest so I think it may be coming to some races soon.

How did your team come up with the overall points/divisions/ranking system–is it based on something which already exists, or are you all just geniuses? Or both?

Many of the concepts come from motor racing.  iRacing (online motor racing simulation) follows the same concepts.  We know it works and works well (100,000s of people on iRacing for instance).  We wanted a flexible system that would allow for racing times across the globe and for people of varying ability racing together.  The concepts had to be adapted to the physical nature of cycling.  You can’t really race 10 times a day on a bike (well not well anyway).

What would you like to see this project accomplish? Or to put it another way: if we were to fast-forward one year, and this project has “succeeded” by your definition–what would that look like?

Are there other features coming soon which you can share with us?

We hope to introduce features for non-racers (challenges – distance, climbing, etc) to have some fun with rankings.

What can the Zwift community do to help support this project?

The community can help us by providing feedback on how we can make it better and then being patient with us as we tweak things according to that feedback.  Rankings may shift and we are most concerned about people accepting that so we ask that they be tolerant of that while we are in beta.

If any Zwifters find CVR bugs or have questions or suggestions, who should they contact and how?

There is a questions or contact us tab on the site (may not appear on mobile currently we are looking into that).  We are also in the process of setting up a forum.

Who is Cycligent and what do you do?

Cycligent sponsors Team X and that is how it came be involved in Zwift and rankings. Cycligent is a framework, tool and cloud company dedicated to making web application development easier. We provide a visual, graphical Git dashboard for instance that allows you to push projects to the Cycligent cloud. Once there Cycligent Cloud runs your application with messaging, competing consumers, redundancy, etc, even though you did not code for those items. The rankings site is built completely on this platform (which by the way runs on top of AWS).

Is there anything else you’d like me to mention?

Two out of the three biggest things you already mentioned in yesterday’s post.  That is this is built on some outstanding work by the pioneers and that we don’t intend this as a replacement for any existing system we are aware of (i.e. we intend to continue to work closely with ZwiftPower and the community).

The other thing is that for a period of time the rankings will shift, not due to just race performance, but as we make tweaks based on community feedback.  This might be unsettling and we ask people to be tolerant as we improve the system.