Have you ever wanted to see Watopia from above? To get a bird’s eye view of the place? Thanks to a months-old Zwift bug, it’s easy to do.

So we jumped on and gave it a try. Lo and behold, it’s easy to go full-ET in Watopia!

Getting airborne is simple (at least on a Windows PC, which is the only place we’ve tested this bug):

Fly At Your Own Risk

We have to put a disclaimer here, of course: any time you purposely “activate” a software bug, unintended consequences may occur. That may include Zwift behaving oddly in terms of the data it records, visuals it shows, or how the game behaves. For example:

Fly at your own risk, ya freakin hacker!

We thought about keeping this bug under wraps, but it’s a fun bug without any real downside. (That is, it doesn’t let people cheat in races, give you unrealistic speeds, or impact other Zwifters’ enjoyment of the game.)

So we thought it was worth sharing, for the adventurous few who may want to take to the skies before Zwift fixes this bug.

Have you tried this, perhaps on a system other than Windows PC? Share your experience below!

Happened to me in Makuri Island a few months back, just flew out to sea till I reached the edge of the map.

Same here, I desperatey wanted it to drop me on Fuji!

There is one cheat…I went up up up at an incredible rate. If I didn’t already have the tron and wanted it, it was super easy elevation gain.

I have the Elite Sterzo and was able to do 360’s around the dinosaurs, flew through the mountains to the epic KOM, crossed back over/through the bridge, and had a great time! 😉

Interesting that it works with the Sterzo, but not the KICKR Bike’s steering!

I was able to steer through the sky with an Elite Sterzo as well. When I finished the Repack Ridge route, it put me directly in “fly mode”.

Same thing happen to me, but as some point it stop allowing me to steer and I just ran into the end of the map. Kind of like the boat hitting the end of the world in the Truman Show.

I was using an iPad.

Yep same here with the Sterzo Smart and a cheap LeNovo M8 android tablet. I don’t know if it’s the tablet, but the riding experience on Repack Ridge is awful – so much lag any speed at all puts me in wild oscillations. The first few times I became unstuck I thought it was because I missed the finishing arch.

Same; I’ve noticed than generally you can keep the free-world riding and have the correct gradient (in terms of resistance being sent to the trainer, and remaining on top of the road/world) as long as you keep to the direction you’re supposed to be travelling, and you stick to the direction that you select at a junction. I’ve once selected “go right to downtown” at sequoia circle, but turned left on the steering to head towards the wind farm (and then ended up clipping under the world at the ramp out of the underwater tunnels). Couple of other fun things… Read more »

OMG..this is hilarious! I have to try it!

This happened to me also. I’m on Mac, so not only a PC thing.

It’s been occurring on a Mac since before January. Picked up a Sterzo after Christmas and has occurred every time after completing the ridge.

Repack Ridge has been broken on PC for me for well over a year. First it wouldn’t respond to steering input (iPhone on handlebars), then this – which happened right at the end of a run

Carsten Re. from Germany
Reply to  Rosso

Hahaha … which bike is recommended in the sky ? … I think, we should go with the most “air-o” 😉

I did, in fact! Same Crr as normal pavement.

Taco Cat is going to experiment to see if the Zwift taco truck will fly using this method. Will report back with results.

Been there back in December! Got some great snaps of the dinosaurs in Titan Grove. Sadly no elevation was gained, completely flat and stopped after the desert turnaround.

Why wasn’t this called “ET Mode”? 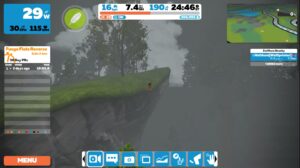 What no ET theme ?

I’ve had this happen multiple times. I was able to ride way off the road in either side of the main paved road after exiting Repack Ridge. Kinda of fun

Gives new meaning to going with an aero setup!

I’ve long wished they would add a flying bike route. I mean, someone pedaled-flew over the English Channel like 40 years ago. Make it so if you don’t hold your target power you crash and have to restart. It would be a fun addition.

Happened to me quitting the ridge a few months back , I reported the bug and said they’d look into it but not heard anything back , after the initial puzzlement I soon got bored 😐

Mac OS and took off when trying to quit ride. Then thought screw it and went over and under mountains, across the sea etc for another 20 min or so.

I chased down the blimp and then flew through the ferris wheel….

I have a ELITE STERZO SMART STEERING BLOCK and have been able to fly all over Watopia. With the Elite Sterzo smart I am able to change directions but changing altitude is difficult and not always successful. In order to change altitude I have to get back on the original route I selected and ride the route to the altitude I want and the steer off route. Using this technique I have been able to fly with the pterodactyls, swim with the whale, fly inside a brontosaurus and fly inside mountains.

Tried it on a Mac, enjoyed going through the mountains and over the jungle. Went straight into another ride in Watopia afterwards, and ended up underwater off-route.

Aside from flying, you also have much more flexibility when steering back on the road. Must be scary for other riders! (iPad) https://youtu.be/ilPc_J_WyDI