The Easiest (Legal) Way to Get the Tron Bike in Zwift 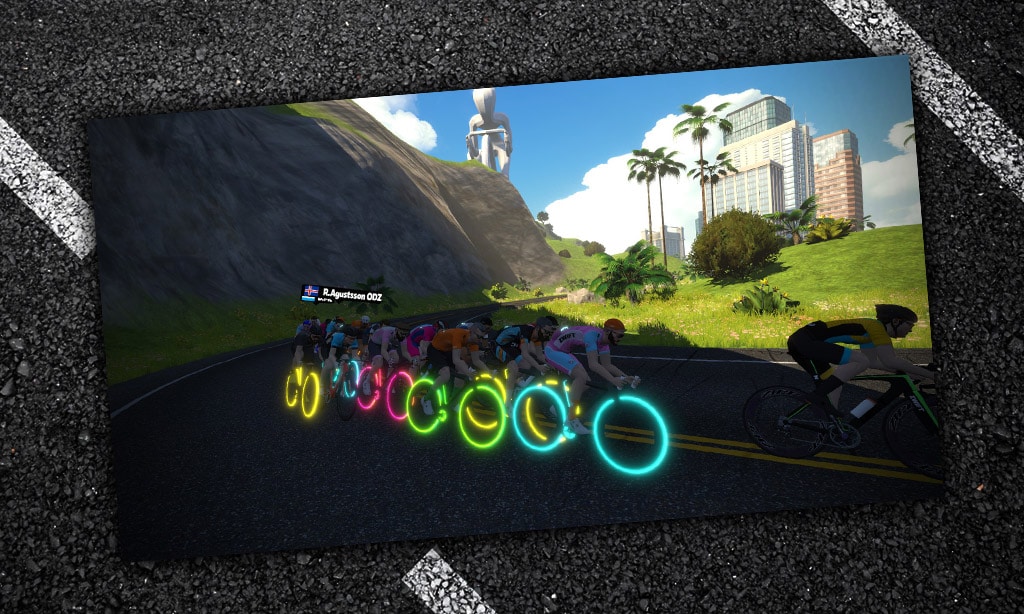 The Tron bike is the most prized ride in Zwift: it’s fast, eye-catching, and difficult to earn.

So of course, you want it in your garage (where it’s called the “Zwift Concept Z1” by the way). But you also want to make obtaining it as painless as possible. There’s no getting around the fact that you’ll have to climb 50,000 meters to earn the Tron bike, unless you’re willing to cheat. But are there ways to do that climbing more efficiently, so your watts result in as much elevation as possible?

Traditionally, Zwifters have focused on four different Watopian climbs when working toward their Tron bike. Watopia is usually chosen because this map is always available, it has long/difficult climbs, and there are numerous climbs to choose from.

We did some tests with a 75kg rider up these four climbs, where the rider pedaled at 300 watts whenever pedaling was required. Here are the results.

The Hilly KOM forward climb was Watopia’s first, and many a Tron bike has been earned on it. It’s a short effort (2-3 minutes for most), and riders simply do repeats: ride up, flip a u-turn to ride down, then flip a u-turn and do it all over again.

This climb has the advantage of being easily accessible (the road isn’t level-locked and you begin your ride nearby) as well as short–it’s not an intimidating mountain like Alpe du Zwift.

In our test, we road up the hill at 300 watts (4 w/kg), turned around at the KOM banner, got up to speed, then stopped pedaling for the descent.

There’s a “bowl” section at the end of the Epic KOM where riders have tried to “cheat” a bit by using gravity and inertia to do some of the climbing.

The easiest way to find this section is to ride the forward Epic KOM, then turn around once you hit the banner at the top. You can coast down until the road turns up, then begin pedaling once your rider slows. Pedal to the top of that small rise, turn around, descend, then pedal up to the KOM banner where you turn around and do it all again. Lots of coasting, right? Seems easy!

We tried to be as efficient as possible in our tests, only pedaling on the descents to get us up to 30km/hr, then coasting the rest of the way. And when the climbs hit we would coast until we dropped below 30km/hr, then begin pedaling. All pedaling was done at 300 watts (4 w/kg).

Trekking to the (Radio) Tower

The radio tower “bonus climb” atop the Epic KOM is very steep, so it seems like a brilliant place for elevation seekers. You won’t move fast up the steep road (average gradient is 14%!) but you’ll tick those meters off quickly.

Keep in mind you have to ride up the Epic KOM first, so getting to this climb takes time and effort.

By far the biggest climb in game, Alpe du Zwift is a solid hour-plus effort for most riders. The fairly steady grade will have you racking up the elevation quickly, but keep in mind you have to ride out to the Alpe before you can climb it, which makes this approach less efficient in terms of overall time requirements.

Additionally, the Alpe is only accessible to level 12+ riders, unless you access it with others.

Looking at the results of our tests for the four climbs above, we can calculate which gets you the most meters of climbing for the least amount of work (watts). All we have to do is convert the hill repeat effort to kilojoules, then divide that by the number of meters the effort got us. Presto! This tells us how many kilojoules per meter we got–the “cost” of each climb. (Lower is better.)

These results show that the Radio Tower is the “easiest” way to accumulate elevation.

But wait. Zwifters don’t ride in a laboratory! We have to get to the climb first, and that needs to be included in the calculations.

So we ran the numbers to learn which of the four climbs above is the most efficient when we talk about starting at the spawn point, riding to the climb, then doing repeats until our ride time hits ~60 minutes.

You’ll notice the increases the per meter “cost” of every climb, which shouldn’t be surprising.

If you extrapolate these numbers out to, say, a 90-minute ride, the rankings and % difference between each stay roughly the same.

So there you have it. Going for a 60-90 minute ride and want to get the most meters you can for your effort? Hit the Alpe! Ride the Road to Sky route 44 times and you’ll have your Tron bike.

Oops, looks like they changed the start point to road to sky on me!

Yeah, I think they basically start at the same spot now.

Just remember to be signed up for the Everest Challenge. I got all excited about getting to 50k but then nothing happened….turns out I didn’t sign up for Everest until a few months after I started Zwifting so I still have 12k to go.

How do I find out if I am signed up to the Everest challenge?

In game go to Menu, then click in the top-right where the challenge selected shows.

Can you combine completing Routes with the Epic KOM “Bowl Hack”? In other words, select the Mountain or Mountain 8 Route, implement the Bowl Hack for a few rounds, then complete the Route and get the Route Achievement award?

Any climbing you do counts as long as you have the Everest Challenge selected.

No, for route achievements you must pick them the loading up Zwift and cannot turnaround or self navigate. If you do and still complete the route you will not receive the badge

I tried 2 times on 2 routes. One register and got badge, another one doesn’t. Still safer to not taking risk self nagivate or turn around for those hard-earned long distance badge.

I understand using watopia, but do the other worlds having any options/good hacks? (Like say lutscher on a workout)

Interesting point, also was this test done before the increased resistance in the jungle, that would skew things in the radio towers favour perhaps?

Of course, the alp does have the bonus of getting the wheels, and then getting massive 1000xp bonus if you get the wheels again.

What if you do Workouts while selecting “Route to the Sky”?.. understand the workouts also require some performance, but you gain height meters while doing workouts against power variation.. or during warmup/cooldown of the workout, you are climbing Alpe du Zwift,…

It works. I do it almost everyday.

This is what I have been doing myself. I choose routes that have a greater elevation going over a shorter length of route. While the ride itself won’t garner you any points for distance, it will get you the elevation rather quickly. You also get access to the Road to Sky (Alp) regardless of what level you’re on by using a training route.

Tried this for the first time with ERG turned on. Took longer to complete but seemed to level out the power. Even picked up badge for climbing the Alps 5 times.

I’m completely confused. Because when I go into Zwift, I don’t see any of these rides. Not one of them.

Make sure you select Watopia … they should show up there

Watch for our speed test chart post coming out tomorrow. You may be surprised!

start at the road to sky/jungle spawn and u turn to climb reverse epic KoM (steeper than forward KoM so better VAM). Takes me 30 minutes or so at 3 w/kg to get to the Radio Tower climb, then do repeats from there. In a 1 hour ride i can do approx 750m of climbing. On the alpe from the same start point I can only climb around 650 – 700m in the hour including the lead in.

You also get free elevation on the descent due to the bowl at the bottom before the junction on the radio tower, and a minute every 10 minutes to rest your legs

Chris, I made a diagram trying to understand what you’re saying. One point…you ONLY do repeats of firetower road once you get there is that right? See my 3 step interpretation of what you said in attachment. 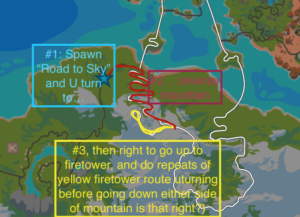 Yes, although i have found an even better technique now, once at the yellow section (above), ride into the dip and onto the climb, once resistance starts to kick in, u turn and ride back up hill to the junction, when the road levels out, u turn, and repeat, this gains elevation faster than climbing to the tower. At 2 w/kg average, i gain 17m/min doing this vs 11m/min climbing to the tower at same power. It is roughly the equivalent of climbing the tower at 3.2w/kg. It involves lots of u turns so prepared to get dizzy! I use… Read more »

SO I heard that if you ride a TT bike that your elevation points rack up sooner, is that true?

Hi Eric, I found a good hack in the small bowl at the start of the radio tower climb, if you are trying to gain elevation during an easier paced ride (say under 2.5 w/kg) you can gain elevation by using the bowl hack in the small bowl section after the radio tower junction. The key is to pedal downhill rather than coast, and keep pedalling until the the resistance kicks in significantly on the trainer (low trainer difficultly helps stop the power ramping up too quickly). In my tests at average power of 150 watts I gained almost double… Read more »

Using the bowl hack on the bowl half way up reverse KoM I got 1157m in 1 hour at 2.3w/kg. Would need to do 3.3w/kg to do this V.A.M. on the Alpe. Need to pedal on the downhill not coast to make the most of the momentum.

If you used this technique from the start of game, you could realistically get the Tron within 2 months of starting. Riding 5 hours a week you could get 50000m in under 9 weeks. It would be a boring intro to zwift, but possible. The start point (road to sky) is unlocked level 6, but this is about a week of riding.

Yet another way is to do thousands of laps around the volcano. Here’s a 100 lap effort that got me some good elevation with minimal effort of climbing… 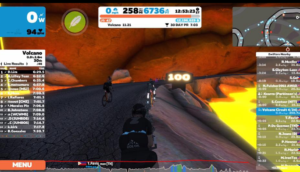 I am curious to know if most people have their trainer difficulty set at max? Minimum? Or something in between?

Would be great having the Ven-Top route added to the list.

Wonder if Ven-Top will ever get additional badges for the number of times climbed like the Alps.