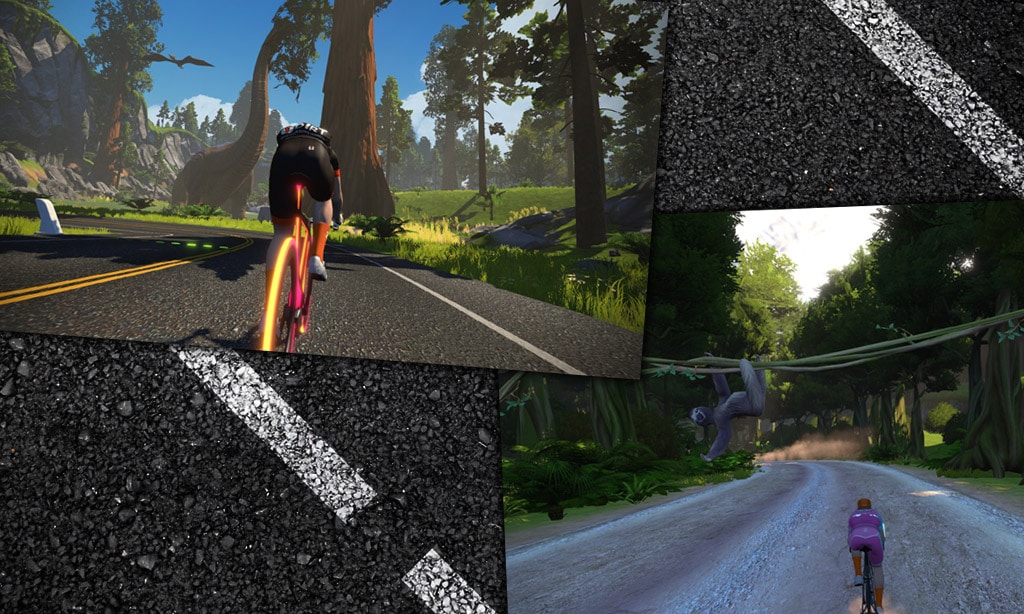 One of five routes rolled out with Zwift’s Titans Grove expansion, “Dust In the Wind” covers Titans Grove twice, as well as Fuego Flats, part of Ocean Boulevard, and a Mayan Jungle out and back.

Along the way you’ll encounter a fair amount of virtual dirt/gravel road, so you might consider using a gravel bike so you can move to the front of the pack and make everyone else eat your dust!

Begin by turning left off of Fuego Flats into Titans Grove reverse. You’ll ride through Titans Grove (north to south), and our Strava segment begins at the top of the Titans Grove KOM.

Descend from the KOM, finish your ride through the redwoods, then turn right and descend down to Ocean Boulevard. Take Ocean Boulevard until you hang a left at the windmills to head to the Mayan Jungle.

Ride the Jungle loop (clockwise), then climb out and return the way you came. Turn right when you hit Ocean Boulevard at the windmills, riding toward downtown Watopia. But you’ll hang a right toward Fuego Flats before you reach downtown.

After crossing the bridge you’ll turn right into Titans Grove to ride it once again in the same direction as before. But at the end, you will turn left and head into Saddle Springs then into the desert to finish your ride at the rock arch finish.

None of the climbs here are particularly long or steep, but you will accumulate a fair amount of elevation over the full route.

Since this route does not begin near a start/finish banner and your actual spawn location will vary a bit, we chose the first banner you ride through as the start point for our Strava segment.

This banner is the Titans Grove reverse KOM banner, which means you have a 5km lead in with a bit of climbing before the official Strava segment begins.

The route ends (and you will receive an achievement badge) the first time you ride through the desert start/finish arch.

Dec 16, 2019: updated segment to begin at the Titans Grove KOM and end at the desert arch. Updated text descriptions accordingly.

Thanks for the course profile and description.

Re. Start/Finish Points: I raced a KISS 100 on this course yesterday, and the:
– Start point: Fuego Flats pen (you make a right from there towards downtown, then a left to Titans Grove)
– Finish point: Fuego Flats finish rock arch

I started an event on the dust in the wind route, but quit the event when I realized it was only 60 minutes long and wasn’t going to finish the route, I continued the route (it picked all the turns correctly for me) and it finished at the rock arch after fuego flats.

Hi Eric, completed for the badge today but Strava doesn’t show completion. Any plans to update?

Dang! I need to do that. Added to the list.

Dang, now after that change I no longer have have the segment complete on strava/veloviewer route hunter

Guess I gotta do it again.

As far as I can tell the new Strava segment is just a slightly shorter version of the old. So having done the old one (starting at the turn to Titans and finishing at that turn again) this should cover the new segment but a segment refresh doesn’t pick it up. I have used the Strava segment match tool – shows as a full match on the map but says its partial and wont pick it up so have submitted a ticket to Strava.

That’s because Strava doesn’t match new Zwift segments with older rides, unlike what it does with outdoor segments. Probably because it would take too much processing power?

Ah that’s so annoying as I completed the route about 24 hours before it was changed…..At least I got the route achievement badge!! But have dropped from 93 to 92 completed on Veloviewer….

Looking at VeloViewer now and 3 people have the new segment and the date of achieving it was long before the change yesterday…they know something we don’t!!!!

……hoping my ticket gets me the segment back!

I’ve heard there is a way you can change your Strava activity to something else (a swim or something?) and then back again to have it match. Have never tried it myself.

it worked!!!! Edited activity to a virtual run and then back to a virtual ride and it picked it up! I now have the segment, so can refresh VeloViewer tomorrow and hopefully be back at 93/93!! THANKS!!

As of the past few days I believe this route badge is not working in Zwift. Rode it four days ago, stopped after the arch, and without noticing, did not get the badge. Tried again today, rode all the way to the Titan kom (third time) and still didn’t get it. Wondering if there might be a start point problem, or the like.

I had the same problem, very frustrating! I carried on until I hit 41 miles or so, just in case the achievement suddenly appeared but no luck.

WTF!!😱💥⚡😡 Same shit here. Rode one lap up around the djungle and back thru Titans Groove Reversed and then the desert back to the finishline but….. nothing happend!!!! Rode one more lap around Titans Groove and back again but then I’ve broken the “The Dust And Sand” Route so nothing again when I passed the Fuego Sprint line under the rocks. 🔥😡😩👎 Jesus Zwift… almost 3 hours of riding and this isn’t the first time. I also did the Surrey Hills two times before I read here that it didn’t work. Zwift.. Do it again and do it right, how… Read more »

I got hosed today on this route by zwift as well. I want my fricken XP points and badge dammit.

No route badge for me either, and I rode through Titans Grove again after The Fuego Flats, just in case…

Yup Same result for me…finished the route at the arch but no badge… q:-(

Rode this one today – got the badge just a bit after the sprint finish. Looks like it may be fixed?