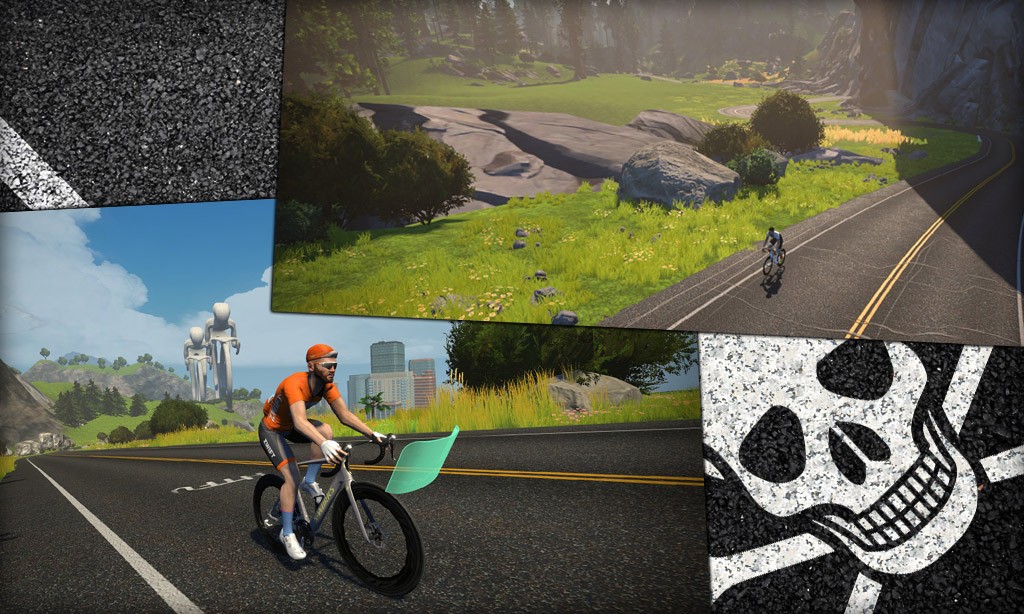 Our newest Rebel Route covers the newest roads in Watopia (Titans Grove) and the oldest (Hilly Route). That means you’ll get to hammer two short KOM climbs with some recovery in between!

The idea for this route came from Shawn McAfee, who you may know through his Zwifty videos. Thanks, Shawn!

Downtown Titans is a medium-length route at 24.6km (15.3 miles) long, and it begins and ends at the downtown Watopia start/finish line. Select the Hilly Route to get started.

Take a quick left onto Ocean Boulevard, then the next left to head toward the desert where a right-hand turn takes you into Titans Grove. This rollercoaster of a road will have you twisting and turning up and down through the giant sequoia trees and even a lost valley with living dinosaurs! But to see the dinos you’ll have to climb the timed KOM first. Top the leaderboard and grab that jersey, then descend to the dinos, wave hello, and continue your rollercoaster road to the end of Titans Grove.

A right turn out of Titans Grove takes you back toward Ocean Boulevard where you will turn another right to head down into the ocean tunnel. Right again to head toward downtown Watopia, then a left to get onto the Hilly Route.

When Watopia first launched (around May 2015), the only road on the island was the Hilly Route. So enjoy yourself – you’re riding a piece of Zwift history! Hit the short forward KOM and see if you can grab that leader’s jersey, then descend the backside through the statues, past Hank’s Gas Station, and over the 360 Bridge.

Soon enough you’ll hit the cobbles of the Italian Villas, where you’ll want to wind up those legs because you’ve got a sprint section coming up. Can you grab the green jersey?

Cross the JWB and hit the ramp in the Esses – another rollercoaster ride toward the final stretch of this route. Once you descend into downtown Watopia and cross the finish line you’re done. Nice work!

This route’s highlights are the two KOMs, as you can see below. Climb up to the top of the Titans Grove KOM, then recover as you descend down to the Ocean Boulevard flat road. Then it’s up-up again to the Hilly KOM, a descent, and rolling/flattish roads to the finish.

Start by choosing the Hilly Route. This will spawn you just before the downtown start/finish, which is where our route begins. There is no significant lead-in to the start of this route.

Here are the turns you’ll need to make to successfully complete Downtown Titans after selecting and starting the Hilly Route.

Has anyone ever heard of anyone riding the whole watopia in 1 ride? Wonder how many miles and what the elevation is if you were to map out a route without a bunch of redundancy.

Aroun 150 km I’d say. The Uber pretzel covers everything except the Titan’s grove if I am not mistaken.If you wanted to ride everything in both ways, then it might be up to 200 km.

Looks awesome, kind of similar to a route I was looking into that would cover the “short side” of the double-sided climbs in Watopia, I guess the addition I’d need is to head towards the epic KOM reverse after the Hilly KOM, then just loop back towards the villas at the Sequoia Circle. I’ll skip the radio tower addition because I picked it to set times against the KOMs.

Custom routes would be a great feature in its own right, but right now, I think this feature would also help reduce congestion.

I’m trying to do all official Zwift rotes + Rebel routes in 12 weeks. This was little bit unexpected extra, but thankfully quite easy to squeeze into my schedule.

It took me 135 miles to hit everything (except the desert turnarounds) both ways, but I also did complete laps of the volcano and jungle (from banner to banner) so that lap times are recorded (so that more than one lap is actually done).