Rebel Route: Down Up Down 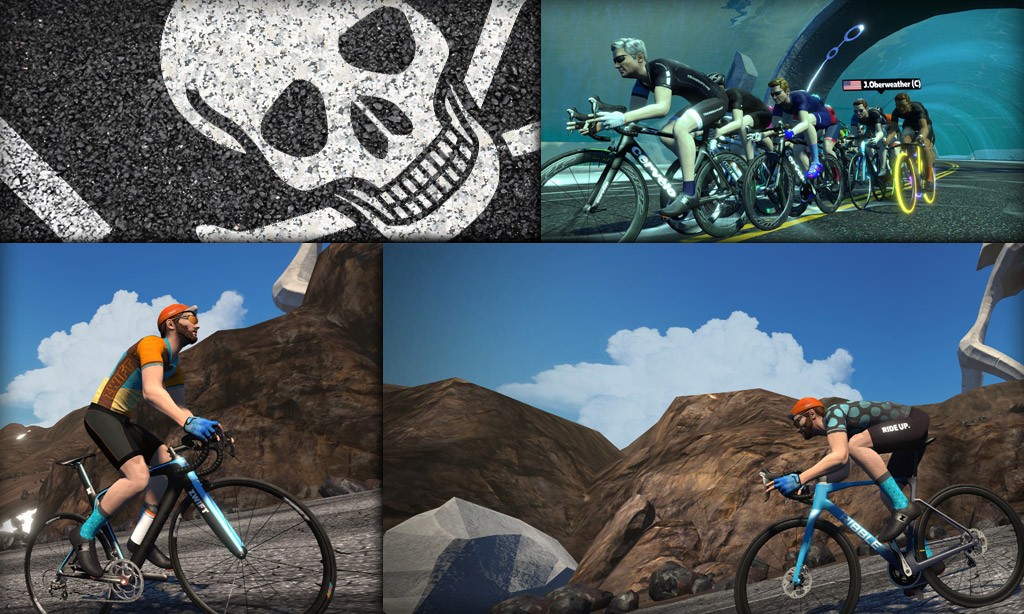 Our newest Rebel Route comes from Zwifter Craig Devonshire, who suggested a route planned along the same theme as the infamous Badwater Ultramarathon. This race travels 135 miles from the lowest point in North America (Death Valley) to the highest point in the continental US (Mount Whitney).

For our Zwifty version, we travel from the lowest point on Watopia (Ocean Boulevard, -5m elevation), to the highest point (Alpe du Zwift, 1047m elevation) then back again. Who will be the first to complete the route in under 90 minutes?

Before we begin, please note that since we summit the Alpe on this route, you must be a level 6 Zwifter or higher to ride it.

Begin in downtown Watopia by selecting the “Flat Route”. Turn left onto Ocean Boulevard, which will take us underwater to the lowest elevation on Watopia. Enjoy the flat roads while you can – they won’t last long.

After you climb out of the tunnel, turn left at the windmills to head over the dock and up the snaking climb toward the Epic KOM and Jungle. The climbing is beginning, but this is just the start! Turn right at the next fork toward the Jungle, then another right once you’re on the Jungle dirt to being the circuit in a counter-clockwise direction.

Another right finds us at the foot of Alpe du Zwift – time to climb! Hammer you way up those 21 turns, take a breather as you ride the ring road at the summit, then descend and retrace your path home!

The route ends at the main downtown Watopia start/finish banner.

Start by choosing Watopia’s Flat Route. This will take you in the right direction for the first portion of the ride.

Here are the turns you’ll need to make to successfully complete Down Up Down. Start by choosing the Flat Route route, or any route that begins in downtown Watopia heading east. The official Strava segment begins at the downtown start/finish banner.

Like the look of this one, going to use if for the next Alpe attempt!
Another Rebel Route Idea:
Always frustrating there is not a ‘short’ mountain loop (like Hilly Loop), without the killer Bonus Climb 😉
Similar to Mountain Route, a short lead in from downtown, the ‘loop’ starts at Sequoia Circle, where you can choose to summit the Epic climb either forwards or backwards, looping back to Sequoia Circle for another lap if you so please!

Thanks for putting this up on the VeloViewer boards before here. Getting it done before the blog post made me feel like a *true* Zwift Insider!

Under the Heading TURN BY TURN you incorrectly refer to this as Toutes les Routes. I think you meant Down Up Down.

Thanks for all you do!