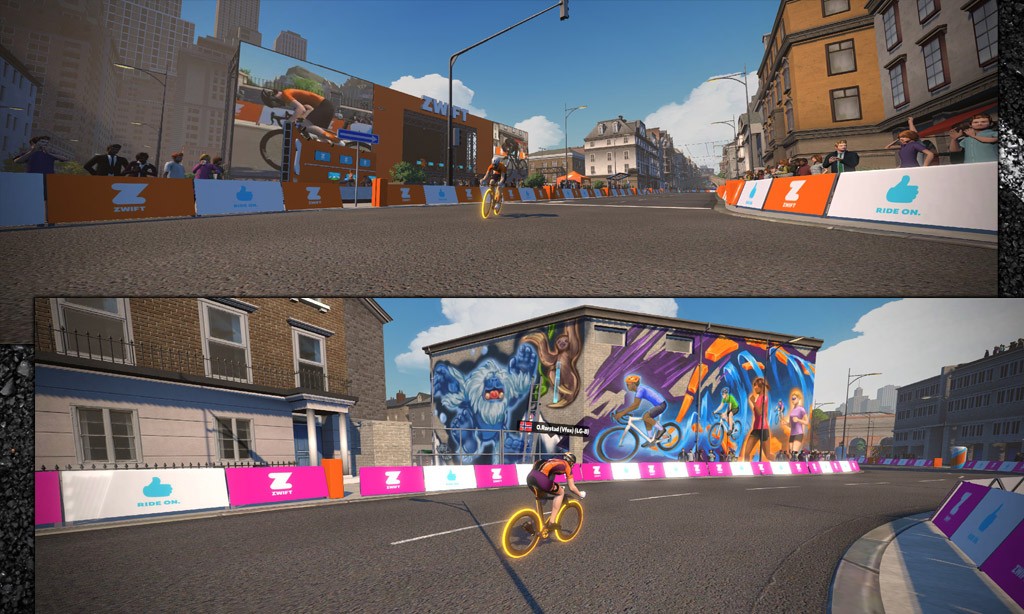 Created with a course layout and visuals to replicate the feel of a downtown city criterium, Crit City is a map created by racers, for racing. And today, for the first time ever, Zwifters have the opportunity to ride and race the new map!

Once you’re done racing the course, a cool-down lap or two will reveal some really nice visuals:

Although Zwift didn’t roll out any new “features” with this map, it’s fair to say that the combination of course layout details makes this a truly unique course in the Zwift universe:

As riders enter this turn, their speed is automatically slowed to around 21 mph. This gives racers another opportunity to dig hard and attack after the deceleration, which keeps things interesting on an otherwise flat course where few attacks happen.

While most of the turns on Crit City could realistically be negotiated while coasting at high speed (just like outside), the two “dead turns” could have auto-braking added. This is the one feature we would like to see added to the Crit City course.

(And we’re not alone in this opinion: the course was launched only hours ago, but already the Zwift Community is saying, “We love the course–but slow us down in the corners!”)

Automatically slowing riders on these turns would result in two key improvements to the race experience: it would make the ride more realistic, as racers wouldn’t be negotiating hairpin turns at 30mph. And it would make races more dynamic by providing two more attack points per lap.

On a course this small, things can get confusing quickly if there are a lot of riders on course. This can be helped in races if event organizers hide other categories (so you only see the category you are racing).

It will be interesting to see how (or even if) chase races work on Crit City, because tracking which groups are ahead and behind will be nearly impossible after several laps, unless Zwift implements some sort of group tracking feature like we’ve seen in Lambchop race broadcasts.

It has to be this way currently, because the course would be crowded with thousands of free riders if it was added to the guest map schedule. This is precisely the sort of map Jon Mayfield talked about when the Guest World feature was rolled out nearly a year ago–a smaller map which allows Zwift to “experiment” with new layouts and features.

Have you raced Crit City yet? What do you think of the routes?

Would the map hack that we used to use in the old days work to get someone into this “world”?

I probably wouldn’t bother, but I am curious nonetheless.

It will not. Like Bologna, you can only get it in via an event.

While Social Media has it’s own voice, Zwift Forums can be used to vote on ideas, such as “Crit City and Slower Turns”. If you want it, click the “vote” button at the top left corner.

Just raced it for the first time last night. The course (Downtown Dolphin) felt like a condensed version of the Innsbruckring. Without auto-braking, I’m not sure it really adds anything that wasn’t already in the game. Looking forward to racing the other way before jumping to any major conclusions.

I did just add my vote to the forum discussion!

It would be easier and better to build a velodrome for zwift. Yes, this route makes no sense.

It wouldn’t be easier: building a velodrome would require the creation of entirely new assets. Crit City has a lot of assets that are just repurposed from other worlds.

Better? That’s somewhat subjective. Many Zwifters want a velodrome, but without the ability to steer, will a velodrome be much fun?

Crit City has a totally different feel in races than any other Zwift course. I think it’s a wonderful addition. And hopefully, someday we’ll get a fun velodrome as well!