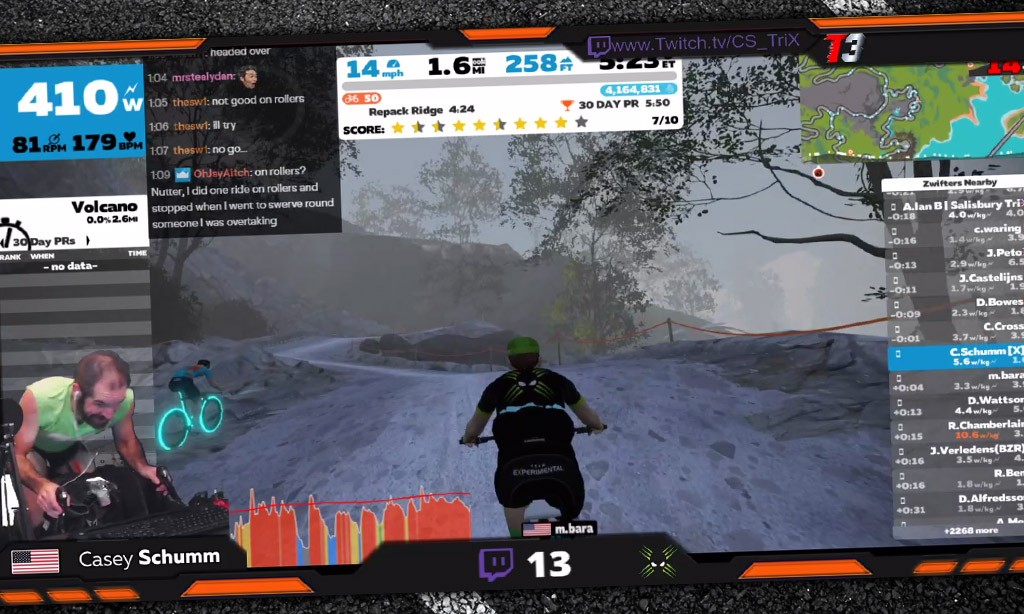 Watch him work his magic:

With this effort, Casey grabbed the Strava KOM for the Repack Ridge segment. I asked Casey how he did it–after all, I’m riding in the Repack Redux races and I need all the help I can get! Here’s what he had to say…

I think I made most of the extra time on that fast flat/board corner at about 1:20 and saving a lot of power to get up the climb.

This was only my 4th time down the path and I bumped trainer difficulty up to 100% to really feel the hills. It helped me really attack the steep parts with a strong trainer fighting back.

Here are Casey’s Strava times for the Repack Ridge segment–you can see his KOM attempt’s average power was only 12 watts higher than another effort that was over a minute slower. This shows the importance of applying power at the right time, and picking good lines so you don’t get slowed down by running off the trail.

Mountain bikers know better than anyone how important it is to hit the power at the right time to keep your speed up while conserving energy.

If you watch Casey’s video you’ll see many examples of him doing exactly this, usually when the road gets steep and he ups his wattage as the resistance increases. Since he had trainer difficulty set to 100% he felt those gradient changes, which helped him naturally respond with higher wattage when needed.

But you also need to pay attention to what’s going on in the game, because there is at least one corner where automatic braking kicks in (for realism, I assume). When that happens (around the 2:40 mark), it drops Casey from 25mph to 14mph instantaneously. Casey responds by hitting the power to accelerate back up to cruising speed quickly.

What about you? Have you figured out some tricks to fast times on Repack Ridge? Share them below!