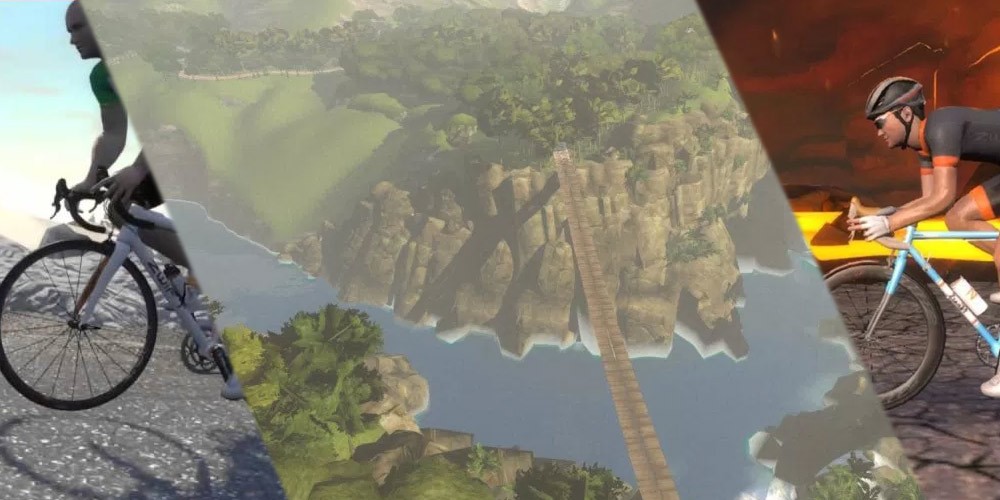 Watopia’s “Big Loop” was added with the Mayan jungle expansion in late October 2017. It includes the Epic KOM, Mayan jungle roads, and a portion of the Volcano Flat route.

We begin with a short, flat lead-in to the route’s biggest climb: the Epic KOM. At 9.4km long and 3.9% average grade, this climb will split any race apart.

Enjoy the descent after the KOM banner–it’s a great time to supertuck. Then hang a left toward the Jungle Circuit. Savvy racers might consider swapping bikes once they hit the dirt since a mountain bike is much faster than a road bike on the Jungle Circuit. But you’ll want to practice that swapping, because you’ll need to change back to the road bike after the loop through the Jungle, and those are precious seconds lost as you fumble to change bikes!

After climbing out of the Jungle you’ll descend towards Watopia, going through the fishing village then Italian Villas before heading around the volcano and into downtown Watopia for the finish.

Has this route been changed recently? I did the TdZ Group Ride yesterday and got the “Big Loop” badge, but apparently it was not enough to match the Strava segment nor have it listed in Veloviewer Route Hunter…

The TdZ event has this at both 42.6 and 42.7km and looks like it starts slightly earlier in the loop looking at the map in the event (I’m using Zwift Companion for this).
The Watopia start pens do appear to be after the start/finish banner for a clockwise loop though.
I’m happy as long as I get the badge and associated XP. Looks like the strava segment does not apply events on this route. I will have to ride it solo at a later date to complete Route Hunter though.