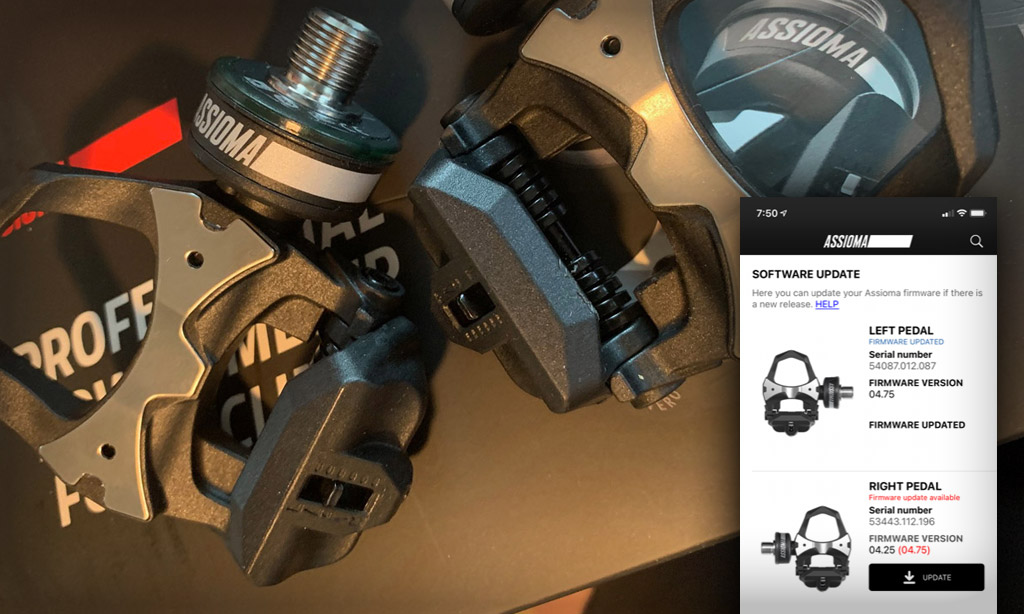 While I’m a big fan of the Assioma (see my complete review here) due to its accuracy, reliability, and pricing, there is one place where the Garmin Vector pedals had a leg up on Assioma: Vectors can be set to auto-calibrate. Auto calibration is the direction power meters and smart trainers are heading, because there’s really no downside! It helps ensure consistently accurate power numbers and removes one more task from our pre-ride checklist.

I installed the new firmware today, then took the pedals for a spin, dual-recording with my Wahoo KICKR 5 trainer. The resulting power comparison can be seen here on ZwiftPower, with the Assioma pedals averaging just .33% more watts than the KICKR 5. Nice!

Here’s Shane Miller’s take on firmware update, including an explanation of just how the auto-zeroing works:

The firmware update is easy to install via the Assioma mobile app. Once it’s installed, auto-calibration is enabled and you can simply ride without worrying about calibrating. Here are steps on the iOS app:

And here’s a support page from Favero if you need help updating your firmware.

With auto-calibration in place, the Favero’s Assioma pedals are head and shoulders above the competition. Priced at just $720US compared to Garmin Vector 3’s $1000US, the Assioma has features which meet or beat Garmin’s at a significant discount on cost.

My take: Garmin needs to step up their game by reducing pricing or boosting features if they want to remain competitive in the pedal space.

Looking to buy some power meter pedals? I can’t recommend the Assioma platform highly enough! They can be purchased direct from Favero (based in Italy) or at these Zwift Insider affiliate partners:

Interesting in the big difference on peak power though?

Yeah, I don’t put much stock in the peak power numbers, since they’re just one instantaneous reading. It seems like a lot in the example I linked above, but when you’re actually sprinting, the differences are generally quite minimal.

Does the firmware work for bePro pedals too?

I doubt it, but I don’t have any bePro pedals to confirm…

No, that is a totally different hw (only the outer plastic is similar) and has different fw… btw , that is one of the worst powermeter on the market, the absolute opposite of the Assiomas, a nigthmare, overmeasure the power heaviliy, not consistent… better to sell it 🙂

Does this mean I can just hop on the bike and ride now? No more spinning the pedals backward and leaving the crank at the 12 and 6 position while holding the bike upright?

FWIW, the price difference doesn’t exist in the UK. I bought the Garmin Vector 3’s because they were the same price as the Favero’s Assioma and had the cycling dynamics (at the time the Favero didn’t). Admittedly if I was buying today, I’d get the Assiomas – but I still think the Garmins look better.

The Vectors look better. That really is the only advantage they have over the Assiomas.

I’m a big Assioma fan as well – so reliable, incredible battery life and such an attractive compact design. Seamless firmware upgrade too. Although they are £700 / $975 here in the UK

There is no comparison as Favero Assioma pedals are the best given price and accuracy. I would not part with mine. Longevity if accurate according to estimates given by Favero makes these a 10 year or better pedal. That is less than $70 per year for ownership. If you have not tried power meter pedals to date, get a set of these and mainly the Duo and never look back.

Quite a claim. DCRainmaker doesn’t seem to think they are more accurate than the Vectors, which at last check he still used as his daily pedal when not testing other things. He also notes, accurately, that the Vectors look much better than the pod on the Assiomas. There is also no reason to believe that the Assiomas will last longer thanthe Vectors. None of this is to say the Assiomas aren’t great, just that a blanket statement that they are the “best” is absurd, even when taking cost into account.

Does this resolve sticky watts?

No, this wouldn’t affect sticky watts at all.

Has your Kickr 5 had the latest firmware update? There was an issue of the power overreading reported by DC Rainmaker. The new update sort out the problem.

Yes, it does have the latest firmware. (The power overreading only occurred at very low flywheel speeds, too, which didn’t happen in my ride at all.)

I installed the new firmware and had one second outages every minute or so on my Zwift ride today. I have Assiomas for over a year and this never happened before. They are fully charged. Does anyone have the same problem?

I am having exactly the same issue. Not great on today’s climb in the Haute Route stage… I am connected to an iPad, do you have the same setup? My garmin is also showing some outages though, so seems to be a pedal issue…

Did anyone noticed a change in powerreading since the FW upgrade? Mine are reading +3% and I saw some other people with minus reading. that’s strange because Favero didn’t speak about changes in the powermeter aspect

after the firmware, the accuracy deteriorated. approximately from +1% to -3%. It’s strange. Comparison with wahoo core.

The pedals are great. Wish Assioma would measure PCO. Is that even possible with these pedals or has Favero not activated that feature?

Bought a pari of Assioma DUO this week and made the Firmware update immediately. Pedals wok OK but then I tried to charge them for the first time and while the right pedal did charge 100%, the left pedal is not charging. The 4 LEDS are ON for every 3 seconds their intensity goes up and then down again … I tried several USB chargers without any success. Well well well …

Thanks for this Eric. Ive had major problems with these meters, so hopefully a re-boot will sort it out….