How To Run Zwift on Linux 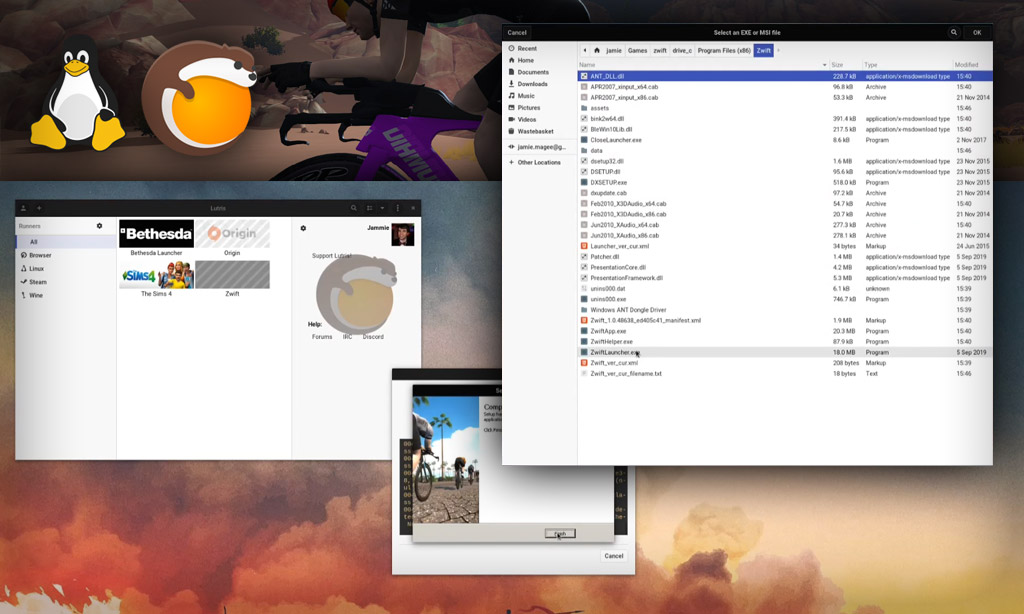 Getting Zwift to run on Linux was a journey I started just over a year ago. I didn’t get very far with my effort, but since then a lot of progress has been made by the Wine developers and others in the community, and Zwift is now (mostly) playable on Linux. I’ll admit there are some workarounds required, like having to use the Zwift Companion app to connect sensors. But on the whole, it works well. So I wanted to summarise the process for anyone who wants to try it for themselves.

I’m using Lutris, a gaming client for Linux, to script out all the steps needed to make games playable on Linux. If you’ve never used it before, I’d really recommend it for gaming on Linux in general. First things first, you’re going to have to download and install Lutris for your Linux distribution. Thankfully Lutris has a great help page explaining how to do this for most distributions.

This might take a while, and depending on your Internet speed could be anywhere from 10 minutes to around an hour.

Once the Zwift launcher has finished downloading and updating, we’ve hit the first hurdle that can’t be scripted with Lutris.

The launcher will appear as a blank white window. Actually, the launcher is displaying a web page, but Wine can’t render properly. Thankfully all the files are already downloaded, so all you need to do is quit the launcher window, and exit Zwift from the Wine system menu. After that, the Lutris installer should complete.

Zwift requires the Launcher to be running all the time while in-game. However, Lutris only allows 1 application to launch from the “Play” button. So before you hit the play button, first you need to click “Run EXE inside wine prefix” and browse to drive_c\Program Files (x86)\Zwift\ZwiftLauncher. You should see that familiar blank white screen.

Finally, you can hit the “Play” button and Ride On 👍 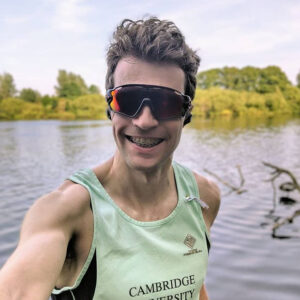 Jamie is an avid triathlete and all-round geek. When he's not swimming, cycling, or running you'll find him tinkering with some code.

I really enjoy linux and its many varints on the Raspberry Pi.
Im hoping zwift finds its way to nvidia shields sometime soon.

Thanks for sharing it, I have a laptop with Ubuntu installed and really wanna stop using my iphone to run zwfit. Did you know how many devices can be paired using companion app?

I just read a similar how to on slowtwitch the other day. Any chance that was written by the same person?

Thanks a lot for this!

One issue on my side with zwift on linux: my pc gets very hot. So hot that I have to stop after 5 minutes otherwise I fear that something gets damaged. Spec wise it should not be an issue. Any idea what might be the problem?

Could be your cooling fan has conked out.

I have been using Zwift on Debian via Wine since the start of lockdown. I have to type 3 commands across 2 terminals to get it to run but have no other issues. I seem to have less problems than those trying to us it with Apple products.
The only thing that frustrates me is when you save you have to re-launch whereas Windows takes you back to that webpage which Wine can’t render.
I pair 3 things with the companion App and have no issues with an overheating laptop.
Oh, USB support in Wine would be great…

Nicely done! What’s your hardware setup and what sort of frame rates are you getting?

We need to get Zwift on Stadia or any other streaming gaming platform. Then we will get rid of Wine and all the portability problems we face in Linux with games. I wish this could be an option.

Obvious question…. Why what ? Zwift on Linux, thought that might be easy to comprehend (it’s a widely used platform in the tech, VFX and graphics world, becoming more popular in the end-user gaming one) – so something else more specific ?

That’s a fantastic Howto, Thanks for sharing this !

Why go thru all that ballache, for no gain at all?

Because some of us don’t use windows or mac, so it is actually a “gain” of being able to zwift over not being able to.

Is there any way to pair ant+ sensors via the companion app? I’m having no luck (using android phone).

Hey, thanks for putting together the how-to. I’ve got Lutris installed and the Zwift install seems to have worked but after clicking ‘Run EXE inside wine prefix’ and getting the blank screen, I click ‘Play’ and get ‘zwiftapp.exe is not responding’ before it dies. Any ideas on how to troubleshoot? I’m unfamiliar with Lutris and Wine so any tips on where to find logs or anything else to try is appreciated!

Seem to have found the answer here, export MESA_GL_VERSION_OVERRIDE=3.1 in the terminal, then launch lutris from the same terminal and do the whole launch from wine then play thing. I’ve got integrated graphics, along the lines of what the forum poster mentioned.

Maybe someone can help me with this. Try to install Zwift from Lutris but when update page prompt its seem it cannot get internet connection? I try a another method with Wine and the same problem. Maybe I miss something in procedure?

Thanks for this amazing tutorial! Works fine by me, is there a way to avoid typing my zwift password everytime I launch it?

Has this broken with the latest update from zwift?

How can I get it to work now. Where can i find the draft installer?

The exact error message i get is:
ZwiftLauncher.exe
To run this application you first must install one of the following versions of the .Net Framework
v4.0.30319
Contact your application publisher….

the draft installer is on the lutris site

See if you can get an old version of Zwift installer, which has the ZwiftLauncher.exe dated 5/Sep/2019. Just use that and let Zwift normally update the game components through that package.

I went back to the original ZwiftLauncher.exe dated 5/Sep/2019, and everything started working again.. Have archived an old copy of the install package for if/when this happens again..

Hello, can you précise your solution plz ? thx

ok I fixed that by changing the wine version but now I have another problem with javascript: fixme:msctf:InputProcessorProfileMgr_GetActiveProfile

What version did you change to? Stuck with same issue.

all good finally but it can’t find my hammer 🙁

As I understand it, you have to use the companion app on your phone to sync with sensors since Bluetooth support in Wine is currently pretty weak.

While running Zwift this way works well for me, stopping the game after a ride causes some Wine error and I have to kill the process. Is there any way to get a clean shut-down as well?

Hi,
I followed all the instructions till “Finally, you can hit the “Play” button and Ride On 👍”
my machine gets me out this error: RunFromProcess/ Cannot find the specified process

were you able to solve?