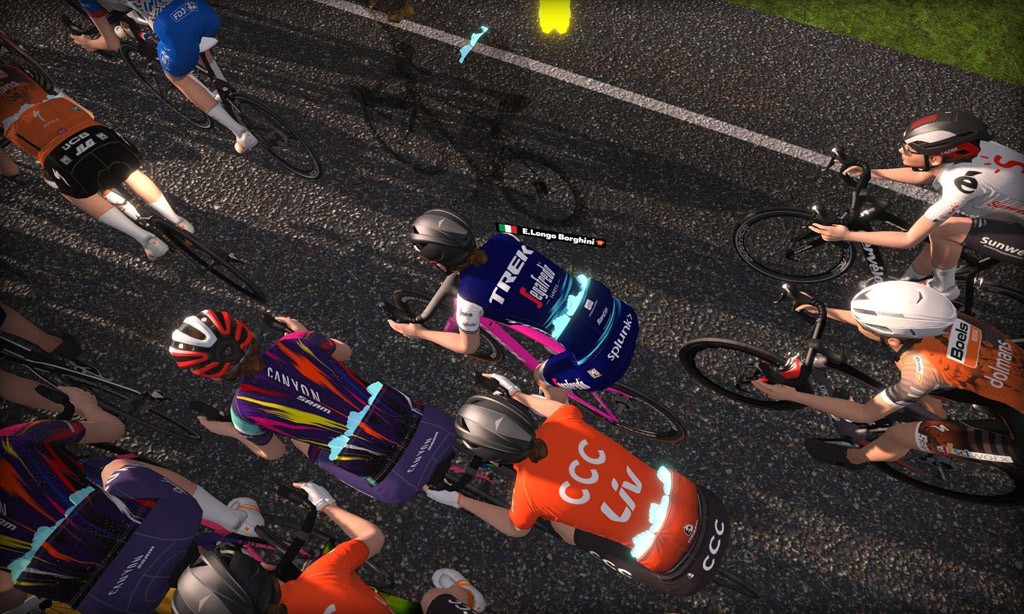 The first race of the first-ever Virtual Tour de France race saw 16 pro women’s teams taking on 4 laps of Watopia’s Hilly Reverse Route. This punchy 9.7km route doesn’t leave much time for resting with its rollers, sprint segment, and QOM climb. It becomes a race of attrition, with the front group slowly reducing in size all the way until the top of the final QOM effort.

Winning here requires you to be strong enough to hold on up the climb, with the power to sprint to the line against a small selection of riders. And it helps to have precise timing with a helpful powerup for the finish!

Here’s our complete race writeup for the women’s first stage. You may also watch the full broadcast on YouTube, or view the short highlight video below (includes women’s and men’s races):

With 16 women’s teams in the race each bringing 4 riders to the start pens, our starting field was 64 strong. But that group was quickly whittled down to ~30 riders before the pack hit the first QOM!

We didn’t get to see the first 3-1/2 minutes of the race, but obviously some riders were pushing the pace hard. This is a Zwift race, after all, and experienced Zwifters know that pushing the pace for the first few minutes reduces the pack of contenders quickly.

Reminder: the Virtual Tour de France is a team points race, so it is important to keep track of how teams were using their riders in order to take leaders jerseys.

Elisa Longo Borghini (Trek-Segafredo) attacked long into the sprint section on the first lap, easily winning the first points of the first vTdF. (She would do the same on the second and third lap, and go on to win the “Most Combative” jersey for stage 1).

Then it was a bit of recovery over the cobbles of the Italian Villas before riders hit the reverse hilly QOM. Joscelin Lowden (Drops) took the first QOM, and would go on to take it on laps two and three as well.

The pack of riders was slowly being reduced as the laps wore on, but two teams (Canyon/SRAM and CCC-Liv) managed to keep four riders in the front pack until the final lap. This is a hugely important piece of the points strategy, as the top 25 riders crossing the finish line earned points (as well as the top 10 on sprints, and top 3 on the Hilly QOM). And while both of these teams kept 4 riders in the front pack, it was Canyon/SRAM who got more of their riders over the line in front, winning significantly more points than CCC-Liv.

With one lap go, ~24 riders were still in contention in the front pack. Borghini didn’t go long on the final sprint, leaving it open for Chantal Blaak (Boels Dolmans) to take the fourth sprint. Blaak followed her sprint win with a nice attack with the cloaking powerup near the end of the final QOM. She managed to create a small gap, but was soon reeled in by Erica Magnaldi (Ceratizit-WNT), who had been chasing the QOM win all race.

Magdalin was then leapfrogged by Lowden, and it looked like Lowden had the QOM in bag once again! But Magnaldi put in a massive final dig, beating Lowden over the line and taking her first QOM on the day.

Riders attempted to supertuck on the QOM descent, but this is a touchy proposition with such a short descent and a flat section in the middle. A small selection of 8 riders was together at the front as they descended through the flamme rouge (1km to go) banner, but they played a bit of cat and mouse heading into the finish. This allowed a group of 5 to catch just as the final sprint began, but none of those 5 had the legs to contest it to the line.

The finishing sprint was a lesson in powerup timing. Reigning TT World Champ Chloe Dygert (Twenty20) went first, popping an aero powerup and powering off the front. April Tacey activated her powerup just a few seconds later, and flew past Dygert as her powerup ran out. Chantal Blaak popped her aero powerup too late, missing out on the chance for a bit more boost.

Kristen Faulkner (Tibco-Silicon Valley Bank), meanwhile, didn’t have a powerup to use. All she had were her legs – and that’s the most important part! April Tacey was first to the line, taking a well-timed win in this first stage of the women’s Virtual Tour de France.

See results on ZwiftPower (note: not all riders registered)

Got questions or comments? Suggestions on how we can best summarize these races in a useful way? Share below!

Where are the full results? I really liked this, and I’m very impressed at how much better it is to watch racing on Zwift now compared to only a year ago. The one thing that truly bugs me is that they don’t display the full results anywhere. It’s bad enough that the TV coverage is appallingly poor in this area, but that the full results are not even available on the letour.fr site is just terrible, and unfortunately a strong hint that they don’t take the results seriously. The “results” are in fact a picture(!) of the top three in… Read more »

I couldn’t agree more. Without the results and real time updates within the broadcast, these are really just one-off exhibitions. This seems like it wouldn’t be too hard to add. The could have had an intern make a results page in a day if they cared about it.

Looking forward to your write up about stage 2 as Zwift Academy winner Ella Harris feels the super tuck algorithm cost her a chance at victory. Hope you can talk with Zwift, maybe her, and analyze it. Perhaps a “How the race was lost” deep analysis if warranted on the ins and outs of the super tuck in racing. If you compare Ella and winner Lauren in a Strava Flyby you can see she’s with them at the top but quickly drops off. Could it be related to the tweaks they did to drafting for the Virtual Tour?

It was an incredible race to watch! Plus, gives me hope to know that even the pros struggle with timing their powerups.