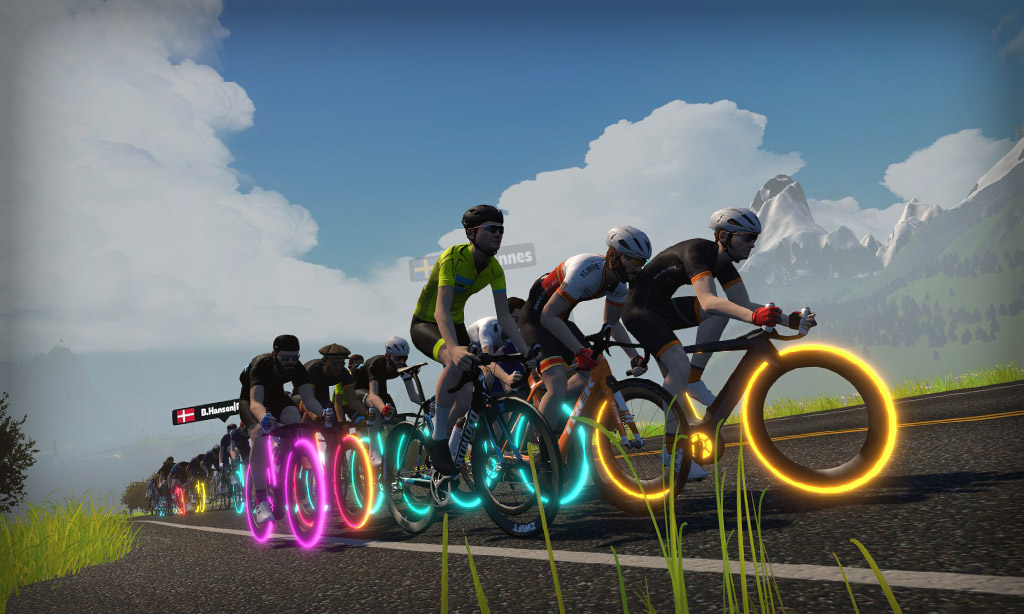 After the mishap of the previous week’s Zwift Hill Climb Battle and being impacted by the dreaded “power dropout” I was back again, with a point to prove to myself.  It was “Redemption Monday”.  That is the beauty of Zwift: you don’t ever have to wait long to banish the memories of a bad race. Just another reason why I am such a fan of this platform!

The route today was an assault up the Epic KOM, in reverse, with the customary finish at the Radio tower.  This route was shorter in distance, only 12.1km, but steeper.

As usual, there was the frantic start from the pens and the jockeying for position and never settled as the bunch meandered its way to the base of the climb via the Ocean underpass.  The already faster than usual pace quickened over the bridge and the race was already on as we hit the fork in the road where you can go right into the jungle or left up the KOM.  As we turned left, the pack had splintered as the road began to rise.  A relentless start after only a few kilometers of racing!

With no connection issues to hamper me, I was able to quickly settle down and began to find my rhythm, surprising, tapping out a pace equating to 5.2 watts per kilo.  This was somewhat of a shock and didn’t think it would last long, but I stayed with it.

The beauty of climbing the reverse side of the Epic KOM are the switchbacks. They keep the ride manageable and enable you to focus on each part of the climb.  Several days earlier, I had taken part in the Zwift Academy Race up to Chalet Reynard, on the Mount Ven-Top.  I had only raced the route twice before because the long uphill sections just seem never-ending and are no fun.  In contrast, the switchbacks on the Epic KOM keep the racing entertaining and it was here that I was able to overtake two riders who had danced away from me on the early part of the climb.

Gaining Ground In the Zone

Now mid-way up the climb, I was still pushing a shocking 5.2 watts per kilo and after overtaking several riders who had clearly gone out too hard I was now sat in a steady 7th position on the road with a solid gap of 10 seconds to the rider ahead of me.  Despite clearly being in the red zone in terms of heart rate, I hoped that if I was able to keep this tempo, then perhaps I could gain a place up the steeper Radio tower.

Whatever the outcome would be, at that precise moment I was climbing above my ability and started thinking perhaps I would get a new personal best for my 20-minute power output, or reach the magic 5 watts per kilo number? As I climbed, it almost felt like I was in a trance, like the type of daze you can enter when time trialing, when you are right on your limit, and where you are pushing hard enough to be in real discomfort, but not too hard that it is not sustainable – almost the worst kind of suffering.  I pushed on.

After the final hairpin, a French rider pulled alongside me and as the road leveled and I took the opportunity to sit behind them, to get whatever draft I could and any respite before the final assault up the Radio tower.  In my daze I had lost track of the race behind me. “Where did they come from?”

The rest from the draft was short-lived as the climb to the Radio tower began.  The 1.2km to the summit has to be one of, if not the toughest and steepest roads in Watopia.  To put it simply, it’s a grind.  Thinking of the long game, I slipped down a gear and began to spin my way up the climb, trying to keep a cadence of over 80 rpm.  That’s the thing with cycling, the “road always reveals” and my attempts at spinning probably only took me three-quarters the way up the climb before my cadence dropped off and I was grinding at 65 rpm.

I had failed to make any gains to the rider who was 10s ahead of me at the start of the climb, however with 200 meters to go, I was sitting in a solid 7th now 10 seconds ahead of the French rider who I had started the Radio tower assault with.  It was now a case of just “finish the job” so I was out of the saddle trying to keep momentum as my legs faded and I could only push the pedals at 65 rpm.  That last exhausting, lung busting push felt like it would never end!

An epic climb up the Epic KOM!  It transpired that I finished 1 minute behind Bartek Pawelczak, a Polish Olympic rower who won a silver medal in lightweight coxless four at the 2008 Summer Olympics – he took 3rd place.  This highlighted one of the great things about Zwift – I was pitting myself against a former Olympian and coming only 1 minute down is respectable. The winner was Marshall Wu, a former Road Cycling Tour of Shanghai champion from 2013-2016, in a time of 25.42.

Granted I didn’t win, but against a strong field, I was happy with my 20-minute PB and how I had ridden, sustaining a solid effort.  I put the success of the race down to pacing.  Key for me was finding a rhythm early on in the climb, one that was hard, yet sustainable.  Redemption achieved, on to the next race!

Have you ever been “in the zone” on Zwift? When was the last time you had a “breakthrough” ride? Share your story below!

That was a great write-up. Congratulations on the strong performance, and thank you for sharing your story.

Thank you for your feedback, the Zwift Hill Climb Battle is a brilliant race and I certainly recommend giving it a go because it actually contains many races within one. There is the race for position on the road, then where you come in your category, then for example the Mountain segment, if you race the normal Epic KOM route and then there is your 20 minute power to target. Simply an excellent, well thought out race.

Thank you for your reply, Tim! That sounds very interesting. Is there some sort of guide on the different series that are available? I’ve found that to be quite confusing.

Hi Renzo, if you have joined up to Zwift Power, there is an option there to see the different series. Below is a link to the Hill Climb Battles.

Thank you, Tim! I am on ZP, so I’ll check that one out. I’d seen the series and have raced on the 3R races with some frequency, but I’ll check out the HCB!

Whoop, congrats on the new 20-min PB, and on not getting any dropouts! 😁
I guess my last breakthrough ride was tonight as a 2-lap race on Harrogate UCI course promoted me to Cat-C on ZP, but it didn’t feel like an “in the zone” ride…I survived though, so yay me 👍

Congratulations on your promotion to Cat-C on ZP. A race like the Zwift Hill Climb Battle certainly helps build endurance and worth a try, at least once. The Harrogate you raced is a challenge, so a good result getting a 20-min PB as there are plenty of ups and downs on the course, making it quite a “lung buster”. ﻿👍﻿

Can I ask you what trainer difficulty you had set for this race? I’m always trying to be a purist, but I noticed that the Radio Tower climb is simply too much at 100% after already having climbed for 20 minutes.

Hi, thanks for the feedback. I have my trainer difficulty set to 100%. I want it to be as close to cycling outdoors as possible. I understand what you mean about the Radio tower, there are two ways to think about this. The first way is that you can hold a little bit back for it during the main assault up the climb, meaning you are overall potentially going to be slower or the second way is just accept that the last bit up the Radio tower is going to be torture as you are going to right on the… Read more »