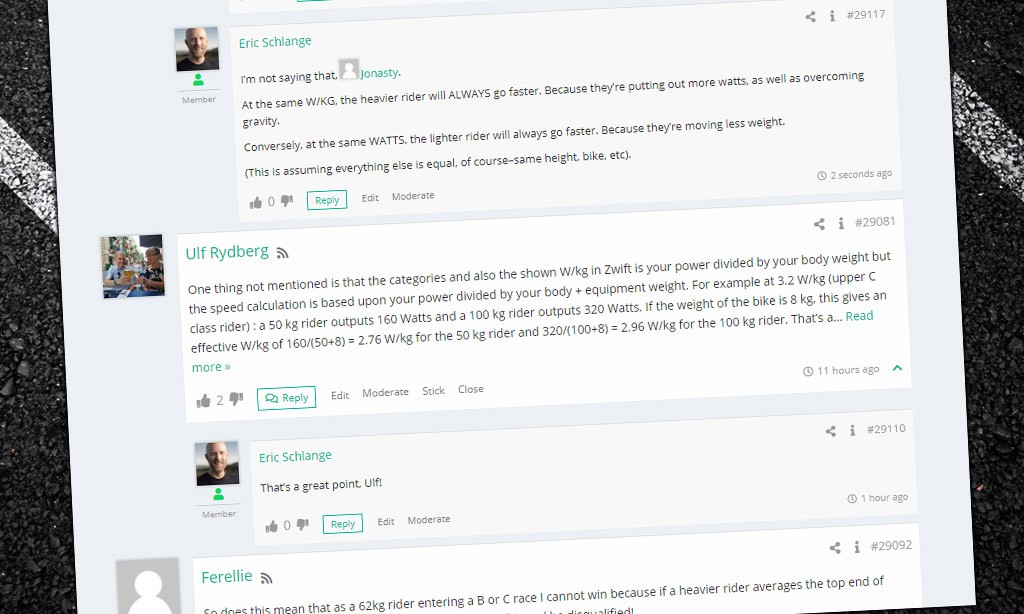 This isn’t an exciting post about Zwift, but it’s worth mentioning since it affects the Zwift Insider site in a big way.

Around two weeks ago, we moved to an improved commenting system for Zwift Insider posts.

For the nerds who want to know: our old system used Jetpack, which was an improvement over WordPress’ rather weak built-in system. But it was still far from ideal, with the most annoying problem being that visitors would attempt to reply to a particular comment, but end up commenting on the main post.

Our new system uses wpDiscuz, and we’re pretty stoked on its features and functionality. Some of the upgrades wpDiscuz delivers are:

We’ve already seen an uptick in user comments since the rollout, and have received only positive feedback from visitors. This is a big win in our book, because it’s the community’s comments that really make our posts come to life. And it’s your feedback and questions that help us choose which posts to write next!

So thanks, everyone, for joining in the discussion. Write on!

This is pretty sweet!

Did notice this recently, and like the improvement.
Being able to subscribe is a lot better than the other versions’ version of it (here, it’s a simple button)

And now I can comment from work, this is not blocked.

Hay that is my screen shot.

Nice!
Thank you for using wpDiscuz!
Just a great news for you. wpDiscuz has released a new major version. wpDiscuz 7 is ready. You can try it here: https://beta.wpdiscuz.com/

I saw a recent blog post from a Zwifter that had completed all of the achievements and routes, both running and cycling. He included screen shots of the completed pages from his profile. Does anyone know where that post is? I can’t find it now.