It’s with great pleasure that we are able to confirm the dates and plans for the first UCI Cycling Esports World Championships. The year has certainly been a challenging one for all, but we are now back to enjoying racing and have a new UCI World Championships to look forward to at the end of 2020.

Virtual races were hugely popular during the period that competitions ceased, and I truly believe in the potential of esports to help grow participation in our sport. This is a historic moment.

Almost a year ago it was announced that Zwift would be hosting the first-ever UCI Cycling Esports World Championships for 2020. It’s been a crazy year, though, and with all the UCI calendar juggling and COVID restrictions, there was uncertainty about whether the event would actually happen.

But today it was announced that the UCI Cycling Esports World Championships will be held on Zwift December 8-9, 2020. This is especially good news considering the continued uncertainty surrounding the 2020 UCI Road World Championships – the races were scheduled to take place in Switzerland on September 20th, but the Swiss Federal Council has banned events uniting more than 1000 people through September 30, so an alternative venue is being sought.

There are still some key details being worked out for the inaugural Esports World Championships, but let’s dig into what we do know.

Riders will compete remotely from their own homes or training bases, much like we saw in the Virtual Tour de France.

Race winners will be determined simply by “first over the line” instead of the points systems we’ve seen in recent pro races.

The UCI will be inviting national cycling federations to take part in the 2020 event. Similar to the UCI Road World Championships, national federations will be allocated a number of places determined by certain criteria including UCI Road Rankings as of June 2020, the number of riders in the anti-doping Registered Testing Pool and the number of eligible riders on the Zwift platform.

More detailed criteria will be released which ensures that all five continents are represented for both women and men and that the maximum possible number of entries for both genders will be the same.

Additional wildcard invitations may be awarded to individual riders by the UCI.

The World Champion’s rainbow jersey is a highly-prized bit of kit for any pro cyclist, and the Esports World Championships will maintain this tradition. Winners will be awarded a newly-designed rainbow jersey to wear within Zwift. Physical jerseys will also be given to winners to wear while participating in esports competitions for the following year.

Looking to the Future

2020 has been a big year for esports as it has helped fill the gap left by traditional sport. We look forward to establishing this as a new discipline of the sport – not one to plug gaps, but one that’s truly complementary to other disciplines, whether that be road, cyclo-cross or mountain bike. There’s a huge opportunity to grow the sport with esports and I’m proud that together with the UCI, we are able to lead the way.

Clearly, Min is bullish on the future of Zwift and esports. He always has been! This year has seen Zwift racing make huge strides forward – the massive influx of pro riders on the platform, the Virtual Tour de France, and now the Esports Worlds have all brought Zwift closer to a realization of Min’s vision.

But we’re still in the early days, and there is much progress to be made. Min has his sights set on Zwift as an Olympic Esport even as Zwift takes over ZwiftPower, anti-sandbagging controls begin rolling out, and the eracing rules and hardware standards continue to evolve. It’s going to be an exciting winter!

Hope this will bring new routes on watopia. Its been a lot of time since the desert expansion

So it means, this events will be for “pro” riders only ? Like the Virtual TdF… No chance to see a guy/girl from the community win this ?

Pretty much. Depends on how the country allows people to qualify for the national races and/or national rankings. They are doing full anti-doping controls. This one is for the pros.

We could start just our own “Pro” circuit for amateurs.﻿ 😊 ﻿

My hope is that the national federations put forward the best riders possible, and that should mean a number of community riders. I fear not though…

If they do that then Achim Mueller will just dominate the race because he is such an apex predator/genetic freak/beast. Tongue firmly in cheek :p

Haha! you would ‘die’ if you know who i really am!! 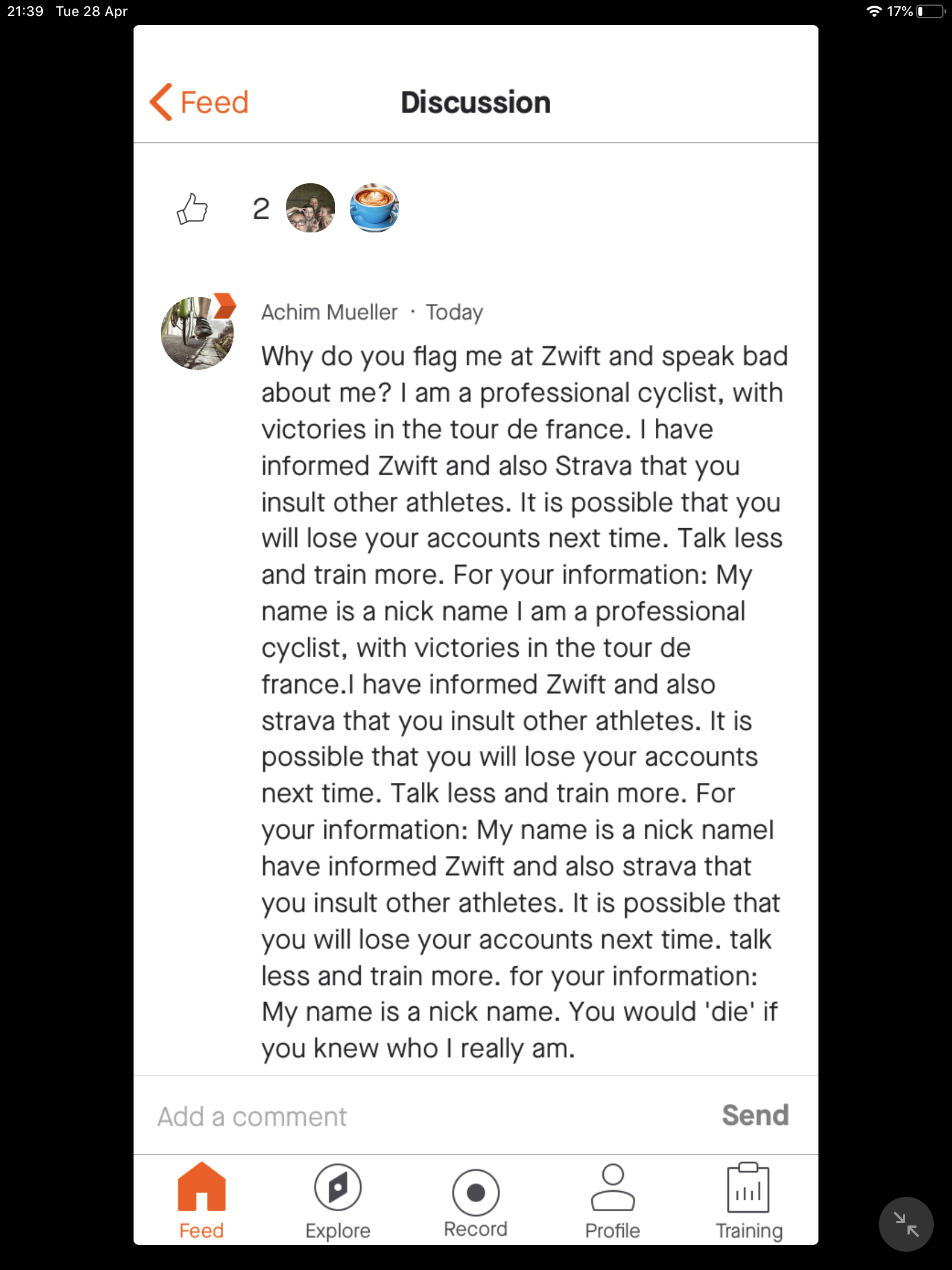 Hope for us new Watopia routes with this event, they have over 3 months to manage it.

Whilst Zwift are continuing to build relationships with cyclings major organisations UCI, ASO etc. which is fantastic for raising the platforms profile, It appears to me that they are starting to lose focus on their core client base…. the paying customer! Although I don’t know the numbers, I would guess the vast majority of subscribers are on Zwift for training purposes and social/club meet up rides and have never raced or watched Zwift racing. I, for one, tuned in to one of the Virtual TDF races and found it soooo boring! I found the ‘Handicap’ race with Chris Froome chasing… Read more »

certified A + pilots should participate together and kick-start the pro tour!

Community run nationals is of course still entirely possible. I wouldn’t want to land the burden on one team to run it but why not?

I was really hoping they were going to do this in Grand Theft Auto instead of Zwift.

Are zwift riders in the invitational events actually being drug/doping tested, cause it’s kinda important that the ones who may take part in this are clean.

Yes, I presume this event is treated the same as any IRL world championships with respect to anti-doping (with whatever modifications there may be for the time being because of the pandemonium). The UCI press release even explicitly cites “the number of riders registered in a Registered Testing Pool” (ie athletes subject to regular out-of-competition testing) as one of the criteria determining the quotas for national federation.

I’m excited about this. But a little disappointed to hear it’s going to be remote. Yes that makes some sense (for obvious reasons), but you’re bringing in variables like internet latency and reliability and trainer/power meter variations that already causes skewed races.

Would be the perfect opportunity to make this a stadium event that Zwift is wanting….

Anyway, exciting and hopefully they can do something about the ‘luck’ of getting a good power up(s) and make it more about the skill of using the power ups

Plenty of zwift D graders would be competitive in that field…

Would be nice if they at least fix the visual glitches, so that the rider crossing the line first will also be the actual world champion, lol.

On a serious note: this visual ‘lag’ is really upsetting when watching the races and especially (close) finishes. Together with the erratic time gaps, it makes the races much harder to follow than strictly would be needed. Also weird camera angles etc. do not help, show us a sprint using clear helicopter views or ‘side views’ (e.g. the Champs-Elysees Tour de France side sprint camera).

After the application of typical cycling federation rules in the last UK championship, who would want to place themselves under the governance of arbitrary bureaucrats that make up federations?
The attraction of Zwift is the absence of politics. Just have a age group world championship series that gives everyone the chance of earning a spot in the race with anti sandbagging controls in play.

“All five continents”, which one is missing out? I can see a country from all six (not counting Antarctica…)

How the Race Was Won: PowerUp-Inspired Crit City Attacks

Notable Zwift Events for the Weekend of December 3-5

The View From the Back: the New ZRacing Chase Race

How the Race Was Won: PowerUp-Inspired Crit City Attacks

Notable Zwift Events for the Weekend of December 3-5