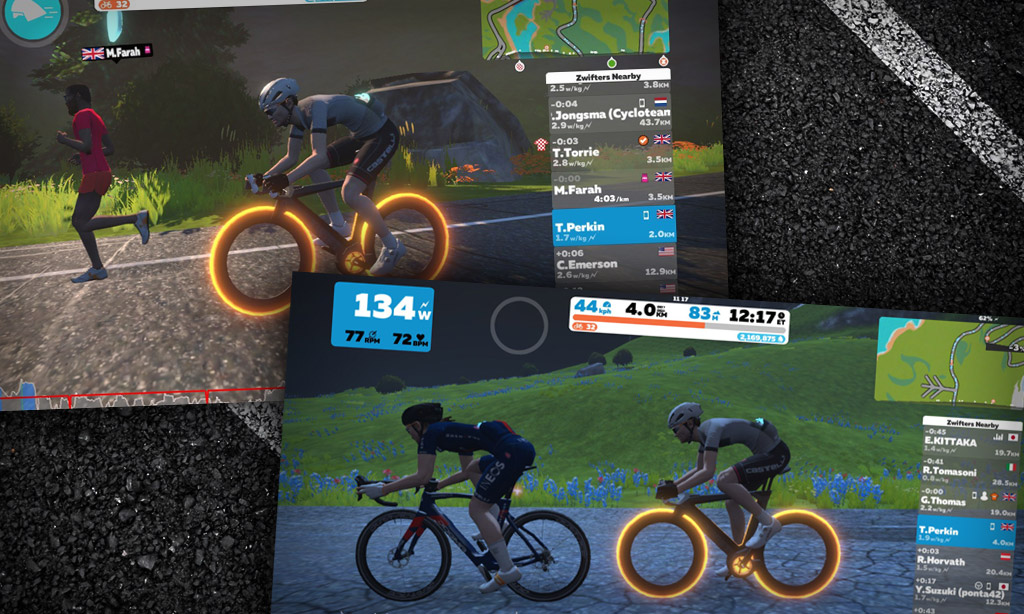 Zwift is the gift that keeps on giving.

If you are reading this, chances are I am preaching to the converted. But I feel I need to confess.  You see, I am constantly finding things that keep me returning, day after day, hour after hour to the platform.  To put it simply, I’m addicted.  There we go, I’ve admitted it, “I’m addicted to Zwift.”

But, I’m not the only one addicted. Every time I enter Watopia, I am joined by fellow riders and runners who are finding themselves happily returning to the platform day after day.

The reason for this addiction is that there is always some event going on, some race, some badge to collect, some PB to smash.  There is always a new experience to be had. And it’s for this reason why Zwift never gets boring.

Talking of new experiences, I was out cycling around Watopia and after several heavy days of racing, my legs were tired and in much need of a rest.  Normal people would forgo the ride and take a day off, but we Zwifters, we don’t do that.  We convince ourselves that an easy session is equivalent to a rest.  So, I was gently cycling around Watopia on my rest day and I was approaching a runner.  This was a little more unusual than normal as I was going up the Zwift KOM and I could see the pace of the runner being around the 4 min per km.

I quickly did the calculations and realised that this runner was running up hill in 40 minute 10km pace, which was quick.  I appreciated there might not be gradients with the treadmill, but the person was still running at 16kph.  Then I saw the runner’s name, ‘M. Farah’. Surely this wasn’t the legendary British runner Sir Mo Farah, the most successful British track athlete in modern Olympic Games history?  So what did I do?  I slowed and asked him.  I didn’t get a response, but to be fair, I didn’t really expect one given he was now running at 3.30 min per km, uphill.  I made sure I took a photo for posterity and off I cycled.

I later verified that this was the real Sir Mo Farah.  What a unique experience, as for a brief moment, I cycled alongside the Olympic champion, Sir Mo Farah.

The miserable British weather must be bringing all the star athletes to the Zwift platform, because the following day I was cycling the Jungle loop when right in front of me was British professional cyclist and 2018 Tour de France winner, Geraint Thomas (G).  He was easily recognisable with his Ineos Grenadiers kit and his Pinarello bike.  Conscious that just like me he was out for a morning ride, and not wanting to impose, I asked if I could join him. He obligingly and politely replied “Yes, but I am going slow” – that suited me because I was just doing an hour’s recovery ride and let’s be honest, I wouldn’t have stood a chance of keeping hold of his wheel under any other circumstances.

So for the next hour, I cycled with Tour de France champion and Olympic Gold medallist Geraint Thomas.  I did try and engage in a bit of conversation on a couple of occasions, opening with a question about the weather (a favourite topic for us Brits), but that got no response, which I completely respect.  Fundamentally, he was out for a morning ride and probably wanted to mind his own business. He was gracious enough to let me ride alongside him and I respected that by not bombarding him with messages.  What an absolute superstar.

As we left the Jungle, we continued up the reverse Epic KOM. I have previouly written how my favourite race is the ZWC Hill Climb Battle which goes up the Epic KOM, so it was pretty special to be riding up my favourite mountain climb with G.  What wasn’t lost on me either (which I stated to G, who is recovering from an injury sustained in the Giro D’Italia) was that I knew the effort recovery takes because I have been battling this never-ending journey to recover from cancer and it was 7 years to the day that I was first diagnosed. I have been fortunate and I appreciate special moments like today.  It was very kind of G, for letting me ride with him.

I always enjoy the reverse Epic KOM route, but I enjoyed it that much more today.  We cycled at a more relaxed 3 watts per kilo, as opposed to my usual lung busting 5. Like the day before with Sir Mo Farah, I was sure to take a photo of me alongside G as we cycled up the Epic KOM, as people would never believe me.  I also took one just as we crested the climb.

As we descended, we were soon joined by a couple of additional riders and before long, our small bunch was at the bottom of the climb. As we entered the outskirts of town, I sensed this was a good time to leave my ride with G.  I thanked him and he continued off up the road, minding his business as he went, an absolute gentleman, and I’ll repeat what I said earlier, a superstar.

Like I said, Zwift is the gift that keeps on giving – thank you G and Ride on!

I’m thinking Zwift needs something along the lines of Twitter’s blue tick.

aaaaaand I just found out they do. Every day’s a school day!

I cycled past Mo over the weekend, also. He was just going up the gravel climb after the land bridge when I saw him. I knew right away it was him since it was a ‘verified’ account. I gave him a ‘ride on’ and kept going. Great to see world-class runners using Zwift, though.

Lots of the top athletes and cyclists are using it. Check out my up coming article where I was fortunate to cycle with and interview Olympic Gold medalist and current World Record holder, Jonathan Edwards. Really interesting speaking with Jonathan and certainly worth reading, so keep an eye out for it.

Jonathan Edwards is the World Record Holder for the Triple Jump.

Hello, my name is David, I am a level 28 user and I have ridden 3630 miles since mid June. I Zwift six days a week. This is my first Zwift Anonymous meeting.

I don’t have a problem, I can quit whenever I like – I just don’t want to.

Nice article by the way.

Thanks for the feedback.

I once rode in watopia with the first North American to wear the TdF yellow jersey, Alex Stieda. He actually led in 5 classifications that day, but wore the yellow.

Months ago, March or April, I rode with Mark Cavendish and the Brit brothers Pro-racers who’s name escapes me right now, on the Volcano. You ask, “How did you know?” Because when they decided to hit it, their power went from 3.0w/kg to something like 6.5 in a flash. It was like they were shot from a cannon!

Were the two British brothers the Brownlees? Or was it Adam and Simon Yates? I like that expression that describes their acceleration.

Just a couple of days ago I was warming down in London after a race and Mark Cavendish and a group rode by, I did a few kms in the bunch as they were going slow. A nice way to warm down I thought.

In fact, it was Adam and Simon Yates. Thanks for the memory jog…

Nice and interesting read! I love the Zwift community and sometimes to meet a “Superstar” from Cycling, Running or Triathlon. That makes the experience count. Ride On! Looking forward to your next write up

Thanks for the review, please see my article which had been posted today where I interviewed Olympic Gold medalist Jonathan Edwards.

I did see a Paralympian on tempos fugitive yesterday morning: Corrine Hall.

I would really like to speak to a Paralympian to understand how the platform caters for people who have specific needs. It would really good to then feedback to Zwift so the platform can be made even more accessible. Everyone should have access to this. I was looking at what trainers are available for people in wheelchairs as for a time, I was in one. This should be an inclusive platform and would love to identify areas for improvement to help others access it. For example, what could be done for the visually impaired who need a screen close to… Read more »

I agree. But unfortunately, I think this would be a minority, and I’m not sure it would go anywhere. But fingers crossed 🙂 One way to move forward would be to look at all the Raspberry Pi project (usually free) out there. I’ve seen people doing crazy stuff with Zwift and a Pi to work around the product’s limitations (like rowing).

I always find it a little sad when people try and chat with the professionals on Zwift and especially Strava (Where they never get a reply) as these guys are just going about their job and don’t have time to reply to every meaningless comment as it would consume their ride.

That is an interesting and different take on things. I think one of positive things in Zwift is the community aspect, it’s up to the individual if they want to engage or not with fellow riders – and people will respect that and I am not just talking about professionals. A lot of professionals do engage and even host specific events, Tim Wellens and Caleb Ewan did one this week, for fun. Last week, Andy Schleck was in a huge group ride and it turned into a Q and A session, he was happily chatting away, so I think it’s… Read more »

Thank you for sharing your great story and much respect. Have a great 2021!

Thanks Franco, appreciate the feedback. Have a good 2021 👍