The Race That Broke Me 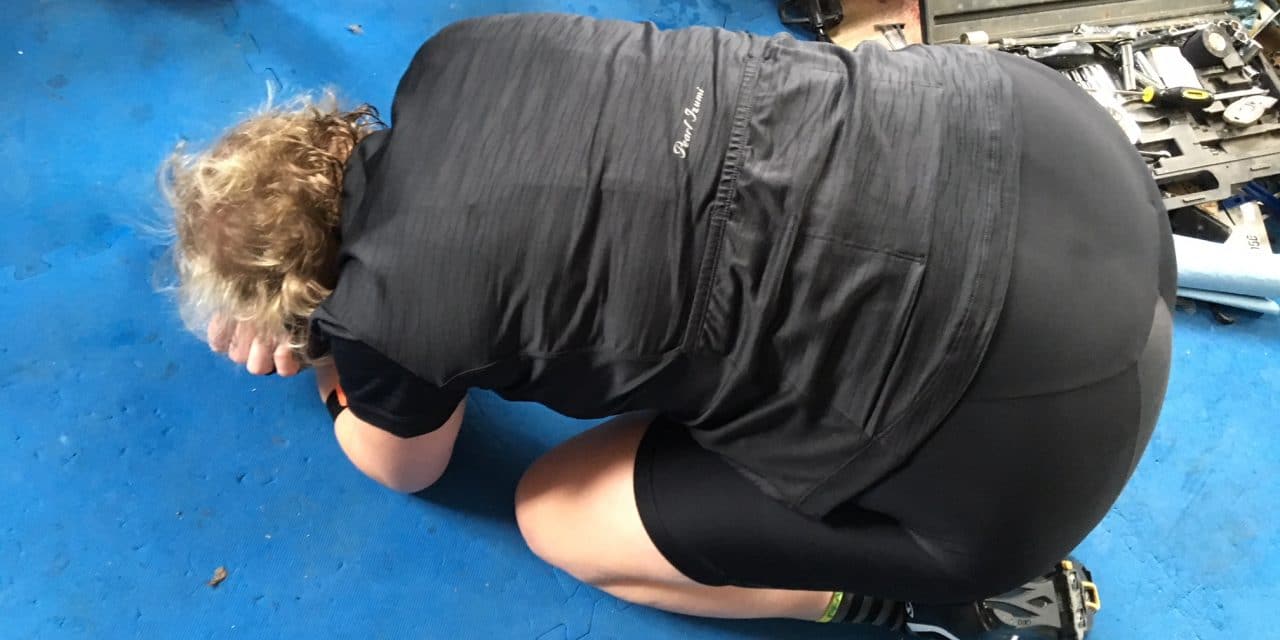 If you’ve ever put out a great effort on Zwift you know what it’s like to come off the bike feeling accomplished and exhausted. But have you ever felt broken? I hadn’t until recently.

I’ve been testing the waters of racing recently, honestly just for the sake of writing about it on Zwift Insider. So when my husband said, “You should race in the US Women’s Nationals tomorrow!” I of course said, “That’s a terrible idea. But okay!” Keep in mind I’ve only raced one other time and my FTP says I’m a Cat D (or lower, if that’s possible). 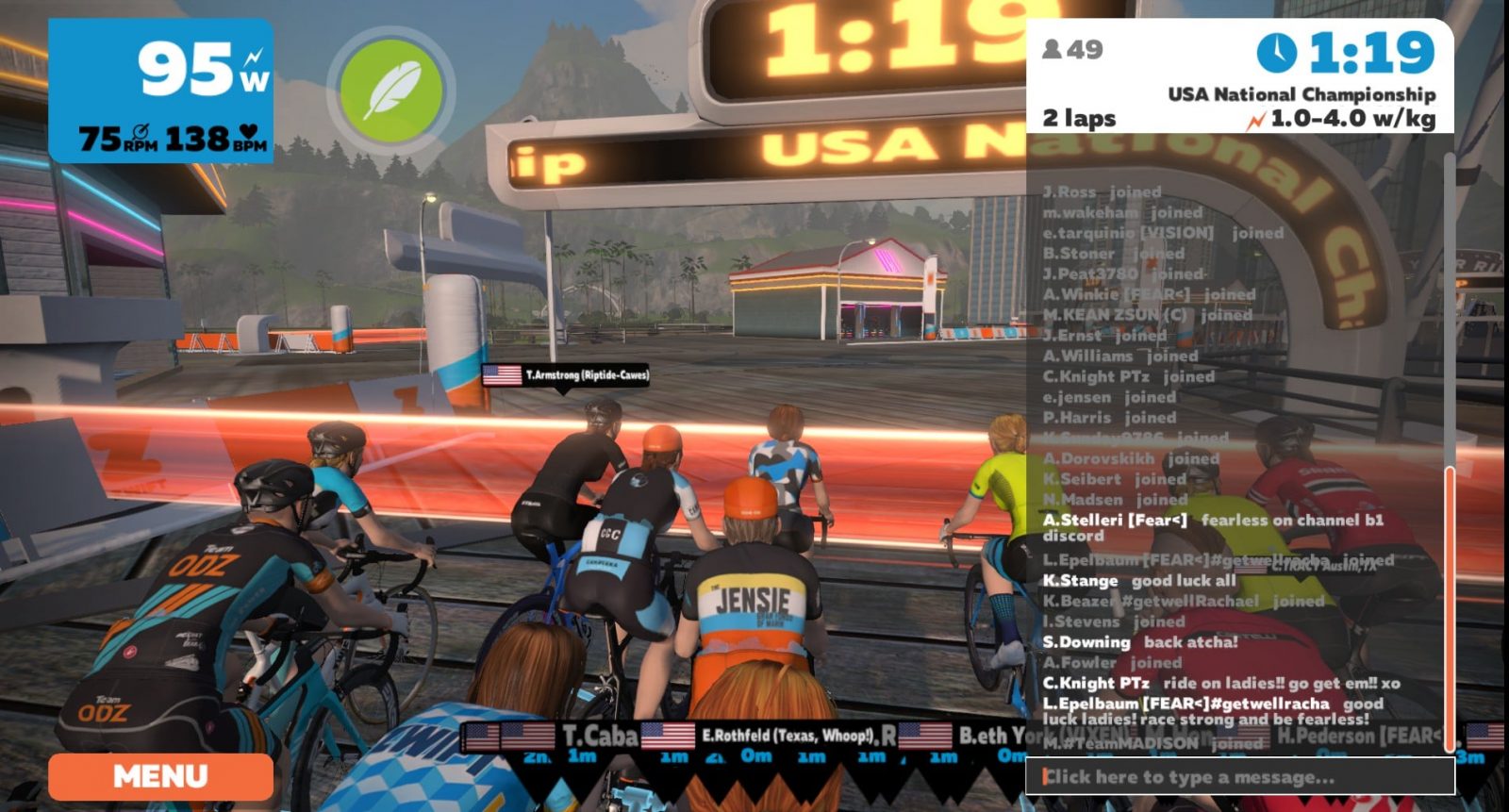 The only real requirements for the race were that you had to race in whichever race your Zwift flag was from, and you had to be able to average 1.0-5.0 w/kg. I knew I’d get crushed in the race but I also thought there wouldn’t be many opportunities to say, “I raced in the US Women’s Nationals!”

The race was two laps of the Volcano Climb route. That was exactly one lap more than I’d ever ridden. From the start I was able to stay with the front pack for a solid couple of minutes. Eric stood by my side cheering me on: “grab her wheel,” “don’t let them drop you right here,” “you got this!” I didn’t have this. I got dropped fast. I blamed my newly found practice of doing weighted squats at the gym. 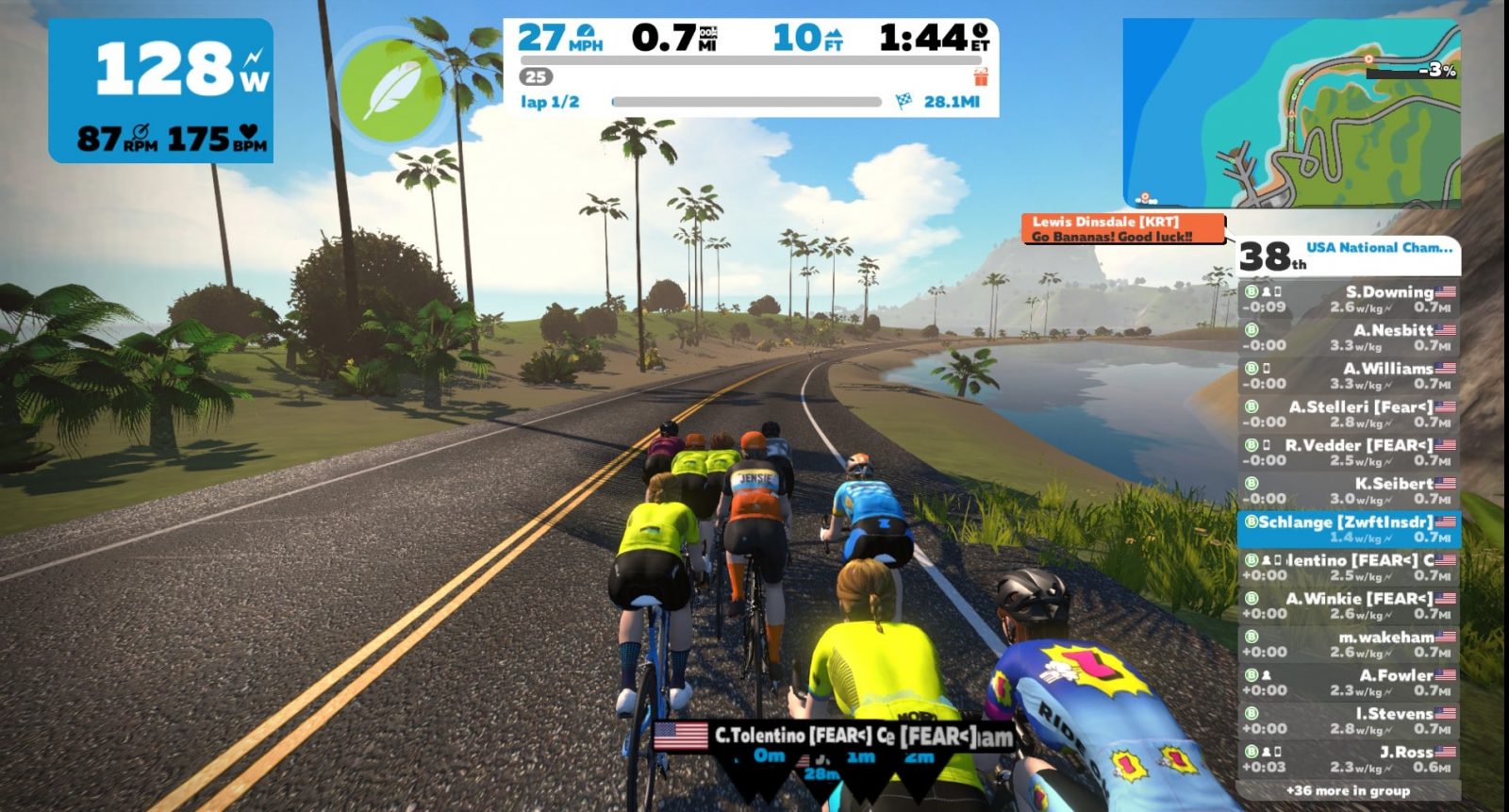 At the front… for a very short time.

8 minutes in I stopped pedaling and said, “I can’t do this!!!!” But I immediately started pedaling again knowing that I would be overwhelmingly disappointed in myself if I didn’t ride longer. I decided I’d ride for 20 minutes no matter how far back I was by then. 20 minutes at my full effort would be a pretty big deal for me, I thought. At 20 minutes I decided I might as well ride for 30 minutes.  Eric stayed with me in the garage, pretending to clean but actually just staying for moral support. At the 30-minute mark I’d give myself a new goal that was smaller than just “finish the race.” It helped a lot!

As I got closer to the top of the Volcano on my first lap the gals who were leading the race were all split up and coming down from the top. I thought it would be funny if I waved to them as they came down. I don’t know if any of them noticed but it gave me something to do to keep my mind off the fact that I’d have to do this a SECOND time! 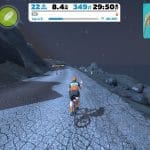 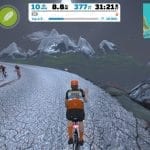 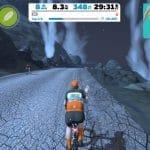 During my second lap another gal who had been behind me finally caught me. She and I pulled each other for a bit but there’s no way I could maintain her pace. I let her know I was toast so she knew she should ditch me. 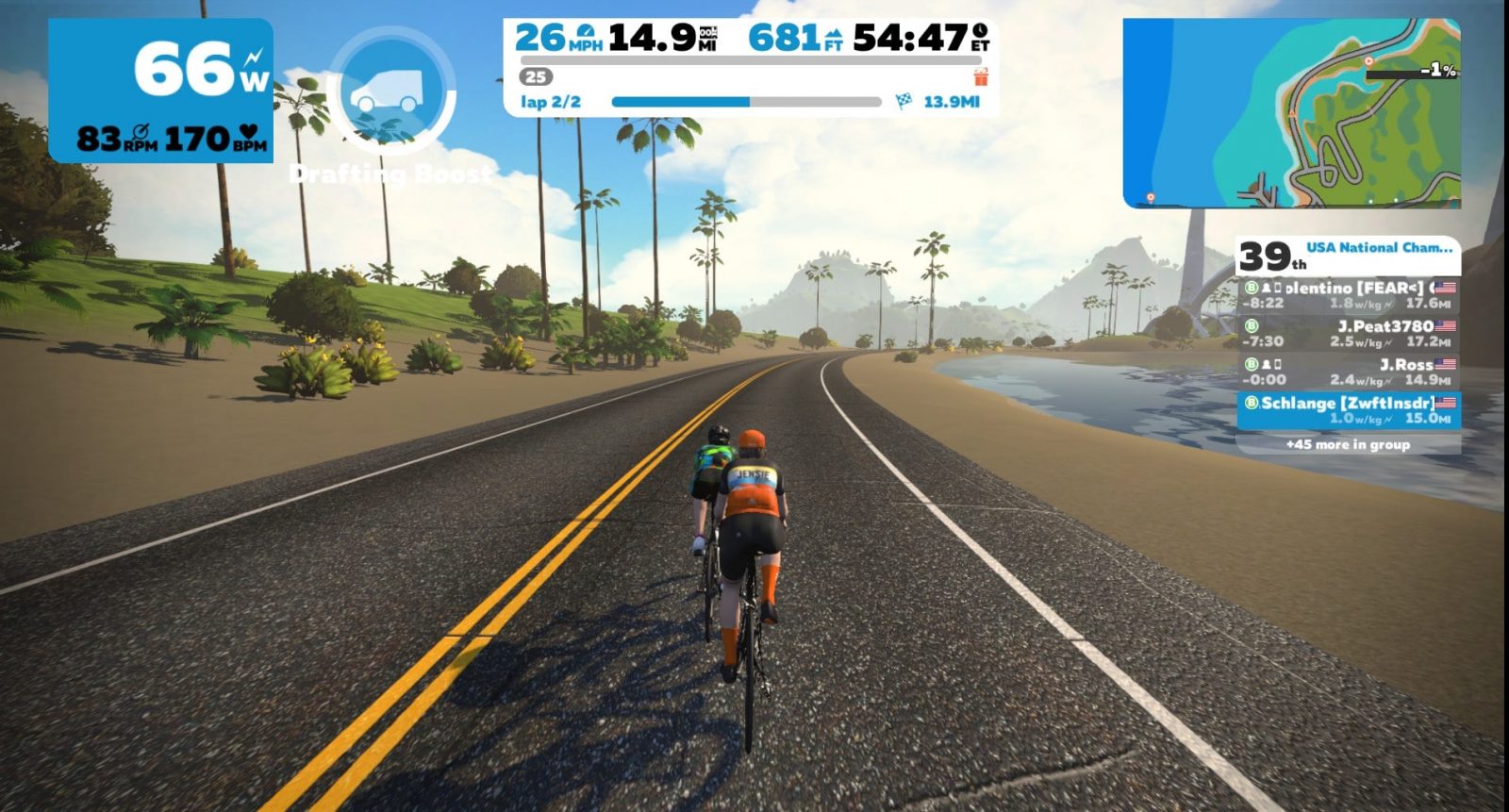 I finished my race a solid 45+ minutes after Claudia Behring won the whole thing. I came in last. BUT I FINISHED! I could barely get off my bike afterwards. When I did though I laid on the ground and cried. Bawled, actually! I think all the tough events in my weeks leading up to the race came to a head, adding to my exhaustion and my sense of sweet relief that I didn’t quit. I laid there for a long time. Sweet, sweet relief. I thought of minute 8 where I quit for a split second and was SO INCREDIBLY HAPPY that I stayed the course. 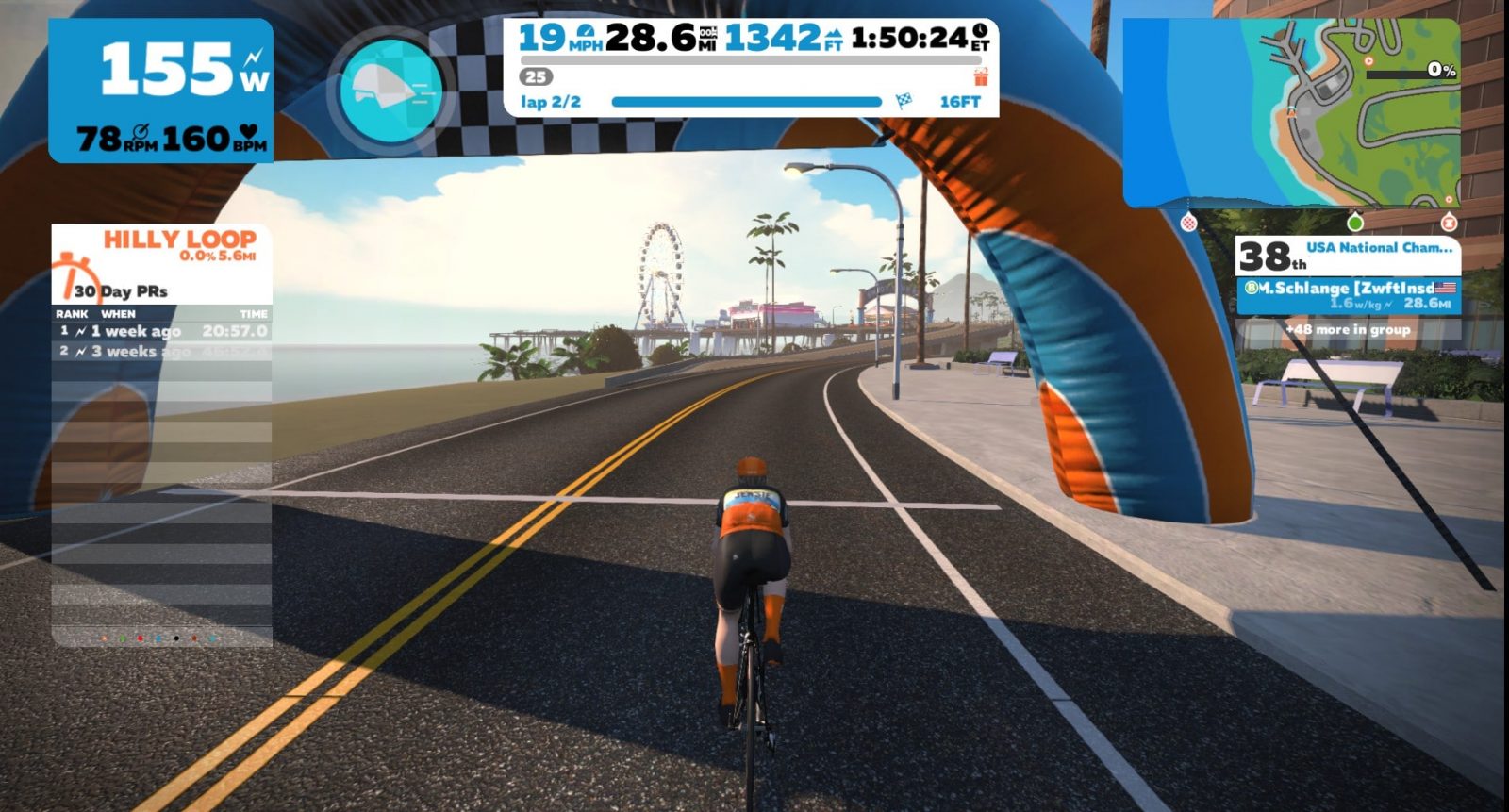 The rest of my day was spent wishing we didn’t have a staircase in our house, napping, and eating whatever I wanted. 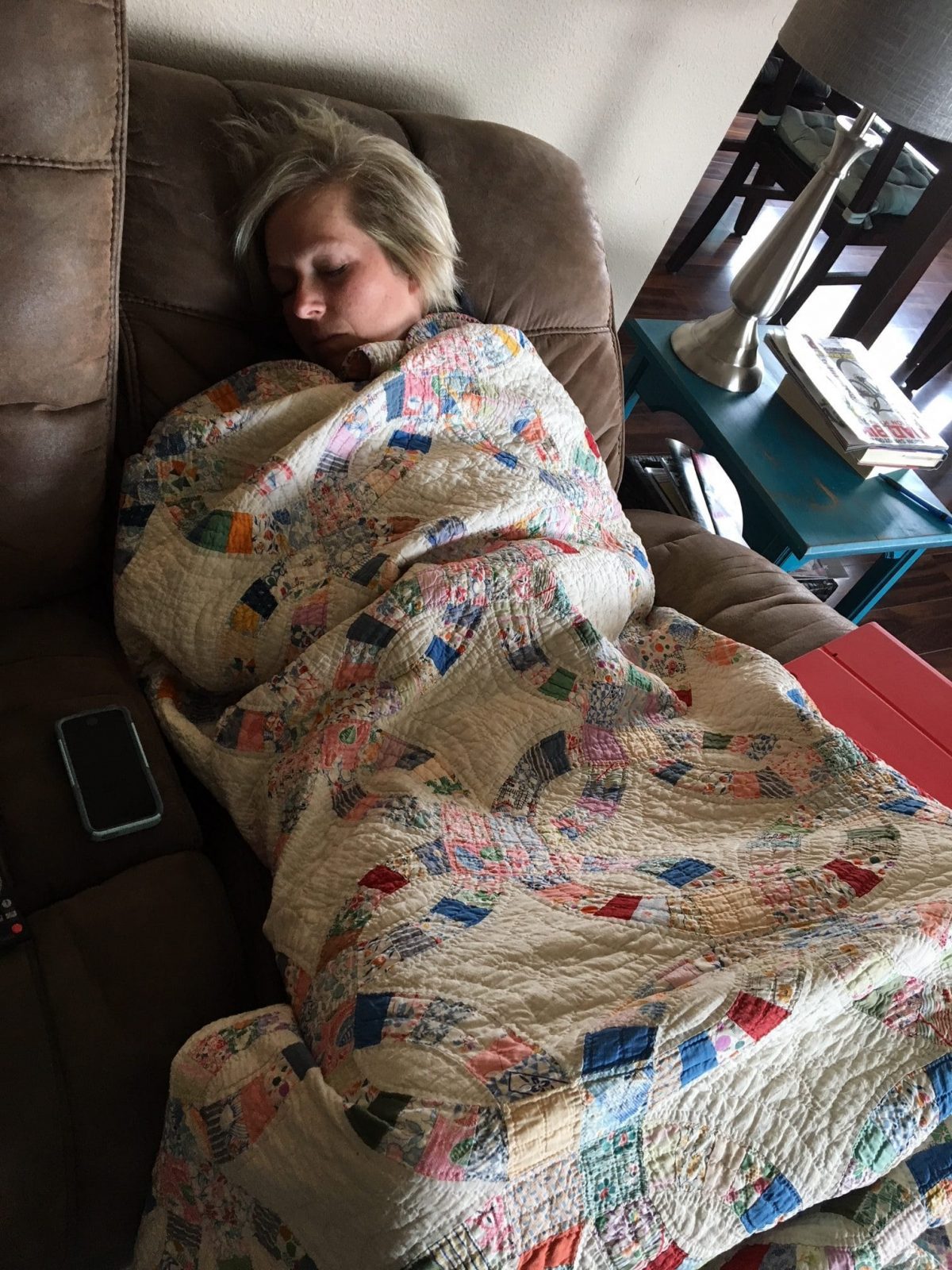 But now? I’ve not been interested in riding since then. Exercising? Yes. Riding on Zwift? No. I’m reminded of the last time I felt this. Another hard effort kept me from the bike for a solid two weeks. I know I’ll get back to it. I have a Tron bike to earn (I’m at 75%). But for now, I’ll determine not to do any more races that are beyond me. That’ll at least help my mental capacity for considering Zwifting more. 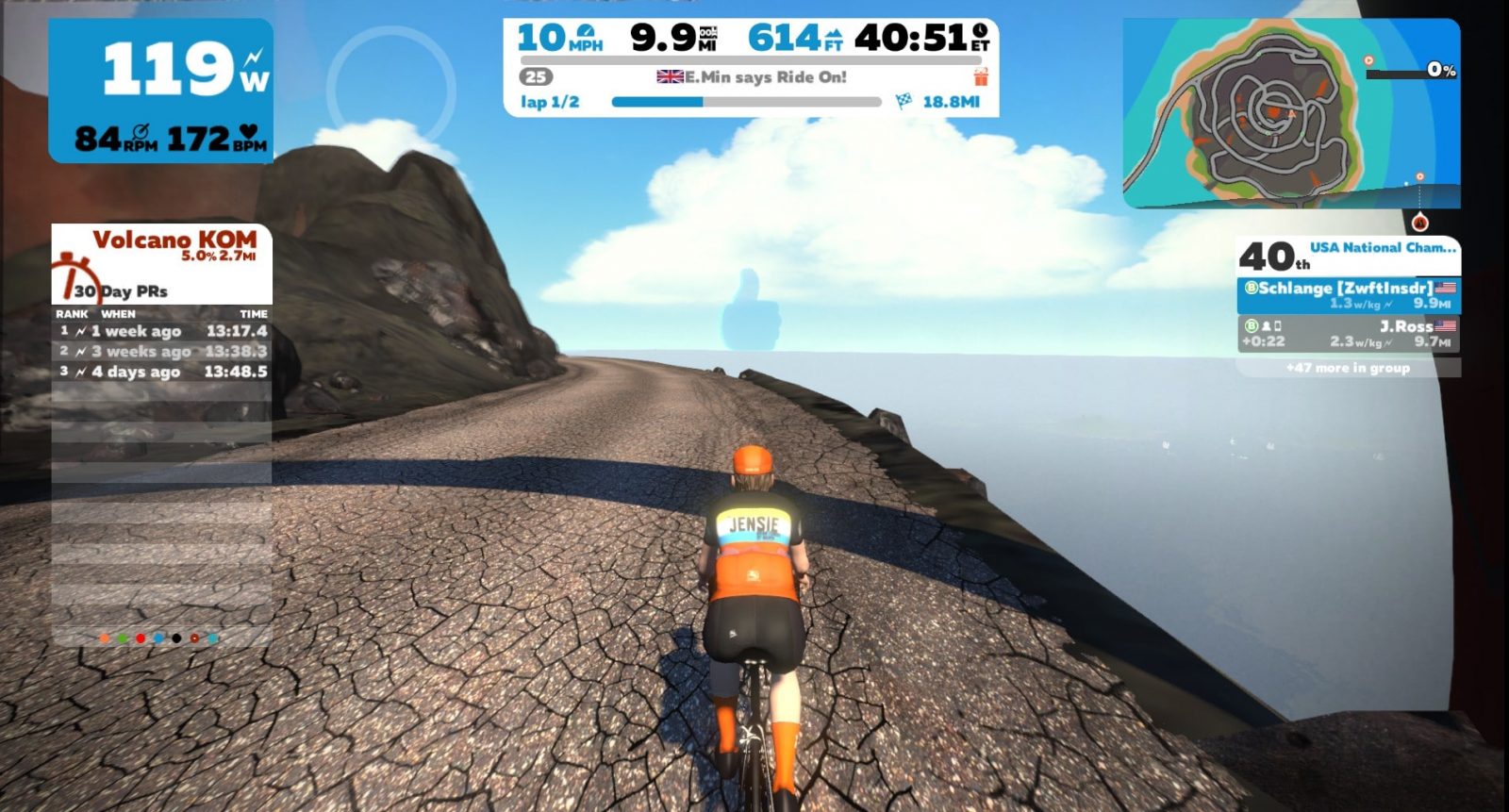 Thanks for the Ride On, Eric!