We Can All Wear the Maillot Jaune Tomorrow, Thanks to Tour de France Femmes avec Zwift 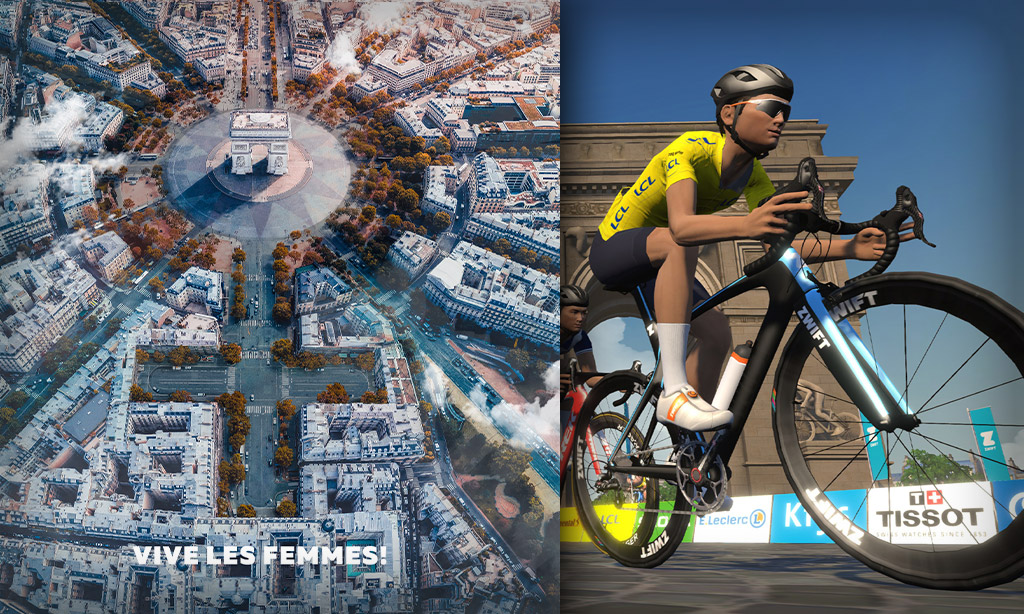 Tomorrow (October 14) the race presentation for the first-ever Tour de France Femmes takes place. To celebrate the revelation of the inaugural race’s 8 stages, Zwift is placing all riders in the Tour de France Femmes avec Zwift virtual maillot jaune (yellow jersey) over the course of 24 hours!

A number of group rides have been planned, led by CANYON//SRAM, Internationelles, and Cyclists Alliance. These rides will begin at 2am PST. (While they aren’t yet visible on Zwift’s events list, we are assured they will be live in the calendar starting at 11pm PST today, October 13th.)

Word is the rides will take place on (where else?) Paris’ iconic Champs-Élysées route.

About the Yellow Jersey

The Tour de France’s yellow jersey is the most coveted jersey in all of professional cycling. While the race is underway, one rider wears the maillot jaune in each stage to indicate that they are the current leader in the overall or “general” classification (GC).

At the end of the TdF, whoever has the lowest overall time wins the GC and takes home the yellow jersey for keeps.

The yellow jersey wasn’t always a part of Le Tour, though. When the TdF began in 1903, there was no clear indicator of who was in the lead on each stage. Here’s how Smithsonian Magazine tells the story of the first maillot jaune:

In 1919, the Tour de France returned following a four-year hiatus because of World War I. Two-thirds of the way through the race, the director of the Tour de France—Henri Desgrange—decided he needed a clearer identifier of the leader. He came up with the idea that whoever had the fastest overall time at a given stage of the race would don a yellow jersey—yellow in honor of the sports newspaper that sponsored the race, L’Auto-Vélo, which was printed on yellow paper.

As the story goes, around 2 a.m. on July 18, 1919, Desgrange gave the current leader, Eugène Christophe, the first incarnation of the jersey to take with him. But unlike its modern counterparts, this yellow jersey was made of wool, and Christophe complained that the yellow looked silly—according to historian Paul F. State, he insisted he resembled a canary.

The jersey is still used to demarcate the race leader today, with one addition: after Desgrange died in 1940, his initials—HD—were added to the waistline.

Smithsonian Magazine, “The Original Tour de France Yellow Jersey Was Made of Wool“

Want a different kit? The kit will be auto-assigned when you sign in, but you can just head to the garage to change.

If you miss the chance to wear the jersey, there will be plenty of opportunities to learn more about the race and get involved with events and rides before July 2022 when the race starts!

Very cool! If only we could keep the kit for more than one day… 😉

Carsten Re. from Germany
Reply to  Brian

On a thursday? That’ll make for some fun situations in the TTT’s 😀