Zwifters: Be Sure to Use a Steel QR Skewer 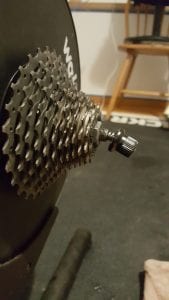 Zwifter Greig Watson recently shared an incident on Zwift Riders Facebook group which should serve as a warning to all indoor riders.

Apparently, Greig was out of the saddle sprinting for a Zwift race win when his bike came off his Wahoo Kickr smart trainer, resulting in some rear derailleur carnage. Greig was sure he had broken his dream bike, but after taking it to the shop he was happy to learn it was only a broken derailleur hanger and some scrapes on the underside of the chainstay. $100 to get things checked and fixed. No broken carbon! Greig told me:

So costly but could have been a lot worse! I’m now using my old bike on the trainer and have a steel skewer (which has survived the CHOP, so I hope it holds up).

The culprit? A flimsy quick release skewer. Greig was using the Wahoo skewer supplied by his bike shop, which was the skewer shipped with his 2018 Kickr. At first Greig thought his shop had made a mistake, but further discussion with Zwifters has brought to light that Wahoo is now shipping aluminum skewers with 2018 Kickrs instead of the heavy-duty steel ones shipped with previous models.

When In Doubt, Swap It Out

If you are using the aluminum skewer (it has a black handle instead of shiny metal) on your Wahoo Kickr (or any trainer) I would highly advise you to swap to a heavy-duty steel skewer, such as this one which Wahoo sells. Stay away from lightweight titanium skewers when riding indoors as well.

If you don’t hammer out of the saddle and you’ve got your quick release installed properly, you probably have nothing to worry about. But I would say “better safe than sorry” when you look at the low cost of a beefier skewer vs the high cost of replacing bike parts!

Also, I’ll throw a mention in here of rocking plates. I use one myself, and am quite convinced that they take a lot of the stress out of your frame for out of the saddle efforts.  You can build one yourself quite easily, or there are several solutions on the market. Check out the Rockit Launcher plans here >

Hi Eric, I noticed that they now supply a steel quick release with the 2020 Kickr but it’s still a terrible and cheap QR with a plastic external cam. Why don’t they use the beefy steel internal cam like on the Wahoo Snap? The plastic cap came off the end of mine which made aligning very difficult, I’ve thrown it away and reported it to Wahoo. A very expensive piece of training kit with a cheap piece of junk to hold the bike in!

Another cheap POS skewer failure to report. You can see the lever arm is not threaded. The captive mechanism for it is two crappy lock-washers which are supposed to fit into the groove (race) once the lever arm is pushed through the skere and cap. This is just a totally horrible design in the first place, but cheap manufacturing and poor quality control means this POS is pretty much guaranteed to fail – early ! Luckily mine failed while swapping my GF bike with mine. AND – as luck would have it, (big surprise) the spare skewer I had for… Read more »

Received my ’20 Kickr trainer last night. During the 2nd sprint interval of my first ever ride on it, skewer bent exactly like the picture and description above. Exactly. Biked ripped off cassette, rear mech ripped off the frame, scratches and damage on both stays. Other than having my bike repaired, not really sure what’s the best way to go about it with Wahoo, other than making a claim through customer service and seeing what happens. Really hoping they make it right.

Another here, brand new kickr snap and the skewer is the worst skewer I’ve seen in half a lifetime of cycling , terrible cam action and in fact the head snapped off the skewer while fitting bike for first time as I closed the cam arm. Luckily I had a tacx skewer which did the job for now. Incredible how the quality of the turbo and skewer are so badly matched, glad I wasn’t riding on it , and have asked the retailer to replace it.

Glad your bike’s ok! Thanks for the input and I completely agree. The cam action is incredibly insufficient to safely secure the skewer and the flimsy skewer axle itself is a joke, too. It really is hard to understand the mismatch of quality with trainer and QR skewer.