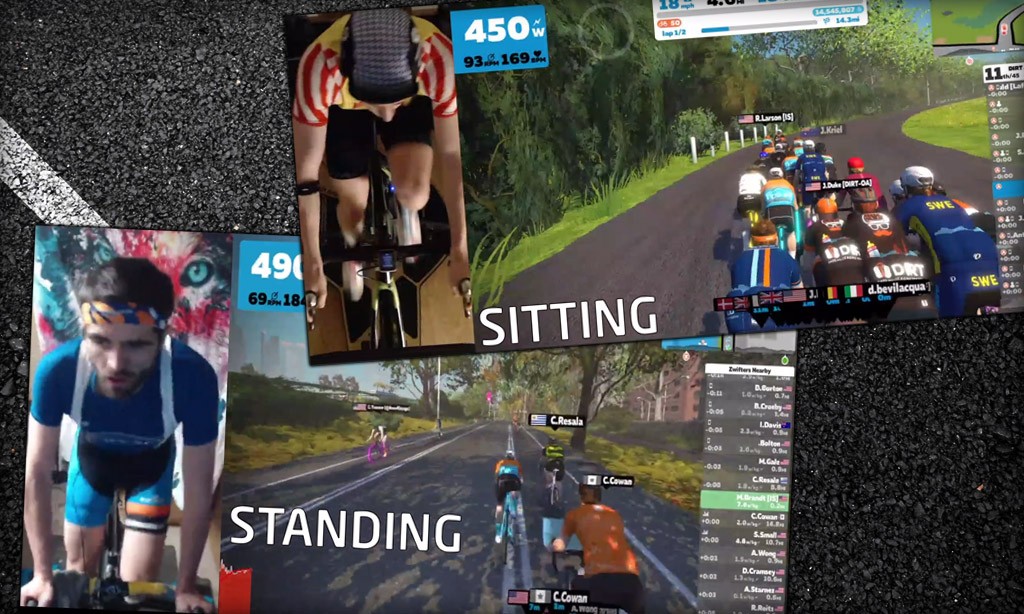 The difference between riding your bike indoors as opposed to outdoors isn’t just the scenery. Outside on the road, your position on the bike plays a very important role in determining your success: the aerodynamics of your bike and position influence your speed significantly, which is why cyclists constantly chase the perfect position and equipment. Indoors, we see almost the exact opposite. While maximum efficiency is still the goal, racers do not need to focus on aerodynamics whatsoever — maximum power production in the most comfortable riding position, regardless of aerodynamics, is everything.

This means that the choice to sit, stand, or use a combination of the two is completely up to the racer, and it’s a contentious debate among the racers on our own team!

The Case for Standing

Indoor Specialist racers Matt Brandt and Ryan Larson believe the best way to produce sustained power inside is out of the saddle. Shifting into a massive gear, lurching forward and stomping the pedals at sub-70 rpm, these two racers can stand at threshold power forever.

Ryan, a former collegiate middle-distance runner-turned-cyclist has always favored standing while doing hard efforts on the bike. “When I first started cycling, one of the hardest things for me was to get my legs adapted to spinning at around 90 revolutions per minute (rpm). The problem I was having was that my legs would get tired way before my heart rate would max out.”

Ryan found Zwift when a friend introduced it to him in 2017, and his muscle memory from his running days became his secret weapon. “When I started racing on Zwift, I could go back to what my legs were used to and use my calves and quads in a similar manner to when I ran. Since I am on the lighter side, standing also allows me use the little weight that I have to maintain a threshold much longer than if I would sit and spin. By switching my position from sitting, to hovering over the saddle, to standing straight up, I activate different muscles so I can maintain power but save the muscles I use to snap when a break occurs or when it’s time to sprint to the line.”

Ryan has used this technique to be a dominant force in the Zwift Pro-Am racing circuit in 2019 and 2020, and it’s begun to trickle into some of our other racer’s styles as well. Matt Brandt, known for his gutsy breakaway attacks, didn’t adapt to the standing technique until after seeing Ryan smash an effort out of the saddle in a race stream.

Matt has shown that this skill can be perfected by committing to practicing the effort. “I began doing standing intervals back in 2009. I was competing in UCI 1.1 races with a professional Italian road team and as the races hit the climbs, I struggled. I started doing hill repetition intervals on the famed Monte Serra climb in Tuscany, and found myself riding out of the saddle for longer and longer — until I could do the entire climb without sitting.”

It wasn’t until Matt saw Ryan dominating races out of the saddle on Zwift that the technique came back to him. “I realized: we have smart trainers that can give us the perfect amount of resistance needed. If I can get the feeling of flying-free, out of the saddle pretending my old teammate Andrew Talansky is chasing me down when I am off the front of a Zwift race, then I am 100% going to embrace that. Do what motivates you!”

The Case for Sitting

On the other side of the spectrum, Indoor Specialist racer Matt Gardiner contends that the best way to produce sustained power is seated by turning the legs over at a steady, strong cadence.

Matt, a recently “retired” long-course triathlete and time trial (TT) specialist, is pretty good at doing the same thing for a very long time. On the TT bike, that means putting out consistent power in the saddle while staying as still and aerodynamic as possible. After years of racing and riding the TT bike for triathlon, putting out power while seated has become second nature.

“For me, sitting and spinning a higher cadence allows me to pedal through fatigue — almost as if I can fake my legs into pushing more power. As long as I keep my legs spinning against the trainer’s resistance, I’ll keep up with my competitors.” Matt excels at mid-range climbs on Zwift like London’s Box and Leith Hill KOMs, and Watopia’s Volcano KOM. “I’ve always ridden climbs seated. When I joined Zwift in 2016, I worked on my climbing relentlessly after getting dropped in races when the road turned up. Every week, I would ride Box Hill as hard as I possibly could, glued to the saddle. In between those efforts, I filled my riding with workouts in ERG mode; pedaling against the trainer’s set resistance with my eyes closed.” This approach to riding has earned him success in Zwift’s Pro-Am racing series, a state championship in time trial, some incredibly fast half-Ironman bike splits, and the course record at his local monthly time trial series.

The Case for the All-Rounder

It’s clear that the indoor trainer gives racers the chance to optimize their riding style to produce the best power in every given situation. While there isn’t a right or wrong way to ride the bike indoors, we have found it could be beneficial for racers to vary their position — engaging different muscles to stave off fatigue and improve on weaknesses. A racer for Indoor Specialist who has found balance in standing and seated efforts is Tully Lyster. A former elite triathlete and current time trial weapon, Tully regularly works on seated, low-cadence efforts at high wattage, but can jump out of the saddle for long climbs: always racing with his trainer difficulty set to 100%.

“Every week, I aim to do 2 strength and endurance sessions using a climb like Watopia’s Epic KOM. These sessions usually feature three 20-minute tempo efforts seated at under 55 rpm, and one 15-min effort out of saddle at less than 50 rpm. In Zwift races, I am typically seated on the flats, but when racing hard up a climb I’m up and out of the saddle. Do what works best for you, maintaining your form, heart rate and power!”

What position do you think is optimal for races and rides indoors? Do you find yourself out of the saddle regularly, or are you a seated spinner? Share your preference and reasons in the comments below!

While there doesn’t seem to be a right answer to these questions, it does appear that there are benefits to each. Developing your riding style by practicing out of the saddle efforts or seated climbing could offer you an edge on your competition. Give your position some consideration and push yourself to try something new! 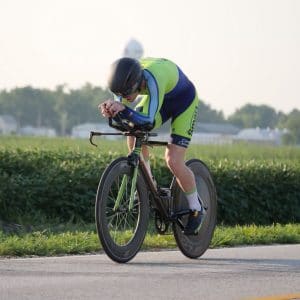 Matt is an Indoor Specialist (full-time Zwifter) who dabbles in time trialing outdoors. When he isn’t on the bike, he’s crunching numbers as a full-time CPA and spending time with his wife Kathleen. Learn more about Matt >

I make a purpose effort to try and ride my bike indoors that would benefit me most when riding/ racing outdoors. Apart from when sprinting as due to the tight space it’s hard for me to get over the front wheel on the drops!

The commentators to the Swedish cycling federation cup were amazed that many racers including Samuel Brännlund and Per Bäcker, the 2 highest ranked Swedish zwifters, had cadence 55-70 during the races. They were both old cyclists and thought 90-100 was optimal.
I personellt struggle above 90. After seeing so many others perform good at lower cadence I have stopped trying to adapt to high cadence.
Grinding FTW!

Well, standing efforts (uphill) are less efficient. Some can handle the load better, but the biomechanics doesn’t lie, seated is more efficient, so the target should be to stay seated and either grind or spin. “The results obtained by Millet et al. (2002)
showed that there are no signicant differences in
economy during uphill cycling (seated and stand-
ing) compared to level terrain. However, heart rates
were found to be higher (6%) during standing uphill
cycling as opposed to the seated position” https://www.researchgate.net/publication/235634878_Biomechanics_and_Energetics_of_Uphill_Cycling_A_review

Most of my riding is seated, but short races and tough climbs are out of the saddle for sure. I can hold much higher watts for longer at 60rpms standing up than sitting. Sure- 45 minutes of out of the saddle to climb Alpe du Zwift hurts, but that’s the key for me to getting up it that fast.

I ride a TT bike. I’ve always been mostly a spinner outside. However in Zwift I mix it up more depending on what’s going on with my legs and HR. I gring it by default online, but I’ll spin it up when I have HR capacity left but my legs are torqued out.

Hi Matt, While hooked up to Zwift and my Wahoo Kickr, my watts will drop to zero multiple times during a 30 or 60 min ride. I lose up to 8-10km/h each time and takes maybe 30 seconds to get back up to speed. My watts, cadence and speed are all high enough (200+, 90 & 31kmh) but this happens at any range or combination. Been doing this now for months. I have uninstalled & reinstalled Kickr, Zwift and Zwift companion software, removed cache, ran many spindowns. I’m running Windows 8.1 on a powerful gaming PC. I also made sure… Read more »

Try getting a ANT+ dongle and a USB cable (possibly an active USB cord) to move the transmission closer to your kickr. Had similar drops, very frustrating

This is a great article. I’d love to read more about how indoor training compares to outdoor and other activity, and tips and ways to adapt. I’m a sub-elite runner who uses Z for xtrain and inj recovery. I too have difficulty matching leg fatigue, power, and HR. Legs give out well before cardio. Encouraging to read low cadence is “acceptable” on trainer.

I prefer standing to climb, both indoor and outdoor. I will still vary sitting and standing for longer climbs, but I use sitting more as a change of pace and spend most of the time standing.

I have better results on the trainer by staying seated and grinding at 80-85rpm for sustained efforts. For sprints, I just up the resistance and cadence, but stay seated. On climbs, once I pass the summit, I’ll lower my cadence and get out of the saddle on the descent to stretch a bit. Unrealistic, but practical, especially in races.

Save & Accept
11
0
Would love your thoughts, please comment.x
()
x
| Reply
Comment Author Info
You are going to send email to
Move Comment